Globally-speaking, pre-owned aircraft sales have been frenetic throughout 2021. Could the same be said of the pre-owned helicopter market in Africa, though? Rebecca Applegarth asks specialists Mark Watson, Bruce Johnstone and Nic Dorfling…

What's the latest on the helicopter marketplace in Africa? Three aviation experts based on the continent share their perspectives...

Traditionally, the helicopter market in Africa has been slow. Fixed-wing aircraft, such as Cessna’s Grand Caravan are popular in the region as they are ideal for supporting tourism to game lodges, or for farmers operating out of gravel strips, according to Bruce Johnstone, Sales Director at South Africa-based Absolute Aviation.

“We have not seen the boom in helicopter sales as evidenced in the fixed wing market,” Johnstone summarizes. “There may be a lag-effect here, but fixed-wing sales are soaring globally, and this has not yet manifested in the helicopter world.”

But that doesn’t mean to say that the popularity for rotorcraft within Africa hasn’t been growing.

“With the diversity of the Southern African market, helicopters can play a major role in different sectors of the market,” explains Nic Dorfling, Chief Operations Officer at Money Aviation, based in South Africa. For example, “the helicopters in the light utility market are often operated in the game capturing, farming, and mining industries.”

And with an array of applications available in the turbine helicopter market, rotorcraft are often also used for site-seeing, aerial work, firefighting, and more.

During Q2 2021, for example, South Africa-based Safomar Aviation delivered the third of three Enstrom 480Bs to the Botswana Police Air Wing, which company Sales Executive Mark Watson considers “a massive success”. Safomar’s short-term goal will now be to ride the wave of that success, focusing on the Military and Police sectors within the South African Development Community (SADC) regions.

According to Watson, “The VIP market is more difficult to penetrate” because it is smaller. “But the trend for privately-owned and operated helicopters is becoming more popular.”

Johnstone agrees – in a “private capacity, helicopter popularity has grown over the last decade, and this has long been driven by the availability of more cost-effective options for private buyers.”

So what is it that helicopters in particular can offer in Africa that is contributing to their increase in popularity? According to Dorfling, turbine helicopters have increased functionality when compared to many of the first world countries and regions, owing to Africa’s unique environment- both geographic and political.

“Africa often presents the challenge that travelling between two points is quite simply unsafe”, Johnstone says. “Unfortunately, this is a significant challenge in many areas of our continent.”

“Africa – though not so much South Africa itself – has infrastructure constraints as a result of corruption, poverty, and more,” Watson agrees. “Helicopters therefore become vital in various applications, from mining, offshore rigging, fire-fighting, security, crop spraying, and game counting or capture.”

“Many private flyers choose to use helicopters due to the increased access and ease of landing sites,” Dorfling explains. “One of the primary advantages of travel by helicopter is the flexibility on the departure and arrival locations,” and the fact that they offer access to a variety of remote locations that couldn’t be reached with a fixed-wing aircraft.

It’s the additional functionality of helicopters that influences the buyers’ market, Johnson suggests. “The helicopter world fulfils a variety of functions with some overlap in roles – including transportation of people and cargo, firefighting, Search and Rescue, tourism, medical transport, Law enforcement, agriculture, news and media.” It is quite feasible for a helicopter to serve a multi-role purpose. 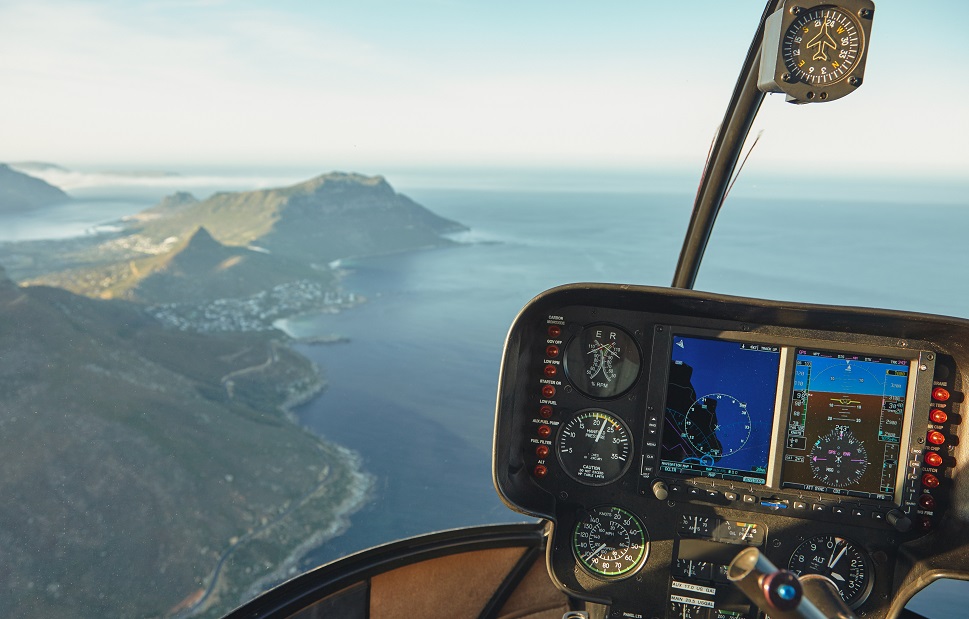 Potential for Market Growth in Africa

Fixed-wing aircraft still dominate the pre-owned market in South Africa, according to Watson, but Safomar Aviation is currently on a huge drive to secure students from Botswana, to as far afield as Egypt and India to enrol in its helicopter flying school. “These students in turn all become our future helicopter customers,” he explains.

Dorfling believes there will always be a healthy demand for rotorcraft in Africa. “Over and above, the flexibility offered by helicopters is a major factor”, selling the helicopter over the jet or turboprop, he argues.

While fixed-wing aircraft do also serve in many of the sectors rotorcraft serve, Dorfling expects there will always be a requirement for short trips, without runways.

“From a commercial perspective the helicopter has a number of very unique and dedicated roles which, for as long as security remains an issue, infrastructure remains under-developed, and access to remote areas (especially in the mining industry) is required, will ensure rotorcraft demand develops,” Johnson predicts.

Equally, Watson expects that turboprops will “always have their niche market here in Africa” owing to the access they provide to remote airstrips. “Although Covid has had a huge impact on tourism in Africa, and with the demise of several of the big passenger carriers, clients are now looking to charters all around the country and into Sub-Saharan Africa.”

“The ever-growing demand” for helicopters in Southern Africa bears witness to the convenience they offer over fixed-wing on the continent, Dorfling concludes. And that convenience ensures there will always be a healthy slice of market share for turbine helicopters in Africa.

Choosing Your African Aircraft Management Partne...
A Buyer's Guide to Turbine Helicopters in Africa
Tips for Converting Helicopters for Corporate Us...