With six locations throughout the UK and over 10,000 hours a year in combined helicopter flight time, Heli Air knows a lot about personal helicopter safety – that’s why they put their trust in Genesys HeliSAS.

Avionics for General Aviation
AvBuyer  |  30th May 2017
Back to Articles 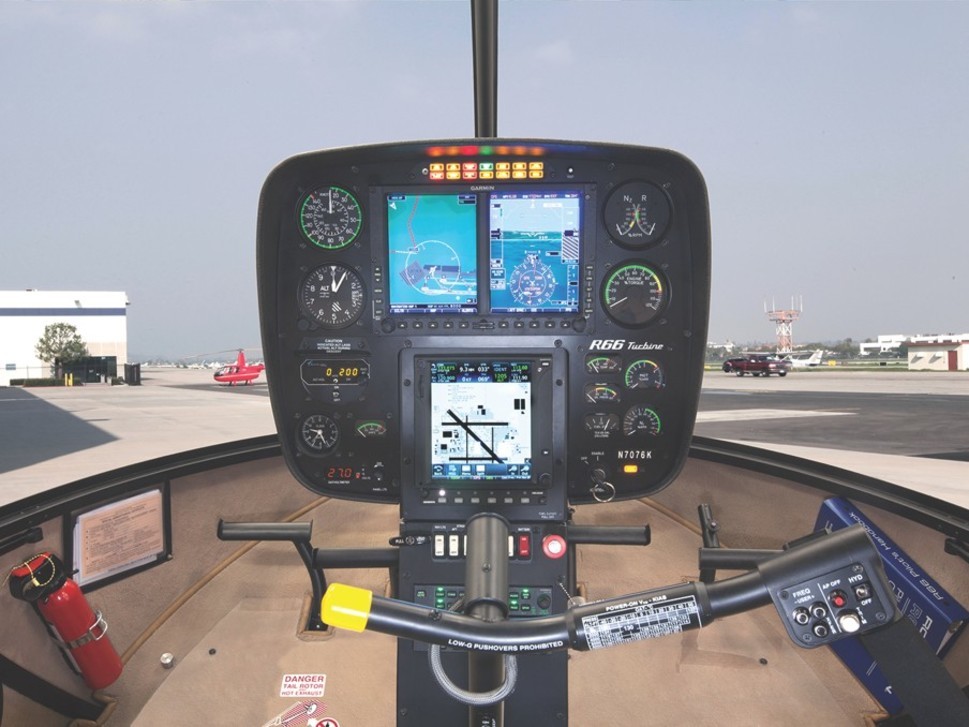 Light helicopters are an exciting challenge to fly, but as with all aviation, when unforeseen problems develop, your workload can become greatly increased.

That’s why Wycombe Air Park-based Heli Air has many of their advanced Robinson R66 turbine helicopters equipped with the HeliSAS Autopilot and Stability Augmentation System from Genesys Aerosystems.

“When we introduced the turbine R66s in 2011, we were the first operators of the type in Europe. Today, our fleet of R66s are used for a variety of commercial applications, public transport and aerial pipeline inspections, as well as advanced flight training,” explained Heli Air’s Managing Director, Richard Packe. “In addition, the R66 has also proven to be very popular with private helicopter owners.”

And whether its rotorcraft are providing commercial work, pipeline patrol or flight training, Heli Air strives to ensure that its helicopters offer pilots and passengers the safest flight possible. That’s why they have Genesys Aerosystems HeliSAS Autopilot and Stability Augmentation System on three of their Robinson R66s.

The reason for upgrading your R66 or R44 with HeliSAS is simple, Packe explained, “for the added safety benefits of reducing cockpit workload for both commercial and private pilots.” He said, “As a leading sales distributor for Robinson Helicopters, we have seen how the private, single-pilot helicopter owner benefits from the reduced pilot workload.”

“We also wanted to offer modern helicopters, which will introduce students to this type of advanced system early on in their training so they are better prepared should they decide to pursue a career flying larger helicopters,” added Brian Kane, Heli Air’s Director of Sales and Marketing. “The easy-to-fly HeliSAS is the perfect complement to the Aspen and Garmin glass panel avionics we have in our R66 helicopters.”

According to Jamie Luster, Genesys Aerosystems Director of Sales, the system’s advanced capabilities reduce single-pilot workload, while providing precise control of the aircraft during all modes of flight – regardless of wind conditions or shifts in the aircraft’s weight.

“From the second you lift off, HeliSAS acts as a full-time copilot whose ‘hands never leave the controls,’” she said. “Should a pilot become disorientated, all they need to do is to loosen the hold of the helicopter’s cyclic and HeliSAS will automatically return the helicopter to straight-and-level. That gives the pilot time to regain his or her bearings before taking back full control of the aircraft.”

“With the addition of the two-axis autopilot option, HeliSAS provides a full array of workload-reducing capabilities including altitude hold and NAV hold,” Ms. Luster stated. “Additionally, should a VFR-rated pilot encounter IMC, they can easily command a 180-degree turn by simply using the HeliSAS heading control and inputs from the helicopter’s HSI or EFIS.”

“Pilots initially struggle with loosening their grip of the controls, but soon recognize the robustness of the HeliSAS system and immediately trust it to fly the helicopter,” she said. “That frees them up to do tasks like tune the radios, read their map, scan for traffic, or just sit back and actually enjoy the scenery and fun of flying a light helicopter.”

While the Genesys HeliSAS is an incredibly capable and affordable system, it is also very compact and lightweight, which helps make the system’s installation easier for Heli Air’s in-house engineering team.

“On the R66, the system processor and roll servo system is installed under the pilot’s luggage compartment and the pitch servo forward of the cyclic stick assembly,” explained John Michalakis, Technical Director for Heli Air. “Genesys supplies the wiring harness as complete assembly and attachment hardware. We also have to route wiring up the cyclic stick and pitot and static signals to the processor, but all told the installation is pretty straightforward.

A view from the right seat.

So what is it like to fly with HeliSAS? “Our pilots love it because it works very well in all phases of flight. Also, it is very responsive compared to other systems, and it is very reliable,” Michalakis said. “It is a wonderful aid in the cockpit to help reduce pilot workload. I had the opportunity to personally fly an R44 across Europe back to Greece and the HeliSAS made flying a lot safer as cockpit workload reduced dramatically.”

“We recently took our R66s on an extensive demonstration tour around the UK and gave hundreds of demonstration flights to prospective customers,” Packe said. “The majority of these pilots were private individuals and absolutely loved the added safety benefits HeliSAS brings to the R66.”

Of course, sooner or later, clients want to know what HeliSAS costs. “The compact HeliSAS was originally designed for the Robinson platform, so while saving weight and cost was a major consideration during the design process,” Ms. Luster said, “we knew how beneficial the systems would be and wanted to ensure most owners could afford the potential lifesaving features HeliSAS provides.”

Kane said, “Our customers are both private and business owners who put a very high value on safety, so HeliSAS is something they are very interested in having aboard their Robinson helicopter.”

Come to Heli UK and see HeliSAS for yourself.

If you’re interested in the safety benefits of HeliSAS or just want to see all the latest in helicopters and helicopter technology, you don’t want to miss Heli UK Expo, June 1 through 3, at Wycombe Air Park.

“We will have all three of our HeliSAS-equipped Robinson R66 helicopters on display during the event,” Kane said. “Two of them have the Garmin Avionics panels and one has the Aspen Evolution EFIS.”

“We’re also inviting any current helicopter owner/operators to come to our Wycombe Air Park headquarters during the show and pick up free passes to the event,” he added. “It’s our way of saying thank you for helping to make it a success.”

If you would like to book a demonstration flight of the HeliSAS system, contact Brian Kane at Heli Air to choose a suitable date and time.  +44 7831 762500

For more information about the Heli UK Expo or any of Heli Air’s services, please visit: www.heliair.com. Or phone: Heli Air Main Switchboard: 01789 470476