All you need to know about CPDLC - ATN-B1 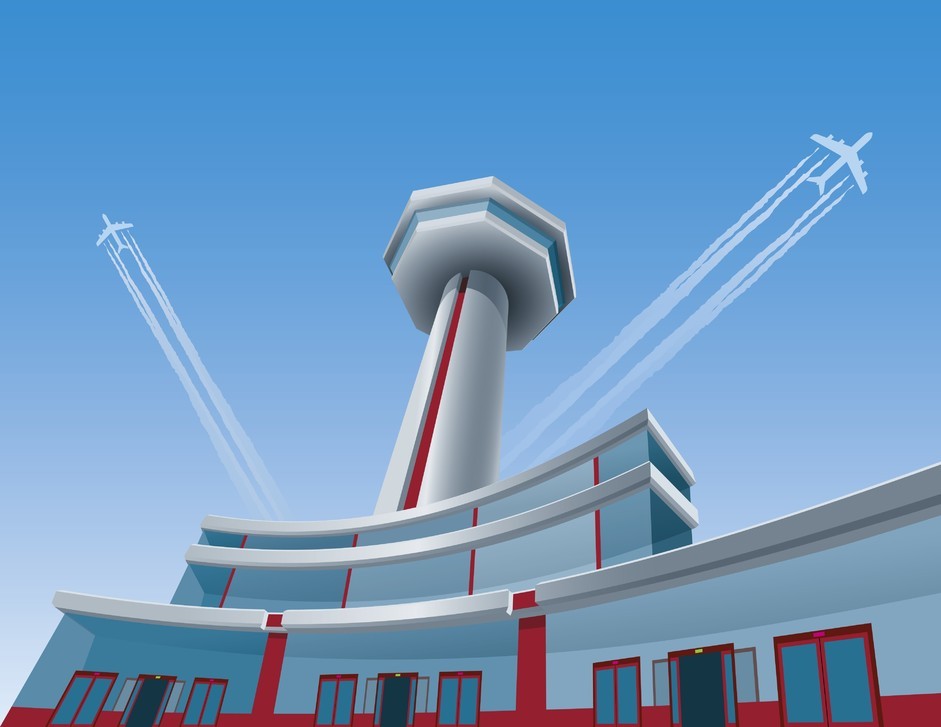 Data Comm encompasses two main areas: ATN-B1 (or CPDLC) and FANS 1/A+ (including ATN-B2). It can be confusing when confronted by a string of unfamiliar letters. The reader requires either an avionics glossary to crack the code or a degree in aviation technology (possibly both) to understand the alphabet soup. Controller-Pilot Data Link Communications (CPDLC) is one of those codes, and it is best understood by an introduction of its history.

Like most technologies, CPDLC began with a need to solve a problem and progressed through a series of gradual piece-meal steps toward a seemingly eternal resolution in an environment where goalposts are constantly shifting. Historically, signs of frequency congestion emerged in the 1980s. Primarily the problem applied to frequencies allocated to Air Traffic Control (ATC) sectors and to the Aircraft Communications Address and Reporting System (ACARS).

Sector frequencies manage enroute flights, and ACARS covers messaging data between aircraft and ground, both for ATC and Airline Operations Control (AOC). There were concerns of voice communication language barriers and overlap where an ongoing ATC and aircraft communique could be overridden by another transmission. Communication (including data) was via Very High Frequency (VHF) and High Frequency (HF).

The VHF congestion was partially resolved by implementing the use of 8.33 KHz spacing, narrowing the gap between assigned frequencies and providing many more channels. HF, meanwhile, is gradually being replaced by Satellite Communications (Satcom), operating at much higher frequencies. HF, including HF DataLink (HFDL), has its own limitations, mostly regarding poor quality of the signal, voice distortion and overall reliability of service.

The need for a solution grew greater with significant expansion of air traffic. Furthermore, there was a need to standardize two way communications between ATC and aircraft as well as the data that are automatically provided from an aircraft to the ground. Because airlines were already established with ACARS, there was a need to consider both existing and new equipment, as well as operational requirements.

The combination of these factors and the divergent interests of different aviation governing bodies has created a background of confusing terminology, coupled with a potpourri of data comm timelines.

In 1983 ICAO began an effort to establish a DataLink architecture under its Future Air Navigation System (FANS) structure. This became the architecture and protocol standard of an oceanic communications network, where HF and early Satcom ruled. Boeing, a long time user of ACARS, developed FANS-1 to the newer ARINC 622 binary data format, followed by Airbus with its FANS-A. Later these were combined and have since evolved into FANS-1/A+.

Boeing (FANS-1) incorporated the principles of Automatic Dependent Surveillance (ADS) and early CPDLC using the existing ACARS. Note that ADS is automatic surveillance such as position reporting, and CPDLC is communication using text in the form of data, not voice, for clearance requests and authorizations.

ADS for FANS is known as ADS-C (ADS Contract) and allows an automatic handshake by contract between the aircraft and enroute ATC for DataLink. This is different from ADS-B (ADS Broadcast), which uses GPS/FMS and Transponder technology to provide flight and position information that is broadcast as “OUT” data to ATC and aircraft with receivers that have “IN” capability.

Meanwhile, specifically for CPDLC, ICAO continued its separate FANS effort based primarily on newer Aeronautical Telecommunication Network (ATN) protocols and standards. This development also became known as ATN-B1 (Baseline 1). Having a CPDLC architecture that was based on universal International Standards (ISO) subsequently provided a continental-based DataLink platform, which was different from the oceanic system due to the high density of airspace and users in continental airspace.

This newer DataLink structure known as CPDLC VHF DataLink (VDL) Mode 2 was eventually adopted by EUROCONTROL for use across continental Europe under the final program designation of LINK 2000+ (otherwise known as FANS-2). VDL Mode 2 has a much higher and faster data capacity than the existing ACARS.

The term FANS is typically linked to oceanic airspace and today includes both a Data Comm and surveillance component. On the other hand, the term CPDLC or ATN-B1 covers continental operations where, because of transponder and radar coverage, surveillance is not a requirement. However the US is beginning to implement FANS 1/A+ over VDL Mode 2 for its continental airspace while traditionally ATN-B1 is linked to continental European operations. Requirements are often referenced as ‘CPDLC’ for LINK 2000+ and ‘FANS 1/A+’ elsewhere. Remember that requirements are based on what you need to operate in certain airspaces. Typically, mandates are higher level requirements that apply to almost all users in much larger 3D airspaces.

It is important to highlight the link between Data Comm and the wider modernization of airspace.

Data Comm development, and especially its implementation, is becoming fully integrated with other NextGen programs aimed at Trajectory Based Operations (TBOs). Aircraft and equipment programs supporting NextGen often combine FANS 1/A+ for oceanic use, with CPDLC for Link 2000+ as well as ADS-C and ADS-B capability. They are even now designing for ATN-B2, FANS 3/C. 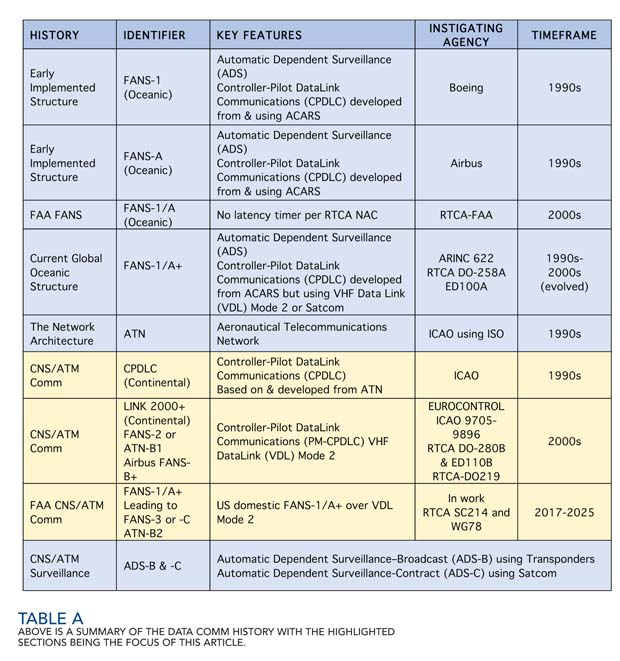 Link 2000+ is a key element of the Single European Sky (SES 2+) initiative adopted in March 2014 after several iterations, and now accommodates users already equipped with FANS 1/A+.

Protected Mode (PM-CPDLC), used by Link 2000+, allows the flight crew to select from a menu of standard ATC communications to send and receive messages via text. A corresponding application exists for ATC Controllers. PM-CPDLC is an up-to-date version of CPDLC that minimizes messaging errors, protecting communication data both ways. PM-CPDLC has higher integrity than FANS 1/A+ CPDLC, verifying entire messages that are received by the intended recipient.

Link 2000+ ground services are provided out of several control centers offering DataLink services on a 24/7 basis to all aircraft equipped with the appropriate avionics in the upper airspace (above FL 285) and include:

Typical messages to and from ground stations are:

The following underlying protocols are applicable to CPDLC:

- Voice and DataLink shall co-exist as a means of ATS communication. CPDLC supplements voice.

- CPDLC shall only be used in the context of non-time-critical communications. Time-criticality is determined by the ATC traffic situation, systems and flight crew/controller response time and recovery time. A voice response is generally expected in a few seconds, while the latency of CPDLC is usually much longer (up to several minutes).

- The decision to use either voice or CPDLC shall be at the discretion of the controller and/or pilot involved.

- A controlled flight shall be under the control of only one ATC unit at any given time.

User guidance for Link 2000+ is Flight Crew DataLink Operational Guidance – Version 6, available from the EUROCONTROL website under Link 2000. There are no Letter of Authorization (LOA) requirements for Link 2000+ and training is the responsibility of the operator. Note that there have been a number of Link 2000+ disconnections (Provider Aborts) reported, and while this anomaly is being resolved there is a White List where certain aircraft (and equipage) can be added. This is a complex issue beyond the scope of this article. More information can be found at: https://www.eurocontrol.int/link2000/wiki/index.php/White_Lists. 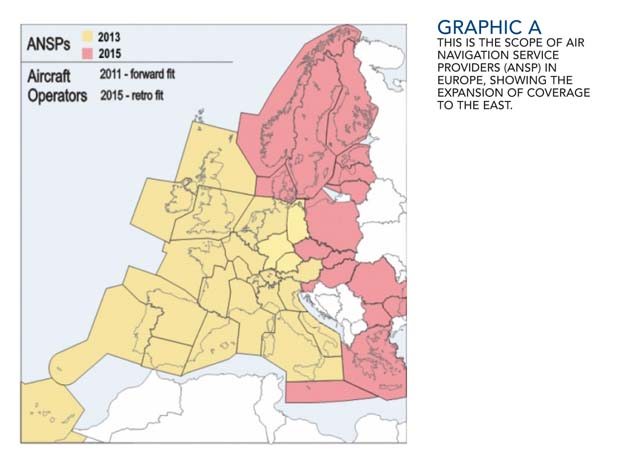 Depicted in Table B is the current EUROCONTROL requirement for ATN-BI or CPDLC over VDL Mode 2 (see note 2 below and see also italics under Equipage*). In summary, the mandated requirement is:

- 1 January 2011: All new aircraft operating above FL285 must be equipped with a compliant system

- 5 February 2015: All aircraft operating above FL285 must have been retrofitted with a compliant system (see Note 2, below)

+ Note 1: Aircraft equipped and operationally approved for FANS 1/A+ before January 1, 2014 are exempt specific LINK 2000+ requirements

+ Note 2: Due to delays in ground station readiness, retrofit requirements are postponed until late 2015.

The FAA plans to start implementing FANS 1/A+ technologies in domestic airspace as early as 2015. Data Comm will be used for clearances over VHF VDL Mode 2, which is faster than the existing VHF network. This allows for pre-departure clearances and reroute requests. The FAA had previously updated its Data Communications plans in response to an RTCA NextGen Advisory Council (NAC) recommendation to not require domestic use of a latency timer. This is reflected in FANS 1/A instead of FANS 1/A+.

Among other efforts between 2002 and 2004, the FAA undertook a CPDLC pilot program out of Miami Air Route Traffic Control Center with American Airlines. Since 2012 the FAA has embraced a dual stack aircraft structure having both FANS 1/A and ATN-B1 Data Comm systems installed with the goal of seamless operations (FANS 1/A+).

Also the FAA is working with industry to revise installation and operational guidance for ATN-B2, currently nearing completion. This is expected to create full participation from airlines and General Aviation, but expect it to be an evolutionary process.

Today, limited CPDLC-based data services are available in the US (such as initiated ground clearance via CPDLC at some Towers and 30/30 RNP4 with CPDLC/ADS-C at Anchorage). Incidentally, CPDLC continental-based services are also available in Canada, Australia and Africa. Recently RTCA has been contracted for advice on NextGen services, including Data Comm, in South America. In fact, CPDLC as VDL Mode 2 is fast becoming a worldwide data standard.

Because many of the CPDLC or ATN-B1 solutions today include FANS 1/A+ for both oceanic and continental operations, actual equipage will be covered in depth in the next month’s article focusing on FANS.  It is, however, helpful to point out that as part of the equipage considerations for CPDLC or ATN-B1 there are existing DATALINK RECORDING requirements for new aircraft:

From a general perspective, new aircraft orders are increasingly compliant, only requiring minor bulletin changes for CPDLC implementation. Older legacy aircraft may require significant changes. Regulators are working hard to minimize equipage requirements. The FAA, for one, is making it very clear the agency intends to continue supporting ACARS, VDL Mode ‘0’ for towers and importantly FANS 1/A + equipped aircraft that include a message latency timer or monitor.

In fact, the FAA is working hard not to require minimum equipage and to work diligently on ATN-B2 in an advanced form, with its final implementation date of 2025. Installation providers may be found listed in the January article of this publication (pages 56-57).