All you need to know about enhanced low visibility operations

Most improvements in aviation are incremental (and rightly so), with safety and performance being paramount. However, once in a while there arises a paradigm shift where the improvement opportunity becomes a game changer and the uptake is driven by competition, or by mandate.

One such major shift is the recent advance that enables enhanced low vision operations. In a very unlikely scenario, the FAA is providing a certification path for operators to equip and be approved for something never before accomplished. In the realm of low vision and under a pillar of NextGen, the Holy Grail of all-weather operations is finally within reach for owners and their pilots.

Aircraft OEM competition fuels necessary equipage as mandates are not yet forthcoming, unless you are an air carrier based in China where new rules require Head-Up Displays for air carriers and others.

Let’s start at the beginning - in 1941 to be precise. In that year the world was introduced to Instrument Landing Systems (ILS), which in turn developed into different categories (as shown in Table A).

The critical aspect of ILS, that has never changed, is the need for ground infrastructure at each runway where an ILS approach exists. Once the operator needs to fly the approach under Category II or III rules the increased ground infrastructure is matched by a corresponding increase in duplicate aircraft equipage, recurrent pilot training and frequent equipment testing.

Both FAA and owners alike have long sought a solution to this one problem, best explained as ‘a means to operate below non-precision approach (NPA) minima at any runway end without the need for expensive ground and air equipage, including all the related operating costs’. 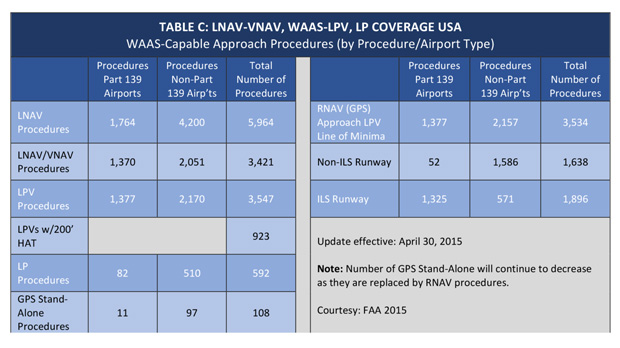 Then along came the Global Navigation Satellite System (GNSS) using GPS, which is a satellite solution and a means to provide an accurate lateral and vertical guidance path as precise as ILS, more or less. While GPS provided amazing opportunities for enroute and terminal operations, it never quite met the accuracy requirements to do better than a Cat I ILS.

So is GBAS the Holy Grail?

Unfortunately not. GBAS requires a terrestrial-based error monitoring and correction station at each airport, and is only installed in a few locations. GBAS is also a focus for air carriers, meaning that high-volume Metroplex airports will be the first equipped and wide-body jets the first approved for GBAS operations, a similar situation that has occurred with RNP-AR.

Significantly, all of these satellite-based technologies, as with ILS, are extending the instrument segment of an approach. However, at some point in every flight there needs to be a transition to the visual segment.

Synthetic Vision
Apart from some tweaking with a limited number of approaches and special authorization to enable lower than CAT I when equipped and operating with HUDs, the only way forward today is with synthetic vision. To repeat and also to reinforce the point, for extending the instrument portion of any straight-in approach to ‘lower than current CAT I minimums’ at any non ILS runway, while avoiding airport equipage, the only way forward is with Synthetic Vision: To be more accurate, with a Synthetic Vision Guidance System (SVGS). 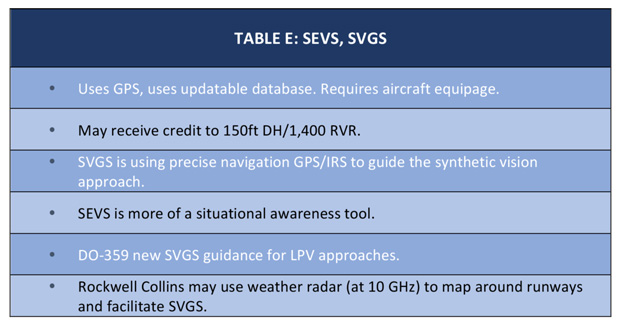 Competitive aircraft OEMs understand this fact, but they also understand that while SVGS presses the instrument segment barrier closer toward the ground (at best 150ft HAT/DH with 1400 RVR), it still leaves the visual segment itself unresolved, such that an operator can plan and always fly the trip as filed during low visibility. Note that the visual segment of an approach is from 200ft height above the ground touchdown point (HAT) or decision height (DH).

Instruments can guide an aircraft to that point without the human eye as long as a full operational ILS exists at the runway. This is referred to as ILS CAT I. The lower instrument barrier for SVGS referred to here is intended for runways with or without ILS as long as an approved alternative low approach, such as WAAS-LPV, exists.

As they say, ‘seeing is believing’, and no database with GPS technology can ever match what you see in real time. But what if you have a real time device that sees as if it were a human eye, and more importantly at frequencies outside the visible spectrum of light? Enter the enhanced vision system (EVS).

Currently there are a few ‘sweet spot’ frequencies that can see what the eye cannot and with signal processing, provide a pretty decent picture. Certain bands of infrared (IR) can create windows in fog, haze, snow, rain, smog and dust, but not pure cloud. Some active radars in various bands can see through most visibility blockers found at airports, but they have poor image quality or are not mature enough in their technology to ‘cut the mustard’.

Highly sensitive and expensive (cooled) IR-based cameras are widely populated in Gulfstream and Bombardier model long range jets. Their sensitivity is key toward providing the operator with an ability to use lower landing minimums.

Evaluations of active radar devices are also underway, and understandably under wraps until proven commercially viable. However, Rockwell Collins has announced a version of its X band radar that may be used to facilitate synthetic vision with real time data, due to its ability to ‘pick out’ visual cues in the runway environment.

Cleverly lower cost and uncooled, multi-spectral cameras tease out essential visual cues both on the approach and during the landing phase. While not yet certified, two systems are in development and undergoing aircraft certification: Rockwell Collins EVS-3000 on the Embraer Legacy 500/450; and Elbit’s ClearView on Dassault’s Falcon 5X/8X. Both systems utilize several different sensors encapsulated into a single camera unit, to catch the various cues at an airport including LED lighting. GPS technology is used to confirm the expected position of these cues in relation to the aircraft position.

New vision-based technologies are emerging all the time as competitors seek the Holy Grail. With so many ways to achieve low visibility performance, there has arisen confusion around the use of EVS and the misuse of the term by many potential operators. EVS in itself is a great situational awareness tool, with low cost uncooled devices migrating into all types of aircraft and helicopters. These have good enough sensitivity to be useful for pilots. For any reduction in landing minima, however, an EVS today must be cooled (an internal maintenance-free function), and have a sensitivity much better than 35mK (milli-Kelvin).

Because certification is dependent on the pilot’s ability to maintain visibility within the airport approach and landing environment at all times, the EVS can only earn credit when displayed on a Head-Up Display (HUD), and it must be sufficiently sensitive and possess adequate resolution to be equivalent to the human eye.

Critically, human eye equivalency is what it is all about.

The reason for this is the rule for landing an aircraft has never changed. FAR 91.175 simply added two sections (l) and (m) to allow for Enhanced Flight Vision System (EFVS meaning EVS displayed on HUD) to be used in lieu of natural vision (the human eye). To replace natural vision, the system must be equivalent as demonstrated by a complex series of flight testing during aircraft certification.

A HUD displaying EVS and approved for credit, such as lower minima, is known only by the FAA as EFVS. Confusingly, it is still known anywhere else as EVS.

Here is where the philosophies of flight do battle and the outcome is not yet decided. Synthetic vision (SV) proponents believe that with sufficient instrumentation guidance (and perhaps a small EVS-filled window in the Primary Flight Display), head down approach and landing can be achieved. Honeywell has openly promoted this position.

HUD proponents such as Rockwell and currently supported by the FAA position, display SV on a HUD. The SV is switchable with EVS. EVS, displayed on the HUD, is then operationally approved as an EVS-HUD combination (EFVS in the US), for landing credit that currently goes to 100ft height above the terrain and the decision height for continuing to land. The decision height for ILS CAT I still stands at 200ft, so the EVS rule equates to ILS CAT II, but may not be called as such.

Note: For Europe the EVS credit is tied to RVR where a one-third RVR credit for any specific runway may be received.

Because synthetic vision does not see in real time, any lower minima gained by its use as a complex guidance system pushes the instrument segment lower to the ground (see Figure 1). For EVS however, because it is real time visualization, it may be used (if displayed on a HUD) for visual credit in the visual segment. 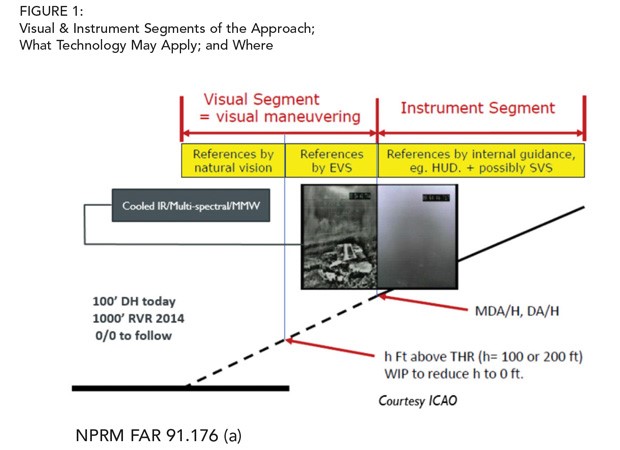 The FAA has essentially taken the old landing rule FAR 91.175 and returned it to its existing status with no EFVS provisions. It has created a new landing rule just for EFVS operators. The rule is still under Notice of Proposed Rulemaking (NPRM), but is due for final release in 2015. If granted, this FAR changes the game as a true paradigm shift. Why so significant? Here an aviation authority has created a rule that is ahead of a technology able to perform and meet its fullest intent!

In essence the FAA has created a path with an end goal where all OEMs and their customers operating under Part 91, 91K, 135 and 121 can plan their long term equipage, comfortable in the knowledge there will be no major operational roadblocks ahead.

This rule FAR 91.176(a) describes the steps to attain 0/0 approach and landing operations including approach ban clearance for Part 121 operators. Interestingly the FAA proposes also to move the existing FAR 91.175 section (l) and (m) into a new FAR 91.176(b), where the 100ft HAT/DH limit still applies.

By extending the visual segment all the way to touchdown and rollout, without the intervention of the human eye at any point, the means to the Holy Grail has been determined. So the yellow brick road has been constructed to the Emerald City, but on this road just as in the Wizard of Oz novel, there are difficult spots to navigate: everyone is looking for the technology that will overcome the opaque visibility barrier. 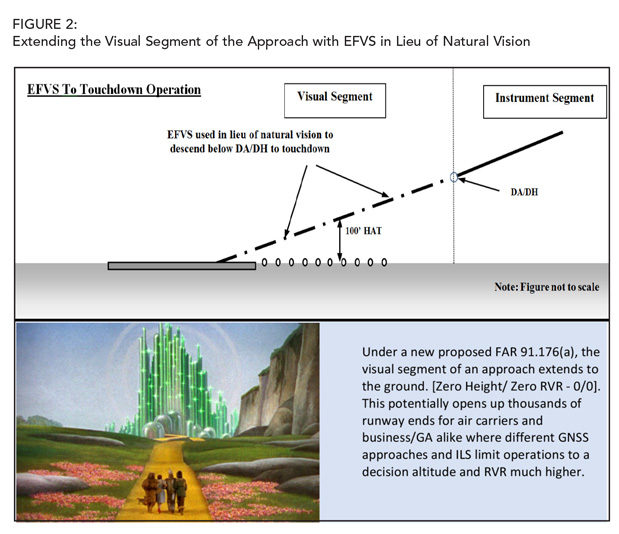 The FAA has added two new visual cues to FAR 91.176(a); namely runway threshold or runway touchdown zone landing surface. Wisely the FAA proposes to implement the new rule in phases beginning with 1,000, then 300 and then 0 RVR, along with the corresponding altitude limitations.

The most important and fundamental challenge for the aviation technologist is how to overcome the opaque visual barrier by designing a product that can continuously see the runway threshold or the runway touchdown zone landing surface, from 200ft or greater (the point at which the instrument approach being flown transitions to visual). To be truly revolutionary, the technology needs to see in all low visibility conditions, a situation unattainable today.

While this landing ‘predictability solution’ does not take care of runways closed due to thunderstorms, ice or NOTAM events, it certainly ups the ante for many operators. As with all game changers, the new capability does come with certain requirements and limitations — additional training and OpSpec/MSpec or LOA for example. Takeoff credits may follow where methods exist today to obtain lower takeoff RVR approvals, such as for air carriers.

In summary, low visibility landings are still an immature area of flight operations, but since the early 2000s tremendous strides have occurred. Aircraft OEMs are lining up for various forms of low visibility operations (LVO) technology as the enabling rules expand gradually across the world.

As technology slims down in size and prices reach affordability, smaller GA will take an interest. Because of its complexity however, expect LVO equipage for credit to be mostly an aircraft OEM venture, at least for the near future.