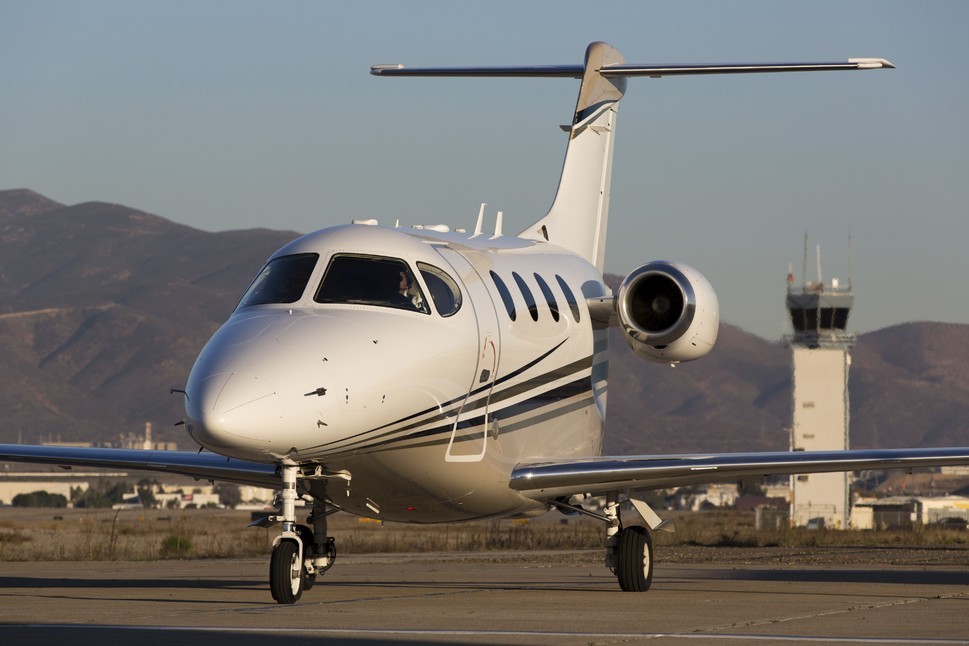 Helping you to familiarize with avionics advances and related mandates for equipage, Ken Elliott reviews aviation technologies within NextGen, this month focusing on Part 2 of Data Comm, covering FANS 1/A+ and ATN-B2.

Last month we addressed the first of Data Comm’s two main areas; ATN-B1 (Controller Pilot Data Link Communications, or CPDLC). This month we look at the second part, FANS 1/A+ (including ATN-B2). We covered the Data Comm history reaching the point in time when FANS 1/A + was introduced.

In 1983 ICAO began an effort to establish a DataLink architecture under its Future Air Navigation System (FANS) structure. This advance became the architecture and protocol standard of an oceanic communications network where heretofore HF and early Satcom ruled. Boeing, a long time user of the Aircraft Communications Addressing and Reporting System (ACARS), developed FANS-1 to the newer ARINC 622 binary data format, followed by Airbus with its FANS-A. Later these were combined and have since evolved into FANS 1/A+. (As an aside, Controller Pilot Data Link Communication (CPDLC) in Europe is now LINK 2000+ but also carries the term FANS-2.)

Boeing (FANS-1) incorporated the principles of Automatic Dependent Surveillance (ADS) and early CPDLC using the existing ACARS. Note that ADS is automatic surveillance such as position reporting, and CPDLC is communication using text in the form of data, not voice, for clearance requests and authorizations.

ADS for FANS is known as ADS-C (ADS Contract) and allows an automatic handshake by contract between the aircraft and enroute ATC for DataLink. This is different from ADS-B (ADS Broadcast), that uses GPS/FMS and Transponder technology providing flight and position information. This information is broadcast as “OUT” data to ATC and aircraft with receivers having “IN” capability.

ICAO had continued a separate FANS effort similar to Boeing (FANS 1) and Airbus (FANS A), based primarily on a newer Aeronautical Telecommunication Network (ATN) set of protocols and standards. This development also became known as ATN-B1 (Baseline 1). Understanding this nomenclature is important because today the two Data Comm paths of FANS 1/A+ and ATN-B1 are being combined in the form of ATN-B2. (The ‘+’ on the end of FANS 1/A, incidentally, came about when RTCA industry standard DO-258 was amended to DO-258a, adding a message latency feature in CPDLC. All FANS-1/A+ messages can be sent over Inmarsat or Iridium satellite systems in addition to VHF (VDL Mode 2).)

ATN-B2 brings together the oceanic focused FANS 1/A+ and continental focused ATN-B1, and it is still under development by FAA RTCA sub-committee SC214 and EUROCAE WG 78. ATN-B2 includes advanced services such as 4D Trajectories, Dynamic RNP and Advanced Flight Interval Management with ATC winds.

From a global perspective FANS development satisfies the specific goals of various transportation authorities and includes: 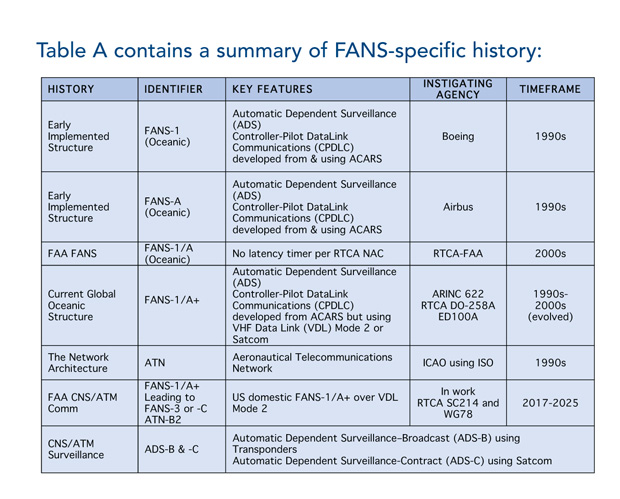 The FAA uses FANS 1/A services today in the North Atlantic and Pacific oceans. Domestically, rather than adopt an ATN-only based solution, the FAA has opted for a longer-term solution combining FANS with ATN (as CPDLC). This dual stack aircraft structure has both FANS 1/A and ATN-B1 Data Comm systems installed with the goal of seamless operations (FANS 1/A+).

Currently, as the FAA implements FANS 1/A+ technologies in domestic airspace, Data Comm will be used for clearances over VHF VDL Mode 2, which is faster than the existing VHF network.

ATN-B2, an evolution forward of FANS 1/A+, is in its final stage of development by FAA RTCA sub-committee SC214 and EUROCAE WG 78. This protocol will hopefully be embraced worldwide.

Think of Data Comm as having three major components:

Data communication can be via VHF (either POA ‘Plain Old ACARS’, or AOA ‘ACARS over AVLC’, otherwise known as VDL Mode 2). It can also be via HF using High Frequency DataLink operating at slow speeds, yet may be used over the poles. Lastly data communication can be via satellite, today, using Inmarsat and/or Iridium (FANS Over Iridium - FOI). Iridium provides polar coverage, alleviating the need for HF.

VHF ground stations operate as continental networks, while satellites use SITA, ARINC, Satcom Direct and at least 11 other commercial networks, to provide allocated bandwidth to multiple aircraft operators who contract their service. These services are communication, broadband and data. They also may “internetwork” to ensure that messages from users of one network are communicated to users of another.

Separately, aircraft must have equipment suitable for VHF, HF and Satcom as required to meet their individual needs. Aircraft crews need to be trained and may require a letter of authorization (LOA) to operate when used for FANS services (currently the case in the US), or alternatively authorization via an OpSpec.

While there is the data communication component of FANS, there is also the surveillance component known as ADS-C. ADS-C is a contract that, once established, sends data automatically from the aircraft to the ‘contracted’ air traffic center, thereby supplanting the need for radar contact. Being surveillance data (aircraft position and trends), this action is equivalent to the ADS-B Out function of continental surveillance that originates partially as a highly accurate GPS position broadcast by an aircraft transponder.

ADS-C is not broadcast data per se, but is requested surveillance under an individual contract between aircraft and ATC. ADS-C can be over Satcom or VHF, as a facilitation of ACARS for example. In the event ADS-C services are not available, CPDLC/ATN coverage is the default. Network service providers need to support ADS-C for all of your FANS capability to be functional.

There are four types of ADS Contract available:

- Periodic that are time-based;
- Event that are aircraft 3D deviation-based;
- Demand that are initiated by ATC for immediate surveillance information of an aircraft trending position;
- Emergency that is initiated by the pilot. 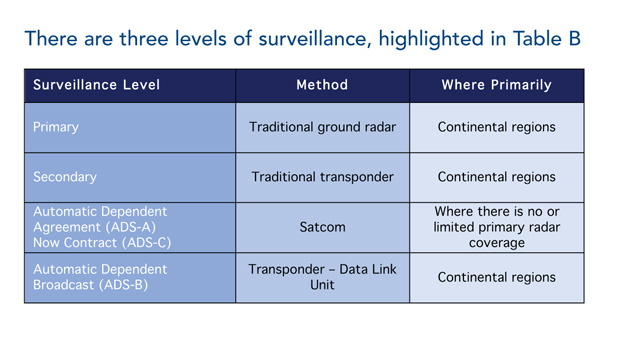 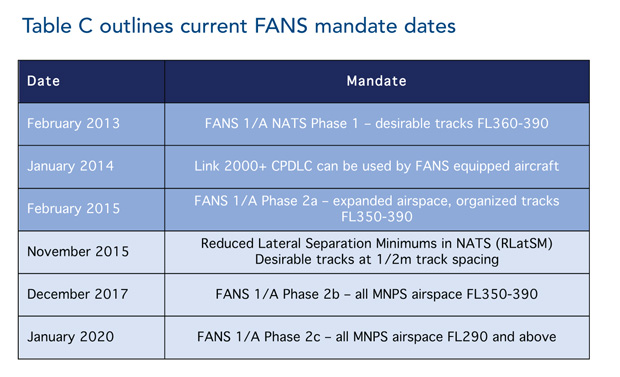 Aircraft and equipment programs supporting NextGen often combine FANS 1/A+ for oceanic use with CPDLC for Link 2000+, as well as ADS-C and ADS-B capability. Confusingly, there are as many partial equipage versions existing as there are solutions available, making it essential for many operators to seek professional advice, specifically for their aircraft.

A simple rule is the newer the aircraft the greater likelihood of equipage compliance.

A typical set of FANS equipment will include:

- EFIS displays may require modification for display messages and annunciation ‘in front of the pilot monitoring’.

- A Level-D ARINC 741-compliant Satcom using either Inmarsat or Iridium satellite service. Be careful to ensure FANS compliance of the actual Satcom equipment itself. For example, when using Iridium the system design must meet the specification of TSO C-159a, and when using Inmarsat the equipment must meet TSO C-132 requirements. If the equipment does not meet these standards then an Alternate Means of Compliance (AMOC) must be sought.

- A Communications Management Unit (CMU) to control and perform the DataLink in certain configuration of OEM equipage. This could be an upgrade to an existing CMU.

- A compatible data-capable Cockpit Voice Recorder that in some cases may be a combined cockpit and flight data recorder (CVFDR). This is needed to record the data sent back and forth as Data Comm now replaces some voice communication critical to a flight’s record.

- Modified Audio Control Units so that either pilot can select audio over Satcom.

This impressive and scary list of required equipment is the reason why, outside of new aircraft OEM solutions, equipment suppliers and MROs have been slow to react. Solutions require complex Supplemental Type Certificates (STCs), which take a considerable amount of time and financial investment in non-recoverable engineering (NRE) to implement.

In the first article of this series a table of OEMs and MROs with NextGen installation capability was provided (see p56-57 of the January edition). Apart from the aircraft OEMs that either have - or are frantically working on - their FANS solutions, there are several key MRO players that are focusing on specific programs.

There are several MROs offering, or proposing aftermarket inclusive FANS solutions, and in some cases they are keeping their STC development close to their chest. Following, is a list of ‘non-aircraft-OEM’ MROs developing solutions today:

- Chicago Jet Center – an early starter with a number of STCs both completed and in work across several aircraft types. Chicago Jet has FANS information on its website.

- Duncan Aviation – always a leader in anything avionics and very well versed in FANS, with a complete and thorough coverage of NextGen on its website (www.duncanaviation.com).

- Clay Lacy – another early starter having a number of legacy Gulfstream solutions both ready and in work.

- Dassault Falcon Services – although owned by Dassault, DFS provides a FANS solution under the Elite II upgrade program for the Falcon 900C and EX.

There are a broader number of MROs incorporating factory bulletins and modifications that address FANS upgrades as they are promulgated by either the aircraft manufacturer or the avionics equipment manufacturer. These facilities may either be factory owned or factory authorized. Make sure, when you are discussing these upgrades, to check what the upgrade actually covers, as many are only incremental solutions to the total FANS requirement.

Some solutions come as part of factory avionics packages such as Dassault’s EASy II, Bombardier’s Batch 3 for Globals, or Gulfstream’s PlaneView cockpit. If your aircraft is covered under an equipment OEM maintenance service program, such as Rockwell Collins CASP or Honeywell HAPP, there are distinct advantages to using equipment solutions from the same provider in terms of support.

Furthermore, with FANS Over Iridium there is an opportunity for lower installation and operating cost solutions being explored across multiple aircraft platforms. For example, Dassault recently announced a GoGo Iridium solution across a range of its aircraft platforms.

As previously mentioned, FANS installations are complex and require STCs to implement across different aircraft types. Operational approval can also be involved and is structured to the individual user requirements, including where DataLink services will be used.

While FAA airworthiness circular AC 20-140B offers guidance on the installation certification or design approval of FANS, FAA AC 120-70B provides guidance for the operational approval of DataLink systems to ICAO standards. The AC covers authorization process, flight crew qualification and training, preparing the Minimum Equipment List (MEL) and the Master (MMEL), aircraft flight manual, maintenance, operational use and reporting, as well as information for foreign carriers.

DataLink services do not rely on voice, avoiding all the concerns regarding voice over, interpretation of words, HF limitations, out of range VHF, out of range radar, pilot and ATC workload, and data update times.

FANS DataLink services are automated and highly flexible to users both in the air and on the ground. FANS improves safety, reduces operating costs and saves time. Lastly, beyond Data Comm, FANS serves other areas of NextGen from surveillance to navigation, to improved traffic flow.