Helping you understand Avionics advances and related requirements for equipage, 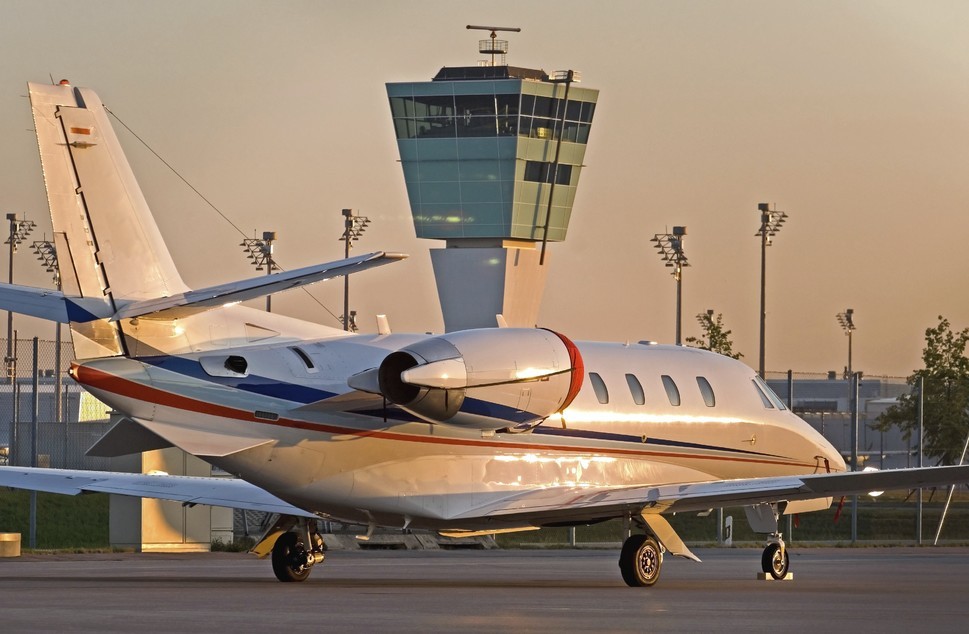 We begin this article with its relevance for Business Aviation – what are the benefits and impacts of Data Comm (primarily centered on commercial fleets) to the average business aircraft operator. Already nearly 1,000 US-based business jets are equipped with pre-departure clearance (PDC) digital technology, which requires radios capable of handling datalink communications.

Following are the benefits of Data Comm to business aircraft operators:

• Two-way data exchange, instead of voice, between pilots and air traffic controllers;

• Greater efficiency in route changes while remaining in the departure queue;

• No altitude or lateral restrictions when crossing via tracks;

• Use of ADS-B and ADS-C (which offer their own benefits but require Data Comm);

• Ability to have data uplinks sent to the flight department on the ground simultaneous to FMS message being received.

Following are the disadvantages of not participating in the voluntary use of US Data Comm services:

• Delayed departure clearances – in the queue;

• More fuel consumed and higher hourly cost to the operator;

Data Comm includes both Controller Pilot DataLink Communications (CPDLC) and Future Air Navigation Systems (FANS) protocols. The current implementation status of these technologies is in flux across the world and is causing operators to understandably deliberate on their equipage and training decisions. Following is an outline of Data Comm as of mid-2015.

In 2012 the US government committed $28.37m for Data Communication (Data Comm) Segment 1, to implement services that provide benefits including reduction of ground delays, greater airspace throughput and reduction in workload. Phase 1 of this segment covers departure clearance text-based data to the onboard Flight Management System, rather than traditional voice. Phase 2 focuses on en-route services. 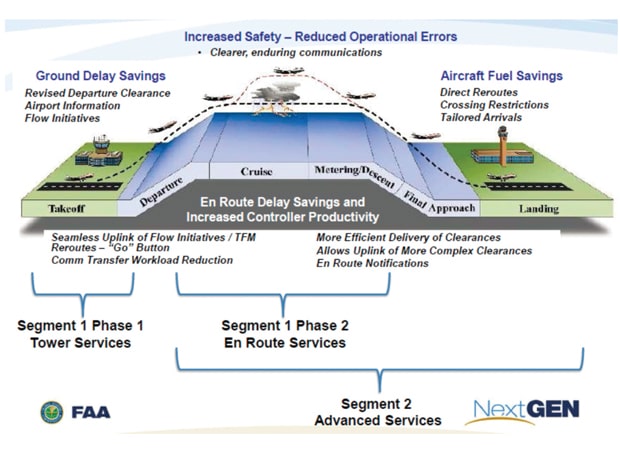 At certain airports, during June 2015 changes to the receipt and uplink of flight plans by the FAA were adopted. CPDLC and Pre-Departure Clearance (PDC) act as a baseline for later NextGen Data Comm technology, providing services such as clearances, instructions, crew requests, reporting and traffic flow management. PDC may be used in place of CPDLC if the aircraft is not CPDLC equipped, but only through the end of 2016.

Initially as a trial phase, Phase 1 changes will not impact Business Aviation and will be voluntary for air carriers. Flight plan sections must comply with ICAO coding (ICAO-4444). Departure Clearances (DCLs) can be uplinked when a flight plan differs to what is existing in the FMS.

Understand that while Data Comm in the US is not mandated for all operators, if you want to use the Data Comm services and take advantage of its benefits, you will need to be appropriately equipped. All operators not equipped with CPDLC will likely receive lower priority departure clearances. For the US, long-term equipage will need to be adequate for FANS Baseline 2 and additional VHF (Satcom for US Oceanic).

DataLink services can be provided by Satellite, VHF or HF means, and the communication method may not necessarily be known by the operator. The air traffic services and third-party service provider determine the DataLink means, partially based upon your equipage and operational approval.

ATN-Baseline 1, is a digital system and FANS-1A, is an analog based system. Currently the digital operation is known as FANS 1/A+ over VDL-Mode 2 and the analog operation is known as the VDL-Mode 0/A. The FANS 1/A system uses both digital and analog components. These will later transition into a full ATN (Baseline 2) system, using new Segment 2 advanced services such as; 4D trajectories, Dynamic RNP, advanced interval management (A-IM) with ATC winds and D-Taxi (see also under North Atlantic-ICAO below). A later ATN Baseline 3 is being developed to include the contiguous US and a wider set of users.

To operate Data Comm within the US, operators must be approved, based on equipage and training via OpSpecs, M Specs or an LOA, depending upon the FAA FAR Part under which they operate.

Initial departure clearance trials have taken place at Newark, NJ and Memphis, TN by United Airlines and FedEx respectively and report between 6-12 minutes departure clearance time savings. These trials have been extended until late 2016. Beginning soon this CPDLC technology will be extended at up to 57 additional commercial airports at an estimated cost of $7m per facility.

A Segment 1, full Phase 2 final investment decision (FID), is due from the FAA by the close of 2015. Initial Phase 2 investment was approved and commenced in 2014.

Airlines and others have concerns over the security of Data Comm, including message protection and corruption of information critical to flight. On May 27, 2014 the FAA announced a security control audit of Data Comm to ensure that proactive protection methods are implemented. This includes contingencies up to and including, a complete loss of the Data Comm services.

The FAA intends to measure Data Comm performance via various metrics to be reported on its NextGen Performance Snapshots website (NPS) - https://www.faa.gov/nextgen/snapshots/.

One metric being considered is average taxi-out time. For Business Aviation, this could be IFR flight taxi time from ramp to take off. Longer taxi times indicate inefficiencies that Data Comm services should reduce.

On March 2, 2015 the FAA issued a policy statement regarding an existing data recording rule that was well received by operators and gained widespread industry support. Part 121 and 135 aircraft Cockpit Voice Recorders (CVR) are currently required to record Data Comm as well as existing voice activity. Many legacy aircraft – however - could not comply, and industry was not updating to the new CPDLC equipment.

Under the new policy, the CVR recording requirements are separated between aircraft built before December 6, 2010 and those built after that date. An existing FAA InFO 10016 document, dated August 16, 2010, is cancelled and a revised InFO is under development.

Data Comm is an essential part of airport surface operations, especially during its initial phase of departure clearance. Figure 2 demonstrates the wide spectrum of surface considerations at major airports today (courtesy of FAA). 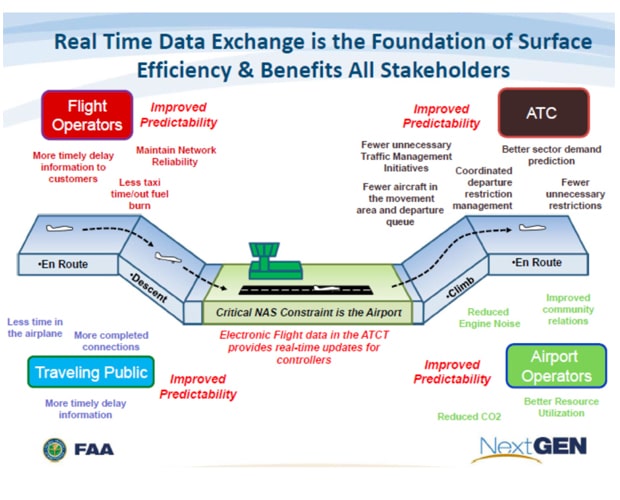 Since February 2015, for aircraft using the existing North Atlantic tracks between FL350 and FL390, FANS 1A, CPDLC and ADS-C operations are a requirement. This Phase 2 North Atlantic mandate resolves the ever-increasing volume of air traffic electing to use these desirable skyways. Note that Data Comm covers all of communication, surveillance and ATC intervention capabilities.

Beginning December 7, 2017 a Phase 2B mandate will extend applicability to the entire ICAO North Atlantic region, followed by another Phase 2C, effective January 30, 2020 adding all altitudes above FL290. If operating in areas of existing radar coverage, the New York Oceanic flight information region or the airspace north of 80 degrees north latitude, the Phase 2 requirement may be excepted.

On July 1, 2015 the FAA issued a notice clarifying and advising the areas of oceanic airspace where it will have jurisdiction. The notice highlights the air traffic control services available and complies with an ICAO requirement for member states to define their jurisdictions and available services. This short and informative notice may be located in the US Federal Register as Docket # FAA-2015-1497, Airspace Docket #15-AWA-4.

As reported in our previous Avionics Mandates article, the dates for CPDLC implementation throughout Europe have changed. We covered date changes and regional implementation status. Important Eurocontrol dates include:

• All aircraft should be appropriately equipped by February 5, 2020. Forward- and retro-fit are now indistinguishable in the updated requirement.

FAA and SESAR harmonization is ongoing, just as with FAA and ICAO, ensuring similar protocols of Data Comm as aircraft transition from North Atlantic Tracks to EUROCONTROL airspace. Figure 3 offers a summary of harmonization technology areas (courtesy of SESAR/FAA). 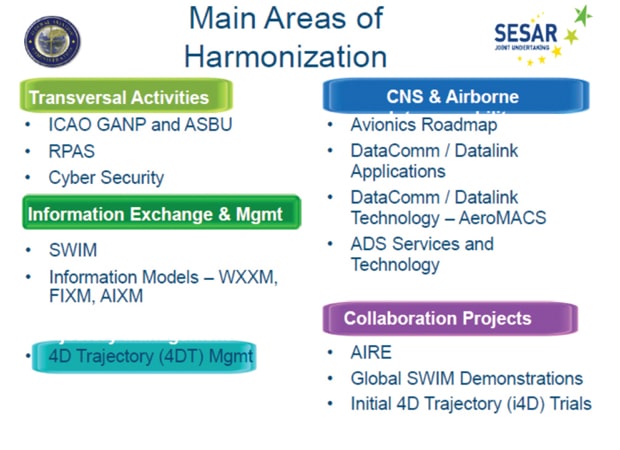 As mentioned in previous articles, be very careful when assessing the equipage of your current or next aircraft for Data Comm. Very often aircraft are only provisioned, and what may apply to one range of serial numbers from the aircraft OEM may be very different to another.

Always consult with your maintenance or completion provider to ensure equipment “long part” numbers are applicable to the upgrade. Beyond the part number, most equipment will list a hardware and software status designation that should also be verified prior to the Data Comm, CPDLC or FANS, being implemented.

Do not forget training followed by operational approval is required. Consult with Business Aviation member organizations such as NBAA for advice on operations in different world regions. US operational approval guidance may be found under FAA Airworthiness Circular AC120-70C recently updated and OpSpec A056 for air carriers.