Beyond The 'NextGen' Cockpit

NextGen's on everyone's lips, but there's plenty to stay focussed on in the current flight panel including safety, status awareness 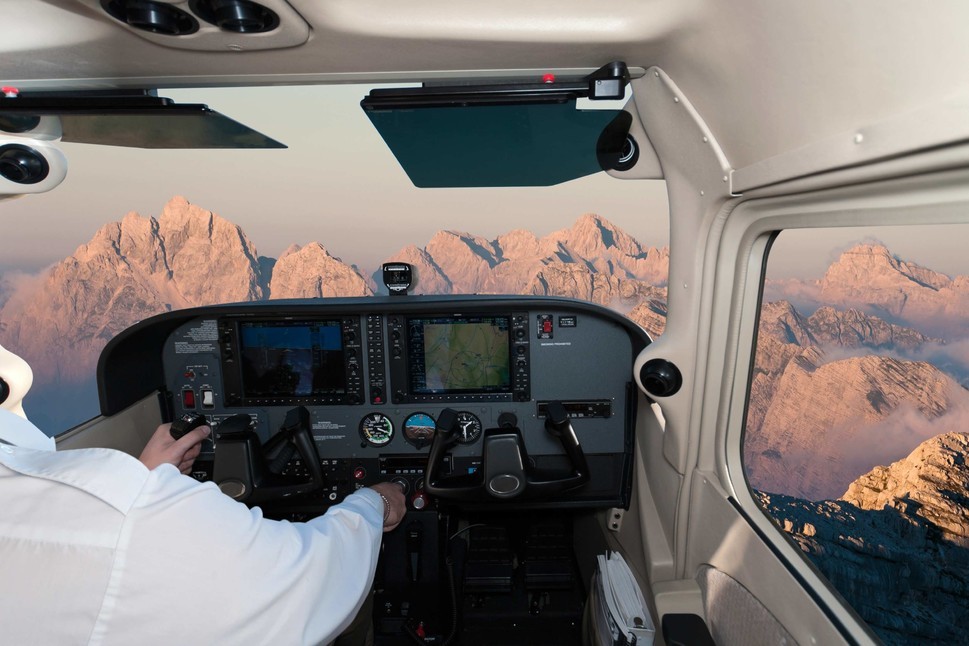 Nowadays, few venture beyond the elements of NextGen when discussing new or current technologies - especially when dealing with cockpits. In fact the true relevance of NextGen can be very confusing, especially when technology developers and marketers continuously establish tenuous links to NextGen.

For clarification, NextGen applies to four major areas of airborne technology:
• Performance Based Navigation (PBN)
• Surveillance (ADS-B In and Out)
• Communication (FANS/CPDLC and ADS-C) and
• The lesser-known Low Vision Ops (GBAS and EFVS).

It also applies to significant areas of Air Traffic Control implementing ground technologies and procedures that utilize the aircraft equipage and accommodate NAS-wide operations. For the sake of international future airborne equipage under SESAR and ICAO the situation outlined largely applies across the globe.

So identifying technologies and resources within the aircraft cockpit that are outside the ‘buckets’ of NextGen is not necessarily an easy matter. Long before a flight crew enters the cockpit of a business jet, advanced cockpit-related technologies play their role. In an endless stream of simplicity, technology enables integrated flight planning, maintenance diagnostics and flight and trip analysis, ensuring operational success anywhere in the world.

Via tablet devices, pilots can plan, download, review and upload complex flight data. Aircraft readiness and status may be assessed, route logistics and international trip planning can all be prepared from the comfort of the flight department, or an FBO. Once within the cockpit all the pre-flight data can be downloaded into the aircraft systems using complex and intuitive software. Aircraft software is the heart of today’s technology and is carefully managed by strict standards of certification.

Technology beyond NextGen plays a significant role in guiding the aircraft and crew during all phases of flight - including ramp preparation, taxi, take-off, cruise, approach to landing, taxi and post flight. After landing, downloaded data may be analyzed for continual improvements in flight operations, incident review and much more. Using the flexibility of WiFi and the portability of PEDs, QARs and tablets, data is available instantaneously wherever it is needed.

From a government perspective it is advantageous to drive equipage and infrastructure away from airports and airways into the aircraft cockpit where costs to equip, maintain, train and provide continued airworthiness are borne by the operator.

Airlines in particular take a different position, and all users understandably resist technology requirements where the business case may favor one user group, appear political, or just does not make good sense.

CRM, SMS & HRM
Beyond the equipage and its software related to the complete flight regime are three other areas being increasingly supported by technologies and interrelated processes. The first is Cockpit Resource Management (CRM) where the use of cockpit technology is carefully monitored to ensure pilots are focused on the primary objective of flying the aircraft. CRM defines equipment responsibilities to ‘pilot flying’ and ‘pilot not flying’, all documented in individual flight department CRM guidelines. CRM also addresses automation dependency and the common problem of information overload.

Another area is Safety Management Services/Systems (SMS), where managing safety by reducing risk, is a systematic approach to cockpit safety.

Finally, there is Health and Resource Management (HRM). Data - both real time and stored - is provided in-flight and on the ground to crews and their maintenance support. Equipment suppliers receive direct health information from engines and other systems to enable monitoring, thus providing a product support level never experienced before. Monitoring, recording, analyzing and improving aircraft performance are all key functions of HRM.

Regarding the technology itself, Table A (right) outlines some of the major areas of cockpit-centric technologies.

Data
Perhaps the largest and fastest growing area of technology for aviation departments is that of Data. The paperless cockpit replacing charts and bringing weather onto devices separate to PFD/MFDs, has expanded way beyond the initial goals. Today, especially for fleets, equipment and software allows real time and post-flight performance data to be shared from anywhere to anywhere, to anyone who has access, at any time.

Linked to the equipment and aircraft manufacturers are very unique Tablet Interface Modules (TIM), acting as firewall buffers to allow system architecture that has been extensively certified, to be accessed for the acquisition of protected data-bus information that may be displayed to the crew, sent over airborne communications to ground-based centers, to company personnel, or be downloaded after landing for flight department use.

Cockpit tablet devices and their interface modules provide outputs via WiFi, USB, digital to ACARS and Satcoms, monitoring multiple aircraft systems - including Quick Access Recorders (QARs) and Surveillance Video. A lot of data acquisition serves the needs of HRM (mentioned above). It becomes increasingly important to all, including individual operators, as potential benefits are realized. As there is a plethora of devices, software and applications you should be selective in what works best for your operation - first consulting with the aircraft OEM or primary avionics OEM who may have tested, or be beta-testing fully integrated solutions.

Indeed, legacy aircraft operators (with a vast array of avionics and systems equipage) face the biggest challenges in this area. PEDs are a subset of HRM and also used for other purposes. There are risks with these devices, as covered under CRM. National Business Aircraft Association (NBAA), Flight Safety Foundation (FSF), along with reports emerging from Eurocontrol’s initiated portal SKYbrary are all very helpful in addressing PEDs as well as cockpit distraction from Class 1 and 2 devices.

Existing EFIS upgrades are another way that some of the data features are appearing in cockpits. There are several major aircraft and equipment OEM upgrade programs available. While some include the flat panel displays themselves, others add a variety of paperless data options to existing advanced displays.

Link
‘Link’ covers communication/data means between the cockpit and the ground (as opposed to cabin communications widely featured in publications and news today).

The NextGen component of ‘Link’ is FANS. Beyond FANS, in part, is the ability for cockpits to participate in HRM - reporting the status and health of aircraft engines and other on-board systems.

The air to ground downlink to flight departments and company headquarters is becoming increasingly important to flight crews as we meet the expectations of our ‘now’ generation.

Some of the newer cockpit-related data services are called safety services and are not the same as the higher-cost broadband. Some of those relate to operational benefits of cockpit external linking providing efficient realtime routing, saving time and fuel. External data linked to EFB/Tablet devices is also available via safety services.

With the introduction of the new Ka-band (as opposed to existing Ku-band), the service capabilities of satellite, aircraft equipment and service providers will be greatly increased allowing (for example) more simultaneous voice and data connectivity. Already a feature of the Iridium OpenPort Aero service, this feature will be facilitated by Iridium even further with 66 new NEXT satellites, launching soon. (ViaSat and its popular Yonder is also expanding into Kaband for business aircraft when coverage capacity is available.)

Finally some of the data-link services such as Honeywell’s long-lasting Global Data Center offer Safety Management Integration and uplink of flight plans, as well as other messaging, oceanic, weather and NextGen communication-related services. This connecting of the dots between cockpit activity, SMS, CRM and HRM with ground-based real time support services, is a relatively new and exciting evolution of aviation.

Aware
The newer radars such as Rockwell’s Multiscan with predictive windshear and Honeywell’s IntuVue series, are taking predictive awareness to a new level using 3D penetration and therefore painting the full picture for flight crews.

Add the equivalent to human eye experience, using infrared EVS cloud-top and low visibility day and night penetration, from new Enhanced Vision Systems and you add a new dimension to cockpit awareness. Upcoming multi-spectral cameras promise features not yet available with existing IR devices. View the EVS on the upcoming Elbit Skylens wearable HUD and you are truly situated with one foot in the future.

If that level of awareness was not enough, some of the newer landing and surface awareness tools such as Honeywell’s Smart Runway and Smart Landing, and Rockwell’s Fusion surface awareness providing similar features, greatly enhance safety and situational awareness. These products provide useful features such as runway, taxiway alert guidance and aircraft configuration setting reminders, like flaps.

Apart from integrated solutions on PFDs and MFDs, stand-alone synthetic vision systems, such as Universal’s Vision 1, provide both exocentric and egocentric landscape views of the external environment.

Display
A number of MROs and aircraft OEMs provide sophisticated flat panel upgrade programs, often bundled with NextGen features such as FANS, PBN and ADS-B. However, as with Rockwell’s PL21 or just its IFIS, and Honeywell’s (Gulfstream GIV & GV) PlaneDeck, or G400, G450 & G550 PlaneView, additional features are provided to cockpits.

These and other current display devices include external video capability allowing them to display approved camera information such as enhanced vision. They also introduce useful tools such as a Flight Path Vector (FPV) providing on-screen flight guidance, reflecting the energy state of the aircraft and incorporating aircraft acceleration into flight direction cues.

Competition is ripe in the area of cockpit technology, and with Garmin fully-engaged in the Part 25 world, features useful to pilots and unique to a brand, are becoming the decision differentiators.

Track/Position
Tracking and position of an aircraft is becoming more of an issue, and not just for the airlines. You would be surprised by all the cockpit- controlled systems that enable optimum position and tracking.

Some of those with a strong cockpit presence are:
• A third FMS (increasing redundancy and dispatch),
• Dual IRS (for oceanic operations, or for when GPS satellites or reception go down),
• 4D trajectory and time prediction via advanced FMS and autothrottles (even dual),
• 3D FMS mapping (predicting aircraft performance requirements).

Additionally, satcom systems provide the ability to track. As coverage becomes more global and user fees come down, users will incorporate more of satcom’s enhanced features allowing 4D positional awareness at any time, to anyone, anywhere.

Deployable recorders combined with ELTs, and providing both voice and flight data have long been a desire of the NTSB to ensure recoverable information in the unfortunate event anything happens to an aircraft.

These may migrate into civil aviation going forward, as well as the visual recording of cockpit activity, if sensitivity concerns are ever overcome.

Summary
It is apparent with all the cockpit technologies covered in this article, that there is a lot of connectivity between various sub-systems that were previously stand alone. The needs for data, communication, 4D positional tracking, and a way of displaying or sharing while being constantly aware of your situation are immediate. Because today’s generation Tweet, blog, message, Facebook and network all in ‘the now’ a similar expectation is apparent and emerging in the cockpit environment.

The ability to outreach or connect anywhere, anytime, with anyone, is all but available - or soon will be. Everything connects in so many ways so that SMS, CRM and HRM become just as much a part of the airborne experience as the flight profile itself. They enhance it, adding to safety, status awareness, and aircraft performance. The technologies and the software that enable them are all, in their own way, ‘NextGen’.