NextGen summary of ADS-B and FANS in 2016

Helping you understand the technology, integration and advances of business aircraft avionics and equipage, Ken Elliott provides an update on NextGen in a two-part series, starting with a summary of ADS-B, FANS and more.

A lot has happened since we last reviewed NextGen in 2015. For example, there exists the steady realization that ADS-B Out, as a requirement, is not going away.

To be fair, the FAA has done a pretty decent job of communicating the need for ADS-B Out and implementing the system. There used to be more questions than answers. They ranged between ‘do I need to equip’, ‘when to equip’ and ‘what to equip’. Now that the questions are less, issues are moving over to the operations arena.

A big concern today is why the FAA is rejecting the performance of around 20% of ADS-B installations.

The FAA operates a ‘Compliance Monitoring’ program, and included in its compliance finding is the feared word ‘enforcement’. This situation is causing a ripple around the industry (especially within the GA community) where letters have been received and the FAA has been asked to revisit the way this monitoring program is meant to work.

To their credit, the FAA has implemented ‘enforcement’ as an opportunity to train and advise operators, and not punish. This is hardly surprising as the mandate is still over three years away. Unfortunately, as word and rumors permeate the wider aviation community, an obvious outcome of perceived ‘enforcement’ actions has been the reluctance of non-equipped operators to jump onboard as early or (more appropriately) on-time adopters.

The ADS-B Out train arrives in the station January 1, 2020. Of course the FAA did not foresee this unwanted ‘delay driver’ and is now figuring out an appropriate response. 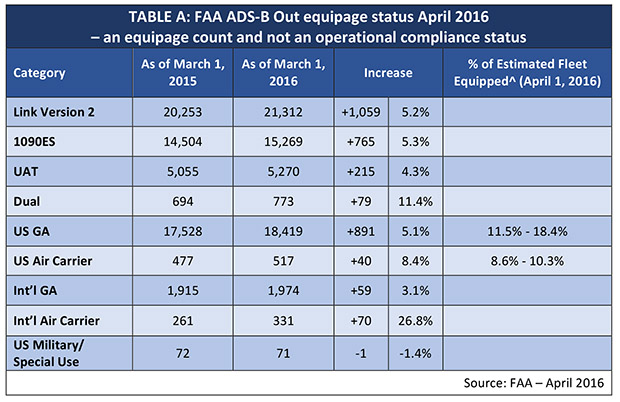 What is FAA’s Compliance Monitor?

Using existing radar as an ADS-B comparison tool, the Compliance Monitor (CM) identifies those ADS-B Out equipped aircraft performing below requirements. FAR 91.225 and 227 guide these requirements by checking for various message elements and the integrity and accuracy of aircraft positioning.

Some of the more common ADS-B Out performance problems include:

As of April 2016, for GA aircraft - including business jets - there were 9,860 systems installed and operating to the ADS-B out requirements, but there were also an additional 1,905 installed systems that were apparently not operating to the requirements. (We suggest you see these counts more as a relationship, as the actual numbers only include those aircraft that have been monitored, using an updated monitoring recently deployed, and in some cases include failures that occurred during compliance test flights.)

The updated version of the CM can now identify types of aircraft, identify the equipment vendors and even reveal the installers, allowing the FAA to back-off on pressuring the operators when problems originate with the equipment design or install configuration.

Sadly, even when including known systems, the install rate for all 160,000 GA aircraft (18,700 of which are business jets) to be equipped by the close of 2019 falls far short of targets. Instead of around 55,000 aircraft expected to be completed by now in order to be on target, the actual count of installed systems is no greater than 20,000. For air carriers the picture of completion is far worse, but the submitted airline plans for completion, within the compliance time frame, are more encouraging to FAA.

There are large numbers of Experimental and Light Sport Aircraft yet to equip; and worse, more of the aircraft completed do not meet operating requirements than do meet them!

To summarize ADS-B Out, the key focus is not just to be equipped, but to ensure you are operating correctly before 2020. The compliance includes proper functionality. The FAA has an excellent tool for checking the operating status of your ADS-B Out - visit www.faa.gov/nextgen/equipadsb/installation/ and select ‘e-mail us’ under ‘ADS-B Out Equipped’. This, we believe, will soon be a direct interactive tool for the user. In fact the FAA’s ADS-B website is populated with a vast array of useful data, mapped out in Table B.

Since late 2015 there have been some interesting business jet ADS-B Out solutions. Fortunately, they include what are known as AML STCs. An AML STC is a version of Supplemental Type Certificate that approves the installation of a specific product into a range of aircraft types. Normally STCs apply to one model of aircraft, or a group, based on the original Type Certificate (TC). 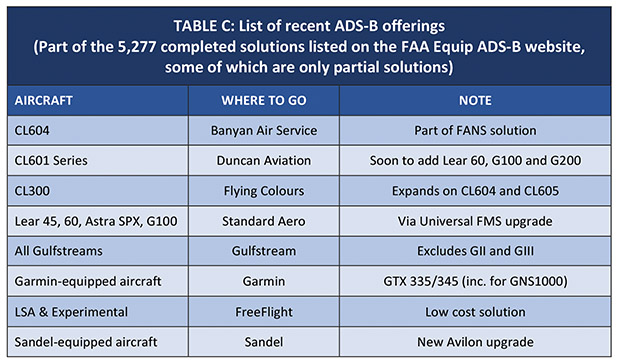 The Approved Model List (AML) provides a mechanism for the applicant to add different types of aircraft, made by different manufacturers, to the same FAA approved STC. In the case of ADS-B Out installations, they are usually an upgrade of some type, involving similar equipage options, wiring and structural rework. The aircraft listed in the AML will also be similar in the way their ADS-B systems operate for pilots.

When seeking ADS-B solutions for your aircraft, look for versions of FANS as the DataCom solution. Some of the business jet solutions for ADS-B include FANS for North Atlantic Tracks and vice-versa. Those combined solutions may also be part of cockpit display upgrades or factory block upgrades, where downtime and costs may be reduced.

There are 4 regions of interest regarding FANS, including US DataCom; North Atlantic Tracks; Europe CPDLC; and FANS beyond the North Atlantic. Depending upon who you talk to, or what you read, the information regarding FANS varies from ‘you need it’ to ‘you don’t need it yet’. The reality is that it depends!

All the terms alone are enough to confuse even the subject matter expert, while delays and changes of direction create lethargy within the aviation community. FANS has never been mandated carte blanche, such as with ADS-B Out. FANS is required in some of the places where you need to fly and will be required more so, as the months pass us by.

As a summary, Table D covers technologies that embrace the FANS areas of interest, including where and when you will need them. 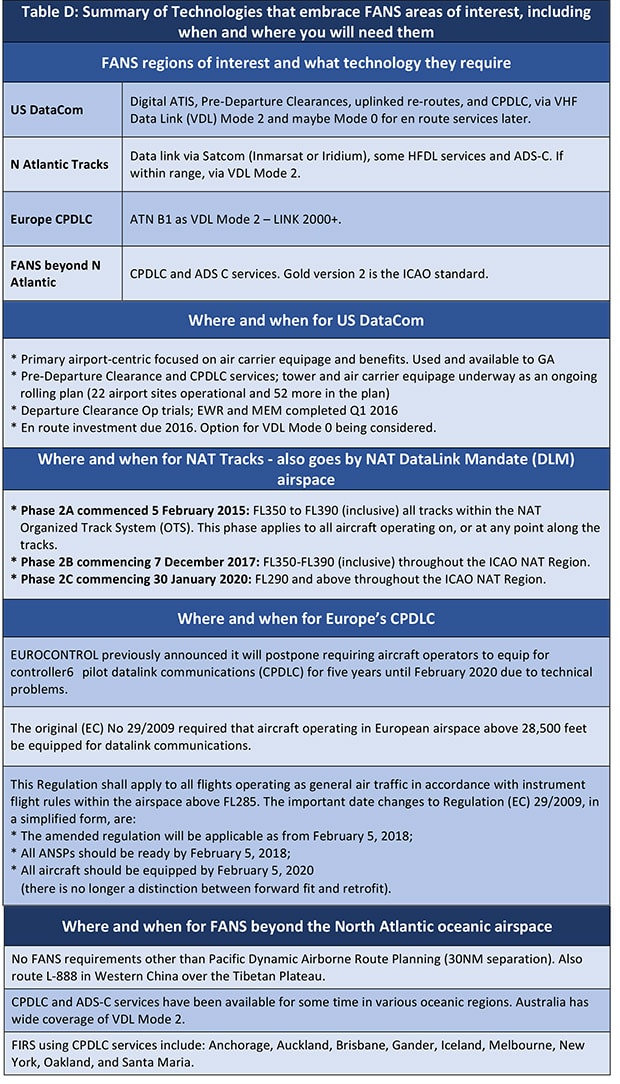 Because of the fractured nature of FANS implementation, no one is checking on which or how many aircraft are equipped. Mostly the larger business jets with oceanic reach already have FANS when delivered or are offered a factory service bulletin and in some cases, may select an aftermarket upgrade.

Table E includes a few recent FANS announcements. Bear in mind, many new aircraft have FANS or phased factory programs to equip. The voluntary take-up by pre-owned operators is, however, a different story. Equipage decisions may be taken as part of aircraft transactions or because the regions where operations are conducted include routes that require the use of FANS.

While saving the coverage of Performance Based Navigation’s exciting progress for Part 2 of this article, here we will cover two not-so-noticeable aspects of NextGen and their status.

Runways at major hubs and airports are used for departures, arrivals or both at the same time. There are peak periods and slow periods. There are parallel runway operations with lateral separation limitations, and there are in-trail separations. Each airport is different and in the wider context, each group of airports (Metroplex) is different. In the US and elsewhere, we have been slowly implementing changes to the way we separate aircraft on approaches and departures in order to increase runway capacity, especially during peak periods and where parallel operations may be conducted independently at the same time. 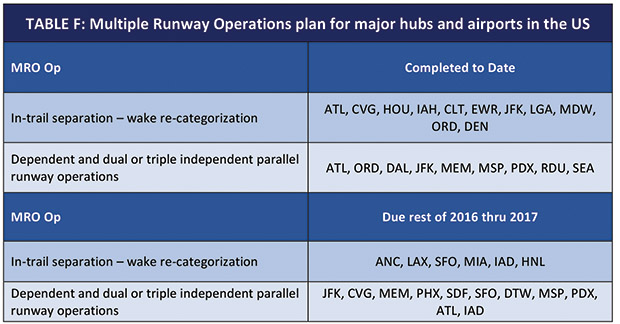 Now that there are a number of these new procedures in place, the FAA and industry are monitoring their performance. Results are early and much work is still to be done. Business jets and other ‘not so big’ aircraft are impacted by these changes, and not always negatively.

What is most important for the business jet operating into large and busy airports, is to avoid, where possible, peak times and to equip with technology that allows approaches and landings, where those not equipped are forced to find other means.

Surface: In many ways the surface elements of NextGen involve a lot of ‘behind the scenes’ activity. Technologies such as Advanced Electronic Flight Strips (AEFS), System Wide Information Management (SWIM) and Terminal Flight Data Manager (TFDM) are all tools to streamline the flow of information.

Control towers, TRACONs and ARTCCs all need to be on the same page. With an anticipated rapid growth in airspace users, including unmanned vehicles, quickly conveyed and reliable traffic flow information is crucial.

Aside from information flow, there is the management of the aircraft on the ground at each airport to consider. Expect to see a number of changes to ground operations in the coming years, especially at major hubs or airports where traffic volume is greatest.

NextGen worldwide, under any banner, cannot be sustained without funding and a commitment from industry to equip - both of which present huge challenges. The pace of implementation needs to be measured against the usefulness of airspace changes to the users.

The special interests of the different user groups should be considered collaboratively at every step of the way. Having seen and participated first hand, I have to say industry and government shared participation to reach consensus has been outstanding. Ten minutes spent at https://www.faa.gov/nextgen/ (including Performance Snapshots), as well as ten minutes at EUROCONTROL’s SESAR eATM portal https://www.atmmasterplan.eu/, will be well worth your time, to see for yourself the progress made.

Finally, there is one concern that deserves mention, especially since it applies to most of the NextGen technologies. The reliance on satellites without adequate back-up is a dilemma realized by FAA and other government authorities around the world. Some regions attempt to solve the issue by developing their own satellite networks, but at the end of the day, vulnerabilities apply to all.

Satellite interference, signal blocking and tampering with signals at airports, is a safety and usability issue for everyone.

In Part 2 we will address this further, at least with respect to Performance Based Navigation (PBN).