What does ‘Data to Inform’ cover, and why is it important to NextGen (Concluded)?

Ken Elliott completes his discussion of why collecting and analysing aeronautical data is fundamentally important to more efficient operation of business aircraft as well as capitalizing on emerging airspace mandates.

Additionally, Data Access Recorders (DARs) can record thousands of elements at high data rates from the aircraft’s digital buses. All these points of raw flight data can be linked from any worldwide airport to air carrier operations via the global system for mobile communications (GSM) or the internet. Also, when on the ground, USB connections or wireless connectivity allow easy and fast downloads at the aircraft.

Flight data are usually encrypted and compressed for security and ease. While FOQA information is unprocessed except for being desensitized, Flight Data Monitoring (FDM) provides meaningful results for analysis of cause, for example.

For both data and communications over Data Comm, on May 27, 2014 the FAA announced a security control audit of Data Comm to ensure that proactive protection methods are being implemented. This includes contingencies up to and including a complete loss of Data Comm services. Furthermore and related, on March 2, 2015 the FAA issued a policy statement regarding an existing recording rule that was well received by operators and gained widespread industry support.

Part 121 and 135 aircraft Cockpit Voice Recorders (CVR) are currently required to capture Data Comm as well as existing voice activity. Many legacy aircraft, however, could not comply, and the industry was not updating to the new CPDLC equipment. Under this new policy, the CVR recording requirements are separated between aircraft built before December 6, 2010 and those built after that date.

Real time Aircraft Condition Monitoring (ACM) is available from several avionics suppliers through aircraft OEM programs. Using ACARS or Communication Management Units (CMUs) via Satcom, in-flight performance and maintenance events as well as aircraft performance trends can be monitored in real time, on the ground. This process enables troubleshooting and planning in preparation for the aircraft’s return to the ground.

More significantly, ACM can enable flight departments to arrange service or repairs at remote locations, including internationally. A problem detected in-flight and condition (repair) codes transmitted to the ground establish an opportunity for the operator or his maintenance provider to position equipment and resources at forward locations, especially during extended international trips.

Additionally, EFBs that generate or serve as a central point for significant information, can be directly interfaced to Data Comm providing meaningful real-time intelligence to and from an aircraft in flight, especially if they are operated in the background and not allowed to be a distraction to the flight crew. Additionally tablets approved for inflight use are portable so two-way data activity, as well as review, can be conducted in the comfort of the FBO or flight department. 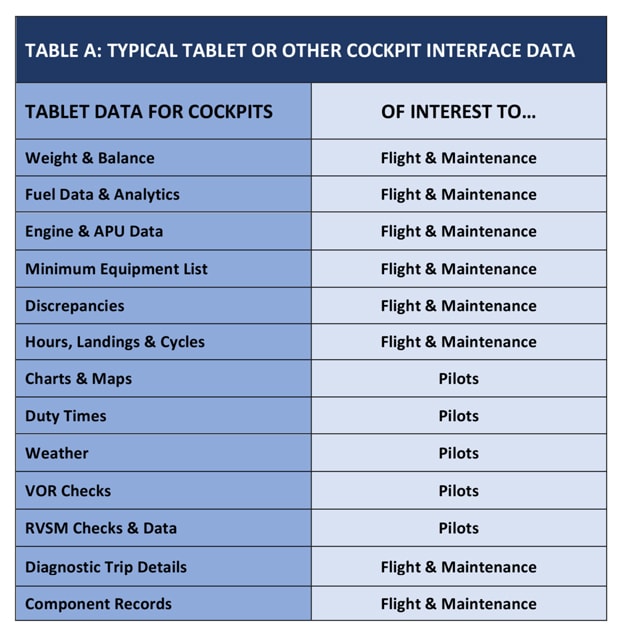 Some tablet applications, existing for data acquisition, mostly serve the specific purposes of fee-based service providers, but they also provide significant benefit to flight crews and ground personnel. Other tablet applications are cockpit weather and performance tools that, when given pilot input, will provide very useful information in return. These applications of course can be tailored to the individual user’s need. A quick search of application stores will help find the right one for your flight department.
Aircraft OEMs also now embed complex data acquisition, processing and transferring mechanisms within modern cockpits. Subject to customer authorization, this technology allows the OEM to directly monitor aircraft in-flight health & performance and advise customers on issues or concerns.

OEM field service representatives can interact with technicians and pilots with remote troubleshooting assistance, using real-time diagnostics from the aircraft.

Admittedly, the OEMs also benefit from these aggregated statistics to improve long-term aircraft development, which is a win-win for aircraft designers and operators alike. Corporate aircraft health and performance monitoring consists of the following elements:

o The connection air to ground;
o Real time gathering of aircraft data;
o Security of data from end-to-end;
o Analysis of data useful to both OEM and operator.

Keep in mind that real-time data linked to the appropriate field service provider can be a powerful cost- and time-saving tool for flight departments, both at home and away.

Data Comm, as a means of transferring information, allows two-way data exchange between pilots and air traffic controllers. Negating the need for voice communication, it provides an ability to have uplinks simultaneously sent to flight departments on the ground when FMS messages are being received by the flight crew. Data Comm includes both Controller Pilot Data Link Communications (CPDLC) and Future Air Navigation (FANS) protocols.

A wide range of information covering safety, health and performance monitoring can be sourced, grouped into data packages, transmitted, stored or downloaded from business jets and turboprops. This exchange is useful for operators, flight departments, maintenance technicians, owners, shareholders, CFOs, regulators and others.

All data should be protected, end-to-end, with security, de-identified as necessary and filtered or managed for useful purposes. It may be used to inform complex metrics for NextGen or to directly assist the efficiency and operation of flight departments.

With real time reporting and field service mobile or on-line assistance, a whole new world of customer support opens up to operators.

Above all, it is becoming easier and more economical to access and analyze aircraft data, so that flight departments and owners are increasingly including this emerging technology in their aircraft purchase toolkit.

Find Avionics for Sale on AvBuyer