Few business tools better lend themselves to progressive upgrading than aircraft in general, and business aircraft in particular. The options for enhancing the utility of an aircraft are just that broad and deep and the economics hold broad appeal with significant benefits – especially in tight financial times. 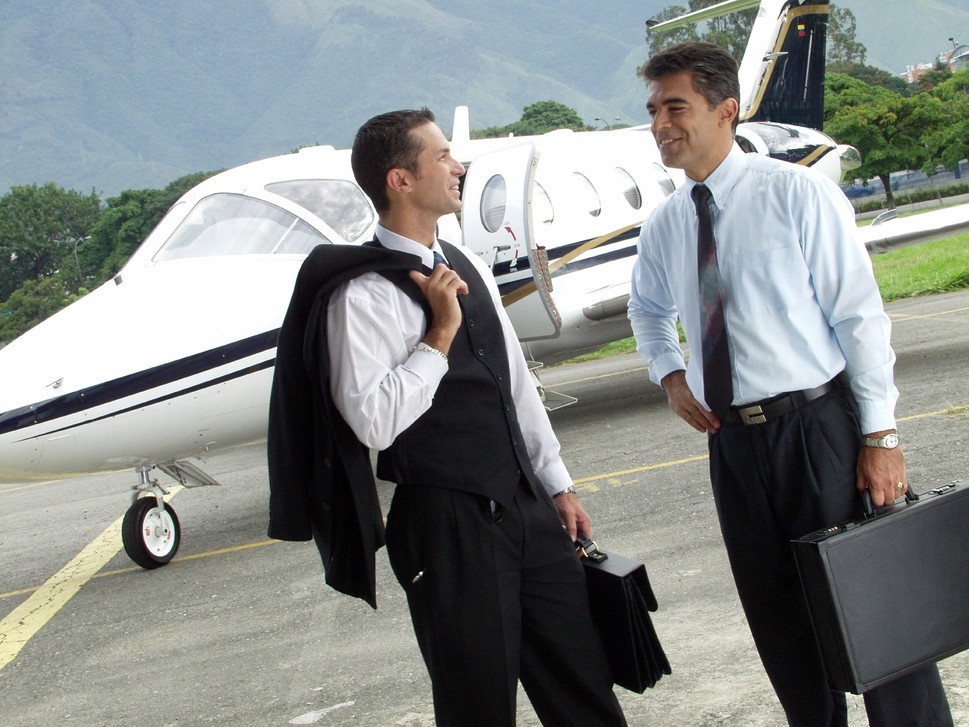 Few business tools better lend themselves to progressive upgrading than aircraft in general, and business aircraft in particular. The options for enhancing the utility of an aircraft are just that broad and deep and the economics hold broad appeal with significant benefits – especially in tight financial times.

And nowhere are the options richer than in cockpit avionics. From replacing individual radios to revamping entirely the full breadth of an instrument panel, there are options applicable to practically every model of airplane, from pistons to propjets to turbofans.

There are aircraft and times for which operating economics drive a replacement decision; times where the aircraft, for example, employs powerplants that are particularly uneconomical to operate and a replacement may be the smarter option – unless an engine upgrade is available, as sometimes is the case.

Many an older, still viable turbine lacks all of today’s modern cockpit accoutrements, however: These offer no electronic display screens for instruments, no moving maps, no GPS, no Mode S, no lightning or traffic detection. Perhaps the panel has the early solutions to electronic flight instrument systems - the old-tech cathode ray tube with their own disadvantages. Ultimately, a panel makeover can fix those shortages and add new capabilities to the airplane.

To access those new runway ends requires a WAAS GPS meeting the appropriate TSOs – and being installed and approved as a compliant installation.

There are other tools and capabilities that were unavailable only a decade ago: Satellite-based weather datalink, for example, offering pilots a view of weather unavailable from on-board radar. Lightning detection has also advanced considerably in recent years, with new color-depiction systems that enhance the tool’s utility. And don’t forget the NextGen tools that will be required by the end of the decade – most particularly Automatic Dependent Surveillance-Broadcast, or ADS-B.

All of these are available to older aircraft, while many airplanes with older versions or a few of these tools can get the latest versions and their full capabilities with some panel work. The type of airplane eligible in this upgrade-ability category is close to the entire list of post-WWII aircraft, thanks to the broadening availability of WAAS GPS solutions. And more is on the way.

Needless to say that the options are that broad, with some of everything available for almost everything – while some other avionics upgrades target renewal of a specific model with a specific package approved solely for that model. Here, we’ll give you a snapshot of both approaches.

Many, many helpful changes
If you’re flying an older airplane with spinning-mass gyro instruments, aneroid driven air-data sensors, transistorized radios or a pre-WAAS GPS, then you’re in good company… and you’re also missing out on some of the best advances in avionics, most of which have arrived in the past decade.

If you’re flying behind CRTs you’re carrying around some heavy, power-hungry equipment that also pose increasingly high maintenance issues. And they still won’t let your stack deliver all the options available today – those advanced-lightning detection systems or satellite-based weather datalink images among them. You could gain from digitally tuned VHF radios that weigh less, consume less and need comparatively little in terms of maintenance.

GPS technology has also evolved considerably since the first panel-mounted units appeared in panels a couple of decades back – to the point that many portables and Electronic Flight Bag navigators exceed the capabilities of the one in the stack. IFR options for GPS are - as noted above - ahead of ILS choices and growing at an enormous rate.

In summary, the old equipment is heavy, power-hungry, and maintenance intensive…so why keep using it? You can erase all of these shortcomings with a smartly planned panel upgrade.

In place of the heavy, hot CRTs consider today’s modern Liquid Crystal Displays. The LCDs use less power, generate more colors, produce sharper detail – and a whole panel full of them may actually weigh less than that one CRT that used to be your Primary Flight Display (PFD). The WAAS GPS will deliver new capabilities – and get you part way to satisfying the 2020 mandate for ADS-B Out. The digital radios use less power, weigh less, and need less space – allowing them to be built into boxes housing multiple other capabilities. And even today’s new transponders bring the benefits of the ‘modern micro-electronics, all-digital’ revolution.

According to most purveyors of the systems profiled below, savings in maintenance costs can cover a full panel replacement in as little as six years. You’ll also gain some useful load in the upgrade, because of the heft of equipment removed – and that’s not to mention a cooler panel and reduced demand on your aircraft’s electrical system.

There will of course be an up-front investment and downtime for the aircraft, ranging from a few days to several weeks - depending on the work package. You’ll probably need to invest in some training on using the new package, too. But when it helps deliver you in conditions the old stack couldn’t handle; when it costs you less to keep and run; when you see fewer down-days and fewer avionics shop bills as a result, you’ll find yourself far happier.

Gulfstream’s PlaneDeck Retrofit
Gulfstream knows its customers, and the types of advances those customers want to see in new models out of Savannah. It obviously knows its customers well enough to know that some would prefer to keep flying the Gulfstream they already own as opposed to move up to a newer model – particularly if ‘moving-up’ simply procures the flight crew better capabilities.

With the Gulfstream’s PlaneDeck retrofit, any post-GIII model can be updated with almost all the latest technologies found on the newest models. Models eligible include GIV, GIV-SP, GV, G300 and G400 models.

The PlaneDeck upgrade replaces older instruments and CRT displays with new Honeywell DU-885 liquid-crystal screens, as well as other supporting hardware. The changeover adds new capabilities to the old aircraft, including XM satellite-based graphical weather, solid-state electronic charts, high-resolution moving-map graphics and the ability to display video from other sensors, such as an Enhanced Vision System (EVS) sensor.

Through this upgrade older Gulfstreams can be put on a path to further enhancements, some of which will be required in the coming years. WAAS GPS (and those LPV approaches), RNP capabilities, ADS-B Out and ADS-B In, FANS 1/A datalink, and new weather and traffic detection systems can also work with the upgraded panel.

Managing the PlaneDeck panel on upgraded aircraft is similar to using the system in new Gulfstream models; through a pair of Cursor Control Devices mounted on the side consoles.

Plan on 10 to 12 days for installation, depending on the aircraft and options selected. Your airplane will also shed some weight over the process with the removal of the old hardware and the supporting avionics ductwork and cooling fans.

Rockwell Collins’ Pro Line Update
Thousands of aircraft fly with Rockwell Collins’ well-regarded Pro Line 4 system, and many of its components remain viable and efficient tools in the cockpits they occupy. But CRT screens are yesterday’s technology. Rockwell Collins sees this obsolescence as underpinning its Pro Line 21 upgrade package.

In the Pro Line 21 upgrade the old CRT displays are replaced with modern LCD screens – screens which, again, weigh less, take up less space, consume less power and produce less heat, all while offering greater flexibility in their use.

Rockwell Collins holds STCs for the upgrade to Dassault’s Falcon 50EX, Falcon 2000, and 2000EX, and nearly 30 other airframes ranging from propjets to long-range turbofans. The number of upgrades installed already runs near to 300.

Honeywell’s Primus Elite
From another corner comes Honeywell, which boasts thousands of aircraft flying on old Primus 1000/2000/2000XP, SPZ-8400/8500 and SPZ-8000 packages. With Honeywell’s Primus Elite retrofit package the operator can gain the benefits of LCD displays for showing charts and maps, XM satellite-based datalink weather, and hazard-sensor display such as the video feed from an Enhanced Vision System (EVS) camera.

Primus Elite upgrades are available for a broad variety of Bombardier, Cessna and Dassault aircraft, among other types. Each package is tailored to the airframe.

Garmin’s ‘G-Whiz’
Retrofits from Garmin cover a wide range of business aircraft, from piston to turbine, and provide a variety of enhancements. For example, for aircraft eligible for the G1000 retrofit the gains include all new WAAS GPS sensors, VHF Nav and VHF Comm radios, plus traffic, weather and ADS-B compatibility. (King Airs are among the aircraft most-often upgraded with the G1000 package.)

Downscale a bit, and more-limited packages for pistons to light jets exist via the G500 and G600. These units [the G500 for aircraft up to 6,000 pounds, the G600 for aircraft above that weight] replace only the flight and air-data instruments while adding the enhancement of a full-featured moving-map display in the same bezel. The packages also include solid-state air- and attitude-data sensors.

No changes are made to the radios and navigation system hardware – though Garmin offers equipment to handle those upgrades as well. Those radios would be the new GTN650 and GTN750 WAAS GPS navigators, Comm and Nav all-in-one packages. As the successors to the GNS530 and GNS 430s, the GTNs offer more inputs for weather and traffic sensors, integral terrain alerting, ADS-B Out compatibility – all of it controlled through touch-sensitive screen interfaces.

Garmin also offers some new ADS-B solutions that are self-contained – that is, with position sensors that aren’t available for navigation programming, while satisfying both the ‘Out’ mandate and the desire for ADS-B ‘In’ among many operators.

As with many of today’s upgrade options, the Dassault EASy II upgrade satisfies the coming requirement for ADS-B ‘Out’ as well as the future Controller/Pilot Data Link service bulletin.

Aspen Avionics Evolution
The ‘Evolution’ revolution spans the field from piston to light jet aircraft through multiple packages that allow the replacement of two flight-data instruments with one plug-into-the-same-space Evolution 1000 PFD package; replacement of four instruments with the addition of the Evolution 1000 MFD companion and the gain of a fully redundant package of flight, nav and air-data instruments – each with its own stand-alone backup power.

You could replace all six of the Standard ‘Six Pack’ by adding an MFD 500, at which point the cross-display options reach to a staggering level.

Aspen also offers its own stand-alone stand-by instrument package to back up other EFIS stacks with a fully redundant combination PFD/MFD – also with its own stand-by power built in. The Aspen package’s low prices and low installation costs have made them hugely popular with operators of many an older airplane.

Other players and packages
Universal Avionics offers the EFI-890 Panel Upgrade through STCs for more than 20 aircraft, among them the GIII, some early Falcons and more – and meanwhile, companies such as Duncan Aviation offer some packages of their own.

Innovative Solutions & Support provides Integrated Flight Management Systems (IFMS) and air data systems upgrades for several business aircraft, from the Eclipse Aerospace Eclipse 500 to the Pilatus PC-12 and beyond to the GIII and some BBJ models.

And this just hits the high points of what’s available and currently in shops. Options from CMC Esterline in Canada are available based on the L-3 SmartDeck the Canadian company acquitted in 2010. Ultimately, the bar never stops moving in this upgrade arena, with more aircraft being made eligible for more packages on an ongoing basis. Blink and you could miss something!