How Avionics Interface with the Aircraft’s Systems

Continuing his Avionics 101 series, Ken Elliott discusses avionics in general, and how a business aircraft’s avionics interact with other on-board systems…

It is an important point to make right at the outset of this article that ‘avionics’ and ‘electrical’ are two different aircraft systems. Avionics covers the aircraft electronics over two major areas, i.e., the cockpit and the cabin.

The term Cockpit Avionics includes all remote components, cockpit displays and controls that govern and operate the three core functions of Communication, Navigation, and Surveillance (CNS).

The term Cabin Avionics largely relates to anything electronic that is utilized by passengers and cabin crew, such as the entertainment system.

The avionics are what connects the aircraft to the outside world, making sure it flies where you intend it to go, while constantly on the look-out for other aircraft, terrain, obstacles and adverse weather.

Avionics also entertains those fortunate enough to experience the delight of a private flight. And, in newer aircraft, avionics surveils onboard airframe and engine systems, and either records, or virtual live-reports, on the overall aircraft’s in-flight status.

The best way to understand the electrical system of the aircraft is that it is all things power-related, including the power needs of avionics. After electricity is first drawn from the aircraft battery, or provided afresh from an aircraft generator, it then enables anything that requires electrical energy (from raising and lowering the landing gear, all the way to an engine start).

While the electrical system works with volts and amps, the avionics system utilizes the waveforms of the electromagnetic spectrum, and bits and bytes for data sharing. Physically, the electrical supply is enabled and controlled from the cockpit, with each separate power circuit being breaker-protected.

Some of those breakers are grouped and dedicated to avionics, allowing the pilot(s), when necessary, to isolate any single system from its power source.

Avionics breakers reside on a dedicated power bus, energized from an Avionics Master switch. There will be a separate Cabin Master switch for cabin power and system breakers.

The breakers control the functions of cabin entertainment (considered avionics), galley and passenger lighting. (Figure 1, below, demonstrates how electricity provides the power for avionics and other major aircraft systems.)

FIGURE 1: How Electricity Powers Avionics and Other Aircraft Systems 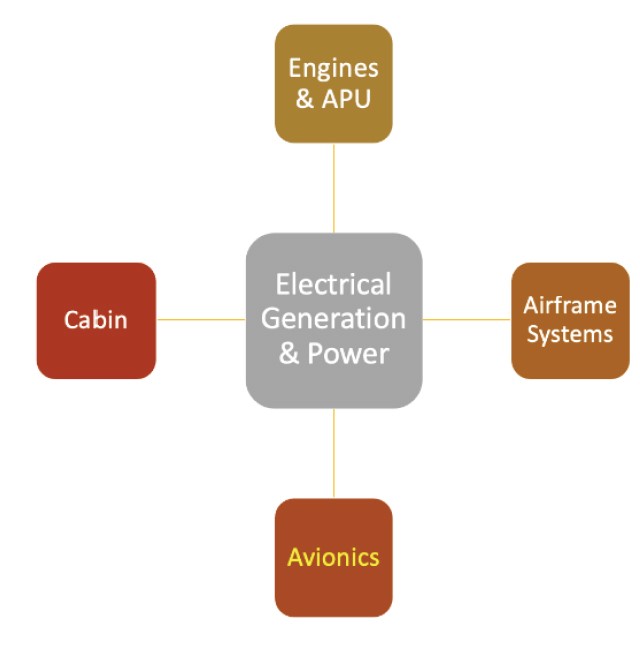 How do Avionics Relate to the Other Aircraft Systems?

As outlined in Figure 2 (below), there are seven fundamental and separate aircraft system groups that are found on any Light, Mid-Size or Large business jet. The avionics integrate with many of the seven groups. Note how avionics plays a major role in the cabin, a focus of aircraft owners and corporate principles.

FIGURE 2: The Seven Fundamental Systems on an Aircraft 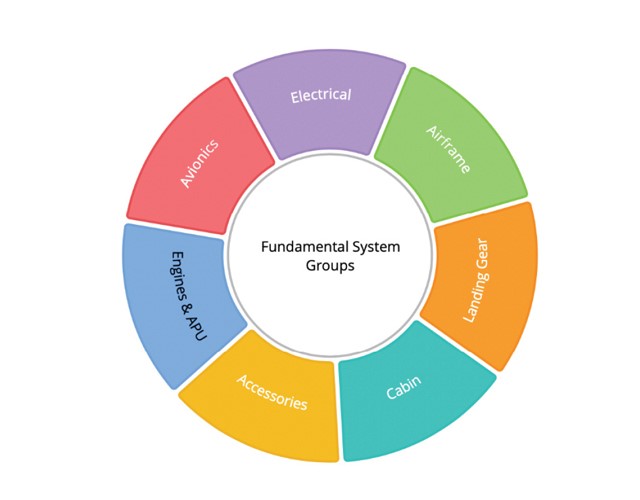 Examples of Avionics Integration to Other Fundamental System Groups

Over the decades electronics have replaced a significant number of mechanical and analogue aircraft functions. Bidirectional messages, status and commands are shared across wiring, Wi-Fi, or Bluetooth in place of mechanical and manual motion. Furthermore, bits and bytes of data are employed instead of switches and relays.

This movement toward automation saves on weight, space and energy, increasing reliability, and providing for a clean, clutter-free cockpit. Below are just two examples of where avionics are deployed to accomplish engine(s) and then airframe functions.

While the EEC (ECU) is physically mounted on the engine, it relies on data to and from the aircraft, including the avionics. One example of the engine-avionics integration is the Flight Management Systems (FMS). This sub-system provides runway length, wind conditions and altitude information to the FADEC, via the EEC. In turn, the EEC can adjust the engine fuel demand and thrust for take-off.

The FADEC then provides crucial engine status and performance data back to cockpit avionics displays for crew monitoring. During flight it can either automatically, or upon request, download the same data via the aircraft’s satellite data communications.

With respect to the airframe, the avionics translate electronic messages into analogue functions. One example is the flight control system that computes a motion command and then sends it to one of several autopilot servos, to mechanically operate moving surfaces.

For pitch, roll, yaw and trim, the autopilot completes its functions in real time. The autopilot senses and feeds back the new position of an aircraft’s moving surface, so the flight computer command will stop once the instruction has been satisfied.

Increasingly, micro-sensors are being deployed to provide the performance status of different aircraft subsystems, down to modular level.

Avionics sensors monitor, relay and even record status information. Quick Access Recorders (QAR) are standard on new corporate aircraft, and are being added to pre-owned models too. These small modules can pack a punch in data storage capability, informing flight departments about the in-flight performance of major systems.

Because of avionics’ ability to monitor aircraft subsystems, messages can be generated and displayed in front of the pilots, in various priority colors, to reflect their importance. All this data sourced from micro-sensors can be further relayed to the ground, via the avionics Satcom system, virtually in real time.

So, What Does ‘Avionics’ Consist Of?

Although avionics can be separated into cockpit and cabin systems there are some features, such as Satcom, Wi-Fi, Bluetooth, Internet and some audio functions that are shared by both.

Cockpit Systems CNS: While avionics relies on, and integrates with, many aircraft sub-systems, it is centered on the three fundamental functionalities of Communication, Navigation and Surveillance (CNS).

Table A sorts the various features of cockpit avionics under the CNS functions. Note that the recent ability of avionics to monitor and report on aircraft on-board systems is tabled under surveillance, as ‘Data Acquisition’. 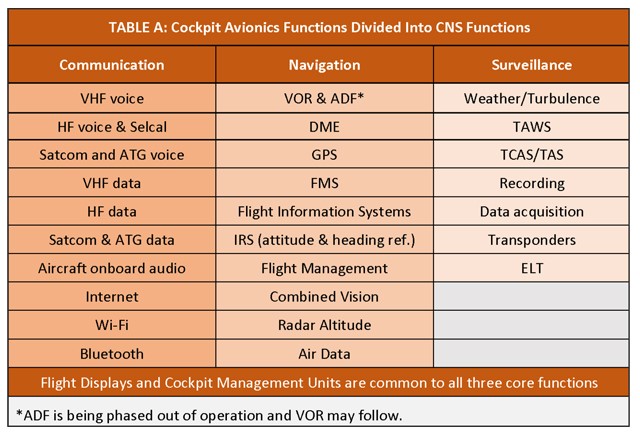 Systems or features, such as CPDLC (FANS, ATN, and VDL), RVSM, ADS-B, 8.33KHz, PBN, and FM Immunity, either emerged from a single primary function (RVSM from Navigation) or from a combination of functions (FANS 1/A+ from Navigation, Communication and Surveillance).

However, these are features and not systems in themselves. Of course, there are many features within cockpit avionics, but the ones shown were mandated in some fashion to meet airspace requirements. Other mandates specifically required new technologies, as product, such as TCAS/TAS, TAWS and ELTs. These are systems within themselves.

Cockpit avionics are typically duplicated for dual pilot operations, with safety and redundancy being crucial. In some larger aircraft the FMS and IRS may be triplicated.

An important takeaway of duplication is to prevent a single point of failure within any primary aircraft flight feature. In themselves, individual avionic modules may also contain dual channels of operation. This is common for flight control and autopilot systems.

For aircraft safety, the flight crew enables (and in an emergency can deselect) vestibule, cabin and galley power. The cockpit crew can communicate with individual passengers and cabin crew. They can brief the cabin occupants via passenger address. Passengers also have call features, including in the vanity compartment.

Airshow moving maps, with current information on the aircraft’s position, accept data directly from the aircraft navigation system, while stored media is available to provide hours of entertainment throughout the cabin. Table B lists the popular cabin electronics and provides some context to them. 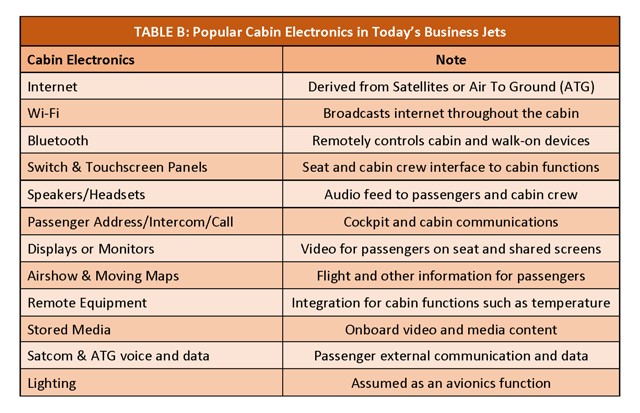 How Do Avionics Communicate Internally?

Correspondence between avionics subsystems is an evolution. Today we use superfast digital bus networks between physical modules and cards (mounted within card cages). The bus distribution is carefully managed and prioritized. Bus management includes concentration and conversion of data. This modular approach is termed Integrated Modular Avionics (IMA).

Despite technology advancement, there are still hundreds of analogue actions taking place on-board a typical business aircraft today. The digital signal must convert over to a voltage to operate any physical relay or switch. Analogue voltages are used to operate motors, servos and other mechanical devices.

These formats define protocols for data communication within and between aircraft systems. Avionics equipment manufactures need to protect proprietary data transfer between shared components and connected systems, and this is achieved in several ways, including in collaboration with the aircraft manufacturer.

(Because cockpits and cabins are so integrated with the total airframe, aircraft manufacturers prefer to work with a single primary avionics vendor, providing a branded avionics suite.)

Due to proprietary buses, many third-party avionics vendors are excluded or limited from connecting to them. Methods of securing a closed system design require discrete configuration via key codes and unique software.

How do the Pilots Interact with Cockpit Avionics?

Side ledges host electronic flight bags and secondary analogue controls. These may also be found in the aft pedestal and sometimes in the overhead panel. Mostly the cockpit overhead space is dedicated to power bus control and Head-Up Displays (HUD), where installed.

For pilots, the various cockpit panels should be ergonomic, efficient and de-cluttered, providing the ability to crossover pilot and co-pilot data at will.

The one or two displays directly in front of each pilot are considered primary and are intended to replace the existing pilot and co-pilot T-configuration typical of legacy primary flight instruments.

Other significant displays are the Multi-function Flight Display (MFD), and sometimes a forward pedestal master display panel. The MFD offers a selection of secondary features, including radar, weather, maps, status, flight plans, enhanced (and/or synthetic) vision, and more. Being touchscreen, all the panels are interactive.

When installed, a forward pedestal display is used for data entry and other secondary features.

In exponential leaps, avionics is developing into an aircraft central nervous system, orchestrating and prioritizing more and more functions, from engines to communicating with ‘walk-on’ devices.

Micro-sized electronic chips have increased their individual capacity to manage data and enable avionics that monitor, record, and broadcast on-board aircraft activity, in real-time. Subject to proper design and configuration of software, decisions made electronically are faster than those made by humans. This, in turn, leads to greater automation and the eventual acceptance of artificial intelligence.

Progress made with unmanned and eVTOL development, is transforming modular avionics. There are fewer opportunities for single points of failure. System reliability and available options have also improved. The pilot’s workload is now moving from action to monitoring, and from reaction to proactive cockpit resource management.

Airframe mechanics have avionics included in their training, and avionic engineers stretch their capabilities to integrate designs into remote aircraft components. The different professions of the aviation industry are consolidating knowledge, where functions are managed more by predictable electronic means, than by less reliable analogue functions.

Future Avionics 101 articles will cover communication, navigation, surveillance, and entertainment individually. There will be a greater focus on information useful to owners, operators, consultants and brokers alike.