With the Covid-19 pandemic, focus has sharpened on the air-filtration systems that purify aircraft cabins and help prevent the spread of infection. But just how good are the systems installed on today’s business aircraft? Chris Kjelgaard reports…

As a result of Covid-19, cabin air-filtration systems in business aircraft are garnering a greater level of attention among operators and passengers than they probably ever did before.

Such systems form the primary line of defence against the possibility of passengers and crew becoming infected by what is a potentially fatal disease. In order to understand how well the cabin air-filtration systems in modern business aircraft protect crew and passengers – from Covid-19 and other pathogens in the air circulating in the aircraft cabin – it’s necessary to know how the systems work.

Essentially, they employ any two of three state-of-the-art methods of filtering vanishingly tiny particles of disease and pollutants out of the air. Those methods depend on the cabin air circulation system the aircraft OEM has chosen for a given aircraft model, or range.

Tied integrally into the cabin’s Environmental Control System (ECS), each type of air-circulation system draws bleed air from the engines to provide breathing air in the cabin.

However, one type deliberately allows for a degree of recirculation of the inducted air—and typically recirculates the air throughout the cabin for two-to-four minutes before it’s expelled through the fuselage outflow valve and completely replaced by fresh external air—to provide thermal comfort.

Importantly, air recirculation helps mitigate the issue of low cabin air humidity, which is ever-present in aircraft whose fuselages are made from metal alloys that are potentially vulnerable to corrosion.

“Cabin humidity is a challenge in aviation, mainly due to the fact humidifiers tend to be complex and heavy, and humidity may in some cases cause corrosion in the aircraft structure,” says Alvadi Serpa, Director or Product Strategy for Embraer Executive Jets.

To help maintain safe and comfortable humidity levels within its products’ cabins, and without the need of complex and heavy humidifiers, Embraer offers recirculation systems for its Phenom and Praetor series business jets.

Even where OEMs decide to allow some air recirculation in their business aircraft cabins, such air is never allowed to become stale.

Textron Aviation employs the same limited-recirculation philosophy in its Cessna Citation Longitude and Latitude jets. “These aircraft take a small percentage of the cabin air and recirculate it through a High-Efficiency Particulate Air (HEPA) filter back into the cabin,” says Joshua Kelton, a Senior Engineering Specialist for Textron Aviation.

“In addition to recirculated air, fresh air is always provided, ensuring air is refreshed every two to four minutes.”

In all modern aircraft which use air recirculation the HEPA filter technology highlighted by Kelton forms a fundamental and vital part of the ECS’s defense against airborne transmission of microbial and contaminant particles throughout the cabin.

International regulations require HEPA filters to trap and remove from the air at least 99.97% of contaminant particles of 0.3 micrometres in size or larger. This allows the HEPA filters within cabin air-recirculation systems to remove all bacteria, some viruses and most air contaminants from the air the occupants breathe. 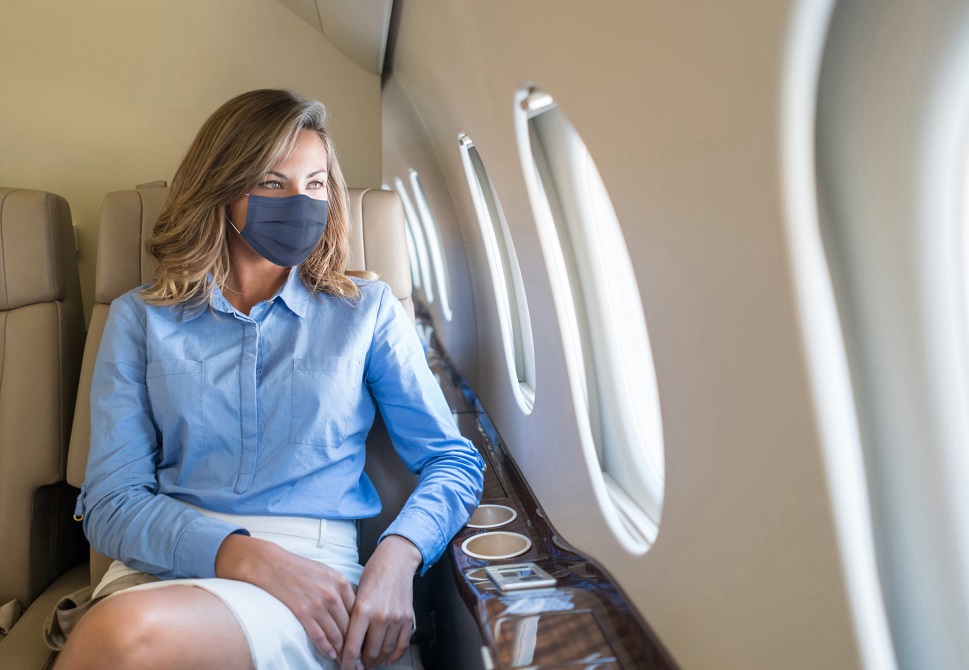 However, in terms of HEPA-filter functionality OEMs can do even better. According to Laurence Casia, Manager, Industrial Design for Bombardier Aerospace, the patented ‘Pũr Air’ system Bombardier installs in all its Global-series aircraft features an advanced HEPA filter that captures up to 99.99% of allergens, bacteria and viruses that are 0.3 microns or greater in size.

Bombardier is convinced that combining limited air-recirculation with advanced HEPA filter technology – as its Pũr Air system does – remains the best solution for large business jets.

“Considering the focus on HEPA filters that we are seeing in commercial aviation, including by Boeing and Airbus, and the proven effectiveness of these solutions, we expect HEPA technology to remain the gold standard for large-cabin business jets, which can fly for longer periods of time and carry more passengers,” says Casia.

Meanwhile, most – if not all – current-and recent-production Dassault Falcon business jets employ limited-recirculation systems, according to according to aircraft brokerage and market-intelligence firm Jetcraft Corp.

Gulfstream Aerospace, meanwhile, has adopted a cabin air-circulation philosophy aboard all its aircraft models, which is different to that Bombardier employs in its Global-series jets. In addition to Gulfstream, most other leading business aircraft OEMs —including Bombardier—also employ this second major type of system in at least some of their models.

By means of the fact that this fresh air is bled from the engines’ high-pressure compressor stages—ultimately for use as cabin breathing air—before entering the combustor, “outside air is intensely compressed and heated, resulting in extremely clean and sterilized air, before it is cooled and released into the cabin,” Cass explains.

“There’s no need to utilize a HEPA filter on a 100% fresh-air system,” Cass argues. “On our large-cabin aircraft, approximately 800cu.ft. of fresh air goes into the cabin during cruise conditions. That air flows through the cabin and then is expelled through the outflow valve that helps to regulate the pressure within the cabin.

“As such, the air throughout the cabin is continuously replenished every two-to-three minutes in our aircraft. This amount of fresh air is significantly more than what is required by the Federal Aviation Administration.”

Like Gulfstream aircraft, all Cessna Citation models (other than the Longitude and Latitude) “use an always 100% fresh-air system to maintain a cleaner and healthier cabin for passengers, without the additional help of HEPA,” Kelton adds. 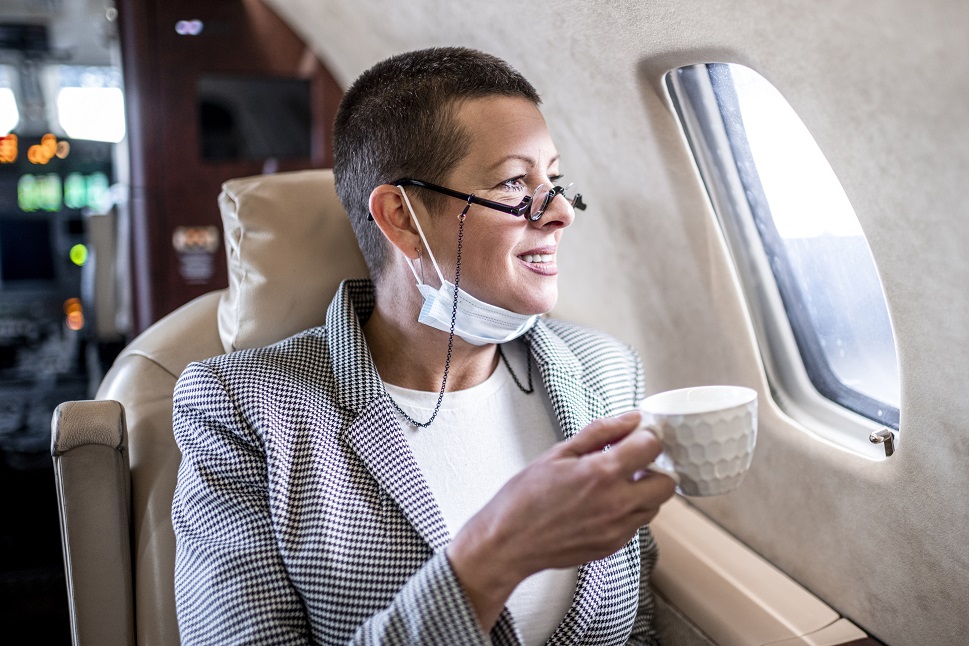 Adding to these two pre-existing cabin air-filtration technologies, a third major type of cabin-air cleansing technology has recently emerged—and it could prove the most powerful and effective one yet.

In September, 2020, Savannah, Georgia-based Aviation Clean Air (ACA) announced that the second phase of testing of the NeedlePoint Bi-Polar Plasma Ionization (NBPI) technology it had developed for airborne and ground-use air-purification systems had demonstrated 99.99% neutralization via ionization of the COVID-19 virus after just 30 minutes.

The tests, conducted by a third-party specialist testing laboratory, were performed in a setting designed to replicate the ionization conditions of business and commercial aircraft interiors.

NBPI works by using an electrical charge to create positive H+ hydrogen and negative O- oxygen ions from the water vapour in the air. These cluster round any airborne contaminant particles, causing them to agglomerate and fall out of the air.

Crucially, the ions also attach themselves to the cell membranes of all sub-microscopic biological pathogens too small for even the most advanced HEPA filters to trap, and by chemical action prevent those pathogens from reproducing—so they quickly die.

“HEPA filters that are being used on most commercial aircraft are efficient in removing particulates that are greater in size than 3 microns, but we know the COVID-19 virus is between 0.002-0.125 microns in size,” says ACA head Jonathan Saltman.

“That means that the HEPA filters may not remove the virus itself if the virus is attached to a smaller airborne particulate. Our system prevents the spread of viruses by aerosolization, which is now being shown as the primary method that COVID-19 spreads.

“The proactive system, which operates through the aircraft’s existing environmental control system (ECS), and functions automatically whenever the ECS is running, immediately improves interior air quality, eliminates odors, and neutralizes all pathogens in the air and on surfaces throughout the entire aircraft, including the cabin, galley, lavatory and cockpit,” Saltman explains.

Gulfstream also has G500, G600 and international certifications for the NBPI technology in development, Cass adds. “Even when running solely on auxiliary power, the system produces thousands of ions throughout the entire aircraft, ensuring cabin air remains pure, and surfaces are disinfected.”

Casia says Bombardier service centers throughout the world have also begun installing ionizers in its bizjet models. And other BizAv OEMs appear set to adopt the new technology imminently.

“We are working to establish a new collaboration that will enhance our offering of cabin air quality systems and provide the latest technology, which will include ionization,” Kelton says. Its formal announcement of the partnership was expected imminently.

Meanwhile, says Serpa, “Embraer is familiar with air ionization technology and is studying its suitability and efficacy for its business jet portfolio.” 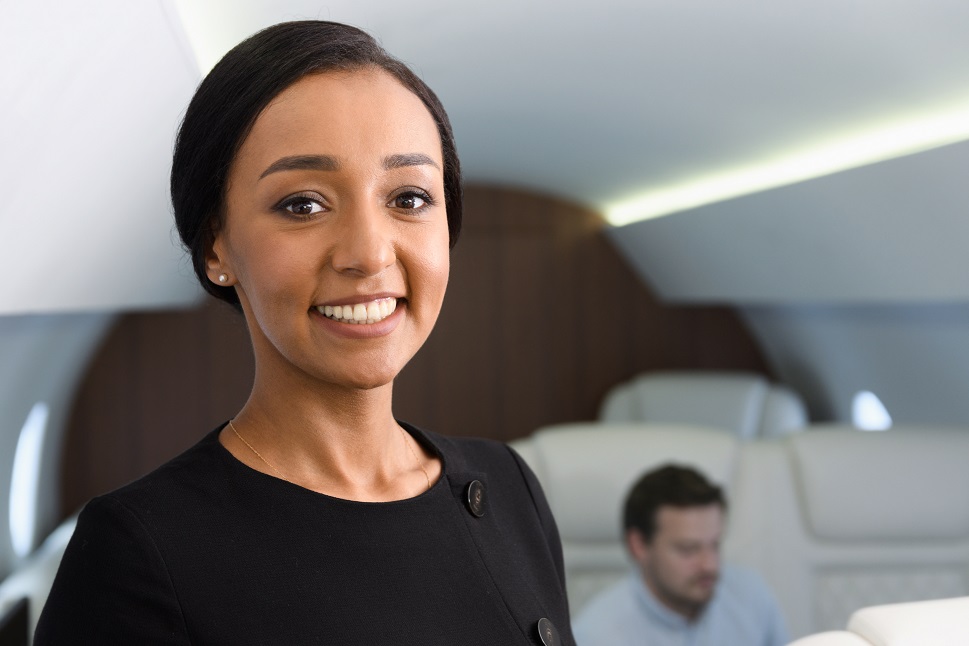 While Kelton says that HEPA systems cannot be retrofitted into Textron-built aircraft, currently, Embraer has taken a different tack…

Meanwhile, Gulfstream is already making retrofits available of ACA’s NBPI units for all G650s and G650ERs that are not already fitted with the plasma-ionization technology, and is also doing so for its G550, G450 and GV models.

The NBPI system is approved and available on all aircraft manufacturer platforms, makes and models, ACA says, so it may be only a matter of time before all major BizAv OEMs offer the new technology for both line-fit and retrofit.

The growing availability for retrofit installation of HEPA filters and plasma-ionization units means that BizAv owners and operators will soon be able to field a powerful arsenal of anti-pathogen and anti-contaminant weapons to prevent cabin occupants from becoming infected with dangerous diseases in-flight.

Find out more about Avionics in BizAv.

Are You Getting the Best From Your Jet's Flight ...
Is Cockpit Connectivity Advancing Flight Plannin...
How to Upgrade Your Cabin Electronics (Part 1)