For Electronic Flight Bags, business aviation has it all… 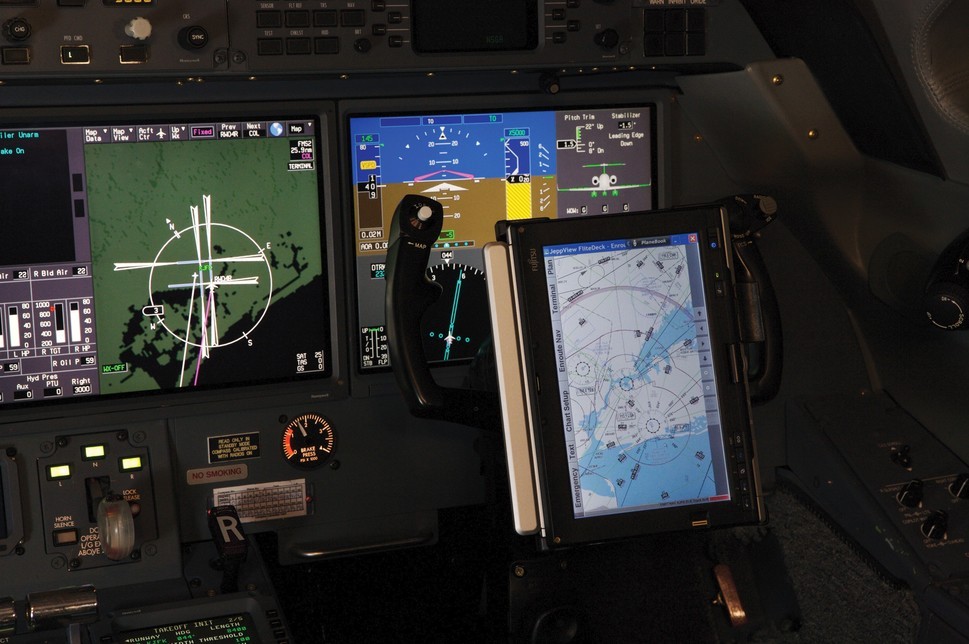 The Electronic Flight Bag has come a long way in a short space of time, notes Dave Higdon. How can they be optimized and maintained by today’s Flight Crew?

On a recent trip flying for a well-known airline, the captain and first officer took their seats in the cockpit and opened up a zipper bag that was scarcely larger than a three-ring binder and slightly thicker than a deck of playing cards. The bag held the electronic flight bag (EFB) used as the crew prepared for the flight. No charts, plates or other instrument procedures...well, none on paper, anyhow.

That same month vendors and installers noted how much General Aviation has adopted to the paperless cockpit - barely a decade after the first EFB options appeared. Preceding acceptance by the Business Aviation community, avionics makers delivered some of the first iterations of glass instruments and paperless-charts to the homebuilders represented by the Experiential Aircraft Association (EAA). This historical fact was displayed among the piston, experimental, light-sport and turbine aircraft presented at the 58th Annual Sun 'n Fun International Fly-In & Expo in late April this year.

Previously, Sun 'n Fun was the stage for the first iPad aviation applications to appear little over a week after the first hardware unit shipped. And this year's exhibits offered a wealth of tools and software for the paperless cockpit, from portable to panel-mounted – and all with amazing fidelity and color. Tools ranged from synthetic vision systems (SVS) to enhanced vision sensors (EVS) delivering clear images to cockpit displays – images that included taxi diagrams, instrument-approach procedures and all the trappings.

Today, the main differences between options for Business and General Aviation pilots, and air-transport pilots amount to little more than the hardware sources, the software employed, and the approval used (with the requisite spread in costs).

The paperless-cockpit revolution began experimentally with developers looking for a smarter way to select, carry and use what was needed from among thousands of pages of plates and procedures. They initially used early iterations of low-performance tablets running low-resolution scans of paper documents.

The move toward digitally-delivered charting information helped spur the pursuit of software and hardware that pilots could use. Add in checklists and pilot operating handbooks and you have the birth of the EFB. FAA regulations trailed technology's advance somewhat, but caught up after the revolution was largely decided by avionic OEMs, chart providers and consumers.

EFBs grew to deliver high-quality, scalable alternatives to paper—organized and usable in-flight. Reflecting the potential, today's EFBs carry checklists, aircraft manuals, logs of all types – anything and everything once printed on paper.

And all those documents reside on a device weighing about the same as two regions' paper approach plates.

Meanwhile, even before iPad and Android devices made the electronic charts the most-efficient option, avionic OEMs had already embraced technology beyond the EFB; one indigenous to the cockpit avionics - electronic charts imbedded within the glass displays of advanced cockpits .

Using cockpit displays – and, if desired, an optional connection to an EFB – everything from approach plates to standard-instrument arrivals and departures resides in the avionics system's brain. These systems work with WAAS GPS to accurately show the aircraft on the plate or procedure, in real time, as the flight proceeds.

Further, after landing, taxi-diagram programs help guide crew to the correct ramp or gate. In the process, the EFB evolved further to become the all-occasions flight-planning tool, thanks to a host of different programs. They can even serve as a stand-by navigation source!

The hook: Perform your flight planning on the tablet and wirelessly upload that plan to the aircraft’s flight management system or GPS navigator.

Consider these ‘tangible benefits’ mentioned earlier… Long after Business Aviation began embracing the all-digital cockpit environment, air carriers began to recognize some significant benefits in shedding their spare paper: The transition to EFBs let pilots lose up to 45 lbs of paper and containers by switching to a digital equivalent weighing less than one-tenth that amount.

Those weight savings, according to American Airlines, equates to some serious dollar savings… American adopted EFBs in 2013, starting with an order for 8,000 iPads (displacing about 24 million pages of paper, according to recent reports). The weight savings cut fuel use by at least 400,000 gallons annually. That's a few million dollars toward the bottom line; and savings on update costs already recovered the expense of equipping with EFBs.

There can be downsides, however, and American’s tablets made their own news in late April. It appears some crews returned to the ramp to a make a WiFi connection in order to download an update and replace a recent software change that had prevented them from seeing the information they needed.

Software updates seem to be the most-frequent cause of system hiccups, just as in years-past errors in symbols, legends or data on paper charts occasionally caused issues for pilots.

Yet receiving and replacing a few erroneous pages, or downloading a software update a second time, falls far short of the time that pilots once expended hand-filing dozens, sometimes scores, of changed procedures among thousands of approaches to hundreds of different airports. In this regard, both portable and installed systems shine.

If not capable of a wireless update via a WiFi- or Bluetooth-linked source, current systems tend to allow for easy updates via the old “sneaker net” system: Physically take a data card, flash drive, thumb drive or disc; insert into the appropriate receptacle on the notebook or panel system; and command the data update. When done watching, remove the media, store it somewhere handy and move on.

On April 27-28, American Airlines grounded flights after some update iPads crashed running their new EFB software. The crash made screens go black, forcing crew to return to an area where they could again download the update. According to the software vendor, Jeppesen, one ILS chart for Washington Reagan National Airport somehow got duplicated in American’s database.

“It wasn’t a software issue, it wasn’t an app issue,” said Jeppesen spokesman Mike Pound. “It was an issue of one chart being duplicated in their database.” Consequently the software, unable to reconcile the duplication, became unresponsive and shut down.

Checking that cockpit systems operate properly after any aviation software updates is part of the update process, whether performed by a maintenance technician or the pilot (something allowed after a rule-change last year).

The person who performs the update is responsible for checking the post-update function of the device.

One pilot interviewed likened the process to examining updated paper charts every 28 days – a laborious chore ‘back in the day’. “We always spent a few seconds looking at critical data – frequencies, waypoints, altitudes and identifiers – because sometimes the changes could be subtle. The time added up. But mistaking what you remember for the new plate would not be subtle.” Thus, even paperless systems need a post-maintenance function check.

In the meantime, many practical uses remain for those leather chart cases that once marked a professional aviator. One business-aircraft pilot told us he still uses his. “Mine holds my clothes and personal gear,” he said. “I couldn't just chuck out a $300 leather bag – it also carries a lot of memories. It'll be part of my estate, but by then most people won't know what it was – once.”