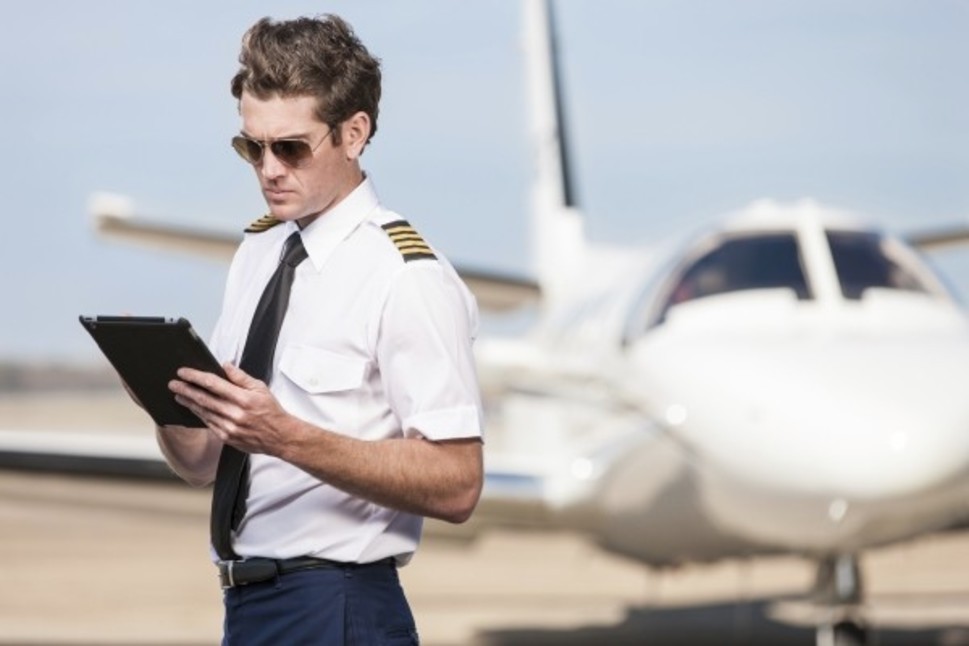 What are the benefits and cautions of using an Electronic Flight Bag? Dave Higdon delves into the world of the cockpit tablet…

Imagine the reaction to a promotion promising a 40-to-50-pound weight loss – from just one tablet, in one day that pays for itself…Absolutely too good to be true, right?

For the population of pilots who formerly hauled chart cases carrying about 40 pounds of necessary documents, however, it’s absolutely true! We refer to the tablet computer, built as, or adapted to the role of an Electronic Flight Bag (EFB).

Of course, we must address the obligatory disclaimers. The side effects of using EFBs may:

On average professional pilots shifting to EFBs from paper shave about 40 pounds from their flying kits. Operators benefit too, through the annual saving in chart fees and from fuel saved on weight no longer being hauled and the duty hours saved each month in update processes.

These are also the benefits of the generic EFB. We don't differentiate here between purpose-made EFBs or those created through the combination of commercial software loaded on an off-the-shelf computer (Class 1, Class 2 or Class 3 hardware loaded with purpose-specific software to give the hardware EFB functionality). They're all Electronic Flight Bags differing primarily by how closely they work with aircraft systems.

Today their money- and time-saving traits are well known, appreciated and adopted by operators of everything from the heaviest iron down to the lightest of the sport aviation segment. As their penetration grows, so their functionality continues to evolve and expand with new capabilities that ease cockpit chores. By the same token the popularity of the devices may expose them to unwelcome issues.

Smartphone, to Tablet, to Cockpit-Installed

The simple EFB long-envisioned by gadget-comfortable pilots came into existence years ago. The earliest users adapted graphics software to off-the-shelf portable computers that could download public-venue graphics files (charts, plates and procedures). Formats varied and their legality was questioned. Some early adopters heard cautions from inspectors asserting that their EFB wasn't legal without also carrying the paper documents those EFBs replaced.

Eventually FAA recognized the advantages before weighing in with policies that legitimized and ultimately popularized the EFB. In 2003 the FAA published Advisory Circular (AC) 120-76A: Guidelines for the Certification, Airworthiness and Operational Approval of Electronic Flight Bag Computing Devices that constituted the first set of guidelines on EFBs established by any civil-aviation authority.  The document also provided a basic definition of an EFB as “an electronic display system intended primarily for cockpit/flight deck or cabin use”.

That AC opened the door to carrying an EFB for charts and plates, manuals and handbooks – anything previously printed on paper and used in the cockpit. While documents remain foundational to EFB use, the EFB's practical applications have expanded. Similarly, the hardware used for EFBs has diversified, with everything from smartphones to notebook computers enlisted in EFB service.

The revolution in EFB software helped drive that diversification, and the FAA has worked to keep up. The current AC 120-76C went into effect May 9, 2014.

More than a Document Display

While some EFBs are aircraft-, avionics- or vendor-specific, the majority are commonly available hardware running off-the-shelf software. The software vendors are plentiful and many are well-known, including Jeppesen (FliteDeck and FliteDeck Pro); Garmin (Pilot); ForeFlight (Mobile); FlyQ (EFB and Pocket); FltPlan (Go), and many others.

On the hardware side, Apple iPads, sundry Android tablets and Microsoft's Surface Pro all find widespread use in aircraft cockpits.

The ‘pick-your-product’ approach makes EFBs themselves as ubiquitous as the chart cases preceding them. But the role of the EFB today goes far beyond simple pulp replacement and document display.

As hardware capabilities and avionics evolved in recent years, operators increasingly looked for ways to integrate new utility into those cockpit tablets using their new tools to leverage Wi-Fi and Bluetooth connections. Today EFB-equipped pilots flight plan anywhere they can use their EFB, tap weather and file with Flight Service or their dispatch office – wirelessly via the EFB's Wi-Fi.

Once in the cockpit these pilots fire up the avionics and upload the flight plan directly into the aircraft's flight management system or stand-alone navigator – again, using a wireless Wi-Fi or Bluetooth connection. Then, when time comes, they can use those wireless capabilities to update their EFB software – in minutes, not hours.

Entering into this area of deeper integration of the EFB beyond a mere document provider may add risk for the systems with which they communicate, however…

One other set of FAA standards apply (first established in AC-120-76A) to the software and can help operators safeguard against willful and unintended information contamination.

Software developers, avionics makers and airplane OEMs continue to seek ways to better streamline the management of aircraft use and maintenance records, crew logs and dispatch communications. Increasingly engine monitoring and management systems can upload data to crew EFBs, for example, for subsequent transfer to the maintenance foreman's system and the engine OEM’s monitoring service.

Yet, each electronic connection presents an opportunity for an attempt to hack the company computers or the crew EFB. Thus security becomes a top priority…

Steps designed to protect these systems from unauthorized connections need to work at both ends; both on the flight-crew EFB and the computer hosting the data being transferred, regardless of the direction of data flow. For pilots flying Class 1 and Class 2 EFB equipment using a hardwire connection in an office or home can obviate a breach using the wireless connections – whether Bluetooth or Wi-Fi.

Although not as common as a few years ago, so-called “Sneaker Net” software updates secure methods of updating software. Download data to a Secure Digital (SD) card via a hardwired home or office computer, then walk out to the aircraft and upload the new data into the cockpit avionics or EFB hardware.

For aircraft equipped with In-Flight Internet access, updates can happen anywhere – though bandwidth and security protocols may make it smarter and faster to update EFB software when on the ground.

After an update, boot up the device, check functionality, remove and erase the SD card and stow it for the next update.

Information Technology staff we consulted all advise users to regularly change the passwords or key codes needed to authorize the connection between an EFB and any other system in the aviation loop. That means updating passwords after every update – typically on a 28-day cycle, 13 times annually – or anytime operating and connections software are updated.

Daily scans of systems with anti-virus, anti-spyware, anti-hacking software is another must-do the IT experts advise. Configuring your EFB to connect only with systems previously approved can help preclude problems (such as the Captain using his EFB to read email from the unsecured connection of a coffee shop or FBO pilot lounge).

“When you don't need it, turn off the Wi-Fi, shut down the Bluetooth on your EFB and close the door on some of the problem potential,” a mobile-systems IT programmer told us. “It's a little like making sure you lock your home before leaving for the airport. That killer home-security system is rather less helpful if you leave the door open and don't set the alarm.”

That kind of security breach would be a particularly bitter tablet to swallow!