How military and gaming tech are changing cockpit situational awareness 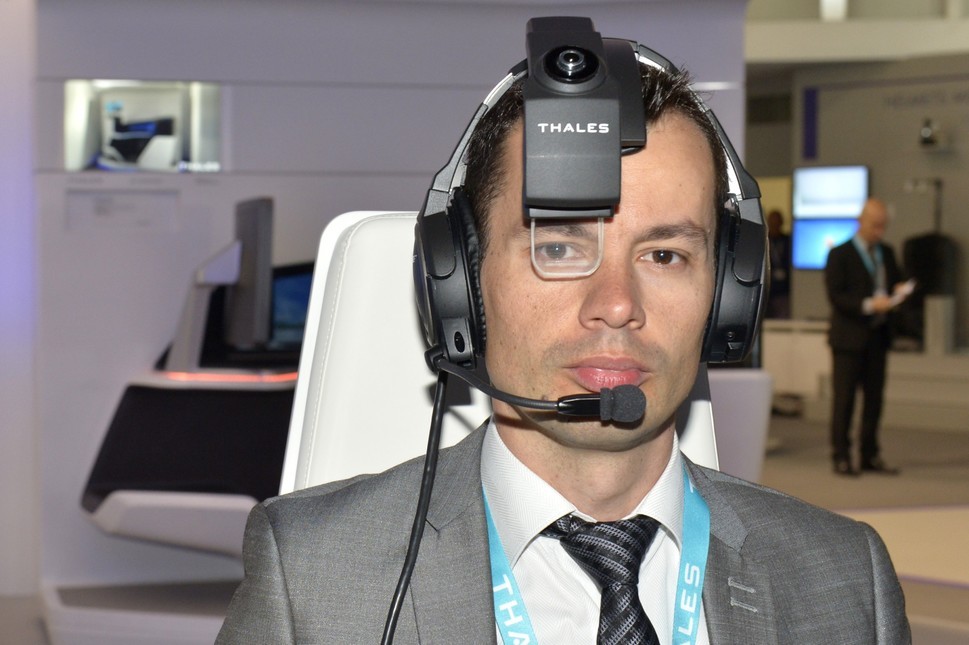 A technology borne of military and computer-gaming worlds is on a heading to intercept business aircraft cockpits. If they catch on, pilots stand to gain a new tool to help them maintain situational awareness at a higher level. Dave Higdon investigates…

The Helmet-Mounted Display (HMD) marries the modern aviation headset with the visual assets of a head-up display system, but instead of the display information appearing only on that collator screen above the glare shield, it moves with you so critical information remains in your field of view at all times.

The technology gurus would call HMD an augmented reality device in which virtual-reality images are overlaid onto the back of a see-through lens or face shield. The virtual information is what the HMD would carry, with the addition of enhanced-vision and synthetic-vision graphics that accurately reflect the world where the pilot is looking. It’s all very slick, and it’s already in use by military pilots, trainees, gamers and simulation fans.

Those who have sampled them in their various environments – including aviation – concede that the visual package takes a period of adjustment. For some, the combination of almost transparent images over actual eyeball views (and in some cases the addition of technologically-enhanced images) proves too much. But for the rest of the piloting population, the advancement could be a step toward an immersed 360-degree spherical view of the world around the aircraft that misses nothing the sensors detect.

Scorpion: a helmet-mounted display (HMD) system that projects primary flight display (PFD) information and other mission-focused graphics inside the helmet visor. Originally it was invented by helmet-maker Gentex; however, the company sold its HMD line to Thales about three years ago. Thales has since been busy adapting the Scorpion’s technology into something more civil, and has announced the TopMax and TopEagle HMDs.

Scorpion wasn't the first HMD to see military service; its immediate predecessor still serves as the US Air Force's Joint Helmet-Mounted Cueing System. Technologically, the two systems – the JHMCS and Scorpion – could hardly be more different, though.

It's in those differences that the US Air Force started testing Scorpion in its most-advanced fighter, the F22 Raptor as it appears the JHMCS is too large for the F22's narrow canopy width. It's from Scorpion’s different approach that the TopEagle and TopMax emerged.

TopMax builds on Scorpion’s display and tracker system, but consolidates it into a single assembly integrated with a standard commercial headset. The TopMax offers a monocle display, covering only one eye and came from Thales’ advanced cockpit concept for commercial aircraft program.

The company says it has particular potential for corporate jet cockpits where space constraints work against installing a conventional HUD system.

TopEagle, meanwhile, takes a slightly different approach. It’s a simplified version of Scorpion targeted at civil helicopters (especially coast guard missions, emergency medical services and law enforcement work). Beyond displaying the basic flight information of a PFD, the TopEagle HMD also displays powerplant information and provides navigation guidance, allowing the pilot to keep eyes out of the cockpit in even the worst conditions.

Unveiled in June at the Paris Salon, both TopEagle and TopMax could be certificated by the middle of next year, Thales says. Then it will be up to owners and OEMs to make the marriage work, due to the technology required to sync the HMD to where the pilot looks.

Since Thales' GA-targeted HMD evolved out of the Scorpion system under evaluation by the military, it's worth looking at its basics, as explained by Thales:

The Scorpion Helmet-Mounted Cueing System (HMCS) delivers full-color, dynamic flight and mission data projected directly and safely into the pilot's line of sight via a large field-of-view, fully transparent, rugged, optical waveguide display assembly. Unlike other HMD solutions, Scorpion attaches to the pilot's headset – rather than being integrated into a specific piece of headgear.

Although TopMax is smaller, it provides enough display space to allow the user to maintain a head-up, eyes-out scan that's aimed to enhance real-time situational awareness by simply putting on a headset with TopMax attached and calibrated. The added dimension of full-color symbology, as we see on cockpit displays, and video imagery dramatically increases the user’s ability to rapidly interpret and correlate the situation while reducing task saturation and increasing efficiency.

Already operational on US Air Force A-10, F-16, and AC-130W aircraft, Thales' Scorpion won a chance for evaluation in the F-22 because it references differently than the JHMCS, and takes up less space.

The mobility of the Scorpion HMD system underpins Thales' approach with its TopMax system. The HMD hardware attaches to a standard pilot headset and, once calibrated for the specific cockpit environment, can be left in the aircraft for other flight crew members to use attached to their personal aviation headset.

Both TopEagle and TopMax employ a thin, flat optical waveguide combiner in place of visor projection or the bulk of a prism. This approach makes them compatible with standard night-vision goggles - a particularly helpful element for helicopter emergency medical service pilots. They also employ a hybrid inertial-optical head tracking system, allowing Thales to avoid any electronics attached to the aircraft.

To provide the all-important referencing function Thales installed a camera on the system that tracks reflective, coded stickers attached inside the cockpit.

According to the company, calibration and recalibration take a mere 20 minutes, further reducing the non-recurring cost of integrating the system into different aircraft. That makes the mechanical aspects relatively easy, since TopMax requires no specific integration with aircraft systems – save for power.

It's not difficult to imagine the reaction of some pilots to the idea of wearing a device suspended over the eyes from the top band of an aviation headset. “Over the eyes?” some will ask...”Are you joking?”

Some of the same doubts arose when the first head-up guidance systems arrived on airliner flight decks – which followed similar doubts raised when HUDs first landed in military cockpits. Decades later the utility of these systems won users over, thanks to the adaptability of the pilots using these systems.

Unlike some developmental over-one-eye systems this pilot sampled years ago, the transparent nature of the over-the-eye display units eliminates what was a spatially disorienting experience in those earlier, developmental systems. With those experimental packages, the view seen by the eye using the non-transparent display never changed – except in reaction to the air-data and attitude sensors feeding what amounted to an over-the-eye PFD. Frankly, it was not fun, not comforting, and not helpful.

But the translucent display onto which flight and other data appear in this latest HMD works more like a conventional HUD – but one just ahead of your eye – which can still see the world view through the screen. Add properly referenced SVS and/or EVS to the display and the user will always have a real-time view of the world where he or she is looking.

Married to PFD data, pilots could find themselves embracing yet another advance in technology that helps them see their mission through – safely and visibly, in all conditions. And that's a situation many of us would willingly embrace!