An introduction and overview of aircraft connectivity - both inside and out... 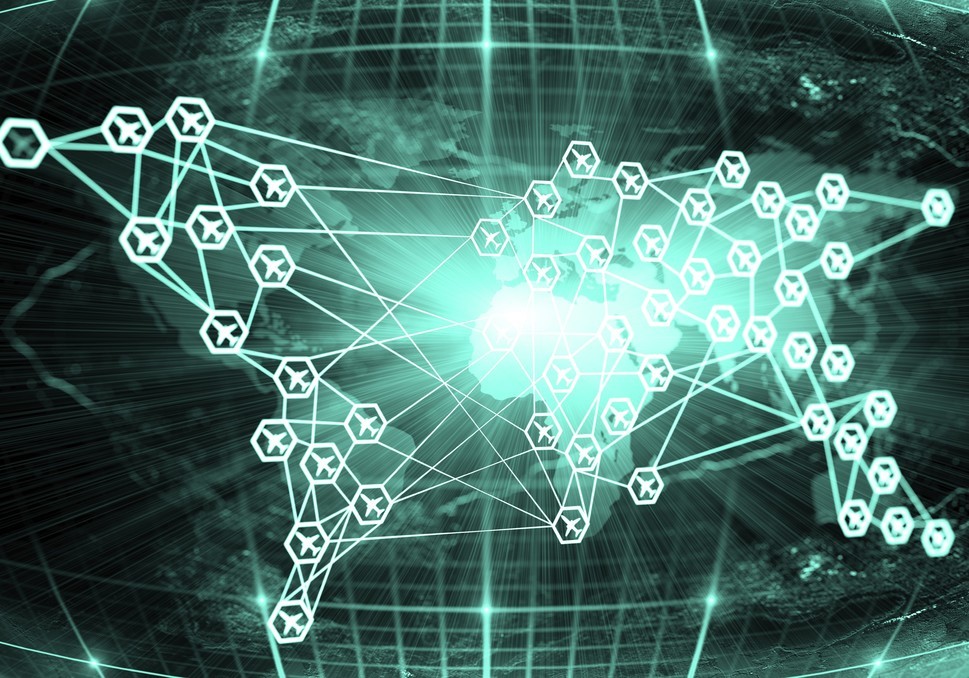 Helping you understand the technology, integration and advances of aircraft avionics and equipage, Ken Elliott begins a five-part series on aircraft connectivity, starting with an introduction and overview of this vast subject.

For the last several years, designers, developers, providers and integrators have each contributed enormously to a revolution in aircraft connectivity, both internal to the fuselage and externally to destinations throughout the world. We are:

Over the next five articles, AvBuyer will review how we accomplish these marvels of our time, addressing both Networks and Providers, and the services they offer. We will cover equipment, integration and options available to business aircraft operators. Above all, we’ll attempt to demonstrate the wider aircraft connectivity of today and tomorrow, enabling operators to see the benefits of integrated systems and make wise economic choices for their investments going forward.

An aircraft connects externally to the outside world and internally to its onboard systems. The complexity of this connectivity is so vast that Figure 1 can only represent a simplistic overview. This overall series, however, will mirror this functional block representation and the sub-sections of this introduction will do the same.

Ground-based facilities are adequate for most external connectivity, providing an aircraft is well within range, and the technology bandwidth and frequency are appropriate for the task. More significantly satellite networks have evolved to replace the old High Frequency (HF) services, filling in the oceanic and polar airspaces. They also supplant some of the ground VHF-based services and are on the way to doing more.

Aviation today is very dependent on satellites that provide voice, text, data, internet and video services to fleets of aircraft or single operators via Service Providers.

Inmarsat offers operator, passenger and safety services via its legacy Aero, Swift 64 and Broadband programs. During 2015, it commenced Ka Band platform coverage with the launch of a new range of satellites, and in partnership with Cisco, for gateway applications, offering 50Mb per second.

Ka band, branded as Global Express (Aviation), uses Inmarsat I-5 supplied satellites, of which there will be three, while L band is available from three earlier generation I-4 satellites, offering 3G service, and five legacy I-3 satellites also providing L band service.

Iridium also offers operator, passenger and safety services from its 66 low earth orbit (LEO) satellites. It enables broadband services for laptops and tablets. In 2016, as new satellites come on line, Iridium will begin to offer faster broadband with speeds of 1.4Mb per second. Both satellite networks offer smartphone capability, including optimized applications that may be used on board the business aircraft.

A third network, ViaSat, offers Business Aviation in-flight Ka and Ku band internet. Services include video teleconferencing and this year speeds will double and coverage will increase up to seven times using a new second satellite. ViaSat has made significant inroads into Business Aviation, where existing aircraft OEM standardized platforms are not the only option. Their recent collaboration with Jet Aviation, on a 2016 Global Express program, is an example of this development.

Very High Frequency (VHF) sits further along in the frequency spectrum than its longer range companion, HF. It is, primarily, a continental land-based communication system. VHF, as line-of-sight communication, has limited range. It uses a carrier modulated at much lower frequency rates with voice or data.

Still using VHF, but as a short-range capability, data services are also provided in different regions throughout the world. VDL Mode 2 (VDLM2), used for digital datalink, is 10 times faster than traditional VHF analogue datalink (VDL Mode 0). Traditional aircraft equipment can be replaced or upgraded to include VDLM2 capability.

VDLM2 supports the Controller Pilot DataLink Communications (CPDLC) requirement of Data Comm and is required for European and ICAO mandates. For the US, initial applications of datalink use both VDLM2 and allow continued use of VDL Mode 0. These form part of the overall adoption of FANS 1/A, extending to include North Atlantic Tracks System (NATS) that eventually will evolve into a wider data capability under the banner of ATN-B2.

At a lower frequency and using repeater ground stations, polar coverage of data can still be served by High Frequency Data Link (HFDL). Although Iridium satellite polar coverage (part of FANS over Iridium – FOI) is now available, HFDL remains an integral capability in the FANS 1/A toolkit.

Data shared between users includes operational, weather and engine reporting. Clearances, runway conditions and text messages are part of ATC data that will increase under NextGen/SES2+/ICAO Block programs as they move away from voice methods of communication.

While satellite networks and ground facilities provide the link between users, service providers offer the method to use those links. Providers support multiple applications and aggressively compete for the business (see Figure 2). 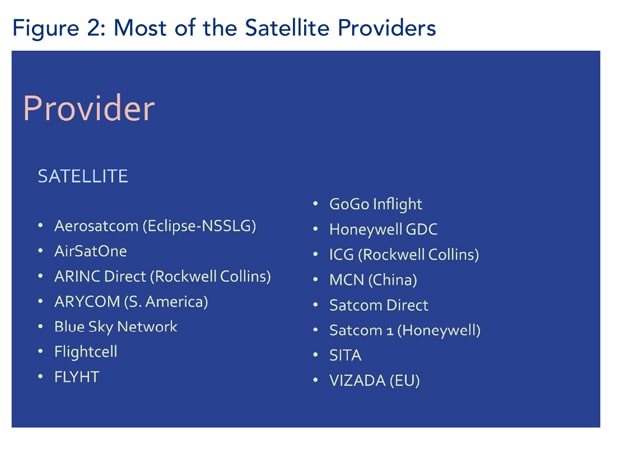 These service providers and others that specialize at a sub-tier level, offer a potpourri of satellite- and ground-based tools for pilots and operators. Most services involving the use of data can be grouped into two primary categories. One is trip plan and the other flight data, and these include aircraft performance and flight tracking.

Figures 3 and 4 provide comprehensive but not complete groupings of these sub-tier providers. Bear in mind that all service providers have multiple capabilities. It would therefore be prudent to contact each directly, including researching their websites. Lists in this article show where service providers tend to focus their resources. 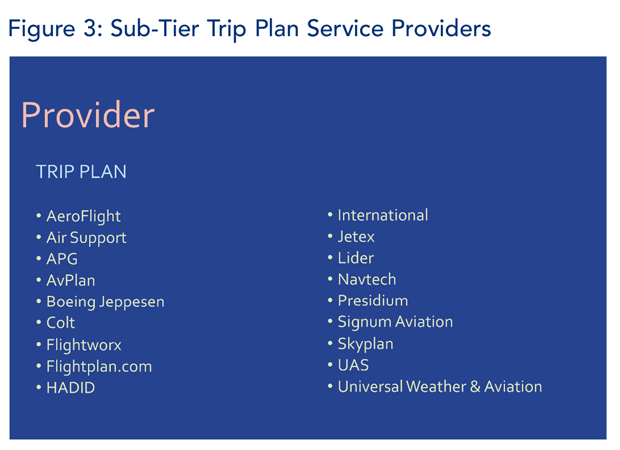 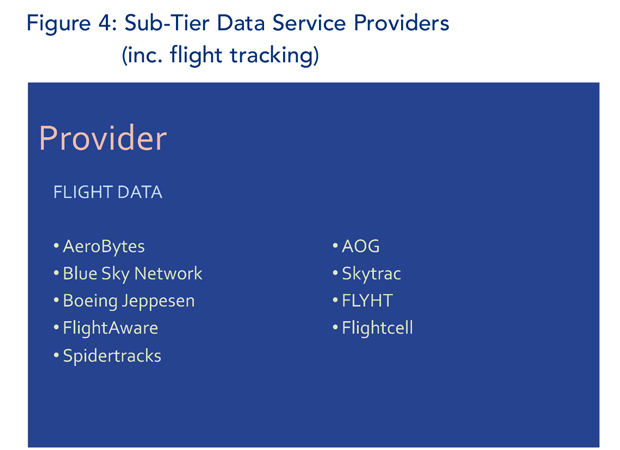 Within each data grouping are the types of services being offered. Figures 5 and 6 begin with services provided from satellite and ground facility providers. 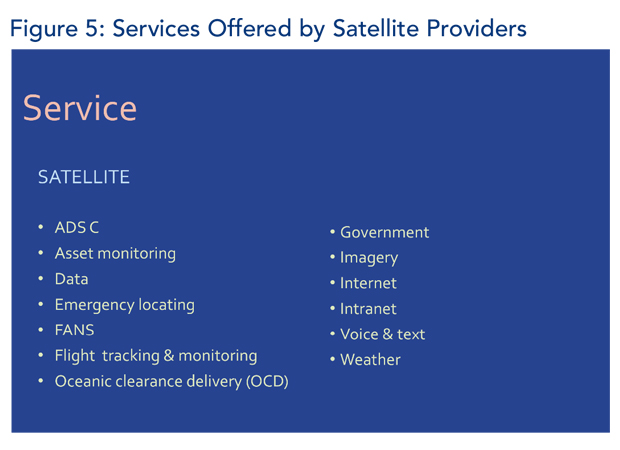 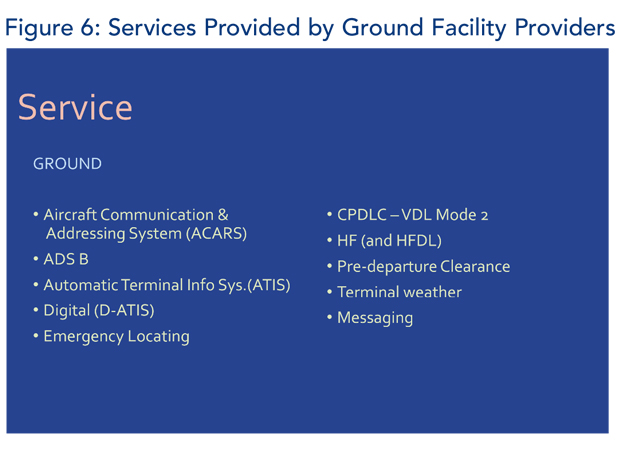 Figures 7 and 8 represent the specialized operation services from sub-tier service providers. These tools can be tabled under two major groups, trip planning and flight data. 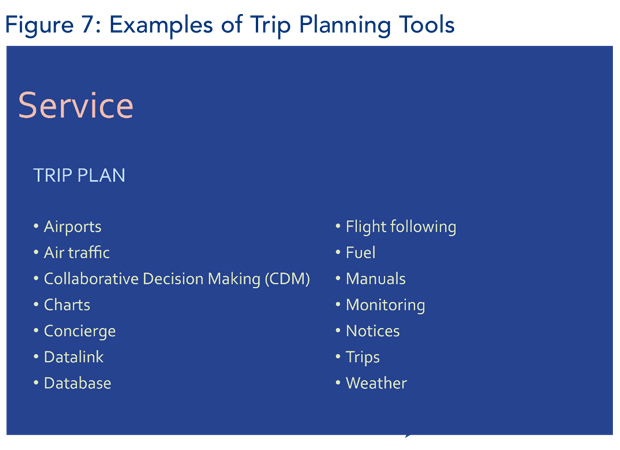 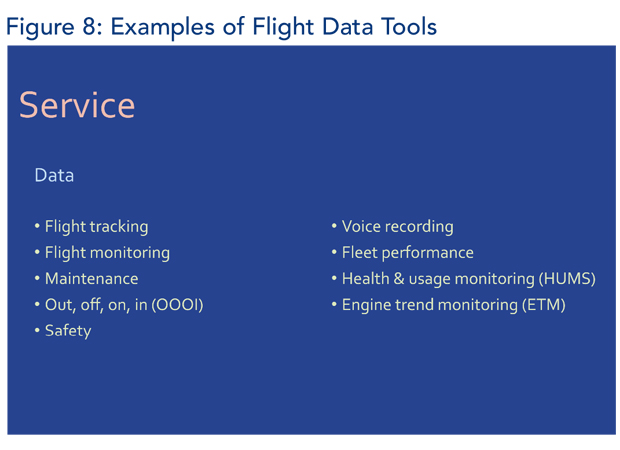 It is worth mentioning that included in the services provided are several additional tools. These are acceleration and filtering of data, mobile applications, medical aids and member services such as NBAA Air Traffic Services (NBAA ATS).

Connecting Onboard with External Transfer Platforms

Think of external transfer platforms as the means of moving internal voice and digital data to satellite networks and ground facilities, via service providers. Also these platforms receive and process data from outside. These platforms are on-board aircraft equipment transforming and transferring external and internal derived electronic information, in and out of the aircraft. 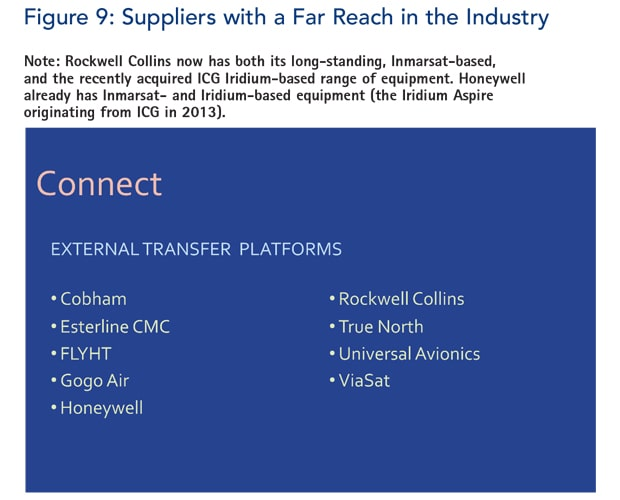 Connecting Internally via Onboard Platforms

External transfer platforms process and pass on voice, video and data to onboard cabin system platforms having topical brand names such as Smart Link, Venue and Ovation Select. 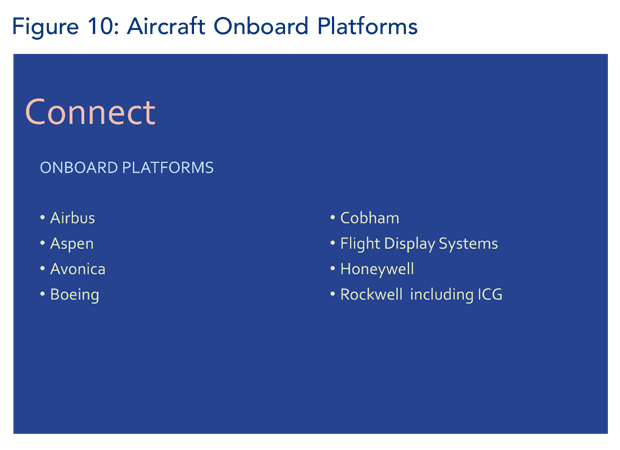 Connecting Internally with Onboard Services

From video to text messages, passenger address to lighting control, aircraft onboard services are as broad in their ability to control anything in the cabin as they are complex. Subsequent articles in this series will address these and other topics in much greater detail, informing readers of capabilities and choices available to operators.

Fully integrated platforms provide many services throughout both the cockpit and the cabin. Figures 10 and 11 offer just some of the platforms and associated services.

One such internal service on Figure 11 – ‘Provider Services’ – offers a wealth of information to both the cabin and the cockpit, including weather, moving maps, flight plans and company message transfer. 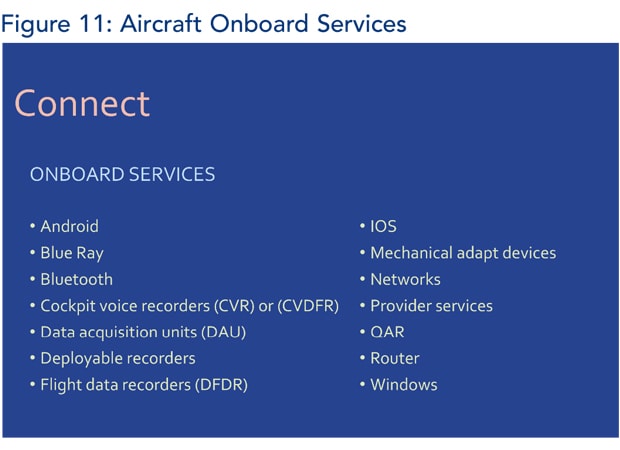 Think of these onboard platforms as a means of transposing physical things into digital things. Later these digital things are transformed into terabytes of data sent onward, via external transfer platforms, over superhighways forming an oceanic-capable internet. 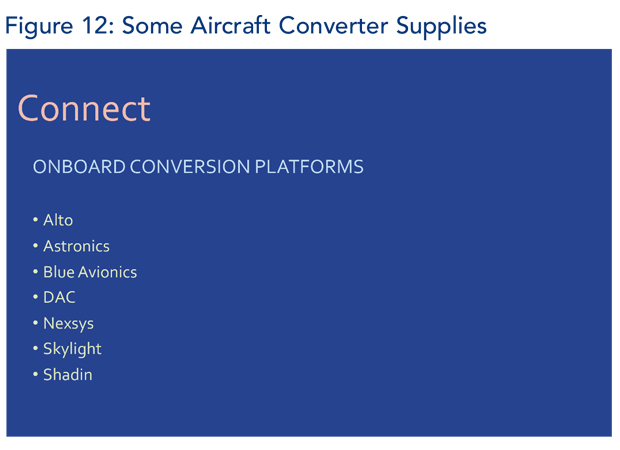 Deep within an aircraft are sensors and converters that provide masses of data to both onboard and external transfer platforms. Most sensors are an integral part of the aircraft build, unless part of an aftermarket modification. On the other hand, many converters are added to facilitate the conversion of one kind of data to another. Examples include analogue-to-digital conversions and router-to-Wi-Fi connections, used when complex cockpit or cabin systems are added.

Aircraft manufacturers with the luxury of designing fully integrated avionics from scratch, can largely avoid conversion of signals and data. So expect to see conversion more in aftermarket solutions. Note that proposals from MROs focusing on aftermarket upgrades will often include conversion equipment, so do not be surprised when it appears on bids and proposals.

A common and emerging need for both sensors and converters is to enable the transfer of aircraft performance data to on-board tablets and devices or to external transfer systems for sending real-time data to the ground. 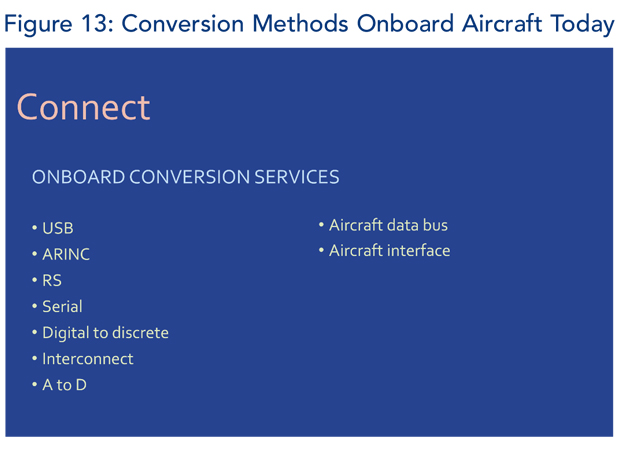 Specifically, displaying of data and video onboard aircraft has become something of a separate area of connectivity. We listen to voice either in real time or animated, but the reliance on sound is becoming less for flight crews. With broadband, display methods are critical to passengers.

Data as imagery, and data as visual script, are presented to flight crews on primary and multifunction flight displays, back up displays, FMS control display units, electronic flight bags, tablets and so many other forms of image presentation, such as HUDs with EVS.

Data as imagery, visual script and video are presented to passengers on seat controls, seat monitors, group monitors and via cabin Wi-Fi on tablets, smart phones and other devices. There is even now the product that covers sidewalls and bulkheads, thereby allowing full size display of images for the benefit (or possibly dread) of passengers.

It’s worth noting that many displays are hosted and branded by big name avionics manufacturers, forming subparts of complex systems, but the displays themselves are often made by other specialized suppliers, such as Barco.

As aviation integrates into the Internet of Things (IoT) with its vast future ‘data lakes’, the road ahead offers endless possibilities, restricted only by the availability of storage and transfer technology, and the security of data, protected from both intentional and unintended consequences.

In 2016, Bombardier launches its new Inmarsat-based WAVE (Wireless Access Virtually Everywhere). With such smart branding alone, the smell of future possibilities already permeates the airspace in which we fly.