What are your Bizjet Cockpit Upgrade Priorities?

Typically, the greater the routine business jet maintenance, the more time will be available to accomplish a cockpit upgrade. While this may seem obvious, it is not a simple process to figure out. Ken Elliott shares his expertise… 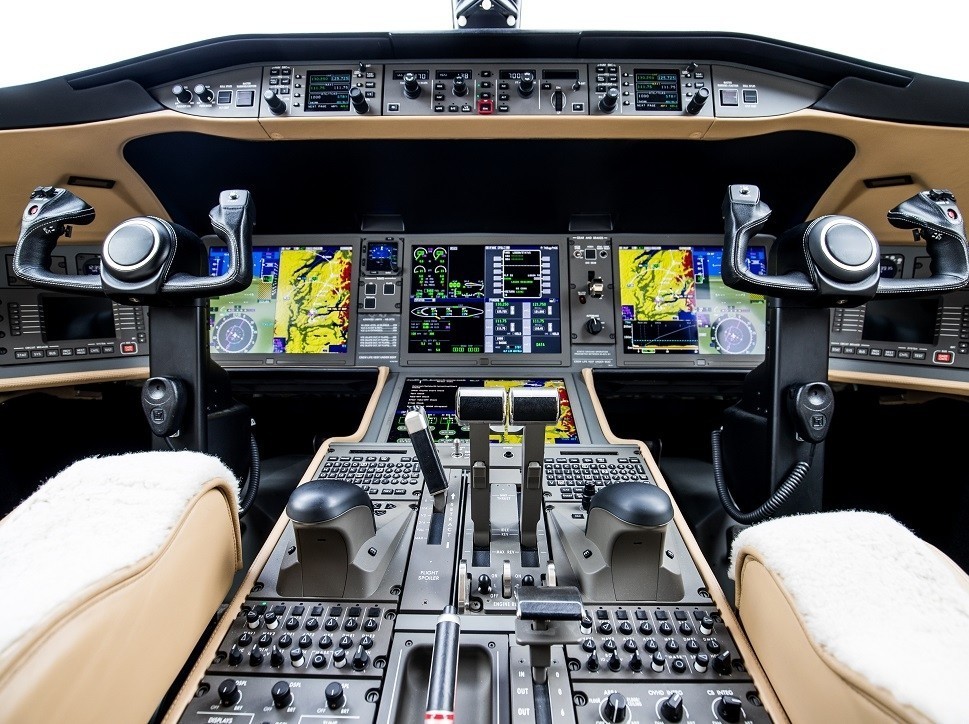 Over the following paragraphs, we will consider the optimum ways to proceed with a cockpit upgrade, mixing routine and non-routine work at the same time.

When it comes to aviation, there is both scheduled and unscheduled maintenance. One has distinct predictability and the other does not. The more unscheduled work is added to routine scheduled tasking, the harder it becomes to ensure an ‘on-time delivery’.

Routine work is mostly inspection-related, and is broken out as ‘due items’. The due items emerge out of maintenance tracking, typically via a Maintenance Management Program (MMP), providing owners and operators with fixed recommended time windows to address action items as they become due.

Routine inspections and overhauls are based on hours flown or cycles of operation (Times and Cycles), thus ensuring relative predictability.

On the other hand, non-routine work is mostly unscheduled, and may require immediate attention. When flight departments plan their schedules, they plan around relative predictability and rarely make room to squeeze in additional repairs or modifications such as an avionics upgrade.

It is for this reason that most upgrades will need to be accomplished along with a major inspection (a C-check, for example), where complex parallel effort can then occur. In contrast, trying to add any aircraft upgrade to a relatively minor annual or 100-hour inspection is risky for many reasons.

In general, upgrades can apply to several aircraft ‘zones’, with the cockpit being one of them. Others are the cabin, airframe, wings (winglets), engines, APU and accessories.

It helps to first know the priority that needs to be placed on an upgrade, by knowing the type of requirement, or the purpose behind the effort. Table A lists four drivers of an upgrade requirement.

There is a subtle difference between a mandated and an operational requirement. For example, an Emergency Locator Transmitter (ELT) is a mostly universal requirement, while you only need FANS 1/A+ to operate across oceanic and remote tracks. So, while most internationally-flown aircraft did schedule for an ELT installation, domestically-operated aircraft typically took a pass on FANS equipage.

Obsolescence is a tricky requirement for operators to follow because manufacturers tend to be reluctant to admit when they are struggling to support legacy products.

Despite that, look out for Service Letters and notices from both the systems and aircraft manufacturers. It is not uncommon to have notification about service difficulties years in advance. Many operators will then hold off or look for alternative support solutions. There have been cases where it is more efficient to replace complete systems with a differently-branded third party product.

Table B outlines the most popular cockpit upgrades. You should assume these may apply to many different corporate aircraft; will differ in actual equipage; and could include wiring, equipment, antennas and other accessory items, placed external to the cockpit. 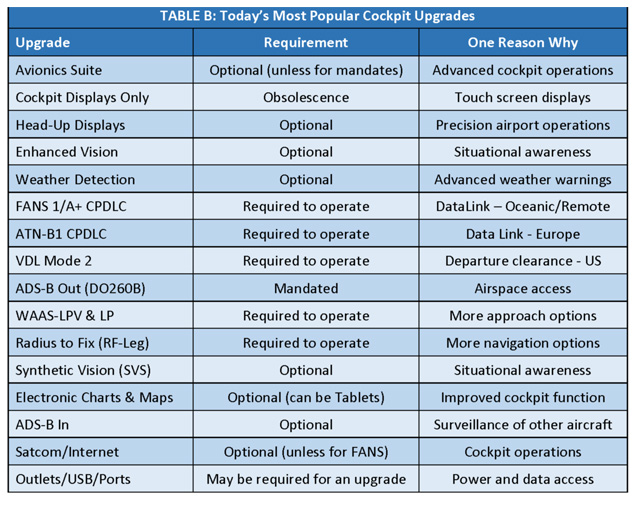 Along with the upgrade, Table B lists the requirement type and one reason to proceed. In some cases, there are several reasons you would want to consider an upgrade. For some aircraft, an upgrade may be specifically necessary, where for others it may not be.

Also keep in mind some aircraft are already provisioned for upgrades, while others need additional equipment, such as antennas.

Understand that every model of aircraft is different, and while you may spot the same manufacturer’s avionics suite in several different models of aircraft, they will each have their own unique branded product (including by part number and version of software).

Business aircraft manufacturers follow official guidance for continued airworthiness. Referencing that, they proceed to create their own inspection programs, based on the age, airframe flight hours, and cycles of engine and other major components, such as landing gear.

In general, the inspections conducted at Maintenance Repair and Overhaul (MRO) shops, are large enough for owners to consider other tasks. Mostly, these will be non-routine or unscheduled.

Table C outlines some of the unscheduled tasks undertaken on business aircraft, on an ‘on-condition’,or event basis. 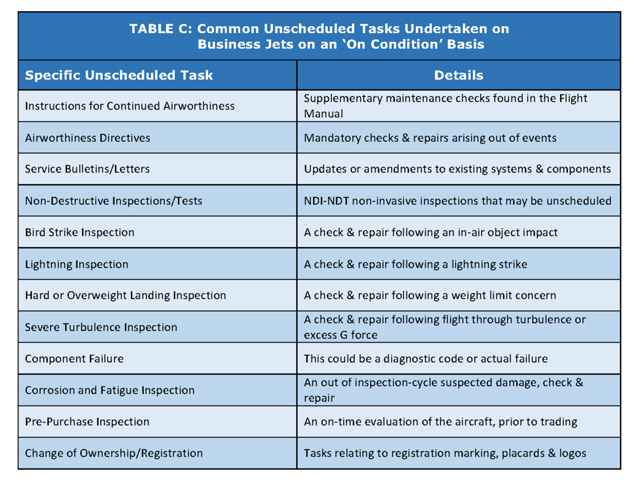 Many of these unscheduled tasks cannot be forecast and, in some cases, parts availability, scheduling, and other factors can result in extended, unplanned downtime.

Because of that it is always a good idea to have additional modification work, such as a cockpit upgrade, at least partially mapped out in advance.

For instance, imagine if an aircraft is scheduled for a major inspection in the fourth quarter, but unexpectedly a major incident (bird or lightning strike) with resulting damage occurs in the first quarter.

If the original plan was to include a significant cockpit upgrade during the later visit, and if there is partial planning in place, it is possible for some of the upgrade to be accomplished during the unplanned downtime.

This would be helpful where the modification downtime is similar to, or less than, that required for the unscheduled repairs.

It is not so much the inspections as the repairs that determine the downtime for unplanned MRO visits. In fact, many unscheduled inspections can be completed by Mobile Repair Teams (MRTs), at the owner’s/operator’s hangar. This will be followed by a ferry flight to the MRO for anything major to be accomplished.

Equally, it is possible to include postponed repair work during a major inspection. For example, if the aircraft’s Minimum Equipment List (MEL/MMEL) permits, the aircraft can fly with certain systems disabled until the next inspection.

In this instance, a cockpit upgrade is considered a non-routine activity, even though it may have been scheduled in advance. This is an important distinction to make because routine activity has assigned man-hours and downtime, pre-determined and identified on individual work or task cards.

Those same cards do not exist for upgrades. There is one exception, in the instance of factory Service Bulletins and aircraft service changes that are issued for upgrading cockpit systems.

Typically, the Original Equipment Manufacturer (OEM) of a system (i.e. Collins Aerospace, Honeywell Aerospace, Garmin or Universal Avionics Systems), will introduce an avionics suite, including cockpit displays and controls as an initial version for a new type of aircraft, or post modification. 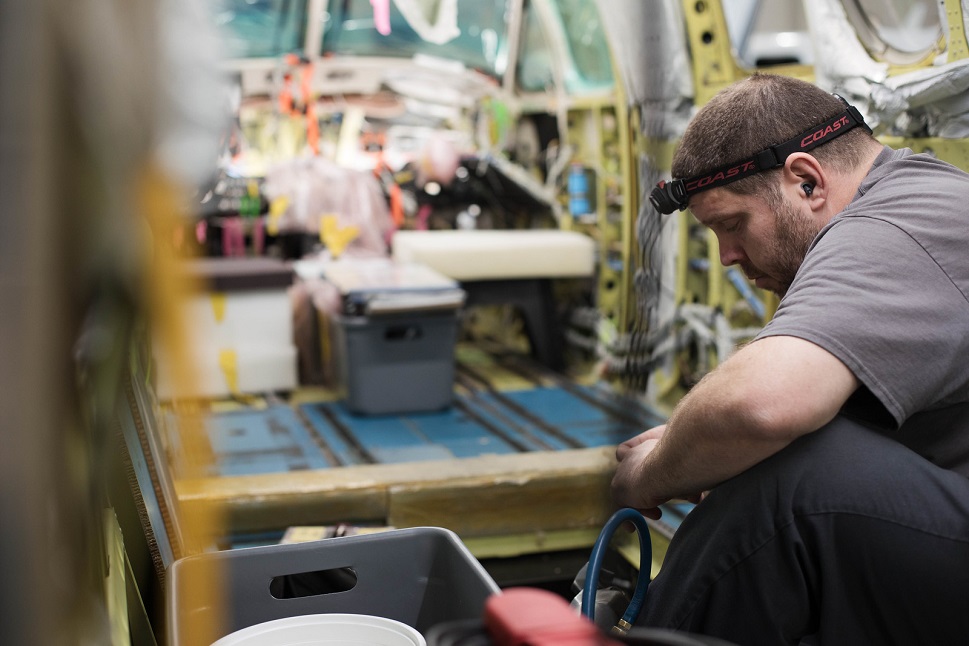 In cooperation with the aircraft OEM, the avionics supplier will later issue major changes, improvements and advancements, through an aircraft OEM’s branded program. These may be addressed via the factory bulletin process, but are substantially a cockpit upgrade.

Another important element of cockpit modifications is how integrated the modern cockpit can be. Think of advanced avionics being modular and proprietary. This is crucial to the overall consolidation of work tasks because further integration becomes less of a hurdle for factory-authorized upgrades.

It is, on the other hand, more restrictive to third-party alteration.

Eventually, when open architecture migrates into cockpit avionics, it will be to the relief of owners and third-party MROs alike, enabling more competition and choice.

A simple rule of thumb for an indication of the complexity to be expected for a major cockpit upgrade is to see how many instruments and displays are situated in the cockpit panel.

If you poke your head into an unmodified Dassault Falcon 50 and then look in a Falcon 7X cockpit, the difference will be obvious. You may also conclude that the expected routine and non-routine maintenance on the Falcon 50 will be greater than on the Falcon 7X, aligning the increase in routine man-hours and downtime with the additional effort required for a major cockpit upgrade.

A good example of a complex variant is the recently mandated cockpit upgrade of ADS-B Out. For many newer aircraft (where some were provisioned), the work involved a minor service bulletin, software and/or hardware upgrades.

For many legacy aircraft, special Supplemental Type Certificates (eased by Approved Model Lists – AMLs) were required. This, in turn, dictated aircraft interiors to be accessed, wiring to be routed, and antennas and equipment to be added.

Every industry has been impacted by Covid-19 and the planet-wide chip shortage. There has rarely been a similar period where delivery of parts, products, and services has been so unpredictable and subject to delays.

Before scheduling anything, check availability of the product. Try to rely on availability dates that fall ahead of aircraft input at the MRO shop, as opposed to guaranteed delivery prior to the aircraft ‘out’ date.

Add cushion days to any work scope, especially unscheduled or non-routine tasks. That includes previously quoted downtimes for a cockpit upgrade. As a rule of thumb, treat the ‘task-time’ relationship, between routine inspection and repair work, and all non-routine effort, as an exponential impact.

To understand impact, as the number of separately quoted items in a cockpit upgrade increases, there will need to be additional effort. This includes greater access, time spent on wire routing, and personnel, working in the same space at the same time.

Try to picture your aircraft in a hangar for a 30-day major inspection, without other work underway. Then envisage a similar situation with the addition of sheet metal mechanics and wiring technicians scrambling to complete a cockpit upgrade at the same time.

Furthermore, consider the additional impact of an interior re-rag or replacement, along with new external paint, or the addition of winglets. These are huge buckets of time with tasks to juggle within a fixed downtime window. Plan everything carefully, using creative planning tools such as Gantt charts.

Bundling activities can save on overall downtime (where each task is treated independently), but you do not want to overdo it. Attempting downtime consolidation for several non-routine operations can quickly stretch to overtake the sum of several MRO trips, to accomplish the same work-scope.

An approved quote for a cockpit upgrade should include man hours and downtime. However, standard quotes are often adapted from templates that do not consider the impact of combining the quoted upgrade with other major tasks. The man hours may stay the same, but the downtime will extend.

This occurs because you can only accomplish some tasks when you have access, or when the aircraft can be powered, taken off jacks, moved out of the paint shop, and so on. In practice, both man hours and downtime will increase, because the dynamics of the overall shop visit will differ, as you parallel and combine effort, within a condensed period. 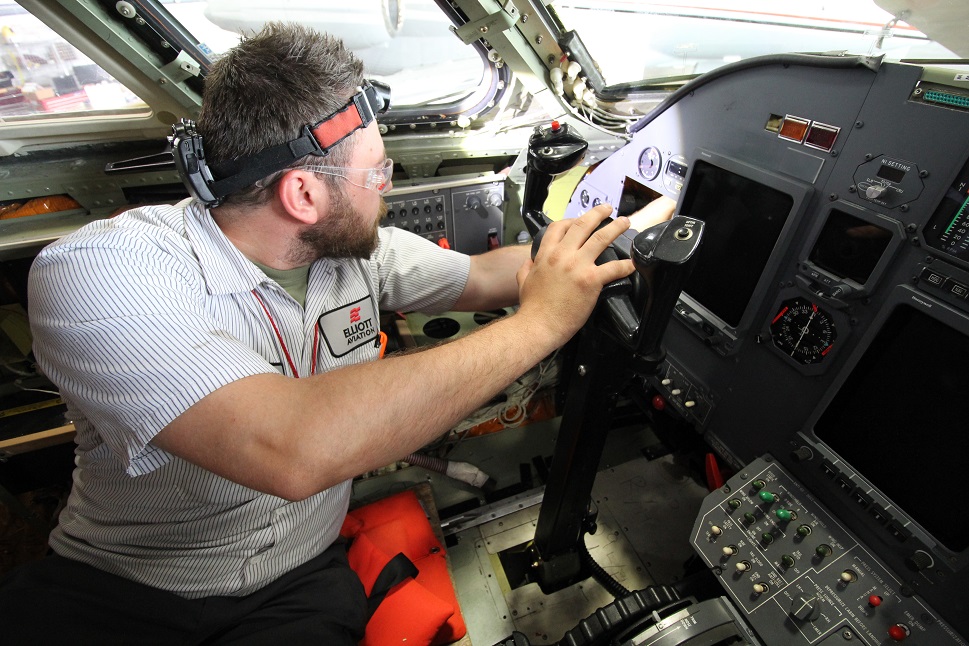 Because cockpit upgrades are often combined with routine inspections, their quoted hours may fall short of what they turn out to be.

This is a result of combining different trades in the same tight spaces, during the same downtime. Product delivery is crucial to coordinating shop visits. So is the scheduling of any off-site effort. The decision for selecting and completing each of the available cockpit upgrades during routine maintenance is based on its complexity, requirement, and product availability. If downtime is limited, look at provisioning, as opposed to full implementation.

When planning for, and scheduling, a routine major inspection consider all the options open to you. Take the time to evaluate the sensibility of simultaneously upgrading the interior, paint, avionics, engines, winglets and more.

After all, this could be a one-time opportunity to execute an efficient aircraft maintenance and upgrade event, where both you and the MRO shop may benefit. 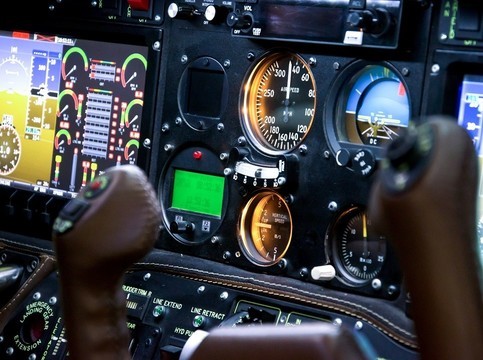 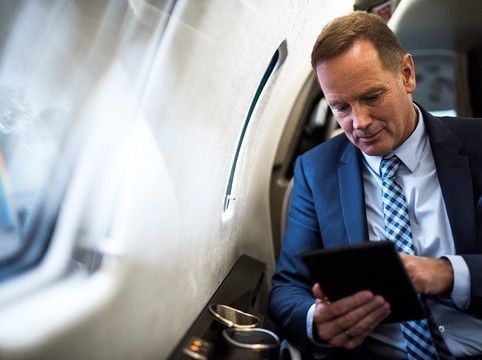 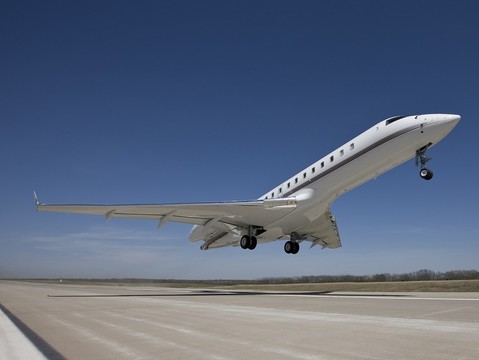 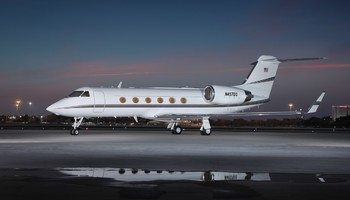 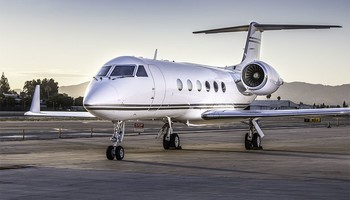 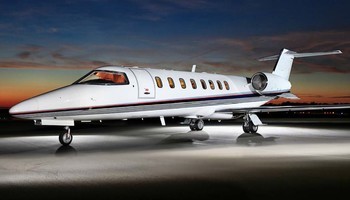