What makes Synthetic Vision Systems so popular in today’s Business Aviation cockpits and how can pilots benefit from this equipment? Dave Higdon explores the world of SVS... 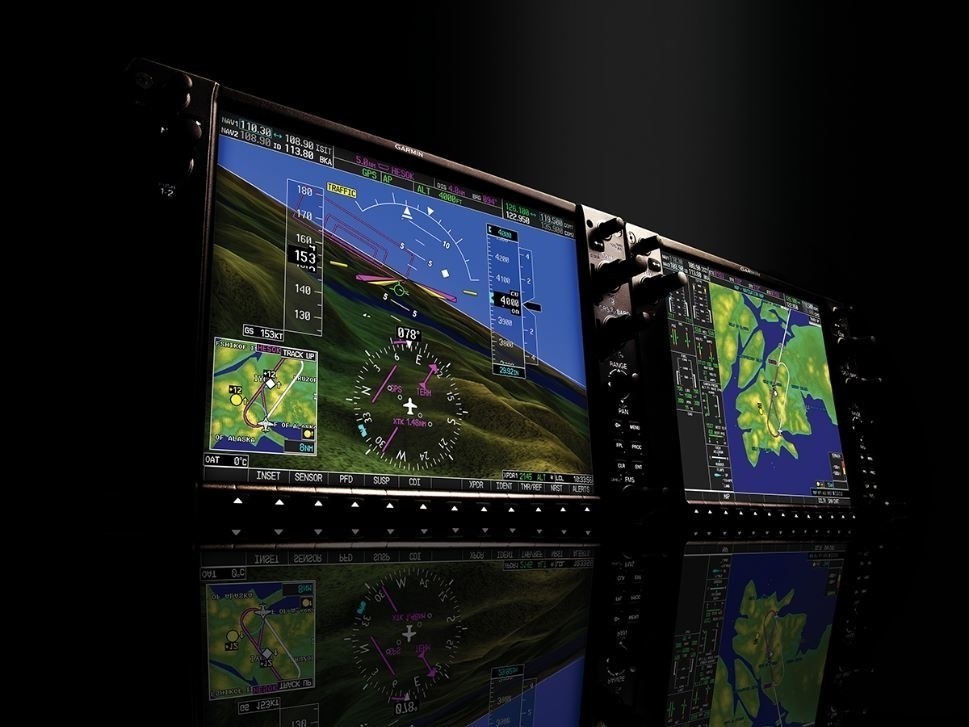 What makes Synthetic Vision Systems so popular in today’s business aircraft cockpits? Dave Higdon discusses how pilots can benefit from this safety-enhancing equipment.

Consider for a moment the satellites responsible for tirelessly scanning the Earth's surface with ever-increasing detail. From those scans come today's increasingly accurate landscape data that software engineers convert into graphic images. And those graphics today provide pilots with a near-photographic tool of dynamic three-dimensional images called ‘Synthetic Vision’.

Synthetic Vision Systems (SVS) enhance situational awareness for pilots by showing everything present in the scan, whether terrain, buildings, highways or obstacles.

It enhances flight safety by combining an advanced database of topographical maps, presented as a moving image synced with GPS position to give the pilot a clear, uncluttered visualization of his or her surrounds, and sometimes simultaneously rendering a simulated Highway in The Sky (HITS) pathway for courses and approaches.

Without the additional tweaks of the software engineers, however, SVS could not deliver the smooth response, depth of colors and detailed textures pilots enjoy today.

Thankfully, numerous options exist to retrofit SVS technology to virtually any cockpit, and avionics OEMs increasingly include SVS as a standard feature of their integrated avionics packages and glass-cockpit Primary Flight Displays (PFD). SVS is even available in combination with another visually-oriented safety enhancement – the Enhanced Vision System (EVS).

SVS: An Unblinking Alternative to EVS

Unlike EVS, which requires an infrared sensor to generate a visible image on a cockpit display, SVS produces its imagery from memory accumulated by all the data accumulated through those numerous satellite scans.

Inclement conditions hold the potential to defeat the infrared sensor's ability to detect the Infrared Radiation (IR) emanating from objects in the camera's field of view. Thick fog, heavy smoke, dust and heavy precipitation all take their toll on the ability of an IR sensor to detect heat signatures.

But when conditions don't attenuate with the IR signature, EVS shows everything present in front of the sensor's lens. So errant vehicles, roaming wildlife and humans show-up thanks to the infrared radiation they produce.

(However, in a twist of science, objects recently departed from where the sensor is pointed will often leave a residual-heat signature behind that is reflective of both the object's size and position, thereby confusing the picture.)

Conversely, since SVS generates its moving images from digital memory of three-dimensional scans, nothing short of a full malfunction of the display or software will interfere with the generated images.

What SVS lacks is the ability to display an object that was absent at the time of the scan but is now present in real-time.

The differences between SVS and EVS are sufficiently significant to prompt some avionics and software OEMs to develop hybrid systems that employ images from both source types.

SVS: What are the Benefits?

Despite being a pre-recorded rendering of the world as-scanned, pilots exposed to SVS almost universally embrace the tool for the unerring benefits it offers them whether day or night—Visual or Instrument Meteorological Conditions.

Flying with a friend last fall, we both believe that his SVS saved him money on what would otherwise have been a missed approach owing to poor visibility and a wavering localizer needle on his Course-Deviation Indicator (CDI).

On a different airplane during a night approach to an airport deep in a valley with tall mountains beyond the point of the procedure turn, the SVS delivered a clear view of the terrain directly beneath the glide-path.

That correct perspective gave comfort to the crew, showing them to be well above the terrain as they flew an LPV RNAV approach.

In yet another cockpit, maneuvering on the ground at a traffic-clogged air-carrier airport demonstrated how SVS can ease tensions while taxiing in an unfamiliar environment – particularly where markings of runways and taxiways were weathered, making them tough to read, especially at night.

SVS: Something for Every Aircraft

In just a few years SVS has become one of the avionics industry's most-coveted creations. Along the way, SVS has become a staple in late-model glass cockpits and a sought-after upgrade for panels.

Fortunately for aircraft owners and pilots, several options exist for adopting the technology. Consider these avenues for helping customers find their SVS solution…

While tablet-accessible SVS may not be a Technical Standards Ordered (TSO'd) instrument-approved tool, it nonetheless remains highly useful in numerous conditions. Knowing that many older business turbines lack the avionics capable of displaying SVS, multiple providers offer the tool as a function for Electronic Flight Bags (EFB). The tablet in use must have a GPS receiver or other position source to function.

Alternatively, pilots might use a remote sensor that wirelessly transmits the SVS data to the tablet.

The beauty of this option becomes apparent to the pilot who may fly different aircraft on different days, and as the tablet EFB travels with the pilot from cockpit to cockpit its operation is independent of the aircraft's avionics.

Late-model PFDs from virtually every avionics OEM offer the option of displaying SVS graphics behind the images of computer-generated flight instruments and navigation indicators. Modern PFDs typically offer the option to display the graphics of SVS systems – with many companies including the technology as a standard feature.

Variations naturally exist in the perspective viewed. Some SVS’ show an altitude-correct perspective covering a 10 miles range, while others display an SVS image from as far away as 30 to 50 miles. Aboard a fast-flying turbine the further, the better for the flight crew that will enjoy more time to set up their approach.

The perspective shown ultimately adjusts for altitude, so what the flight crew sees should match what they would see out the window.

How to Care For, and Feed your SVS

Unlike a precision camera lens or a finely calibrated watch, SVS hosts no moving parts. There are no digital sensors or glass lens elements (items indigenous to most EVS systems). The main maintenance chore required to keep SVS relevant involves only software updates as they become available.

So annual updates to SVS software – and assuring the GPS antenna is clean – pretty much cover the required maintenance.

Memory capacity of the display device may limit an operator to loading only one region at a time, depending on the avionics package used. 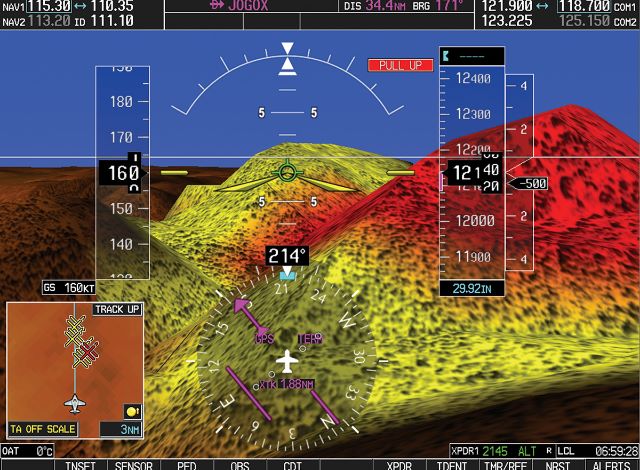 As long as an avionics stack possesses both the speed and memory to load the software, the costs of adding or upgrading an SVS system to your aircraft will be among the lower-cost and higher-value bargains in Business Aviation.

For operators that opt for a tablet EFB as the SVS source, the costs will not generally break into four-figure territory. Assuming a pilot already uses a tablet EFB, the cost may be as little as adding or upgrading the software.

For a glass stack already equipped with a data loader and a compatible display, SVS compatible with the hosted avionics may run into the low four figures for the first update, then a few hundred dollars for the annual SVS software update.

Operators of aircraft lacking a display but seeking to upgrade their panels can accomplish installation through the upgrade process for a small premium over a panel that lacks SVS.

A flight or two in inclement conditions or into a terrain-challenged airport is all it takes to make a pilot a Synthetic Vision System convert.  Seeing is believing… 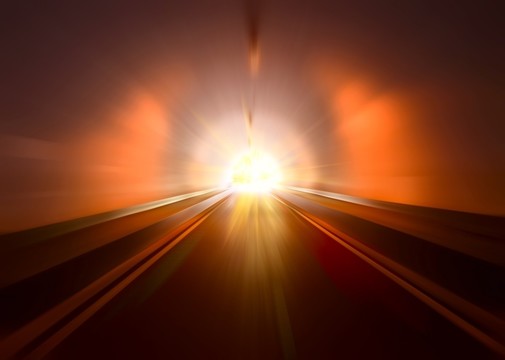