Why is nobody talking about aircraft lavatories? 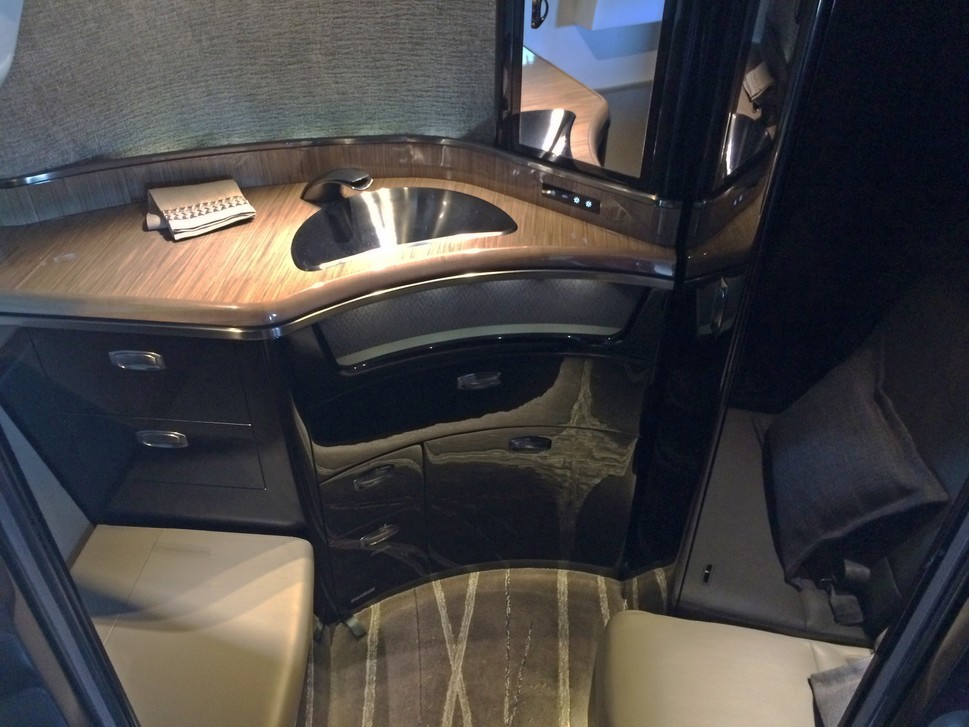 There’s more to an aircraft buying decision than the obvious performance numbers, notes Charlie Bravo’s Rene Banglesdorf. What many people don’t realize is that once you’ve had a few celebratory cocktails mid-air, something else becomes just as important…

Regardless of your flying situation, whether for business with colleagues or just by yourself and the crew, a poorly situated lavatory without the necessary amenities can lead to some embarrassing experiences. When flying private, we believe the lav should be in line with the rest of the aircraft when it comes to luxury and convenience.

With that being said, here are a few aspects of a lavatory to check out before downing that second or third (or fourth) cocktail on the airplane:

Smaller airplanes will often have only a curtain separating the cabin from the lavatory, or it may have a sorry excuse for a door that doesn’t extend all the way to the floor. In King Airs, the toilet seat is immediately in front of you as soon as you climb the entry stairs. There is usually a partition between the cabin and the lavatory, but it also shares the cargo area.

If the airplane is full, and happens to include a jump seat in the cargo area, things can get awkward. Add that to the fact that a belted lav can often double as a passenger seat, depending on how well you know your fellow passengers, and you may have just found your new seat for the rest of the flight…

Externally serviceable lavatories aren’t available in smaller, lightweight aircraft, but come standard in super-mid-sized jet and up. The smaller airplanes require service through the aircraft cabin, which is not a fun job to have... If the potty doesn’t happen to be of the flushing variety, bags are typically used with some sort of absorptive material for reduced leakage.

We’ve known pilots to use kitty litter, which some female friends have renamed ‘lady litter’. Whether your toilet flushes or not, “the business” is still removed through the cabin. Please make sure the unlucky fellow with that job doesn’t spill. Please…

3. The Location of the Lavatory

Some aircraft models have the lavatory located inconveniently between the cockpit and the cabin (as noted above). In this case, you might want to pray that you’re in one of the louder aircraft.

Specifically, the Pilatus PC-12 and the PC-24 have a forward lav, in order to use the rear weight allowance for cargo. I will say that the new PC-24 has an awesome, modern-looking streamlined lavatory with a rumored removable aft-lab. But still…pilots beware!

4. A Sink and Mirror

This one is pretty self-explanatory. Private aircraft are not required to have sinks, which can be a bummer in case of “emergency". And mirrors? Let’s just say we need more female design engineers in the aviation industry!

With these examples of private airplane lavs not being so private, I set off to find the best ones with the amenities listed above. Surprisingly, a Google search didn’t help. Instead, I climbed aboard a few private jets with a good friend at NBAA to see for myself.

Most larger jets, like Bombardier’s Global 5000 in this case, have a two-lav option available (with one lavatory for the crew in the front of the cabin, and a separate lav for the passengers located in the back). Full lavs on larger private aircraft are typically much roomier and more luxurious than those you’ll see on commercial airliners. Most come equipped with upgraded finishes, large mirrors, substantial cabinet storage space, and a lot more natural lighting than commercial aircraft lavs.

Dassault’s Falcon 7X is the first aircraft in its class to offer a shower on board, which can be used both in flight and on the ground. Dassault reports that the amenity was two years in the making, as "installing a shower without altering the comfort of the cabin or creating icing, condensation, leakage or other hazards was a considerable engineering challenge." Bravo, Dassault, bravo!

From those that I’ve seen, my favorite private jet lavatory to date is in the brand new Citation Latitude. Cessna has been notoriously lacking in female-friendly features, so the attention to detail in its design, both in the lavatory and cabin, is a pleasant surprise to say the least. An amenity of this quality in a super-mid-size jet will hopefully set the standard for jets of its size in the future.

I’d like to finish by thanking the Latitude designers who realized women bring bags. We travel with them, we need them during the flight, and sometimes we need them in the lavatory. Here’s to you!