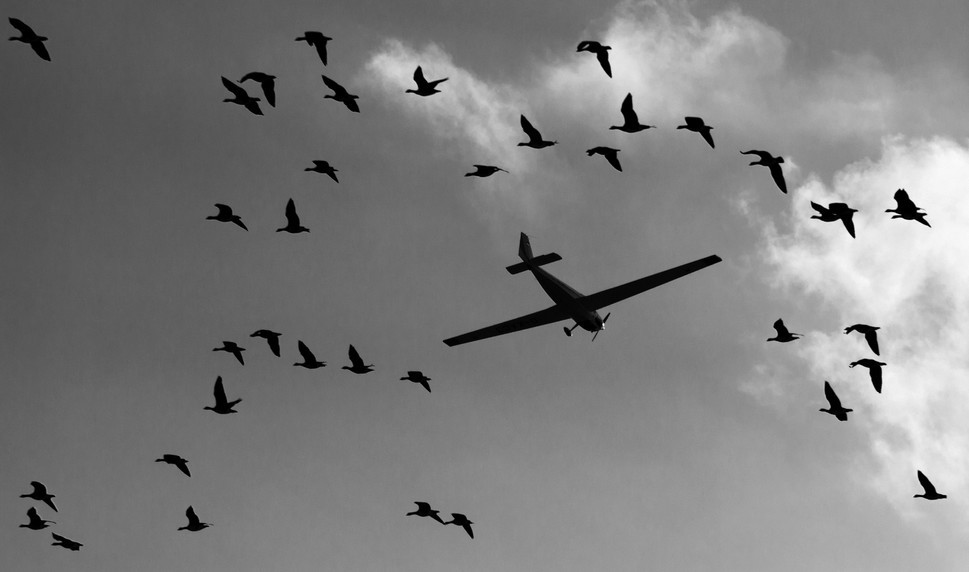 As bird migration season approaches, Dave Higdon recalls a pilot friend's story of a bird strike mid-air… He shuddered and his voice trailed off as he produced a smartphone photograph showing a concave impression in the leading edge of the vertical stabilizer on his airplane. How can you protect against a similar incident?

The incident happened while he flew across the middle of the continental US. Cruising eastbound at 13,000 msl my friend encountered, from behind, three separate flocks of “large birds”. His tale produced a bit of skepticism among some of the other pilots hearing his story. “Pure (hangar flying),” one said, “birds don't fly that high!”

As he produced his smartphone photograph as evidence, he quipped, “I guess it's a good thing we were all enjoying a tailwind, and flying the same track – I can't imagine the outcome had one of us been flying the reciprocal heading....”

All the pilots experienced a momentary cold chill.

The existence of migratory birds, their activities and use of airspace absorbs plenty of time for staff at several federal and state agencies, including FAA. Yet without experiencing an avian mid-air, most pilots think little about bird-strike potential (a) at altitude and (b) away from their home-airport environment, excepting those pilots who live under, or frequent areas of the country crisscrossed by migratory bird flyways.

While airport-area events account for the vast majority of bird strikes (this pilot experienced two in a single year), larger birds at altitudes ranging from the teens into the flight levels, represent a very real strike risk. Awareness and preparation can help mitigate that risk.

Beaks by the Numbers...

Between the start of 2005 to mid-point 2015, Denver International Airport alone logged 3,831 bird strikes, according to Embry-Riddle University Prescott's Center for Wildlife and Aviation. Dallas Fort-Worth had 3,040 during the same period, and a distant third shows 1,953 for Chicago O’Hare.

More than 10,659 reported strikes for the period attribute no airport; some of them involved aircraft in cruise, or transitioning through climbing or descending. Commercial operators alone report more than 7,500 bird strikes per year.

Reporting strikes and submitting bird remains for identification feeds the data banks that help the FAA and other state and federal agencies monitor the issue, while aiding their attempts to mitigate the threat. As of now, the numbers are growing in GA.

Let's be honest; the odds of us encountering a flock of birds at altitude is small, but flying unaware of the damage potential is a little like flying without knowing the weather ahead: the information is available, so why not use it?

This is really about avian-migration awareness as North America and Europe transition into fall. Right now birds that migrated north this past spring are now winging south toward their winter homes closer to the Equator.

North America's has four major migration routes that have been named the Atlantic, the Mississippi, the Central and the Pacific Flyways.

Except along the coasts, the flyway boundaries are not always sharply defined and both in the northern breeding, and the southern wintering grounds overlapping occurs.

In fact, south of the continental US, the islands and Mexico, in the region of Panama, parts of all four flyways merge into one. There are, as you might suspect, information sources to help keep flight crew aware of active migration routes and the birds transiting them. One good place to start with is The Cornell Lab of Ornithology's BirdCast where you will find enough information to help improve your chances of an uneventful flight.

After all, ‘uneventful’ is the best outcome we can get out of any flight. Until November, watch out and feel free to share your experiences and tips below…