Do you know what Aerial Broadcasting is? Or, do you know what this dedicated Aerial Work aviation sector does? Patrick Ryan "gets the scoop" for you and highlights many informative & fascinating aspects of this unique "News Reporting" aviation business sector.

Imagine! A television helicopter covers the story of a high pursuit of police vehicles racing after a suspected carjacking vehicle or giving ‘play-by-play’ of a major sporting event like the Tour de France.

Every person watching their TV, computer, smartphone, or listening on their car radio gets the same eyewitness view of the event as it unfolds in real time; better yet an aerial view rather than looking over the yellow ‘Police Line’ tape.

How does this happen? It happens because of the dedication of the Aerial Broadcast aviation sector.

Unlike the Aerial Cinematography sector of Aerial Work aviation, which artistically pre-plans and choreographs exciting motion pictures scenes over a long production timeline, the Aerial Broadcasting sector’s job is to bring you ‘On the Spot’ images in ‘Real-Time’ — as it happens, as if you were there now.

Major networks in television, internet, radio, and newspapers, all of whom wish to boost their reporting capabilities to their viewers or listeners with aerial footage of short notice or long-reaching media events, are increasingly relying on aerial footage or reports from the Aerial Broadcasting sector to provide them the ‘edge’ in today’s increasingly competitive media market.

The media race fuels the need for an aerial platform that can provide unparalleled market penetration and coverage options. This need is a critical option in special event coverage, breaking news events that cannot be captured by traditional land-based video coverage, or whose breadth of technical capabilities requires a quicker response and more flexible coverage option.

What is Aerial Broadcasting? In the world of news, weather, and sporting event reporting, Aerial Broadcasting supports or, better yet, provides services to the Electronic News Gathering (ENG) sector of the media industry. ENG is when journalists and media networks use electronic video and audio technologies to gather and present news either within a news station or outside the station.

When it comes to outside the news station, obviously Aerial Broadcasting supports the branch of ENG, which is the Outside Broadcast (OB) function. In the world of ENG, Aerial Broadcasting is tasked with recording and transmitting audio and video footage in real time to a Remote Pickup Unit (RPU).

Then the RPU transmits the audio and video back to the television station, where it joins the main air chain. Sometimes several Aerial Broadcast aircraft are used to relay the signal across vast distances so they can down-link to a satellite truck, production truck, and even regular telephone line if necessary.

What are the different services Aerial Broadcasting firms providing? In general, Aerial Broadcasting firms are independent commercial companies that partner with numerous news outlets, radio stations, and newspapers to capture breaking news, celebrity movements, and milestone events. In addition, these firms will often paint and brand their aircraft with their client’s logo or station identifier. 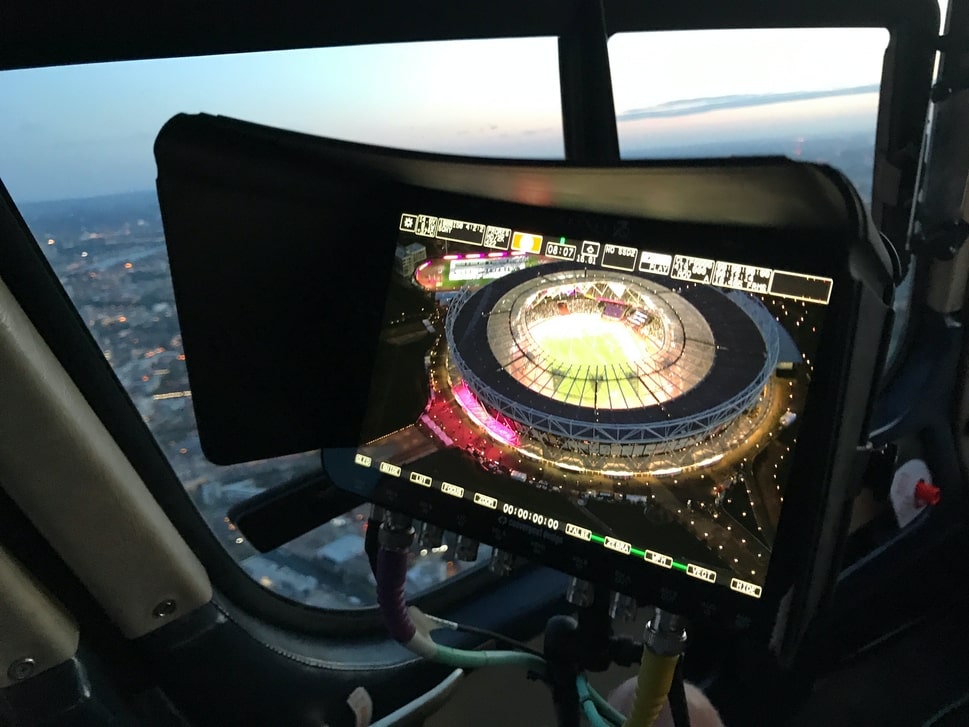 Besides capturing live footage or news footage, the Aerial Broadcast sector also supports Electronic Field Production (EFP). EFP uses both Electronic News Gathering practices and studio production processes which takes place in the field rather than in a studio.

While Electronic News Gathering footage is shot quickly to respond to a news event in real-time, Electronic Field Production is thoroughly planned to provide optimal audio, lighting, and video outside the studio. Some examples of EFP include sporting events and large entertainment events, whereas events requiring ENG filming include natural disasters, crime scenes, and accidents.

What are the planes and kit used by Aerial Broadcasting? Depending on the story, the type of aircraft and the ENG/EFP systems deployed can vary — from a street reporter using a mini unmanned aircraft to record a breaking story at street level, transmitting the image via smartphone, to — at the other end of the spectrum — a King Air 90 relaying audio and visual signals to a Remote Pickup Point.

As for aircraft and like so many Aerial Work sectors, Aerial Broadcasting leverages many different types of aircraft and platforms based on the client’s needs. However, the order of dominance is helicopters and fixed-wing aircraft, followed by Lighter Than Air (LTA) platforms, and unmanned aircraft.

By far, the helicopter is the dominant platform in this Aerial Work sector. Helicopters are perfect for mid- to low-altitude observations with high-resolution broadcast cameras. In addition, helicopters are cost-effective when covering large metropolitan areas and responding to quick regionalised events. Plus, the flexibility of helicopters makes it easy for these platforms to film in congested or remote locations. Some of the preferred helicopters utilised by leading Aerial Broadcasting firms are:

Fixed-wing aircraft are efficient when used for long-endurance, high-altitude operations and are quieter than a helicopter when integrated with a ‘stealth sound suppressor’ or ‘Hush Kit’ for noise-sensitive events.

Like fixed-wing Aircraft, LTA platforms (Blimps, Airships, Zeppelins, etc.) are primarily used to cover sporting and open-air venue events. Modern LTAs are highly mobile, flexible, quiet, and stable camera platforms, giving extended time-on-station and other advantages when delivering a wide-area perspective. Some of the types of LTAs that have, will, or are supporting Aerial Broadcasting are: 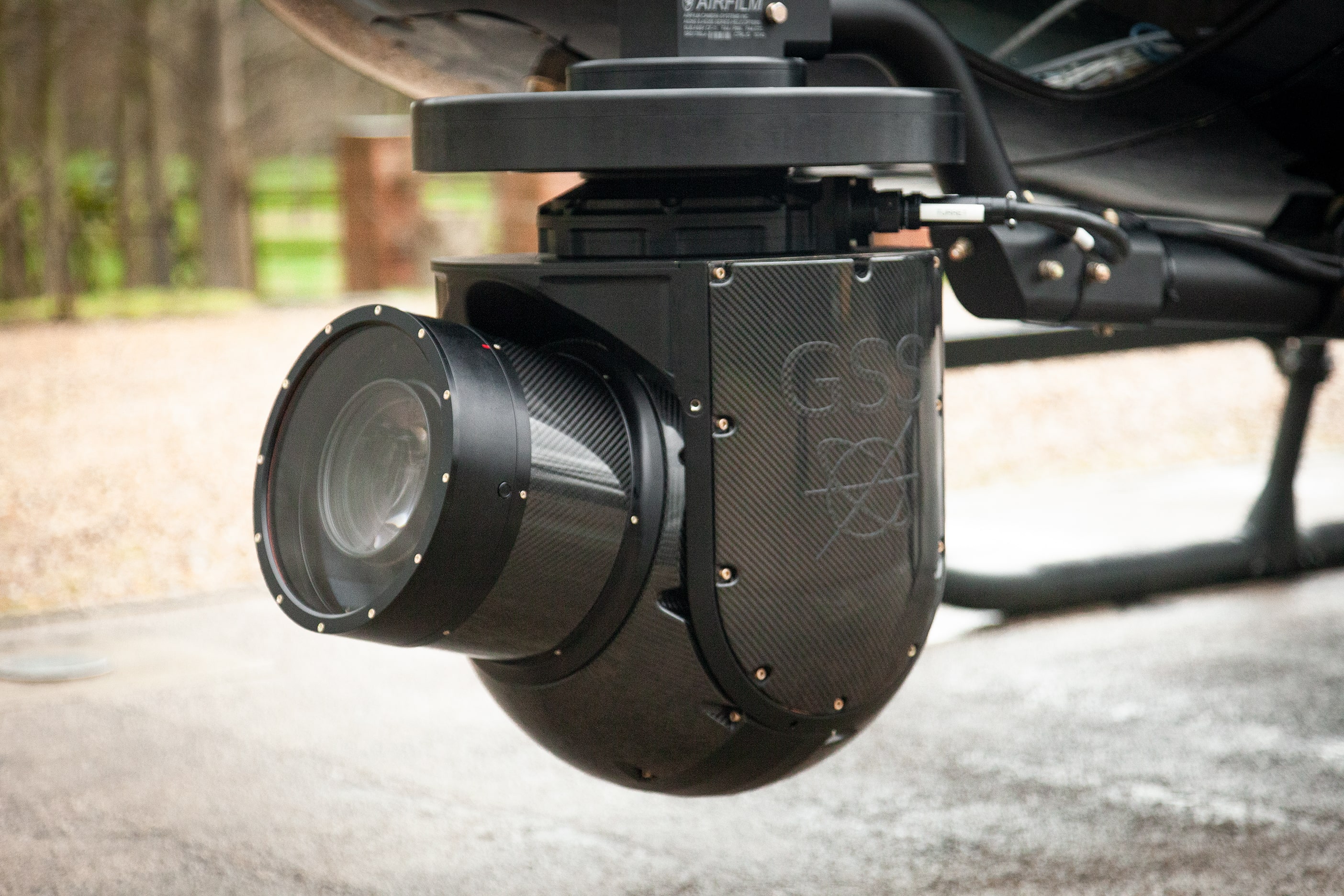 Using unmanned aircraft (drones) for news reporting or capturing the action of an open-air event is a leading-edge and growing way to gather information in Aerial Broadcasting. Due to escalating conflicts and natural disasters worldwide, reporters need to get to the heart of the action at the street or neighborhood level; an unmanned aircraft is a perfect tool to leverage for this type of task.

The only way to do so is to get an in-depth localised area view of the situation from an elevated position. The aerial unmanned aircraft video provides a spontaneous ‘upper hand’ sense of scale in a disaster and a different perspective from the smartphone footage of those at the scene.

From a business ‘Bottom line’ perspective, many broadcasters don’t have the budget or means to hire or operate manned aerial broadcast aircraft, but using unmanned aircraft for ‘One-Off’ news reporting is a cost-effective alternative.

However, on the other hand, unmanned technology is still emerging, and the regulatory standards (without fines or penalties) to ensure such platforms are safely integrated within all airspaces are still being developed. With this, broadcasters risk relying on non-established aviation capability vs. established platforms, especially when budgets get tight, and time is critical. Here is a small example of the types of unmanned aircraft that leadingAerial Broadcasting firms are lending towards:

When it comes to the systems and kit Aerial Broadcasters utilise, they operate some of the most leading-edge equipment in the industry from companies such as GSS, Shotover, Churchill Navigation, Sony, and Fuji.

Designing and building an ENG aircraft is a significant engineering task. A fully outfitted television news aircraft has multiple cameras, record/playback capability, switching, monitoring, off-air receiver, and microwave links. In a genuine sense, it is a complete airborne television studio, including a studio-to-transmitter link.

However, the design & integration task is complicated because space is limited in most aircraft, while heat, power loads, and vibration are extreme. Furthermore, all equipment must be integrated physically and electrically according to airworthiness standards.

Specifically, the general type of equipment or configurations on most Aerial Broadcasting aircraft include:

When Aerial Broadcast aircrews are on the scene, be it a ‘Breaking News’ event or covering a professional golf tournament, the crew is probably juggling six different radio frequencies, continuously communicating with air traffic control, media network ground sites, studio technicians, and even news-sportscasters.

Besides this, the crews must maintain their airmanship discipline to ensure their flight doesn’t turn into the next ‘Breaking News’ in itself.

Because most Aerial Broadcasting flights are conducted at low altitudes and speeds, crews have to maintain the correct position and control and watch out for towers — including high-voltage mountain regions, they contend with unpredictable winds and density altitude conditions that can challenge the performance of any aircraft and crew.

It goes without saying that Aerial Broadcasting crews fly entirely by visual flight rules. So, besides flying ‘low & slow’, crews will frequently fly in restricted airspace over cities, nuclear power plants, government installations, and over nature areas to get the story, i.e., a challenge when it comes to coordinating and flying at the same time.

When it comes to working conditions and flight hours, it can vary from sitting on standby and waiting for ‘Breaking News’ events, to being on the road for three weeks and flying every day covering a major sporting event. For instance, the helicopter crews of Hélicoptères de France (Hdf), who cover the Tour de France with three helicopters and crews annually, amass about 110 flight hours per crewmember during the coverage. 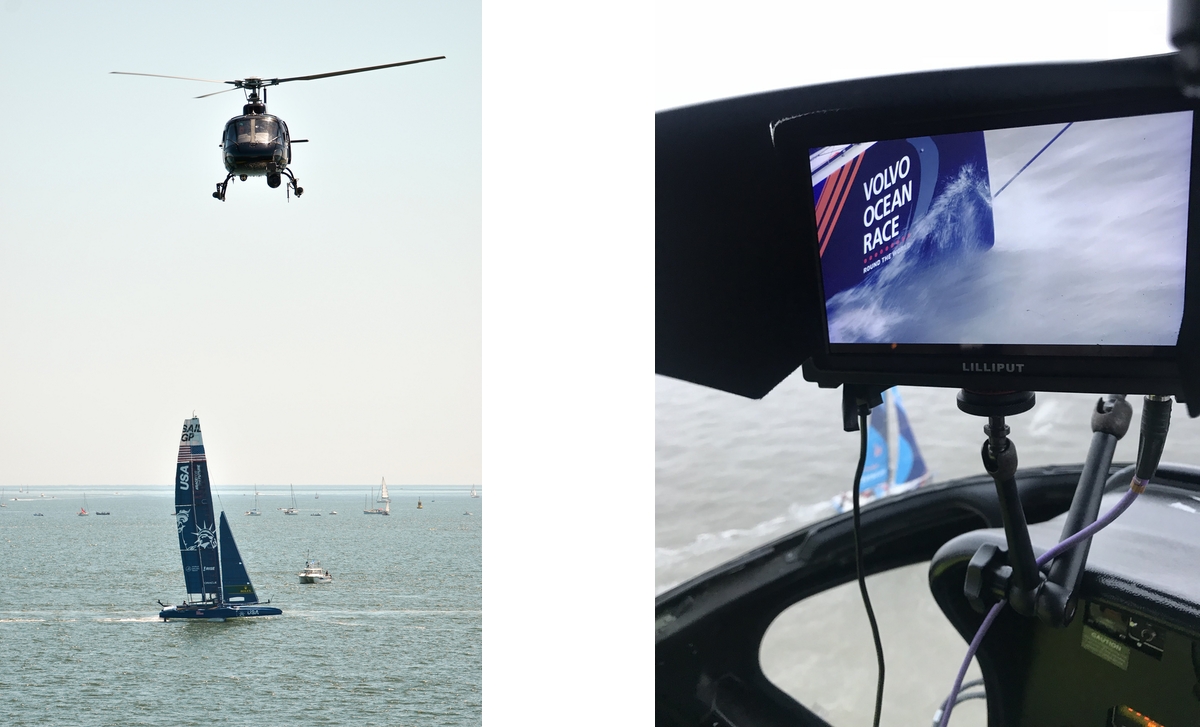 However, with technology evolving at ‘Mach’ speed, the capabilities and systems Aerial Broadcasters leverage today will change, i.e., platforms, cameras, datalinks, processors will all miniaturise and have better connectivity.

Maybe not in the near future, and not for more extensive area coverage, but media studios and street reporters will rely less and less on traditional aerial platforms for ‘one-off’ stories. The individual reporter will be able to report live using mini-unmanned aircraft carried in their backpacks, i.e., the beginning of the next new breed of Aerial Broadcasters.

So, as you can see, Aerial Broadcasting is more than a solo pilot announcing traffic conditions over a major metropolitan city or producing blockbuster movies like their Aerial Cinematography colleagues. Instead, the Aerial Broadcasting sector is a focused and well-organised Electronic News Gathering (ENG) specialised team in the air. Additionally, Aerial Broadcasting is not just concerned with capturing images but also processing them, transmitting them, and more.

The next time you see an Aerial Broadcast aircraft flying over a sporting venue, or you watch ‘live’ aerial captured images during a ‘Breaking News’ media event, think of the unique aircraft, technology, and highly skilled aircrew professionals that bring you real-time images in a quality format within seconds.

Without Aerial Broadcasting, we as humans would be deprived of the best perspective for learning and being informed, i.e., ‘The Birds Eye View!’

Catching the Bug: Understanding Classic Aircraft
How Aerobatic Flight Training is the Great Level...
Movie Pilots: When Helicopters Fly for the Stars