The Kodiak 100, a utility aircraft manufactured in Sandpoint, Idaho, is new to the Daher turboprop aircraft family. This high-wing, unpressurised, single-engine turboprop has a fixed tricycle landing gear and is suitable for STOL operations from unimproved airfields.

It is a utility aircraft that can accommodate 10 people, has outstanding short-field takeoff and landing capability, and a generous useful load. Its unique STOL performance comes from a discontinuous leading edge on the outboard wing and the 750 hp (559 kW) Pratt & Whitney Canada PT6A-34 turboprop engine.

Passenger seats are track-mounted and are easily and quickly removable for reconfiguration. The Kodiak also has access doors for the pilots and the aft clamshell door, with steps for passenger boarding, and allows cargo loading with its large square door.

The Kodiak’s aluminum fuselage can be repaired in the field and offers a 49.25 in x 49.25 in cargo door.

Debuting in 2018, the Kodiak 100 Series II included a smarter, pilot-friendly cockpit, improved situational awareness and safety, and offered more comfort for all passengers.

It featured a major avionics upgrade, to the Garmin G1000 NXi Suite. This is similar to the original G1000 with three 10-inch screens, but is more responsive and offers much more capability and feature sets, including Bluetooth connectivity via FlightStream 510.

With the Series III, Kodiak Aircraft builds on its tradition of continuous improvement and delivers a standard equipped aeroplane that is “light-years ahead of the competition,” claims Daher.

Introduced this year, the Kodiak 100 Series III is “a further refinement of a modern, safe and rugged airplane”. The Kodiak 100 was designed from the outset for float operations with no need for structural or aerodynamics upgrades.

New to Series III, all Kodiaks will be equipped with pitch-latch propellers and lower fuselage skin gap fillet sealant, as standard.

The Kodiak 100 Series II is an unpressurised ten-seat airplane which is equipped with Garmin’s G1000 NXi avionics. It is capable of operating on uneven and ultra-short runways, or on water in the amphibious version. Its unique combination of robust construction and remarkable 3,530-lb. (1,605 kg) useful load has resulted in many additional applications for the Kodiak, including special missions, medevac, skydiving platform, and more.

Current TBM versions in production are the TBM 910, equipped with Garmin’s G1000 Nxi avionics system, controlled by a keypad; and the TBM 940, featuring Garmin’s G3000 avionics with touchscreen controller, an autothrottle, and HomeSafe – based on Garmin’s new emergency autoland system.

Both models offer “increased automation and superior performance”, says Daher, with a maximum cruise speed of 330 knots and “high efficiency”, which results in it achieving a 1,730 nautical-mile maximum range (at a fuel consumption of only 37 U.S. gallons per hour in economy cruise).

As of 31st December 2020, a total of 280 Kodiak and 1,018 TBM aircraft had been delivered to international owners and operators, with the global fleet accumulating some two million flight hours.

Both it and the TBM can be effective airborne platforms for surveillance operations, with “a very competitive cost-performance ratio compared to existing solutions”, claims Daher.

“As a result, they are an alternative – or complement – to unmanned aerial vehicles and to heavier aircraft in a platform that is rapid and efficient to deploy, with limited logistics requirements,” added Nicolas Chabbert, senior vice-president of Daher’s aircraft division.

“The Kodiak 100, a utility aircraft manufactured in Sandpoint, Idaho, is new to the Daher turboprop aircraft family. This high-wing, unpressurised, single-engine turboprop has a fixed tricycle landing gear and is suitable for STOL operations from unimproved airfields.” 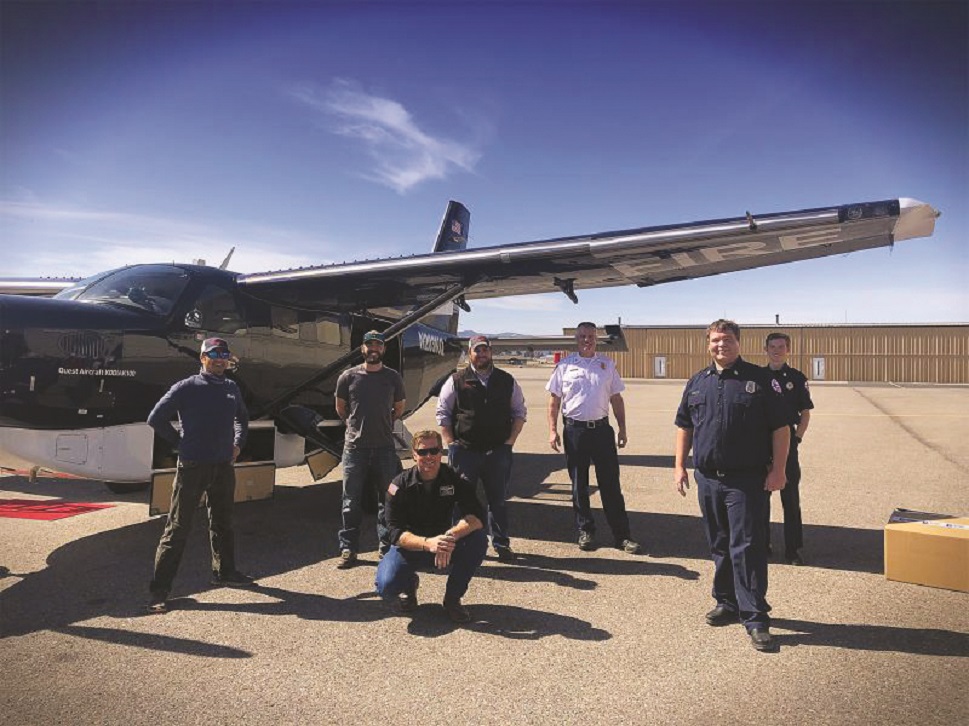 The Kodiak was originally designed as a rugged aircraft capable of carrying passengers and cargo to remote places for humanitarian missions. These characteristics make the Kodiak the perfect platform for a wide spectrum of missions, including.

Air Ambulance: Medevac operations have been at the heart of the Kodiak design from the beginning. The plane is quickly and easily adapted from passenger and cargo hauling to medical airlift in emergencies. Kodiak air ambulance services have been used in the aftermath of recent earthquakes, hurricanes, tsunamis, and floods. More recently Arkansas air ambulance has ordered two Kodiak 100 series III aircraft in this configuration.

Firefighting Support: Because of their efficiency, excellent visibility, long-loiter, and off-airport capabilities, the Kodiak has increasingly found favour in the wilderness fire management and suppression missions. Bridger Aerospace, based in Bozeman, Montana, performs firefighting and aerial survey duties with four Kodiak 100s.

Bridger’s primary missions have involved spotting for firefighting crews and aerial tanker drops. The Kodiak is ideally suited for such “Lead Plane” function as it can direct the air tankers to the target. Meanwhile the Kodiak’s short takeoff and landing characteristics enable operators to drop crews and supplies to very short and narrow back-country strips.

Skydiving Operations: The Kodiak is quickly and easily adapted to parachute operations with bench seating and a special roll-up door. The Kodiak has the ability to carry up to 15 parachutists to 10,000 ft altitude in 10 minutes, performing three rotations per hour, providing operators with the best return on their aircraft investment.

Wildlife Management: With budgets tight and on-the-ground personnel limited, the Kodiak has proved to be an effective and economical solution for governmental management of wildlife and habitat. In Botswana, Kodiaks have supported elephant and rhino anti-poaching efforts while also serving as tourism transport and medical evacuation.

Intelligence, Surveillance & Reconnaissance (ISR): Meta Special Aerospace, an ISR mission provider based in Oklahoma, is the most recent customer in this category. ISR technology has become increasingly important for police and national security services worldwide. The Kodiak is the perfect platform with approximately 200 amps excess power available for mission systems. It is easily adaptable to state-of-the-art equipment and can loiter for up to ten hours at very slow speeds, virtually undetected.

Aerial Mapping: Super accurate aerial mapping using conventional terrain measurement tools or advanced technologies, like LIDAR or Synthetic Aperture Radar, is made all the more feasible with the stable Kodiak platform. Able to carry a useful load of 3530 lbs for over 1000 nautical miles, the Kodiak enables mapping teams to complete their tasks quickly and cost-efficiently.

These modifications were already validated by Daher through several flight test campaigns, followed by the operational use of a 110 lb. (50 kg) ultra-high-definition camera as a video platform. These campaigns confirmed that the TBM retains its handling qualities and flight envelope performance in the special mission configuration.

Daher also offers a large range of services associated with its aircraft and for equipment within its scope of expertise.

Design, engineering & certification: Daher Aerospace masters all the processes under the EN9100 quality standard thanks to its different departments: Engineering and Production departments, Flight Test, Certification, Acceptance and Delivery.

Daher Aerospace received the following approvals from the European Aviation Safety Agency (EASA), which are also recognised by the FAA:

With full access to all of the engineering data used in the design, Daher Aerospace can help aircraft operators to modernise avionics of fixed-wing or helicopter aircraft. Our modification engineering staff can oversee integration of special missions equipment by providing design, engineering and project management expertise while partnering with other industry leaders.

With our expertise in large-scale systems integration, Daher offers airframe and systems upgrades or modification that include the engineering, design, parts and integration manuals as well as customer support.

Daher Aerospace has been a pioneer in the installation of Garmin all-glass integrated flight deck on aircraft under 6.8 tons. Its avionics department has proven expertise in the modernisation and maintenance of ‘state of the art’ avionics suites and systems such as autopilots. Daher Aerospace perform all aspects of avionics upgrades or modifications, from feasibility studies to installation, testing and support.

Daher Aerospace operates its own flight test centre which is capable of performing acceptance flights, maintenance flights, control flights, ferry flights, and test flights. Its pilots, technicians and engineers are rated on fixed-wing aircraft and helicopters.

Besides offering flight services, Daher Aerospace’s Flight Test Center offers its services in the installation of flight test equipment; assistance in creating flight test centres for manufacturers who do not currently have one; and assistance with flight test-related documents. Daher Aerospace is also capable of performing a variety of in-flight evaluations, including vibration, acoustic, pressure, and temperature tests.

24 hours a day, 7 days week, Daher Aerospace send spare parts all around the world, to support a fleet of more than 6,000 aircraft in service in more than 70 countries.

Are you considering buying a turboprop aircraft? Why not check out our Turboprops for sale listings now?