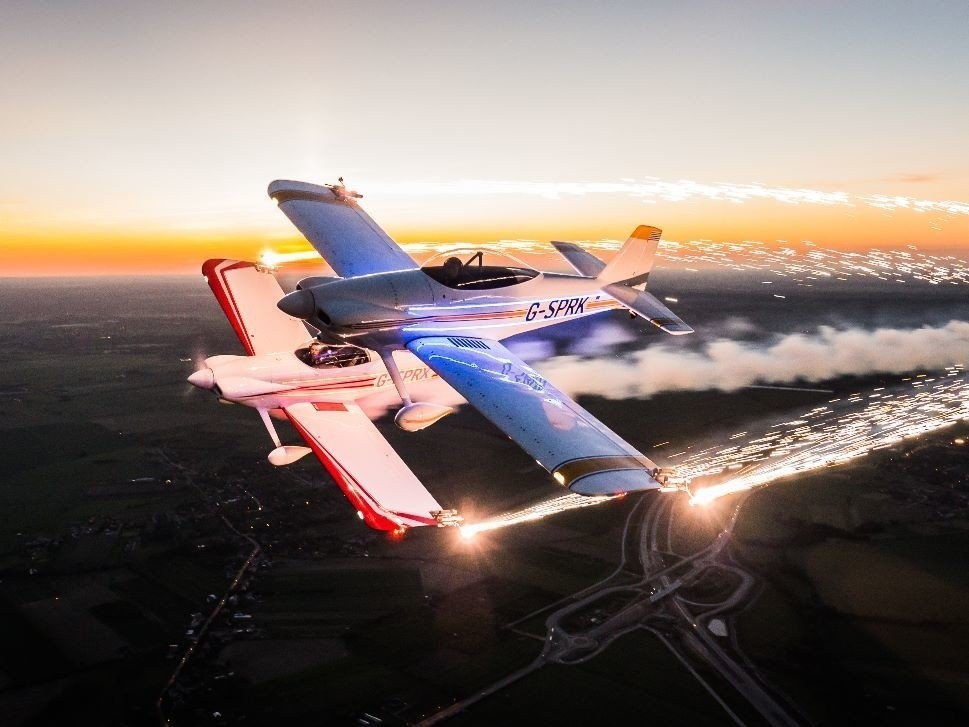 "Smoke on... pyros on...break break... GO!" That's the call from the FireFlies lead pilot Jon Gowdy as he and his team-mate Andy Durston literally light up the sky with their stunning twilight synchro display…

With their debut just over two years ago the FireFlies are taking the UK display circuit by storm with their dazzling and innovative displays. But it’s not just the UK that's getting the bug to see more of them... they've got booking requests coming in from across Europe and even further afield.

But who are the wizards behind the smoke and mirrored loops?

Lead pilot Jon Gowdy drives the display from his frontman aircraft G-SPRK, a Vans RV4. Jon's background includes a professional career with Air Atlantique flying the DC3, a stint down at the South Pole flying Twin Otters for the British Antarctic Survey, and presently as a pilot for British Airways on its 747 fleet.

Gowdy has flown on every continent, which is something few pilots can say. His Display career includes such highlights as flying the Dragon Rapide, the Vampire and the Spitfire – not to mention a successful season (or three) in the much-loved Twister Duo Display Team.

Formation pilot Andy Durston follows Jon's every move at speeds of up to 210mph just feet away in his RV4, G-SPRX. Andy's professional career started in the Royal Navy flying the Tucano, Hawk and the infamous Harrier. His current working seat is, like team-mate Jon, at British Airways on the 747 fleet.

Andy has displayed in Yaks and Pitts and has remarked that the highlight of his flying career is having been lucky enough to fly ML407, the Grace Spitfire.

Following two very successful seasons the FireFlies are looking to shine even brighter this year as they prepare to enter the 2018 season with a full calendar of bookings and the exciting news of their new sponsor (shared with GA Buyer Europe first!), Catto Propellers.

Catto is an industry leader in the complex world of propeller blade dynamics and development, and team-mates Andy and Jon are very enthusiastic about the new relationship. "We're thrilled to be associated with such a great company as Catto and the aircraft are in the best shape we've ever had them coming into this season. It's going to be a great year for us," promises Andy.

"I just got back from visiting Catto in California, what an impressive operation they run. First class! I'm proud to wear their badge," Jon adds.

“We’re delighted to be supporting the FireFlies,” says Nicole Catto, Director of Sales. “The FireFlies are innovative and very exciting to watch, we’re thrilled they’re using our Catto Propellers to maximize the performance of their aircraft. We wish them every success for the coming season,” she adds.

But enough of the talk... what are the FireFlies serving up for the spectators this year? The FireFlies offer a fine choice of displays including a daytime aerobatic display and a twilight pyrotechnic display.

The Daytime display is an exhilarating mixture of close formation and opposition flying, utilizing dynamic manoeuvres and smoke trails to highlight what man and machine can really do.

The twilight display is something altogether different. Something only a handful of pilots in the world are able to put on for the open-mouthed spectator below.

Using specially designed pyrotechnic rigs fitted to the wingtips, controlled and sequenced from the cockpit (along with the smoke), Jon and Andy put on the best firework display you'll ever see as they rocket through the dark sky creating a dazzling spectacle of light and colour. Think shooting stars... but in formation!

The team also makes availability in their display calendar for a few private functions too. So if you want to mix a top event with a bit of top gun... then check out the website below to learn more about how the FireFlies can light up the sky for you.

From corporate events to weddings, from a giant hashtag to a beautiful big heart painted in the sky, the FireFlies always put on a show that will put a smile on your face.

Look up and look out for the FireFlies Display Team as they light up the sky during the very exciting 2018 display season.