Some of the most famous blockbuster movies and TV scenes in history have come from the air. The high vantage point that you and I rarely see in day-to-day life creates a unique experience for any viewer. So, what is this cinematography wonder, and what they do?

Aerial Cinematography has long been a pinnacle of cinema and TV. Its capability to capture a film’s subject matter within a majestic landscape or bring viewers to unbelievable locations is instantly recognizable to anyone familiar with motion pictures, TV shows, commercials, and documentaries.

Today, the Aerial Cinematography sector is a critical part of the overall cinematography industry with it a high level of technical sophistication and talent. At some point in production, a filming operation will require an aircraft to capture imagery or support other elements of the movie-making process.

The Art of Aerial Cinematography

As a term, Aerial Cinematography is a filming technique that uses the full spectrum of aircraft to gain an elevated perspective. It allows filmmakers to access entirely new domains from previously inaccessible vantage points to film large-scale environments and achieve stunning and dramatic visual storytelling cost-effectively.

By Tradition, aerial cinematography shoots stunning ‘shots’ and dramatic action scenes, and has been long used in action films. However, aerial filming has revolutionised other cinematography fields such as nature films, drama series, and documentaries in recent years.

Because of this, it has become a prolific television, advertisement, and cinematic technique used in nearly every feature presentation you see on the ‘Big Screen’ or your TV, computer, or smartphone.

So, when did Aerial Cinematography enter the scene? Like with so many Aerial Work aviation sectors, the Aerial Cinematography sector started in aviation history right after the First World War. With a surplus of military aircraft and out-of-work pilots and the expansion of the relatively young motion picture industry, it allowed both industries to connect and utilise a new means of providing a unique perspective for visually telling a story.

By the 1920s, both the aviation and motion picture industry started to flourish in Southern California or, better yet, ‘Hollywood’. Due to the predictable sunny weather of the Los Angeles area, both the aviation sector and the movie industry flourished. Because of this fortuitous situation, aviation was quickly embraced by many top Hollywood producers and directors.

Up to the Second World War there were few advancements in Aerial Cinematography. However, after the Second World War and the introduction of the helicopter, the sector expanded both in capabilities and options for aerial camera crews, producers and directors to create new scenes.

Fast-forwarding to today, the introduction of unmanned aircraft has yet again expanded the capabilities and options for both the Aerial Cinematography and the film industry. Unmanned aircraft or drones have opened new airspace at unique flying levels or in enclosed spaces that allow filmmakers to reach fresh perspectives.

The Tricks of the Trade

When it comes to what the Aerial Cinematography sector specialises in, it’s more than just filming from an aircraft (Camera Ship). Many more unique services are associated with flying and filming that “doesn’t meet the eye.”

Scan the Aerial Cinematography industry sector and you’ll see that this Aerial Work community provides numerous vital services that parallel the process of development, pre-production, production, post-production, and distribution of a film. Here are just a few of these unique services that support this process:

Location scouting or aerial reconnaissance is a vital process in the pre-production stage of film-making. Besides looking for an aesthetic ‘location’ for filming, location scouting determines everything from the feasibility of logistics and access for filming.

Because of the advantages of aircraft, especially fixed-wing and helicopters, Location Scouts, with the support of Aerial Cinematographers, can cover vast distances and changing geography versus trekking or driving for hours to find the perfect site.

On the dangerous but thrilling side of movies and film making, the Aerial Cinematography sector provides aerial stunt coordination and production for high-altitude flying to low-level, high-speed aerial stunt operations.

The typical stunts range from rappelling from helicopters, lowlevel air-to-air formation flying, skydiving, or jumping from an aircraft. Plus, conducting stunts over congested areas, explosions, and flying near fast-moving ground vehicles.

The production of a film is not as simple as the well-choreographed and edited film you just watched. The logistics involved in producing a film are complex and intense, and bringing many separate parts together while keeping the project on-time and on-budget is challenging.

To manage this, many producers and directors rely on Aerial Cinematography firms to arrange the transportation of cast, crew, and equipment from virtually anywhere to the desired film location.

Thus, air transportation becomes critical in mitigating the risk of standard travel delays or, better yet, flying over bureaucratic obstacles, rough terrain (and even rush-hour traffic) to minimise any delays to the project — perhaps with the aim of achieving the ‘Premiere’ date.

On top of that, Aerial Cinematography firms even coordinate the filming of movie scenes in airport terminals, hangars, control towers, airport ramps, and runways. 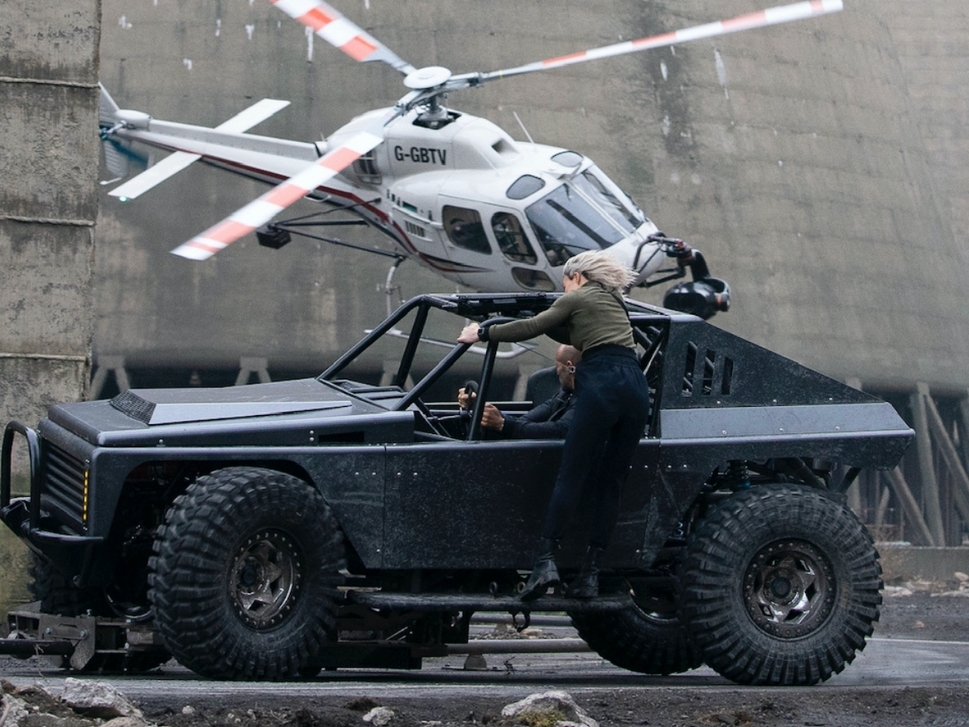 Regarding the ‘Lights, Camera, Action’ of Aerial Cinematography, the aircraft, cameras, and other leading-edge technology make it technologically happen!

As for Aircraft, Aerial Cinematography leverages many different types of aircraft based on the expected filming perspective and outcomes.

However, if you were to generally rank-order the preferred aircraft utilised in filming it would perhaps start with helicopters first, unmanned aircraft second, fixed-wing aircraft third, and Lighter Than Air (LTA) platforms following in small numbers.

Helicopters On the helicopter side of Aerial Cinematography, helicopters are perfect for mid- to low-altitude observations with high-resolution cameras. In addition, helicopters are most cost-effective when covering large local areas.

Plus, the maneuverability of helicopters makes it easy for these platforms to film in congested urban areas or remote locations where drones and fixed-wing aircraft are not as effective or efficient. Some of the preferred helicopters utilised by leading aerial filming firms, and their possible roles, are:

As mentioned before, drones provide a new point of view for the filming industry. The perspectives from low altitudes or the open areas of confined spaces (e.g., warehouses, castles, etc.) are often attainable with unmanned aircraft.

Their affordability also makes them a frequent choice of aircraft. Furthermore, drones are versatile and can pull the viewer in close range at wide angle, giving the audience intimate scenes. The category of drones used spans across fixed-wing, rotor-wing to LTA aircraft.

Given that most unmanned aircraft used in Aerial Cinematography operations are rotor-wing platforms, the distinction of how they're used relative to manned helicopters is different.

Besides the significant lift and flight endurance differences between the two types of platforms, camera helicopters are preferred by directors for the "man-in-the-loop" and in-the-air shots while creating visually exciting scenes simultaneously. On the other hand, drones provide the staple of critical and ancillary production imagery.

Primarily as a Camera Ship, some of the preferred unmanned platforms that are utilised indoors or outdoors on filming projects are:

Relating to the cameras and technical gear the Aerial Cinematography community leverages to turn a basic airframe into a Hollywood studio, the industry relies on very specialised systems designed explicitly for cinematography.

Plus, the Aerial Cinematographers have adapted new capabilities from other Aerial Work sectors, e.g., Airborne Law Enforcement and Aerial Surveillance, etc., to enhance their filming and production abilities.

Here is a sample of the camera and supporting systems the Aerial Cinematography sector operate:

The Stars of Aerial Filming (the Aerial Camera Crew)

Even though every blockbuster film has its superstars, the real stars, when leveraging Aerial Cinematography, are the men and women who blend aviation with the art of cinematography.

They know the capabilities of aircraft, camera systems, and the art of filming. They know that getting ‘the Right Shot’ is the mission, and their expert aviation professional talents are part of delivering the best picture. Though filming from the air or the ground is deeply exciting and rewarding, it requires specific skills and a lot of talent to get the right shot.

Even though the Aerial Cinematography sector is supported by many types of highly skilled professionals that ensure filming is safe and successful, here are two of those professions that are either the core of operations or bring a unique aspect to filming from the air:

As mentioned before, Camera Pilots are also responsible for flying any aircraft that appear as action props. Their duties may involve performing difficult stunts requiring a high degree of expertise.

Additionally, Camera Pilots may also perform aerial unit director roles, scout for locations, work out aerial action sequences using models and storyboards, and direct these sequences from the back of the aircraft or piloting.

Furthermore, the Camera Pilot may also carry out the duties of the aerial coordinator, which include performing more logistical tasks such as finding suitable aircraft and crew within a given budget and schedule.

Moreover, to take the ‘shot’, Aerial Camera Operators are also aircrew members. Along with the Camera Pilot, they participate in the basics of each flight (e.g., aviate, navigate, and communicate) and ensure every aspect of each flight is safe and accident-free.

Now you know, Aerial Cinematography is genuinely a part of the ‘Cast & Crew’ of the filming industry and the Aerial Work aviation community. Like other Aerial Work aviation sectors, Aerial Cinematography consists of talented professionals and technical systems supporting film producers and directors in delivering eye-catching views and perspectives.

When it comes to the future and the world demanding more visual experiences, Aerial Cinematography will continue to grow and invent new ways of ‘catching our eyes’ from the sky. As you can see, Aerial Cinematography is a serious and important actor in both the Aerial Work aviation sector and Hollywood. With that said, and as a film director would say at the end of filming – "That's a Rap!"

Day 37 Update on Zara Rutherford's epic journey ...
How Aerobatic Flight Training is the Great Level...
Movie Pilots: When Helicopters Fly for the Stars