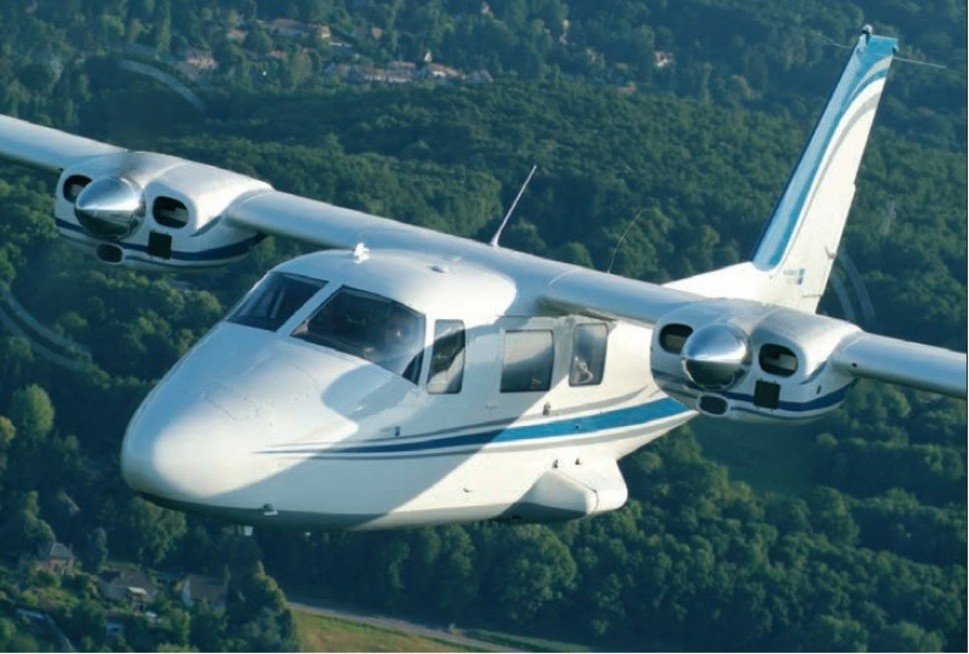 Vulcanair Aircraft are made-to-order certified airplanes handcrafted in Naples, Italy. Our aircraft are all metal high wing twins. At first glance the new generations P68 Aircraft are immediately noticeable by the original eclectic mix of aluminium construction and solid feel.

Modern fluid aerodynamic lines characterize the aircraft look. Entering the aircraft’s cockpit the smell of the handcrafted leather and the vision of the new state of the art Garmin avionic suite mark a noticeable improvement relative to the P68 Series previous generations. Vulcanair Aircraft re-introduced the P68 Series aircraft back in 1999 with production resuming in the early 2000s. Since then, the aircraft has gone through an extensive and continuous modernization.

The new avionics and over 130 modifications and improvements introduced only last year make the aircraft even more fit for function. In terms of flight qualities the aircraft was a success since the beginning and still today there are no other light twins that can match its precision, stability, and benign flight qualities. Vulcanair’s approach on aircraft design is that for a given mix of aircraft size power and configuration there is little that can be improved on the P68 excellent and successful design.

The P68 Series aircraft can satisfy a number of different users. GA private or small commercial operators, will appreciate its roominess, the twin-engine configuration and low operating costs. In its surveillance missions the P68 Observer 2 and P68C and their turbocharged siblings can provide an extremely effective observation or aerial works tool.

The certified camera hatch of these aircraft  allows the installation of most large format digital cameras and a wide array of gyro stabilized HD cameras. In addition the 10.5-hour endurance insures positioning and mission success when the work has to be done; not the following day when the weather conditions have changed. The helicopter like Plexiglas nose of the P68 Observer Series is unique and gives the pilot unmatched helicopter-like visibility, which can be an invaluable asset for the working pilot and bring a unique experience to the private owner.

The A-VIATOR; a certified larger twin turbine aircraft derived from the P68 Series. The aircraft is unpressurized so it’s still un-complicated and features an innovative Oxyfly brand system that allows continuous oxygen generation in the cabin through an innovative compressor, delivered via comfortable cannulas placed on the headsets. The Oxyfly allows the pilot and passengers to fly the aircraft at “pressurized” flight levels for
an indefinite time without the need of recharging the oxygen because there are no bottles.

The A-VIATOR features a state-of-the art three screen G950 Garmin glass cockpit and two RR model 250, 328 SHP turbines for some serious performance. The aircraft is very well suited for utility and short field GA and private use and where the need of a simple fast (200kt) yet roomy aircraft (up to 10 passengers + 1 pilot) is welcome.

In its surveillance configuration the A-VIATOR features two camera hatches for the installation of 360 degree maritime patrol radars or large format HD mapping cameras and a “long nose” for installation of a wide array gyrostabilized cameras.

Support is Paramount to Vulcanair

In terms of pricing our aircraft start at 728,000.00 Euros for a Garmin equipped P68C, up to 2.1 Million euros for the A-VIATOR turboprop Support is paramount to Vulcanair who support close to 500 P68 Aircraft all over the world. Our parts department is always keen to answer to the customer’s requests and reply in the shortest delays.

Please come and see us at Aero Friedrichshafen and talk to us. We would be happy for you to join our growing family of Vulcanair Aircraft Owners and Pilots.