What Makes the Junkers F 13 a First of its Kind?

The new Junkers F 13 is set to evoke memories around the globe. Discover the story, craftsmanship and passion behind the reproduction of the world’s first all-metal commercial aircraft... 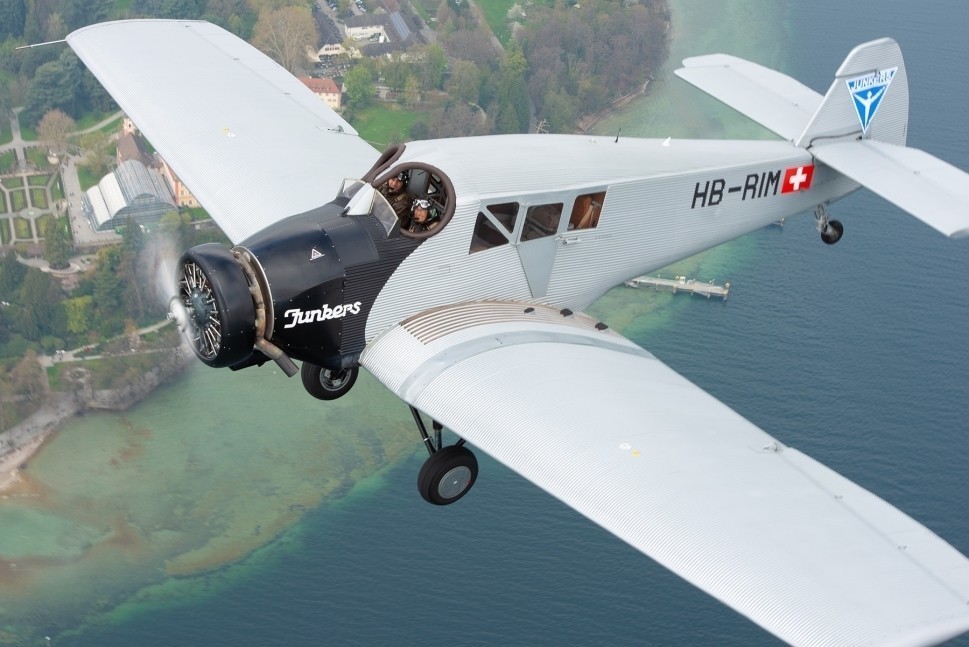 The new Junkers F 13 is set to evoke memories around the globe. Discover the story, craftsmanship and passion behind the reproduction of the world’s first all-metal commercial aircraft...
In 1919, as normality began to take hold of everyday life once again in Europe one thing had changed drastically...
Aeroplanes, invented before WW1 (and misused during said war), were now being used to the advantage of humanity as opposed to against it. This was the birth of civil air traffic! In an incredible feat, one young engineer brought the world’s first all-metal aircraft - the Junkers F 13 - from the drawing board to its maiden flight in a matter of only a few months.
Thus, under the guidance of Professor Hugo Junkers 33-year-old Otto Reuter revolutionised aircraft construction. 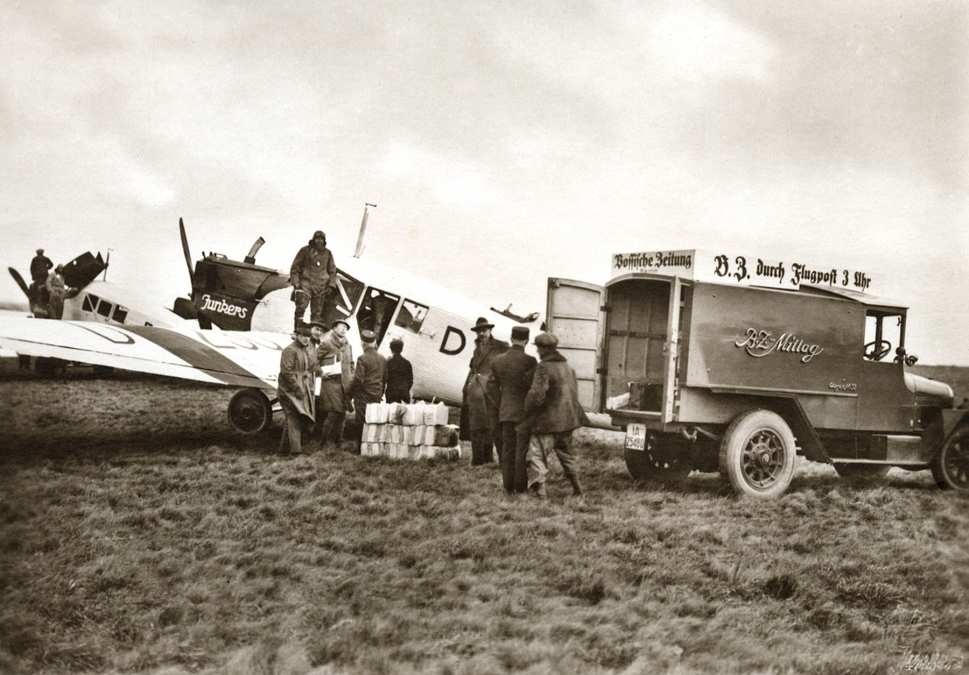 The six-seater Junkers F 13 is considered the precursor of modern commercial aircraft. While the competition were still operating aircraft made of wood with the fuselage and wings covered with cotton, the Junkers F 13 conquered the world of commercial aviation. As an ambassador for peace, the aircraft caused a sensation all over the world and opened up new fields of application.
Due to its all-metal construction, the aeroplane could now be operated in subtropical countries, whereas past models made with wood adhesives would not have withstood the weather.
The aircraft was also able to endure the often unpredictable weather in Central Europe as it did not need a protective hangar — advantages that were well highlighted in the original Junkers sales brochure. 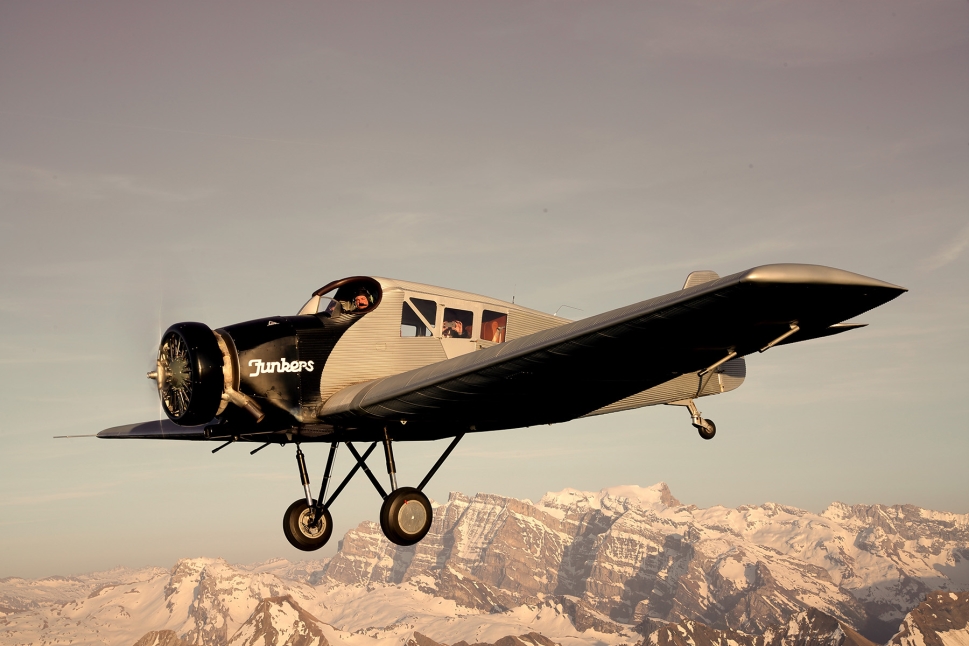 From an Idea to an Airworthy Airplane
Just a handful of the original Junkers F 13s still exist. These are all museum exhibits, and none of the 320 aircraft originally made are still airworthy. However, the year 2013 marked the resurrection of an aviation icon — and as a result you could be able to call one of these legendary aircraft your own in the near future!
It all started with a plan to build an airworthy replica of a Junkers F 13. Yet through that plan, the impossible was achieved — a reproduction aircraft was rolled out six years later.
Before that could happen, extensive research was needed - whether in museums, or talking to historians and gathering information from around the world in the most unusual places. Complete plans were nowhere to be found, but laser scans done on the few remaining museum pieces brought a breakthrough. 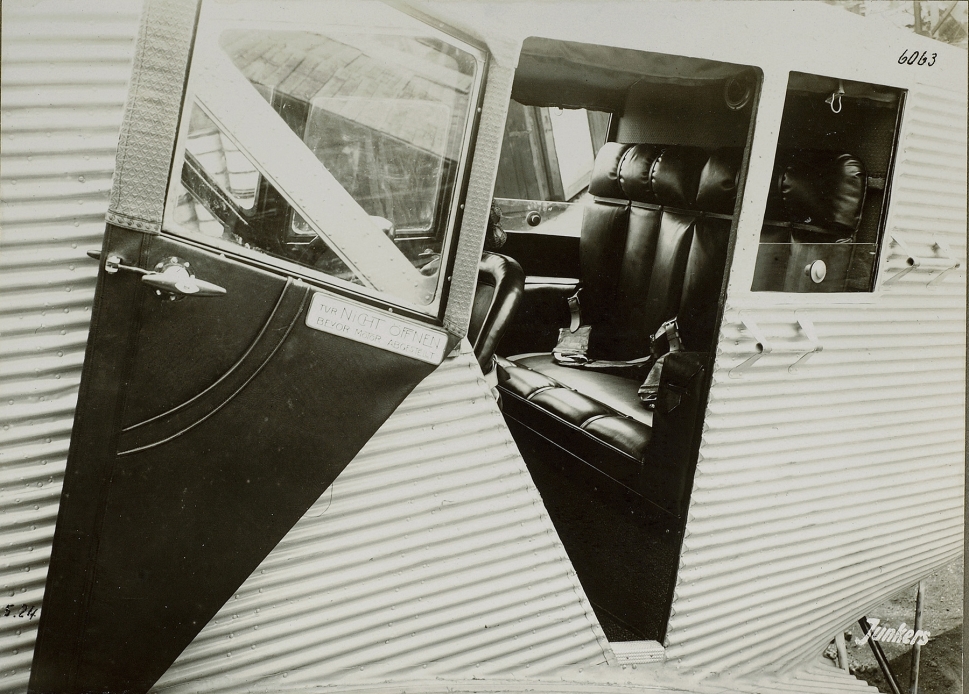 And therein lay the next challenge: the design team had to literally re-learn the old construction methods to be able to build the airplane anew…
Kaelin Aero Technologies GmbH, based in the German Black Forest, is a household name in the aviation industry. Dominik Kaelin and his team were able to reconstruct the corrugated sheet base material and thus overcome the next hurdle.
Yet, once built, the body shell manufactured by Kaelin needed to be fitted with an engine, propeller and controls - and certification had to be arranged. For this, Naef Flugmotoren AG in Dübendorf, Switzerland, was engaged.
After three years of research, development and construction, what many believed to be impossible came true in 2016: a Junkers F 13 actually took off again and has fascinated people ever since with its incomparable silhouette when up in the sky! 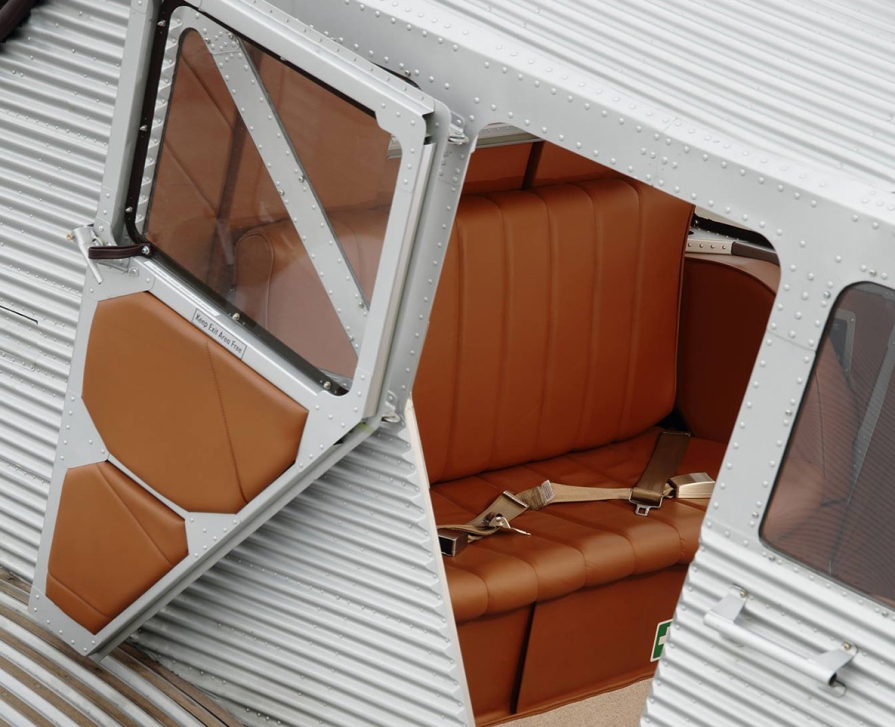 A Unique Story Gathers Pace
Yet that aeroplane was not intended to be an individual piece; more are already under construction. The Junkers F 13 is suitable for everyone, be it an airline company, a businessman or a private individual.
And, just like in the old days, the Junkers F 13 is suitable for everyday use given its good-natured flight characteristics and wide field of use.
In former times, the Grande Dame was called a ”private commercial aircraft“ — today she is your private travel aircraft, helping you slow down and return to another time. Nonetheless, you will be purchasing an aeroplane that is completely suitable for everyday use and which only makes a few concessions to the original for the sake of safety. 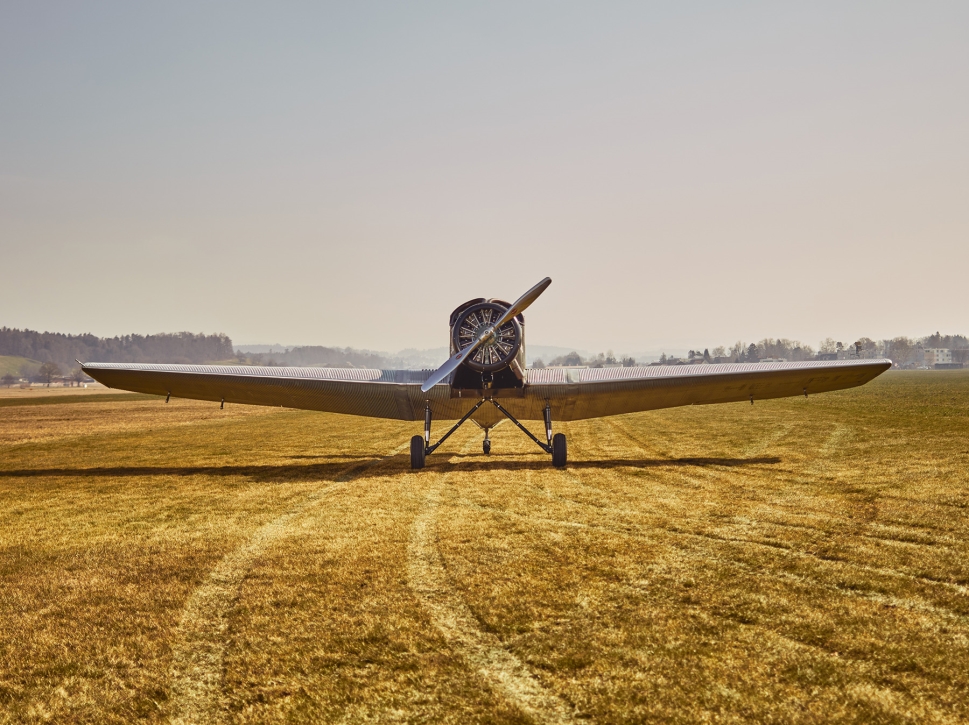 Today's Junkers F 13 aircraft is powered by a nine-cylinder radial engine, the “Wasp Junior” by Pratt & Whitney. This engine is still used today in many newer commercial aircraft and is characterized by its reliability, longevity and availability.
The landing gear, meanwhile, has been redesigned to allow the aircraft to land on paved runways and airports. 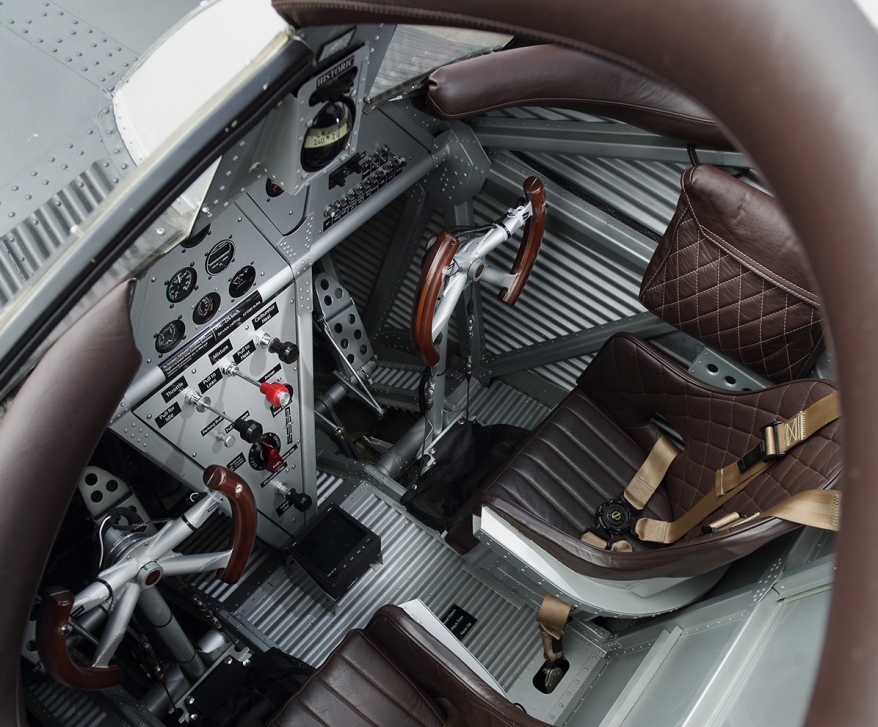 Modern instruments and radios have been installed in the cockpit to meet today’s safety standards. For your comfort in the cockpit and cabin, you can choose from exquisite materials and features, with which the new Junkers team will be happy to build your bespoke Junkers F 13.
During 2019, a Junkers F 13 will be touring Europe to celebrate the 100th anniversary of the world’s first all-metal commercial aeroplane. 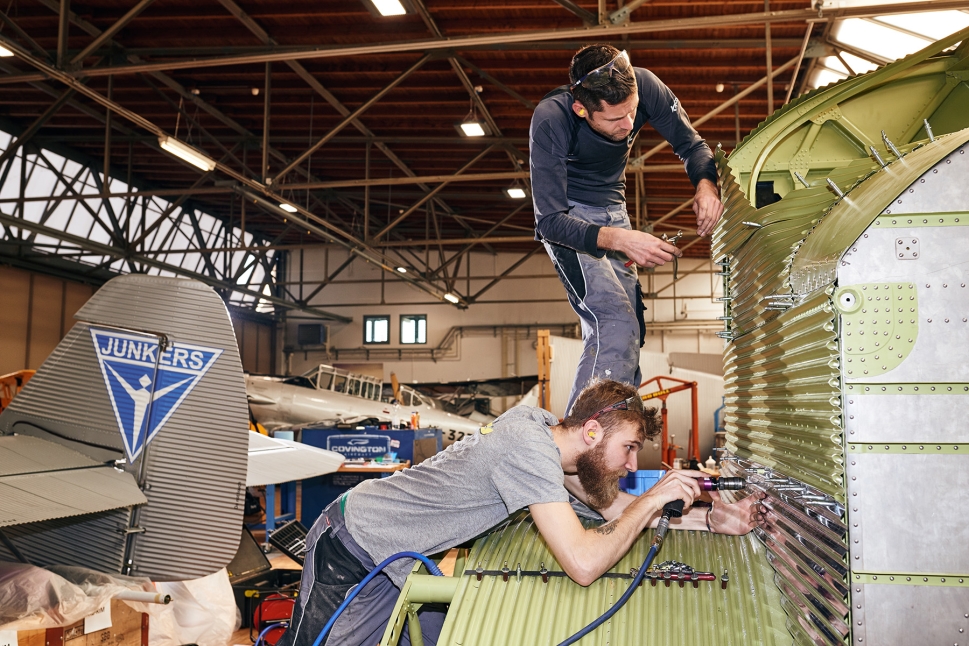 Fine Craftsmanship for Today’s Aviators
With its exclusive Junkers F 13 replica, Junkers Flugzeugwerke joins the ranks of the world’s most famous manufacturers of watches and automobiles.
It is a sight to behold: at the Kaelin Aero Technologies GmbH in the Black Forest a young team labours away with great enthusiasm to produce new components for the Junkers F 13.
The fascination for technology, coupled with the love for heritage is palpable in each of the 14 team members that are bringing the Junkers F 13 back to life. Here, a masterpiece in aircraft construction is being created entirely by hand, combining original drawings and new laser-drawn implementation plans.
Rivet by rivet, aviation history is being re-awakened, thanks to an almost lost, but reacquired craft.
And as the final assembly and the installation of the control systems, cockpit and landing gear take place in Dübendorf, Switzerland, everything fits together like the precision movement of a Swiss watch. 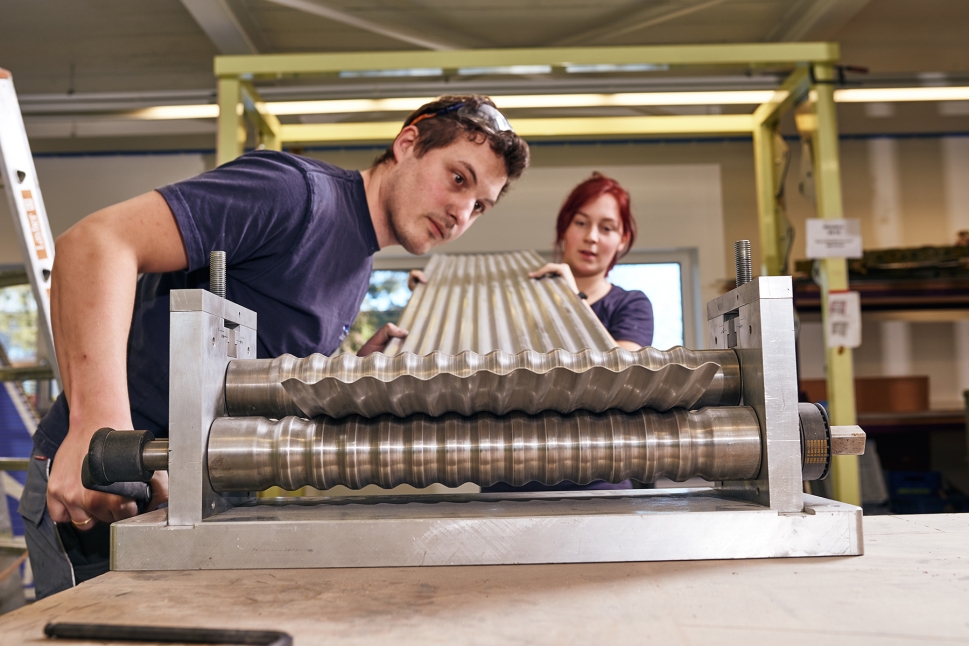 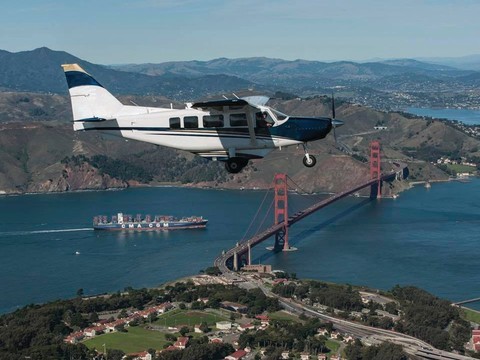 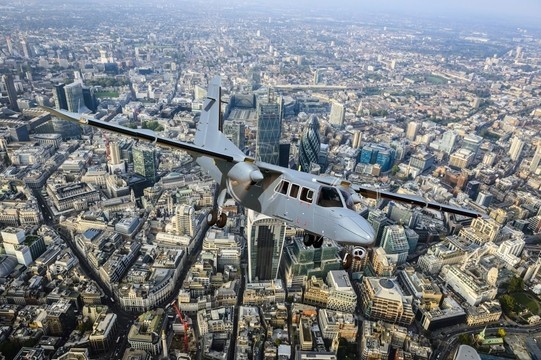 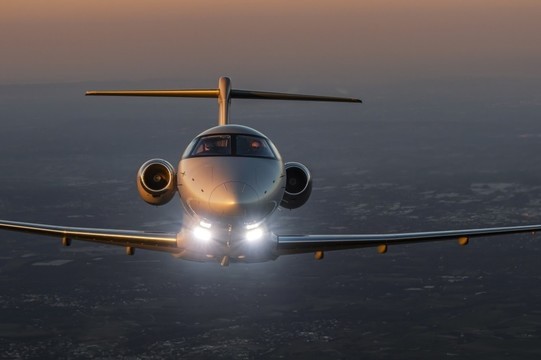