Fourteen crews from around the world took part in the 2018 Helicopter World Cup and The Heli UK Expo Challenge Cup. Who would emerge victorious? Here’s a summary of what happened… 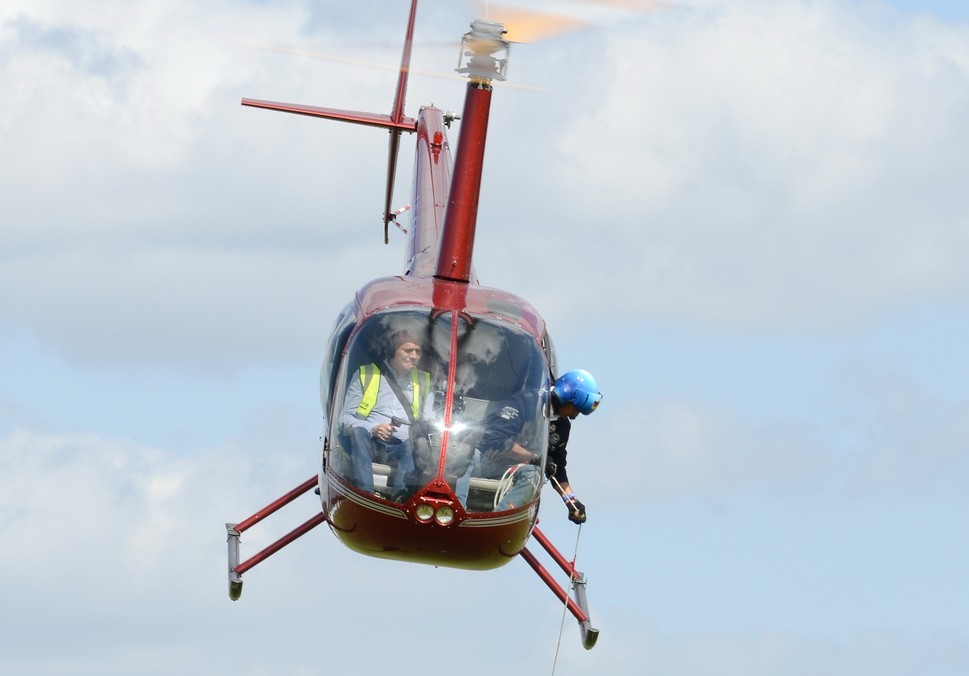 Fourteen crews from around the world took part in the 2018 Helicopter World Cup and The Heli UK Expo Challenge Cup. Here’s what happened…
Two days of action-packed flying took place at Heli UK Expo this year, and a record number of crews turned out to battle for all-important points for the Helicopter World Cup.
This year there were two classes with the World Cup (Master Class and General Class) and The Heli UK Expo Challenge Cup.
Day 1: General Class Slalom Event
First up was the slalom event. In slalom qualification the reigning World Cup champions Yury Yablokov and Konstantin Podoinitsyn recorded the fastest time of just 79.4 seconds with no penalty points, setting the bar for the entire event.
The General Class Slalom Quarter Finalsput British newcomers Alex Furness-Smith & Mat Reid against the best Polish crew, Marcin and Michal Szamborski with the Brits taking an early exit and the Poles romping home 2-0.
Competition favourites and first-time attendees at Heli UK Expo, Martin Eigner and Michael Schauff from Germany were drawn against Brits Stuart and Chris Rimmer, and the heat ended 2-0 in favour of our German guests.
TheGeneral Class Slalom Semi-Finalsaw the Szamborski brothers pitted against Eigner and Schauff. The Polish duo had upped their game since qualifying and flew with very few penalties, handing them a 2-0 win.
The other heat was Poland versus Poland. Maria Mus and the winner of the first ever Heli UK Expo Cup, Jakub "Kuba" Malec faced UK newcomers Bartosz Konczalski and Sebastian Komosa. With everyone flying the best of three, this was the first heat to go to three runs, with Maria and Kuba bagging victory.
Next up was the heat for Third and Fourth places - Eigner and Schauff versus Konczalski and Komosa. Both teams took the cautious route of flying steady, and the heat went to the best of three, with Eigner and Schauff emerging victorious.
TheGeneral Class Slalom Finalwas an all-Polish affair with the Szamborski brothers against Mus and Malec. The Szamborksi brothers shot off the line followed very closely by Mus and Malec only 0.3 seconds behind in the running time - but the Szamborski brothers flew penalty-free handing them the first leg.
With victory in site, the Szamborskis flew the course over 20 seconds faster securing them first place in the General Class Slalom. 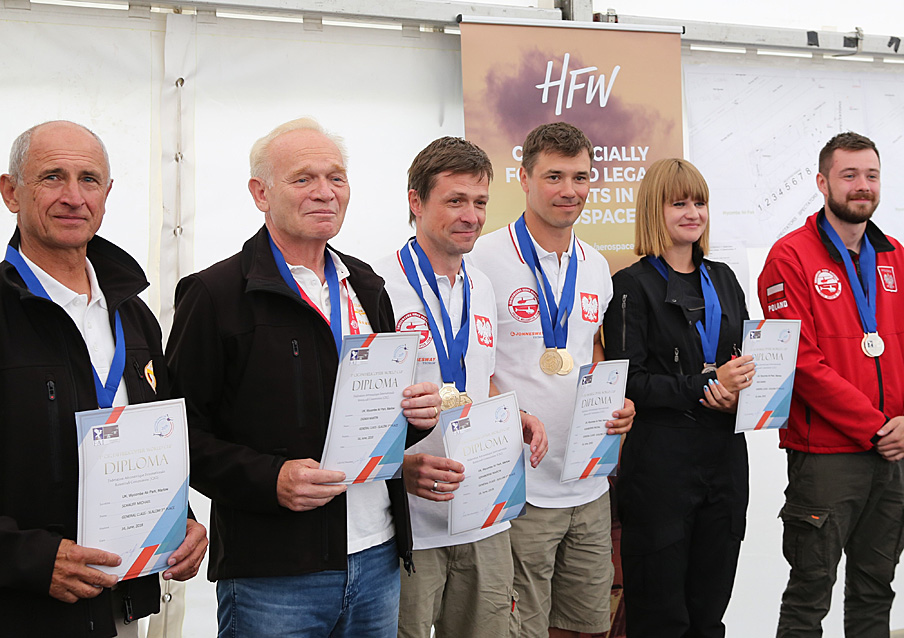 General Class Slalom Winners (Left to Right): Michael Schauff & Martin Eigner (Germany - bronze); Marcin & Michal Szamborski (Poland - gold); Maria Mus & Jakub Malec (Poland - silver)
Day 1: Master Class Slalom Event
Next up was the Master Class Slalom Quarter-Final. The qualifying had seen an all Russian opener with Maxim Sotnikov and Aleh Puajukas against Andrey Orekhov and Vadim Sazonov. With virtually fault free flying and between 80 and 82 seconds on the clock, Sotnikov and Puajukas won 2-1.
The second heat saw Maria Mus and Kuba Malec earning a slot in both classes with excellent qualifying times. They were drawn against Russian powerhouse crew Elena Zhuperina and Nikolay Rodionov. The Polish pair bagged the first run, but the Russians stepped up the pace and won 2-1, leaving an all-Russian field.
In the Master Class Slalom Semi-Final, Sotnikov and Puajukas faced Zhuperina and Rodinov. Sotnikov won the first run, then Zhuperina flew a 77.5 second run handing her the second. But victory eventually went to Sotnikov and Puajukas.
The second heat saw last year’s World Cup winners, Yury Yablokov and Konstantin Podoinitsyn, compete against Zhuperin and Burov, and the reigning champions flew the fastest time of the day (75.9 seconds) fault-free.
The battle for third place was now on, with Zhuperina and Rodionov against Zhuperin and Burov. It went to three runs with Zupherina credited for the fastest run of the day at 75 seconds, but victory went to Zhuperin and Burov.
The Master Class Slalom Final was between Yablokov and Podoinitsyn against Sotnikov and Puajukas. Yablokov made short work of the first run with yet another record speed of 73.8 seconds handing him run one. With nerves beginning to show, Sotnikov took the second run. All came down to the last run of the day when Yablokov held his nerve and claimed victory, capping a superb day of flying. 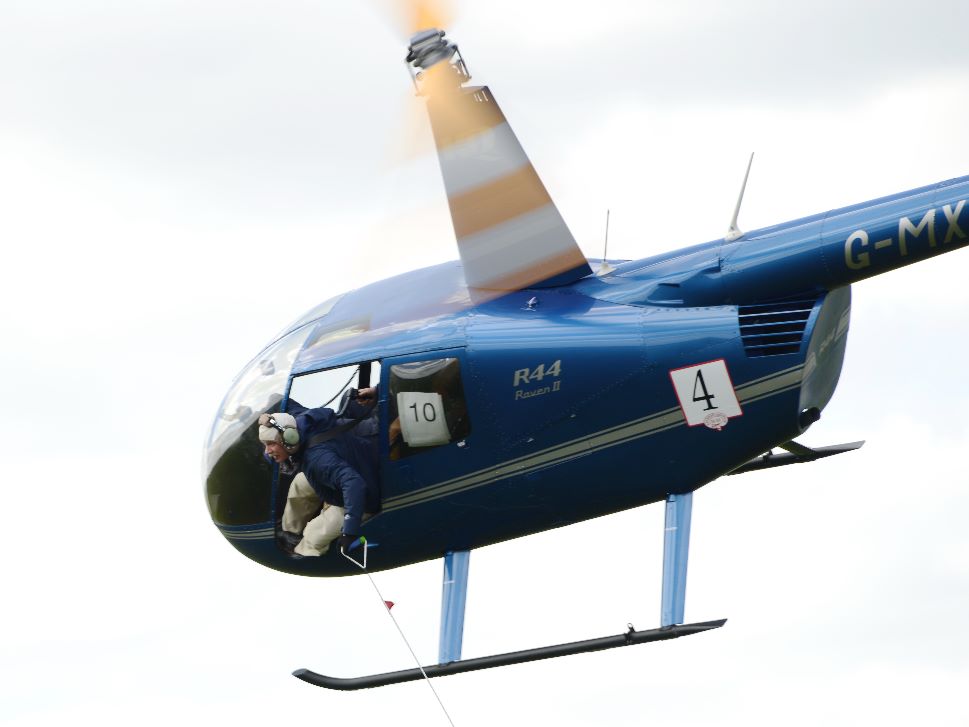 Day 2: General Class Fender Event
The fender event followed on Day 2, with crews going through qualifying rounds to secure their places in both classes.
In the General Class Fender Quarter Final, GB’s Paul Andrews and Andy McCulloch came up against the Szamborski brothers. With some steady flying, the Polish pair secured victory. The second Quarter Final was an all Polish affair and a repeat of the slalom with Maria Mus and Kuba Malec again facing Bartosz Konczalski and Sebastian Komosa. The result was also a repeat with best of three going to Mus and Malec.
The General Class Fender Semi-Finalproduced another all-Polish heat: Mus and Malec against the Szamborskis. In the other Semi-Final the Rimmer brothers were up against Eigner and Schauff. The Szamborskis and the Rimmers emerged victorious, with the third place play-off eventually being won by Mus and Malec.
With the General Class Fender Final proving to be a family affair, it was the Szamborskis who secured first place with some fast, penalty-free flying (their fastest run being 43.4 seconds).
Day 2: Master Class Fender Event
Next came the Master Class Fender Quarter-Finals. Yablokov and Podoinitsyn came up against Andrey Orehkov and Vadim Sazonov, while the other heat saw the only British team to appear (due to their excellent qualifying round): the Rimmers were against Elena Zhuperina and Nikolay Rodionov. The Russians took a 2-0 victory with no penalties on their score-sheet.
The Master Class Fender Semi-Finalpitted Russia against Russia with Yablokov and Podoinitsyn against Zhuperina and Rodionov. Zhuperina gained one penalty handing the first run to her opponent. Showing she meant business, however, Zhuperina stepped-up and flew a fault-free fender in a world-record 32 seconds to level the score. Not to be outdone Yablokov reasserted his authority and broke the new record replacing it with a 32 second fender to grab his place in the final.
The second Semi-Final was between Mus and Malec, and Sotnikov and Puajukas. It was clear Sotnikov wanted a place in the final, and the pair flew penalty-free to progress. The battle for third place was subsequently won by Zhuperina and Rodionov.
The Master Class Fender Final saw Yablokov and Podoinitsyn against Sotnikov and Puajukas. This was certainly a day for breaking records, and Sotnikov's first fender was flown in a new world-record time of 31.6 seconds, showing he had his sights set on the gold medal. He also won the second leg (but at a more sedate pace of 32.9 seconds) handing him and his crew that gold medal, as well as those all-important points! 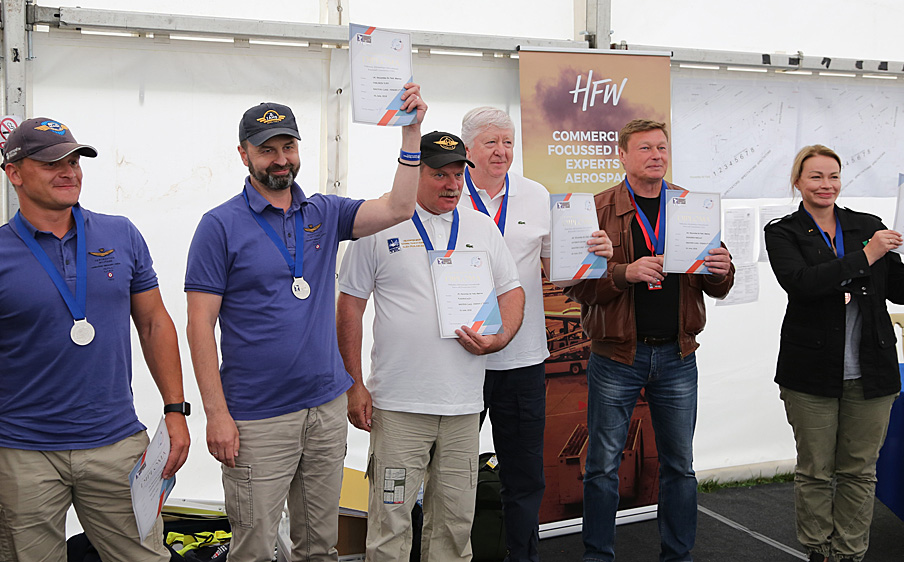 Master Class Fender Winners (Left to Right): Konstantin Podoinitsyn & Yury Yablokov (Russia - silver); Aleh Puajukas & Maxim Sotnikov (Russia - gold); Nikolay Rodionov & Elena Zhuperina (Russia - bronze)
Heli UK Expo Challenge Cup
The Heli UK Expo Challenge Cup was also flown within the event. This year it had a special twist in honour of the Germans who hadn't participated in UK competition before. The Final saw Great Britain versus Germany, with the winning crew, Martin Eigner and Michael Schauff, defeating the Rimmers. Third place, meanwhile, went to newbies Alex Furness-Smith and Mat Reid.
To sum the competition up, 2018 saw a record number of crews attending a truly world-class event that was filled with superb and highly-entertaining flying. We look forward to seeing you next year!