As eyes turn to Geneva, Switzerland for EBACE2018, we assess the current health of the European Business Aviation fleet today. Which make and model business jets and turboprops are popular here? Mike Chase analyses JETNET data. 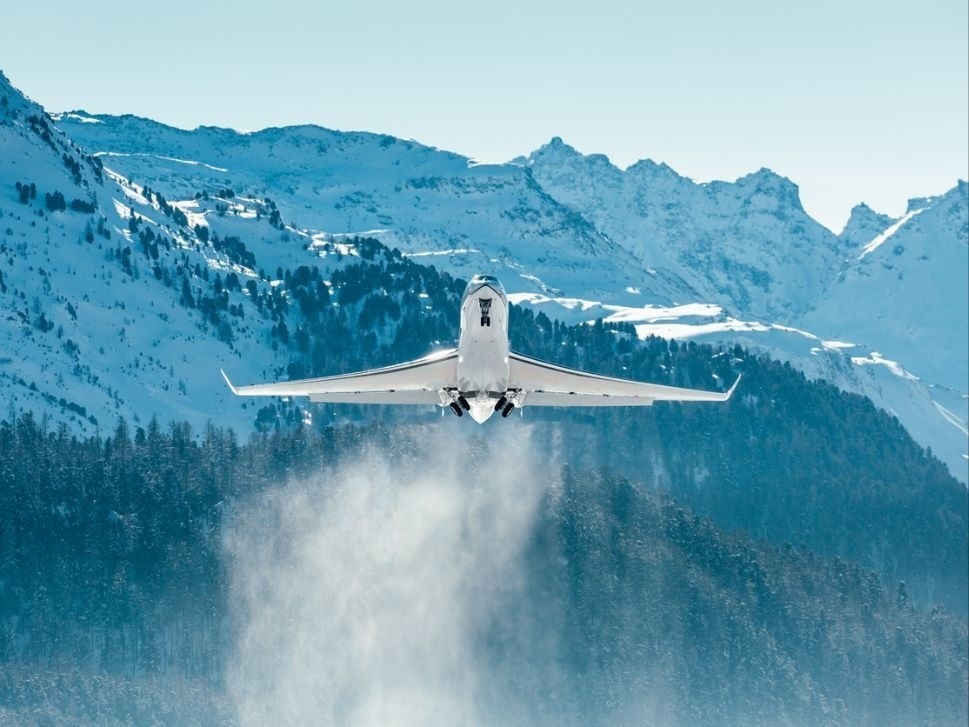 This month as eyes turn to Geneva, Switzerland for EBACE2018, Mike Chase assesses the health of the European Business Aviation fleet today…

It has been 61 years since, in 1957, the Treaties of Rome established the European Economic Community (EEC). Reviewing the ECC Winter 2018 report, Europe’s recovery from the financial crisis has been relatively slow and the overview title of this year’s ECC report is ‘Navigating Through Choppy Waters’.

Euro area recovery continues, but is surrounded by heightened uncertainty.

Europe’s economy appears to have so far weathered the recent deterioration in external conditions. The Euro-area and EU GDP are both estimated to have grown by 2.4% in 2017 (the fastest pace in a decade) and is forecast to expand by 2.3% in 2018 before easing back to 2.0% in 2019.

To mention just a few current concerns and challenges within Europe are exceptionally weak world trade, terror attacks in some Member States and neighboring countries, and the UK's vote to leave the EU and uncertain outcome of those negotiations. US policy uncertainty has raised the possibility of isolationist and protectionist policies that would hurt the global and European economy, should they be enacted. Recent news indicates that the trade war is starting.

At the end of March 2018, Europe accounted for 2,481 (12%) of the global wholly-owned in-operation business jet fleet, and 1,264 (9%) of the total business turboprop fleet (see Table A). That represents eight more business jets in Europe in 2018 compared to 2017, while business turboprops increased by 57 aircraft Year-over-Year.

The ADS-B Out 2020 mandate has created very interesting circumstances and conditions that our industry is working feverishly to navigate. However, this is not just a US issue; Australia was the first to require full ADS-B Out coverage, and Europe will require it on used aircraft by June 7, 2020. (June 8, 2016 saw Europe’s mandate for new aircraft come into effect).

The European fleet percentages of ADS-B Out compliant aircraft are 75% of business jets and 42% of business turboprops (per the JETNET Evolution database, 03/31/18). 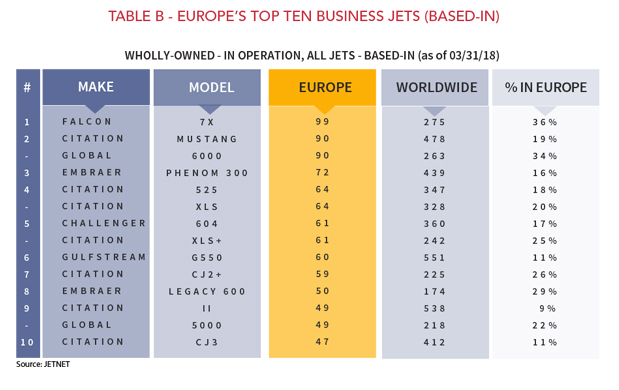 Included are the worldwide fleet totals for each model along with the European fleet percentage. The Falcon 7X (36%) and Bombardier Global 6000 (34%) have over one-third of their worldwide fleets based in Europe. 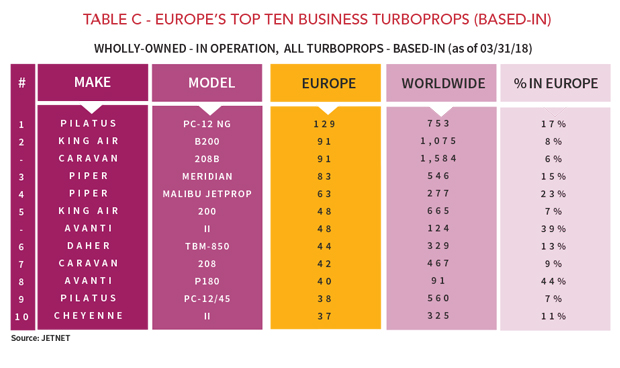 The Piaggio Avanti II (39%) and Avanti P180 (44%) turboprops have over one-third of their worldwide fleet based in Europe, meanwhile.

Textron (Cessna and Hawker) lead the manufacturers of business jets in operation in Europe, as depicted in Chart A, followed by Bombardier and Dassault Falcon. These ‘Top Three’ OEMs account for 83% of the 2,481 business jets in Europe. 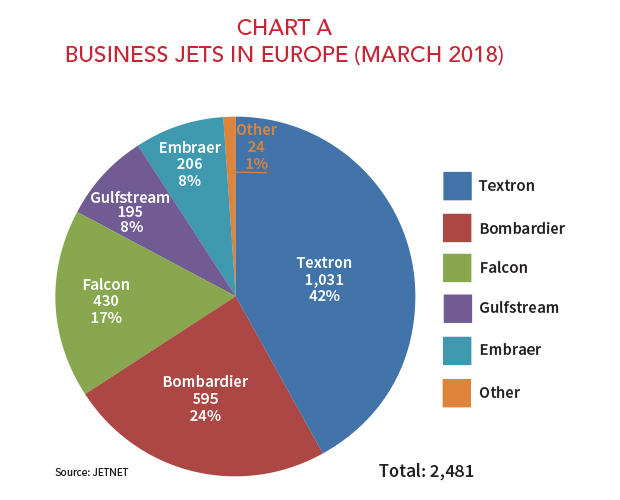 Of the Turboprop OEMs, again Textron leads the way in Europe with 41% of the total 1,264 units in operation. Piper and Pilatus also comprise the Top Three OEMs that hold a 73% share of the in operation business turboprops in Europe (see Chart B). 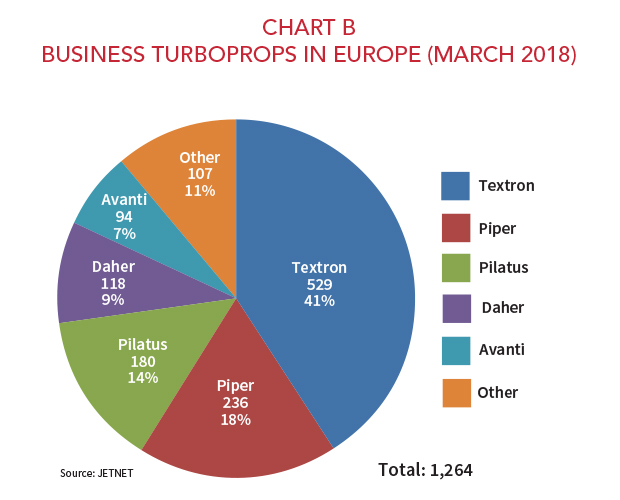 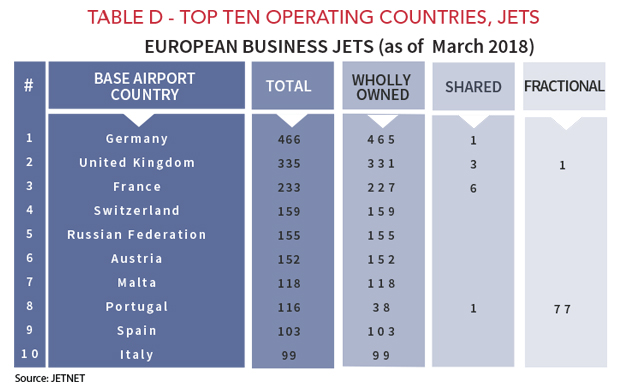 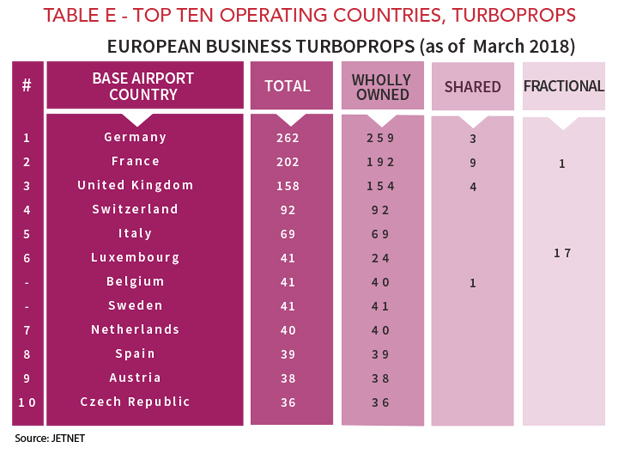 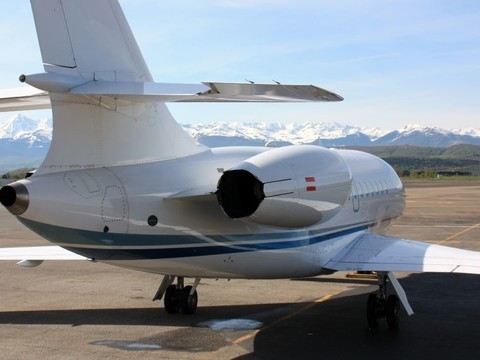