In this Helicopter Comparison, Mike Chase provides information on a pair of popular single-engine turbine helicopters. How does the Bell 505 Jet Ranger X compare against Robinson’s R66? Find out here…

In this Helicopter Comparison, Mike Chase provides information on a pair of popular single-engine turbine helicopters. How does the Bell 505 Jet Ranger X compare against Robinson’s R66 for sale? Find out here…

Corrected Data: Having investigated the hourly and variable cost comparison data published in this article on August 1, 2019, it was found that the costs presented were inaccurate. Corrected operating costs have since been incorporated and reveal that rather than being 20% more costly to operate, the Robinson R66 is in fact 20% less costly to operate on a ‘cost per mile’ and ‘hourly variable cost’ basis than the Bell 505. 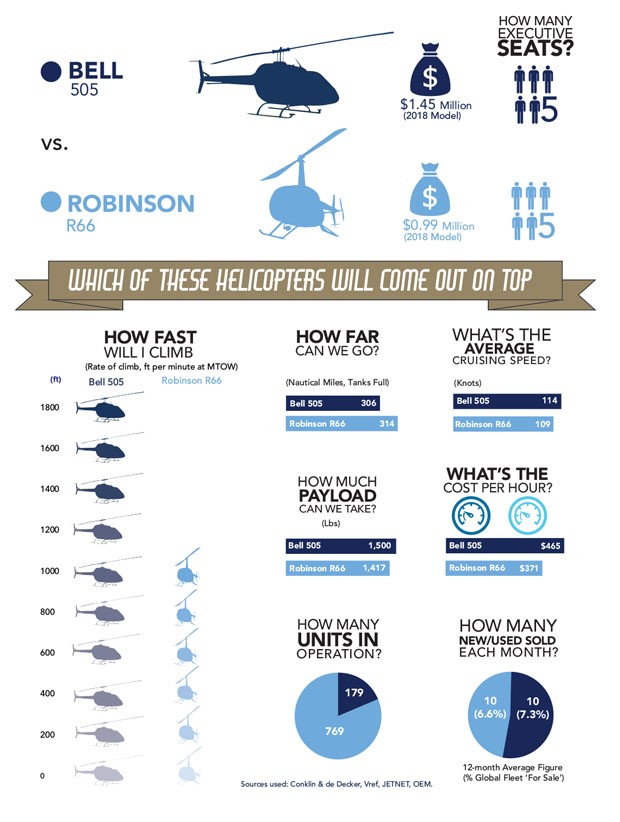 Over the following paragraphs, we’ll analyse the performance of the Bell 505 and the Robinson R66 and discuss some of the key productivity parameters (including payload, range, speed and cabin size), and current market values.
Bell 505
The Bell 505 Jet Ranger X has been in production since 2015. It is a short-range, light single-engine five-seat helicopter featuring a fully integrated Garmin G1000H glass flight deck and a Turbomeca Arrius 2R engine with dual-channel FADEC.
As of May 2019, there were nearly 200 Bell 505 helicopters in operation (and growing), almost all of which were wholly-owned. There have been three retirements from the fleet. North America had the largest Bell 505 fleet percentage (30%), followed by Asia (24%), Europe (20%) and South America (13%).
Robinson R66
By comparison, the R66 is Robinson's first turbine-engine model. FAA certification was received in 2010, and production continues today. The Robinson R66 is a five-seat helicopter with increased reserve power compared to its R44 stablemate, increased altitude performance, and a larger baggage compartment.
At the time of writing there were 769 Robinson R66s in operation, 755 of which were wholly owned, and a further 14 in shared ownership. There had also been 27 retirements from the R66 fleet. North America was home to the largest Robinson R66 fleet percentage (44%), followed by South America (21%) and Europe (19%). 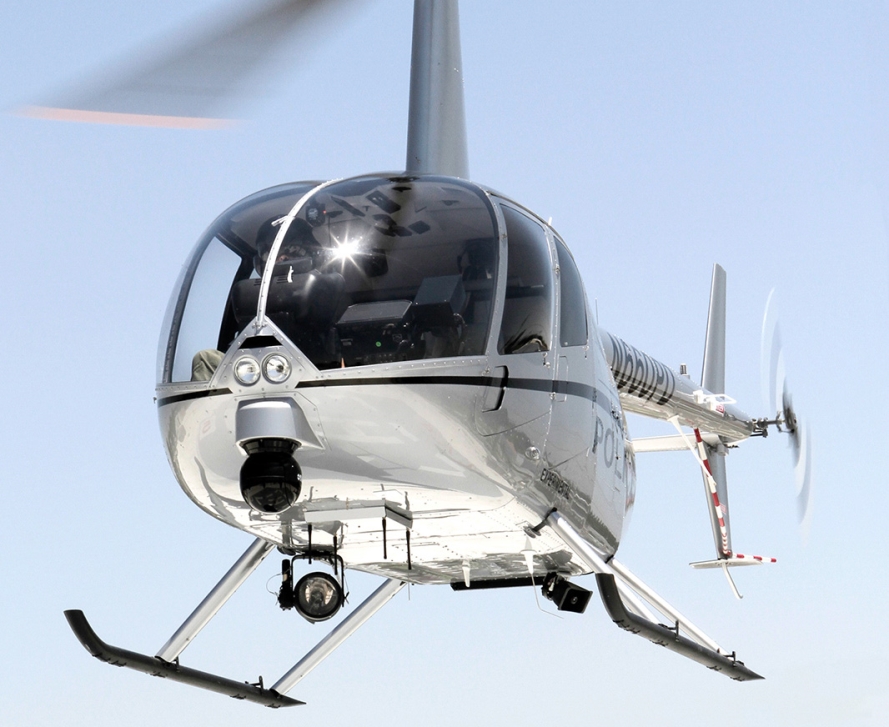 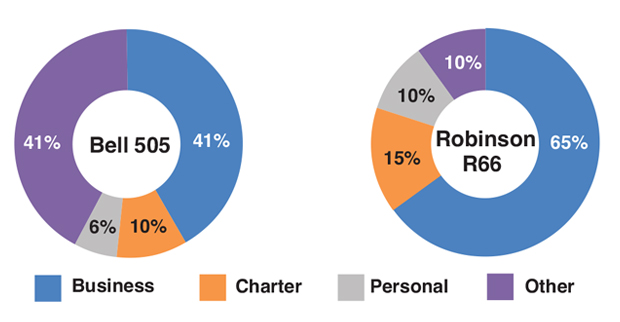 Payload & Range Comparison
The data contained in Table A is sourced from Conklin & de Decker and JETNET. Potential operators should particularly focus on payload capability as a key factor, and the data shows the Bell 505’s Available Payload with Maximum Fuel (at 826lbs) is less than that offered by the Robinson R66 (924lbs).
TABLE A – Payload & Range Comparison

Cabin Comparison
According to Conklin & de Decker, the Bell 505’s cabin volume measures 61cu.ft, which is more spacious than that of the Robinson R66 (50cu.ft). Chart B, depicting data from UPCAST JETBOOK, offers a cabin cross-section comparison, showing the Bell 505 provides marginally more cabin width (4.8ft vs 4.5ft) and height (4.41ft vs 4.33ft) than the Robinson R66.
The cabin of the Bell 505 is also slightly longer (7.17ft vs 6.67 ft), though not depicted in the chart. Both helicopters offer 18cu.ft external baggage space.
CHART B – Cabin Cross-Section Comparison 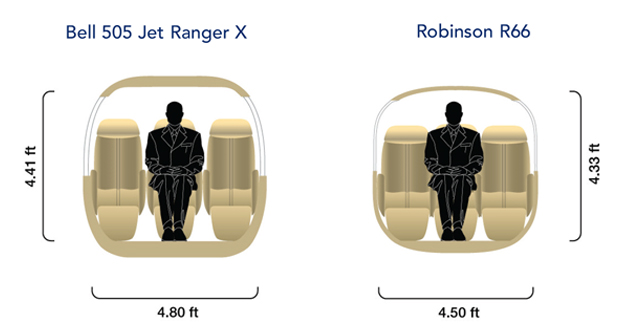 Powerplant Details
Bell’s 505 is powered by a single Turbomeca Arrius 2R engine offering a 459shp transmission rating. By comparison, the Robinson R66 is powered by a Rolls-Royce RR300 turbine engine with 240shp.
Cost Per Mile Comparison
Chart C details the ‘Cost per Mile’ for our comparative helicopters, per Conklin and de Decker data. It factors direct costs (no depreciation) with each aircraft flying a 200nm mission. The average US Jet A fuel cost used for August 2019 was $4.67 per gallon.
The Bell 505 shows a higher cost per nautical mile at $4.56, compared to $3.40 for the Robinson R66. That’s a difference of 25% in favor of the Robinson R66.
CHART C: Cost Per Mile Comparison

Aircraft Market Comparison
Table B contains the used price of a 2018 model for each helicopter (sourced from Vref Pricing Guide). The average speed, cabin volume and maximum payload values are from Conklin & de Decker/JETNET, while the number of helicopters in-operation and percentage ‘For Sale’ are as reported by JETNET.
The Bell 505 has 7.3% of its fleet currently ‘For Sale’, while the Robinson R66 has 6.6% ‘For Sale’. The average number of new/used transactions per month for both helicopters is ten.
TABLE B: Aircraft Market Comparison

Depreciation Schedule
Helicopters that are owned and operated by businesses are often depreciable for income tax purposes under the Modified Accelerated Cost Recovery System (MACRS). Under MACRS, taxpayers can accelerate the depreciation of assets by taking a greater percentage of the deductions during the first few years of the applicable recovery period (see Table C).
TABLE C: Part 91 & 135 MACRS Schecule 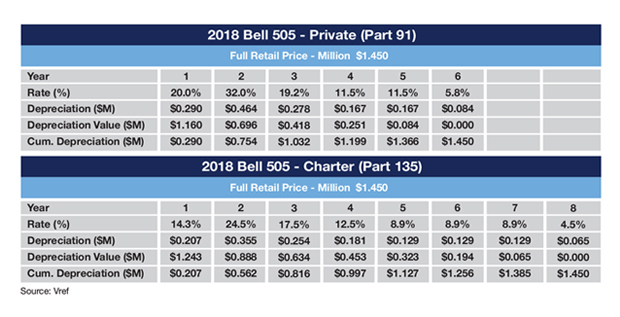 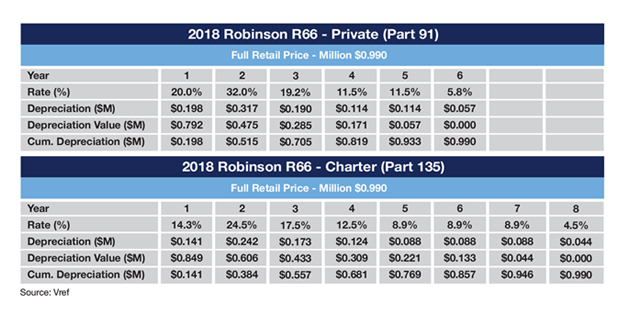 Asking Prices & Fleet for Sale
The current used helicopter market for the Bell 505 shows a total of 13 helicopters for sale with 11 displaying an asking price ranging from $1.36m to $1.65m. We also reviewed the 51 used Robinson R66 helicopters for sale which displayed 43 asking prices ranging from $0.485k to $1.25m.
While each serial number is unique, the Airframe (AFTT) hours and age/condition will cause great variations in price. Of course, the final negotiated price remains to be decided between the seller and buyer before the sale of an aircraft is completed.
Productivity Comparison
The points in Chart E are centered on the same helicopters. Pricing used in the vertical axis is as published in the Vref Pricing Guide for model year 2018. The productivity index requires further discussion in that the factors used can be somewhat arbitrary. Productivity can be defined (and it is here) as the multiple of three factors:
Others may choose different parameters, but serious helicopter buyers are usually impressed with Price, Range, Speed and Cabin Size. After consideration of the Price, Range, Speed and Cabin Size, we can conclude the following:
CHART E – Productivity Comparison 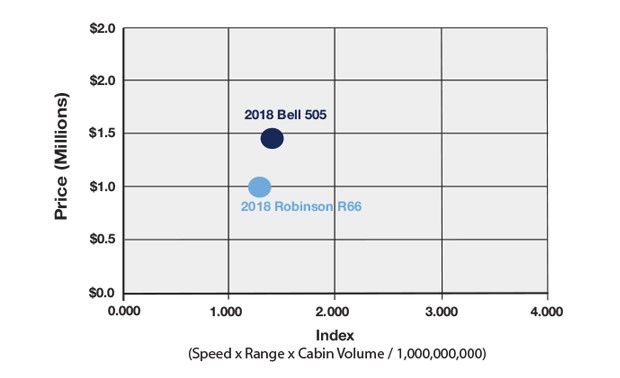 In Summary…
Currently, both of the featured helicopters average 10 units sold per month (new and pre-owned) and are clearly popular models on the turbine helicopters for sale market. Operators considering the purchase of a single-engine turbine helicopter should weigh up their mission requirements precisely when choosing the best aircraft for them.
Within the preceding paragraphs we have touched upon several of the attributes that helicopter operators value. However, buyers should be aware that there are other qualities that might factor in a buying decision too.
Our expectations are that the Bell 505 jet ranger x helicopter and Robinson R66 will continue to do well on the new/used helicopter market for the foreseeable future.