He made his bed in Business Aviation, and now he can lie in it... literally! 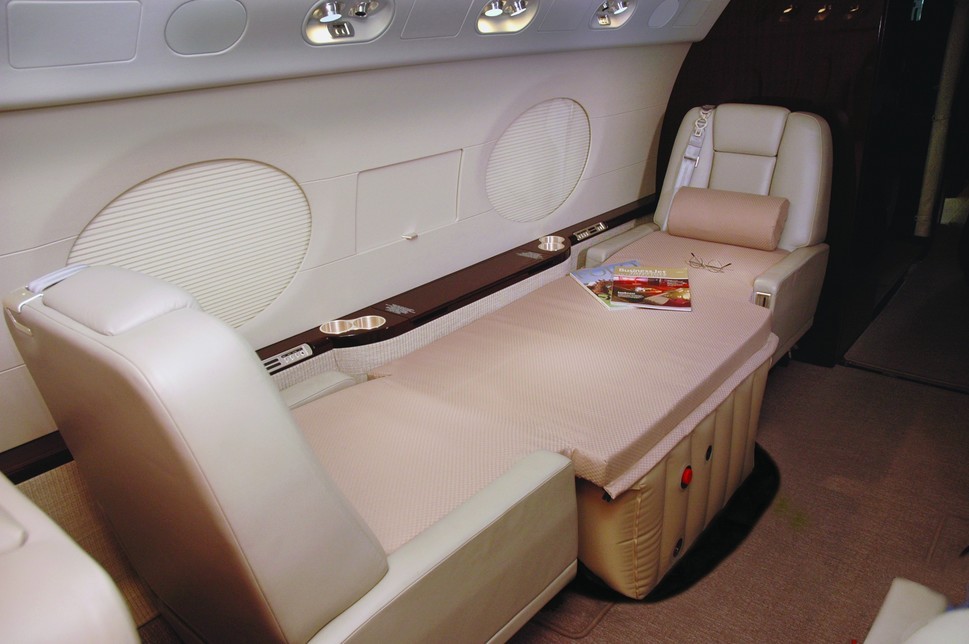 Rani Singh introduces us to Gary Bosstick, a man who started out with a love for aviation, built his first business using that passion as a vital tool, and then built a second business providing a necessary source of comfort to the Business Aviation industry…

This is the story of an entrepreneur who grew up fascinated by fast, noisy vehicles. As a teenager Gary Bosstick loved cars, motorcycles, boats and - of course - airplanes! He served in the US Navy following high school, but since airplanes had always been of interest to him, after his discharge learning to fly came high on the list of priorities – a priority he was able to meet using his GI benefits to pay for his private pilot’s certificate.

After leaving the Navy, a friend persuaded Gary to get a real estate license so as to move into that industry. People with a service background tend to be successful in real estate due to their self-discipline and organizational ability, and Gary was no exception.

Based in San Diego, California since 1963, he linked up with financial partners and began building various projects, from small retail strip centers, to industrial buildings and office buildings. And of course private aviation soon became indispensible to his business. He and his business partner soon bought a new Cessna Turbo 210.

Gary sold some buildings and was able to invest in a second business (although in real estate development, he explains, each new project is a new business). This new business was based in Tampa/St. Petersburg, Florida, and because by now Gary had Business Aviation in his corporate structure, he could fly to Florida with more ease.

“The Florida-based company, Rutenberg Realty, was started by my brother-in-law, John Nestor, and currently has around 2,000 agents and is one of the larger Residential Brokerages in the country,” Gary explains. “Around 2006 I started selling various properties and used some of the proceeds to buy out John's founding partner.”

As business grew over the years, so did Gary’s use of aircraft. “My progress through various aircraft is as follows,” he recalls. “The Cessna T210, Beech B36TC, Cessna 421C, Mitsubishi Marquise, Cessna Citation CJ1, a 2005 CJ3, and the current 2008 CJ3. Having a jet made more sense later.”

“I recall one day I had meetings in El Paso, Texas; Colorado Springs, Colorado; Salt Lake City, Utah; and Fresno, California and needed to be home that evening. Things like that just can't be done using airlines.

“When doing work in Salt Lake, Utah, I could go there from San Diego, meet people, inspect building progress and be home in time for dinner. Without the aircraft I could not compete in those markets due to the distance.”

Gary’s construction business was doing well, and he was using his passion for flying to help the business from different aspects. As you can imagine, he spends a lot of time in the air, which led to the concept for an additional business that has since proven to be a runaway success too—a special kind of light and portable inflatable bed called JetBed (www.jet-bed.com) that fits neatly into jets, whether big or small.

Gary highlights “the beds are more comfortable than any conventional aircraft versions, taking only about one minute to install or remove. Without the jet I would never have conceived of the idea to start JetBed.

“The stimulus to invent the JetBed was simply to make flying comfortable for my wife, who has put up with my love of flying all these years! The inspiration came from the desire to make a product so my wife would be able to sleep comfortably during our trips. My wife is asleep about 15 minutes after takeoff, and I wake her up during the landing approach. She thinks the California-Florida trip takes about a half-hour!”

As a matter of fact, JetBed has succeeded far beyond Gary’s expectations. The way he got the business off the ground is a salute to the drive of a determined entrepreneur. “I found a contract manufacturer in Corona, California that seemed to have the ability to make what I had in mind. I convinced them to meet me at Flo’s Airport Cafe at Corona Airport for lunch and flew my CJ3 up to meet them.

“Over lunch we signed a non-disclosure agreement on a napkin and started to discuss the idea. I asked for an estimate and was told it would take a few weeks to get a price. I asked for a quick, rough price along with an idea of the amount of time it might take to create.”

Gary didn’t want to wait, so he made a cheque out for twice the amount of the quote so he could get going quickly. The company realised that Gary meant business and produced the prototype immediately. But how did he build his market?

“Getting OEMs on board started when I first called people at Cessna who I’d gotten to know as a Cessna owner,” he elaborates. “I asked them for a meeting to look at an idea I was working on. I expect they agreed to the meeting just because they wanted to be nice to a repeat customer and planned on giving me about a half hour. After a few minutes they asked if I would mind if they showed the JetBed prototype to a ‘couple more people’.

“The ‘couple more people’ kept growing until after lunch Jack Pelton, then-president of Cessna, showed up and was enthusiastic about the JetBed – and we agreed that Cessna would help me offer JetBed on their aircraft,” smiles Gary.

And the product is popular; customer demand and word-of-mouth for JetBed are the driving forces in most cases. Fortunately, there was no problem getting the JetBed certified for Cessna or any of the other jets that use it. “JetBed is ‘loose equipment’, like a pillow,” he explains. “Certification does not apply, but we build JetBed to even more rigid standards than would apply in any case.”

And while some would question the need for a bed in a smaller jet, Gary answers them patiently. “Many of the aircraft using JetBeds have long-range; some 7,000 miles or more. But even many light jets are able to fly non-stop for at least five hours – and five hours in the middle of the night is a long time not to be able to sleep comfortably – my CJ3 for example easily flies direct from California to Florida in about 4:45 hours and my wife sleeps the whole way.

“Large jet clients love my JetBed because prior to JetBed, there were no products even remotely as comfortable and easy to use,” Gary summarizes, adding, “Once a user tries a JetBed they insist on having them.”