The reason why BizAv remains indispensable to one oil company 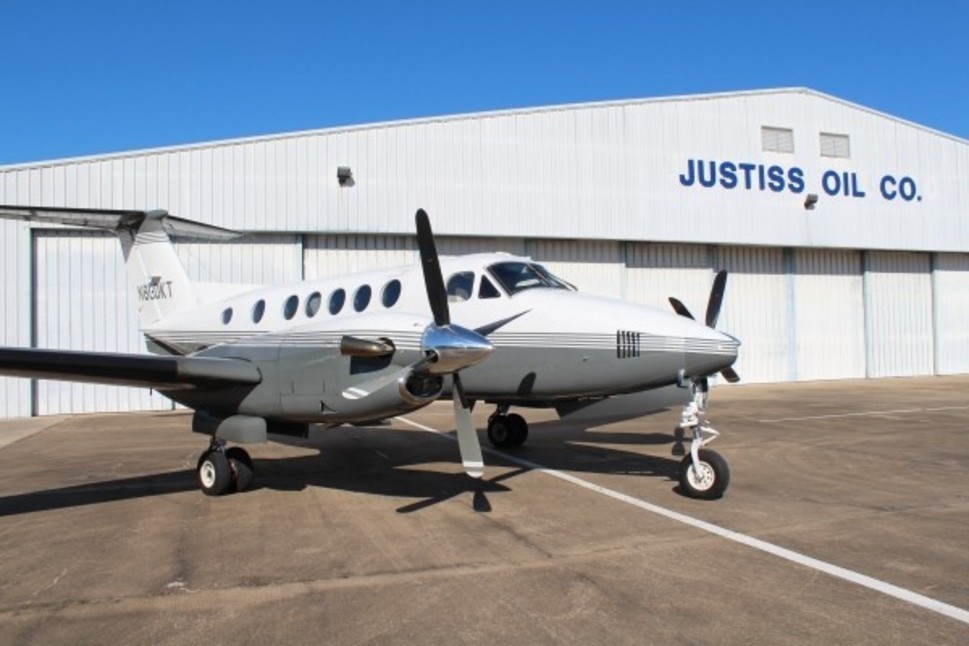 With all the stories of oil companies selling their business aircraft during bruising economic times , Patrick Newcomb, Head of Aviation, Justiss Oil outlines why his company can’t do without their trusty King Air B200.

Justiss Oil Head of Aviation Patrick Newcomb loves his job. “You wouldn’t know by looking at it now, but the Oil and Gas Industry can be a rewarding career option for a corporate pilot,” he explains from the company’s base in Jena, Louisiana.

“Companies in this industry rely heavily on Business Aviation to transport their key decision-makers to important meetings, deliver critical parts, and move vital employees to and from job sites.”

A privately owned, family-run drilling, exploration, production and well-servicing company, Justiss Oil (www.justissoil.com) has operated in Southern US since 1946. “Business Aviation ensures our personnel remain highly productive instead of wasting (in some cases) an entire day drudging through the chaos at the airlines.”

While in the current climate many oil and gas companies have traded-in their airplanes and laid-off their flight department personnel, Justiss Oil Company has opted to take a different route.

“We’ve contracted with a Part 135 company to utilize the King Air B200 for on-demand charter flights to reduce, and perhaps eliminate, our flight department’s overhead,” Patrick shares.

“This comes as no surprise to anyone who knows Justiss Oil. We have weathered some of the worst storms in our industry since 1946. It is this same ingenuity that has kept our company strong all these years.”

Founded by James Fowler Justiss, Sr. primarily as a drilling and production company, today the group has diversified into exploration, manufacturing and pipeline operations, and has owned its own airplane since the mid-1960s, starting out with a Baron, later trading it for a Citation, and today operating the King Air B200.

Patrick calls the King Air a necessity for the business. “We can attach a certain amount of our success to having the versatility of a corporate aircraft. Though today we mainly operate in the mid-south, we have done business in many remote areas including Venezuela, making transportation a critical aspect of our business model.”

A Day in the Life…

Today, a typical trip takes the King Air to Houston, according to Patrick. “We go there a lot for business meetings and take engineers, geologists and executives. They meet with industrialists and other exploration companies.”

Houston is about an hour from Jena flying privately, “maybe a little bit less, depending on the winds, but to actually drive there would take around five hours and probably half a day via the airlines, what with security.”

Nevertheless, Patrick’s flight trip planning begins the night before a scheduled journey, booking reservations for the airport FBO, fuel, hire vehicles and other services that might be required. “I’ll look at weather, I’ll file a flight plan with traffic control, and then next morning we’re good to go.”

“I usually arrive at the airport an hour before departure time where I do pre-flight inspections, make sure sodas, coffee and snacks are available before pulling the aircraft out and into position. Then our folks arrive to board the airplane and we’ll take off.”

Flying to Houston Hobby, an outlying airport from Houston, Patrick notes “It’s much more convenient for our passengers. When we arrive there’s usually a rental car on the ramp as the airplane pulls up. On occasion, I drive our passengers to their meetings.”

While the passengers are in meetings or conducting their business, Patrick will be checking weather, filing flight plans, overseeing last-minute catering needs, checking for delays, and prepping the airplane for its return flight ready for a prompt departure when they return to the airport.

Business Aviation truly provides a seamless door-to-door service for the employees of Justiss Oil. Typically the King Air carries around three to four passengers on an average trip.

The Powerful Case for BizAv

Patrick has been with Justiss Oil since 2014 but has a long aviation heritage. “My father was a pilot during the Vietnam War, which is probably where my love of airplanes came from,” he shares. “I began my flying career in the Navy as a Naval Air Crewman and Combat Rescue Swimmer. I also served in Desert Shield/Storm and Operations Deny Flight over Bosnia and Herzegovina.

“After leaving the military, I put myself through flight school and college and have flown for different operations that include flight schools, engineering companies and airlines.”

He derives a great deal of pride from flying for Justiss Oil as he observes the impact his department can have on the company’s operation.

“On one occasion, one of our rigs broke down in southern Texas and the required part was unavailable anywhere close to that location,” he recalls.

“We dispatched our King Air to Las Vegas where a parts distributor happened to have the exact part needed on their shelf. In a matter of hours, that rig was operational again, saving the company tens-of-thousands of dollars of down time, and making for one happy client.

“That serves as just one of many success stories that makes a powerful case for Justiss Oil’s flight department, and is why we still stand tall – albeit perhaps a little more bruised today – among the greats in our industry.”