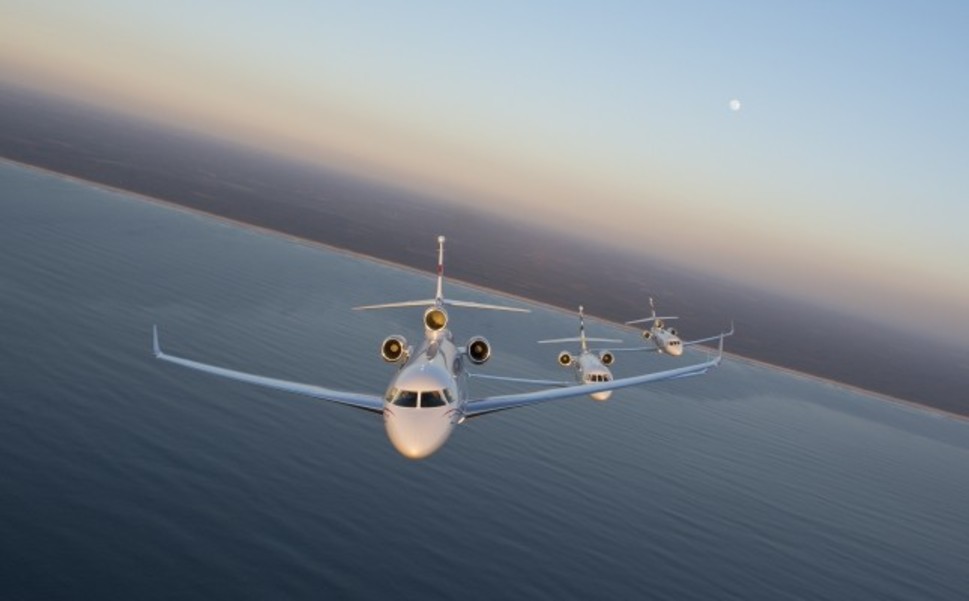 Dassault had been a world technology leader ever since its post-war revival, but a new era was dawning in the early 1990s. Rod Simpson concludes his Dassault company profile…

The CATIA computer-aided design and manufacturing (CAD/CAM) system, developed in the 1980s, suddenly made it much easier for Dassault to design new aircraft. This three-dimension modelling tool, which allows engineers to create complicated structures, became a world-leading technology product in its own right, adopted by many other organizations.

By 1990, Dassault was building Mirage 2000s for many customers and was developing the brand new Rafale fighter, involving exciting new systems and concepts. The company was also heading into space with engineering for the Hermes spaceplane, which would be launched using an Ariane rocket. All this required an increasingly sophisticated design organization - which had been established in 1981 as Dassault Systèmes.

By the turn of the century, Dassault’s high-end computer systems would be grappling with modelling supersonic and hypersonic aircraft designs, calculating weapons system design and integration, and assessing new materials particularly related to stealth technology.

Above all, Dassault had always insisted on designing and manufacturing the flight control systems for all its aircraft. Its development of fly-by-wire (FBW) systems started in the 1960s at the time it was doing its VTOL fighter projects, and full-authority FBW controls were incorporated into the Mirage 2000 and 4000 and the Rafale.

The teams developing these controls also worked on the Falcon series and, while the early Falcons did not have FBW, they benefited from the integration skills of the Dassault technical team.

Then there was the civil aircraft family that had started with the Falcon 20 (nee’ Mystere XX). This activity was joined in 1971 by Dassault’s only venture into the commercial market with the twin-engined turboprop Hirondelle and the limited production Mercure airliner. These two aircraft were not commercially profitable, but they did expand the company’s technological skills.

The Birth of EASy

More successful was the business aircraft line and, by 1990, Dassault’s range of models had grown to include the three-engined Falcon 50 (based on the Falcon 20) and the Falcon 10 "Mini-Falcon". These were soon to be joined by a new and larger aircraft at the top of the line, namely the Falcon 900, which made its first flight on September 21, 1984 and was well into series production by the turn of the decade. 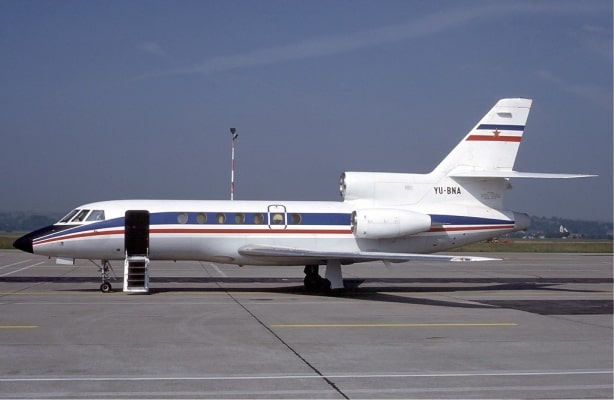 The Falcon 900 is still in production and has brought wide-body comfort to the Falcon line. It had a flat floor and a very large rear baggage room that could be accessed from the cabin or externally. It pioneered new materials with 18% of its structural parts made from composites, and it had an entirely new digital avionics package with an electronic EFIS and brand new symbology. This aircraft was a major advance in the business jet world. Dassault’s focus on how to make the aircraft more pilot-friendly would continue with successive Falcon 900 models. 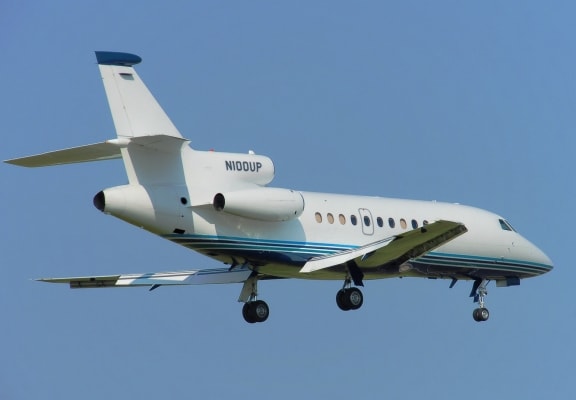 In 1995, the company launched a research program, aimed at giving the crew better situational awareness and facilitating better inter-pilot coordination so as to improve safety by reducing workload. The result was the Enhanced Avionics System (known as EASy), which used the Honeywell Primus Epic integrated avionics package. This addressed the problem of the crew handling an increasing volume of data - which could result in confusion in stress situations.

The principle was that primary information should be limited to what the crew really needed to know - with abnormal situations being flagged up when necessary. Four large screens could be configured to present data in the form most comfortable for the pilots, and the main interface with the EASy flightdeck was through cursor control devices. EASy would become the standard for all Dassault business jets and would move on through continuous upgrades.

At the 1989 Paris Air Show, Dassault unveiled its successor to the highly popular Falcon 20. The market had moved on and the wide cabin of the Falcon 900 had such customer appeal that Dassault used the same cross section and flat floor approach for its new Falcon 2000. It was the result of an intense design process to optimize the aircraft’s aerodynamics and to achieve the lowest possible fuel consumption and maximum range. 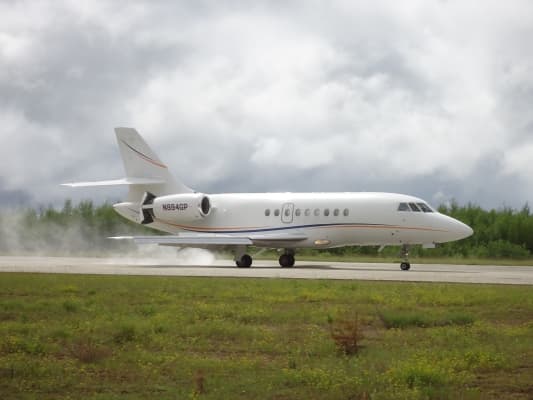 Similar to the Falcon 900, the Model 2000 adopted “area ruling” for the fuselage and used a developed version of the Falcon 900s double-swept super critical wing. It had a glass cockpit, and the engines were managed by dual redundant Full Authority Digital Control (FADEC) systems.

This 3,000nm twin-turbofan aircraft introduced CAT III(a) autoland capability coupled to a HUD (Head-Up-Display), allowing landings down to a ceiling height of 50ft and visibility of 700 feet.

In the cabin, Dassault provided a spacious, bright and very quiet environment and controlled the quality of finish through its own completion center at Little Rock, Arkansas. This manufacturing decision also allowed the company to develop new materials and furnishing concepts for all its Falcon models.

Since the first production Falcon 2000 entered service in 1995, the aircraft has been progressively improved. The current Falcon 2000LXS has winglets, its range has risen from the original 3,000nm to 4,000nm with a 22% gross weight increase to 42,800 lbs, and more powerful PW308C engines have given it a Mach 0.862 maximum cruising speed.

Designers of the Falcon 2000 had a target of reducing operating costs by 30% compared with comparable models, largely achieved by the efficiency of the CFE738 engines. The use of CATIA software also allowed Dassault to partner with Alenia (manufacturer of the rear fuselage) by networking the computerized systems and enabling development and production costs to be minimized.

Another key goal was to make the aircraft easily maintainable by giving mechanics easy access to components that are logically grouped, and by using digital inspection aids and a computer-aided maintenance management system. This philosophy lives on at Dassault in 2016 at the St. Cloud Research and Development Center in Paris.

Today, airframe designers don goggles to use virtual reality modelling that allows them to position internal components for maximum ease of maintenance. It allows the designer to test whether, for instance, an actuator can be removed from the aircraft without being obstructed by a piece of airframe structure.

With the Falcon 900 and Falcon 2000 well established, the next target for Dassault was a ultra-long range 5,700nm new generation business jet. As John Rosanvallon, President and CEO of Dassault Falcon Jet explained “we analyzed all major city pairs and, out of Paris, for instance, 5,700 nautical miles delivers the major US West Coast cities going west or Tokyo going east”.

The Falcon 7X cabin had the same width and height as the Falcon 900 but was about 8ft longer and embodied an important Dassault concept known as “design-to-build”, which aimed at reducing airframe parts counts and reducing manufacturing labor hours. The three-engined Falcon 7X had an entirely new wing employing a high-transonic form with a substantial improvement in lift-to-drag ratio compared with the existing Falcon wing designs. This was not only to improve performance but also to simplify the internal structure, giving weight and cost savings and allowing capacity for a large fuel volume. 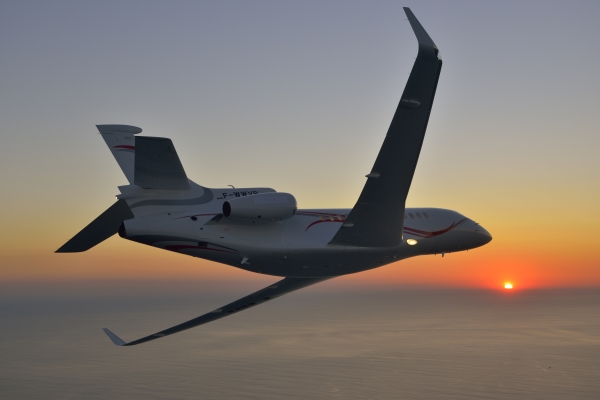 It was also the first business jet to have advanced digital fly-by-wire systems, and it featured sidestick controls and a trackball control to enable a point-and-click system for panel management together with EVS and SVS.

It is no secret that the Falcon 7X has been a great success, with around 450,000 hours in service to date, and it created a new platform to allow Dassault to move even one step further forward. In December, 2014 the company rolled out the prototype Falcon 8X, which is now in service and gives a 6,450nm range and a longer cabin. 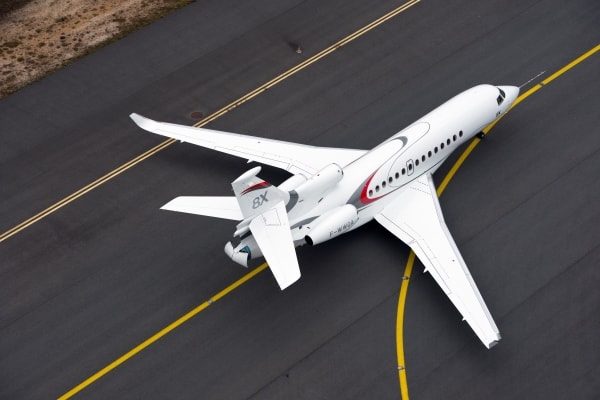 The 8X, however, is not just a stretched 7X. The design team re-examined the internal wing structure and managed to strip out around 600 lbs of weight. There are improvements to the wing leading edge slats, and the winglets have been fine-tuned for further drag reduction. These changes are all part of Dassault’s attention to detail and evidence that they never take anything for granted.

Speaking to the designers at St. Cloud, one realizes that they are not afraid to change what has gone before - and they have the most sophisticated tools to help them do so.

In parallel with the Falcon 8X, Dassault was also working on a new jet in the 13-passenger, 5,200nm class: in June, 2015 the twin-jet Falcon 5X was unveiled at Bordeaux with an ambitious target for a 20-month test program and certification planned for the end of 2016. But not all programs go smoothly, and the problems were not of Dassault’s making.

The brand new Safran Silvercrest engines that are to power the Falcon 5X have suffered development delays, and although the aircraft has flown flight tests Dassault proceeds with a 'preliminary' version of the engines. The Falcon 5X has a new generation wing that includes a flaperon and three leading edge slats, and it has an advanced EASy III flight deck based on the Honeywell Primus EPIC system with dual HUDs and sidestick controls.

Another innovative feature of the Falcon 5X is the advanced FalconScan system, which gives continual monitoring and diagnostics across 10,000 key parameters to identify technical issues as soon as they occur. Currently, certification is targetted for 2020.

Dassault Falcon has always declared that its aircraft are "engineered with passion", but that passion also comes through in many other advanced areas of Dassault’s wide ranging activities. Take, for instance, Drone technology. Dassault has teamed with Thales and the Spanish company Indra to supply the MALE unmanned aircraft. This design is based on the Israeli-built Heron UAV, and Dassault’s experience of integration of complex systems has been crucial to the program.

Another UAV venture is the nEUROn combat drone, which follows a 2003 French Government initiative to create an Unmanned Combat Air Vehicle (UCAV). For this, Dassault designed a trio of scale flying wing proof of concept UAVs, starting with the “Petit Duc” and followed by the larger “Grand Duc”. Today, this program has grown into the cooperative nEUROn project that may be the basis for a new generation of unmanned fighters for use by European nations.

Dassault’s technology demonstrator focusses on a stealthy radar cross section and infra-red concealment. The prototype, which is very similar in appearance to the American B-2 bomber, was flown in December, 2012; testing is continuing at Istres in the south of France with the demonstrator already having proved its low observability and electro-optical performance.

Over the years, Dassault has proved that it can operate in a variety of markets. Certainly, its immediate post-war history was based on military combat aircraft, but many other products - from the Falcon to the Mercure - proved that technology developed in one area can be applied to another. The product design culture of the company is, perhaps, unique, and precise engineering means Dassault’s business jets can be as much as 30% lighter than their rivals.

Many Irons in Many Fires

Dassault is involved in many other programs that stretch its capabilities. It is part of the Clean Sky research program, is working in the cooperative SESAR air traffic management and Alpha-BIRD fuel research efforts, and is coordinator of the HYPATHIE project, which is involved with measurement of high altitude humidity to understand connections between aviation and increased cloud cover.

In 2015, the Dassault Group recorded turnover of 4,176 million Euros of which 60% came from sales of Falcons and 83% came from export sales. This was a turnover growth of 26% over the past five years. The company faces major competition in both the military and Business Aviation fields, but its forward-looking approach has clearly paid dividends and a focus on its own technology is certain to see it making great advances.

Will the company build a supersonic business jet? On this they are reticent, but if they do, expect it to be another outstanding and cutting edge design.