Dave Higdon reviews Gogo’s AVANCE L5 system to discover what’s proving so popular among today’s Business Aviation operators…
Aviation falls far outside the one-size-fits-all principle. Operators go to great lengths to match their aircraft to the company needs. This rule-of-thumb applies to a variety of component areas, especially in-flight connectivity systems.
For some time, the leading systems available came in sizes and scales unsuitable for use in smaller aircraft. Main box sizes and antenna dimensions precluded use of the leading systems installed on aircraft smaller than Mid-size jets.
But the lighter end of the market hasn't been wholly out of the in-flight connectivity world. Companies like Gogo Business Aviation brought new systems to market that were scaled for the lighter-end of Business Aviation, including its newest product, Gogo AVANCE L3, profiled in the June issue of AvBuyer.
Gogo had applied its technological savvy when it launched L3 as a scaled-down version of the AVANCE L5 system, which has been delivering higher speed, greater bandwidth and additional user capabilities previously unavailable to business aircraft.
The AVANCE L5 is a system capable of delivering 4G high-speed, large-bandwidth internet and phone service to a passenger’s own phone or tablet onboard an aircraft.
200 L5 Systems Flying, 200 More Shipped
Performance, efficiency and costs combined to drive Gogo's success with the AVANCE L5 system. “It's been a great product for us and feedback from those who are flying with it has been very positive,” explains Dave Glenn, Gogo's Vice President of Customer Operations.
As with so much of Business Aviation, performance breeds success. “The performance lets people do a lot more online and that's been key to its popularity,” Glenn adds. “It's been very well received by the marketplace – through the roof recently.”
Consider the following numbers: 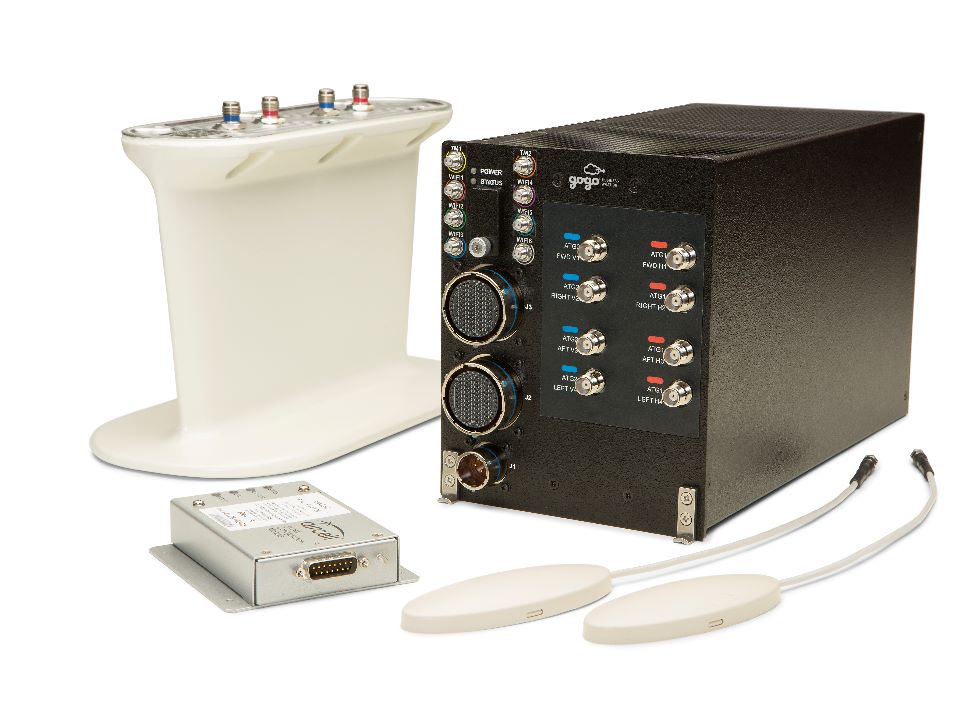 So, What’s the Appeal?
Though price and performance hold equal sway over many purchasing decisions in Business Aviation, when a new product raises performance while adding value, customer queues tend to form quickly – just as they have for Gogo's AVANCE L5. “The performance lets people do a lot more and that's been key to its popularity,” Glenn explains.
Gogo leverages its existing network of ground antennas and servers, matching them to a new set of airborne hardware which connect through a pair of antennas mounted for optimal performance. In the case of Gogo's GIV-SP test bed, this pair of 'ears' go on the lower aft fuselage.
Using the new antennae provides the AVANCE L5 4G package a way to connect to two towers simultaneously, instead of just one (per Gogo’s prior 3G system package).
Thus, the AVANCE L5 system delivers significantly higher throughput, to a level equal to LTE cellular systems, resulting in in-flight, in-cabin service far superior to what went before.
“With L5, streaming is now possible,” notes Kyle Gill, Gogo’s Vice President of Product Management. “You can do video conferencing or have someone watching streaming video or listening to a music streaming service. Compared to the experience on the ground, it is comparable to a 4G experience. But with our systems this happens at 40,000ft at a speed of 500mph.
“The L5's dual antennae and network technology allow the system to work at its top speed, and the use of a dual band system in the cabin that leverages both 2.4GHz and 5.0GHz frequencies also improves performance,” Gill added.
“And the AVANCE platform enables support capabilities – specifically cloud-based remote configuration, troubleshooting and diagnostics – and that’s something we hadn’t been able provide before.”
What Can it Do?
The L5 system provides for direct emailing exchanges using Apple mail, while sending a full-size iPhone photo worked easily during a recent test flight. Ditto for sending the same photo using the ‘Messages’ app, including via SMS.
The Slack messaging app works, but not for sending an attached photo, while the Twitter app quickly uploaded a tweet and photo. Customers can also use the Gogo ‘Vision’ app for entertainment options stored onboard – featuring a terabyte hard drive and offering more than 100 movies and TV shows – and its ‘Text & Talk’ app for communications. And voice calls sound close to normal, even with multiple users tapping the Gogo AVANCE L5 hardware.
Nevertheless, Gogo officials stress that different hardware brings varying levels of success and some companies do a better job of managing bandwidth, citing Netflix as a top performer in that regard.
The AVANCE L5 package delivers solid performance at varying levels, with pricing stepped to match. “We have pricing plans for AVANCE L5 that begin at just under $1,900/month up to $4,675/month, with varying pricing levels in between depending on how much data a customer wants or needs,” Glenn explained.
“If a customer wants streaming capabilities, pricing for those plans begins at $3,125/month.” 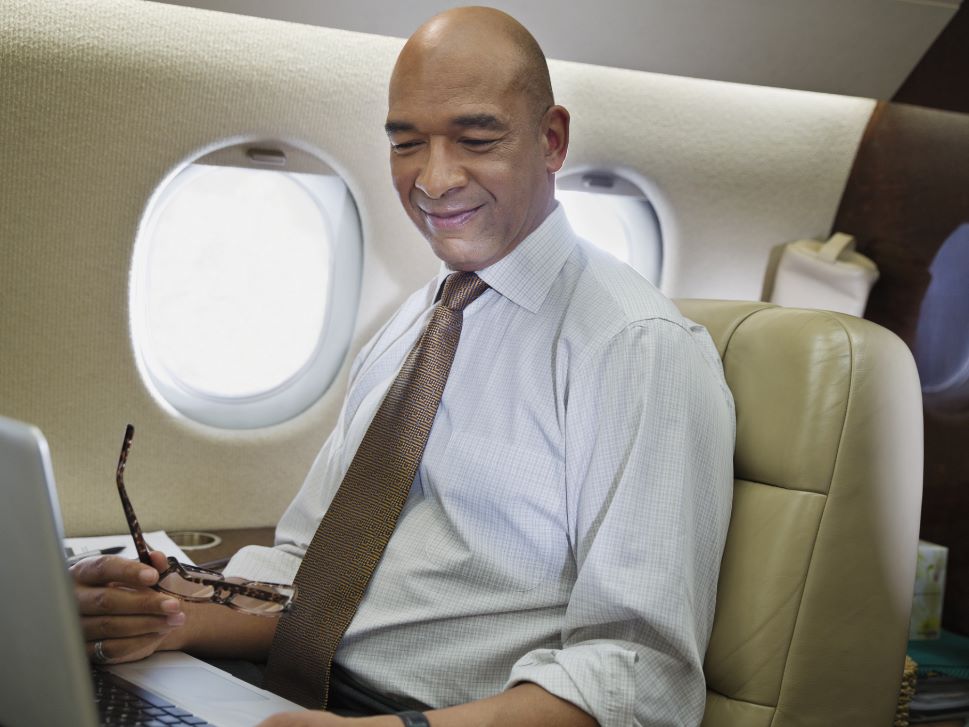 Linus Would be Proud
The ability to access the outside world from wherever your business world takes you also provides some needed security to the immediate users and their employers/co-workers per a recent study conducted by Gogo and released in May. It shows that more than 75% of travelers believe having in-flight internet makes them feel less anxious because they can stay in contact with friends and family on the ground.
In fact, 65% say it makes them feel less anxious because they can stay connected to work.
Not only do passengers want to be connected, they expect to be connected in the same way in flight as they are on the ground.
“Today, we see a shift as inflight internet moves from being a luxury to an expectation for travelers around the world,” says Alyssa Hayes, Director of Insights at Gogo.
“The importance of internet in the [charter flight] booking process has been increasing as now one-third of passengers are looking for in-flight internet when they book their flights. The desire for people to stay connected and in contact with the ground is prevalent; passengers look to not just browse the internet but also engage with social media, read the news and check their email.”
And for business passengers the options open the aircraft cabin to an increasingly business level of activity. The demand for in-flight connectivity cuts across all operating levels, whether an owned aircraft, a leased one or chartered flight.
The Gogo Global Traveler Research Study explored the changing behaviors of airline passengers across the world as it pertains to inflight connectivity and entertainment. Key findings from the report include:

The addition of fast, efficient and affordable in-flight connectivity services both enhances the time efficiency of travel and helps make the trip feel more secure.

The time is coming when virtually any aircraft will boast its own internet and phone connectivity, reducing ‘out-of-reach’ time to nearly zero. 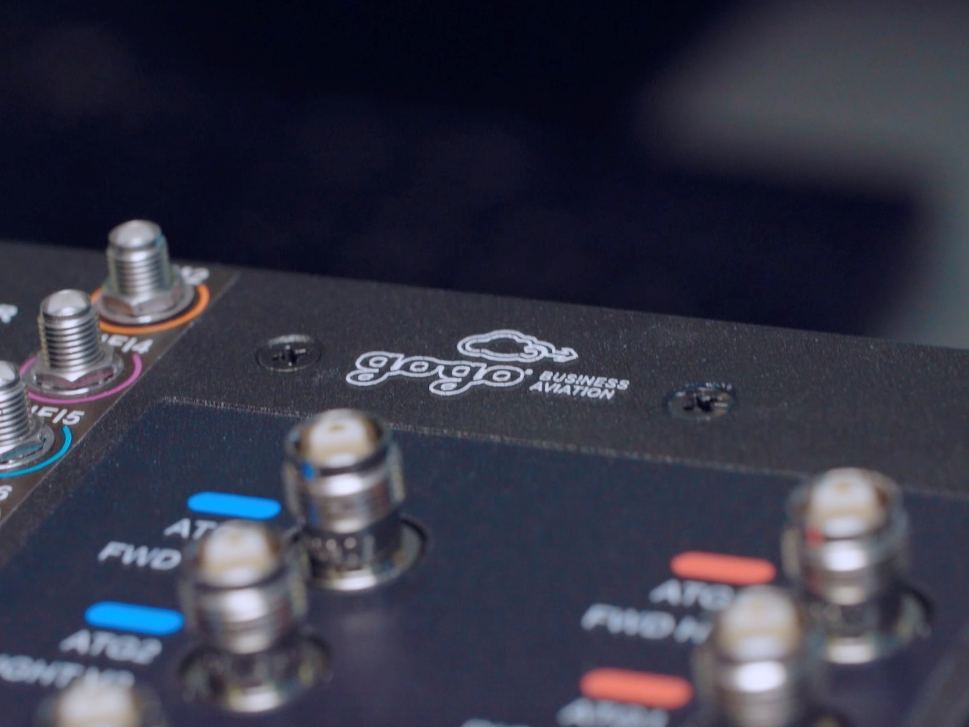 “The other part of its appeal – and this is just a general thing across the board with AVANCE systems – is that the L3 and L5 systems are software-centric, so people can add capabilities and capacities more easily than previous systems we had,” Gill explains. “If you want to add new capabilities or upgrade you can do that with the software.”
And Gill explains that new features are in the pipeline for the AVANCE L5, and as those new features become available only a simple software change will be required, not a hardware change that was needed with previous systems.
“We are modeling ourselves after the best software-centric companies like Tesla and Google who are transforming their respective industries,” Gill stated. “The AVANCE platform is something new in Business Aviation and via the software, it will make it much quicker and easier for customers to implement new capabilities on their system.”
For now the company's first focus is on meeting the exceptional demand for the system. If those eventual feature advances are anything like what Gogo provided with the AVANCE L3 package, this in-flight connectivity package will only get more feature rich.
More information from https://business.gogoair.com

How to Stay on Budget With Inflight Wi-Fi
Jet Connectivity: How Does AVANCE L3 Work?