I happened upon part of a conversation at the recent EAA AirVenture Oshkosh that made me stop in my tracks. “Well I guess you could say they still build them like they used to-” one attendee said to another. “…except for the new equipment they attach and install. That’s what keeps them viable.” 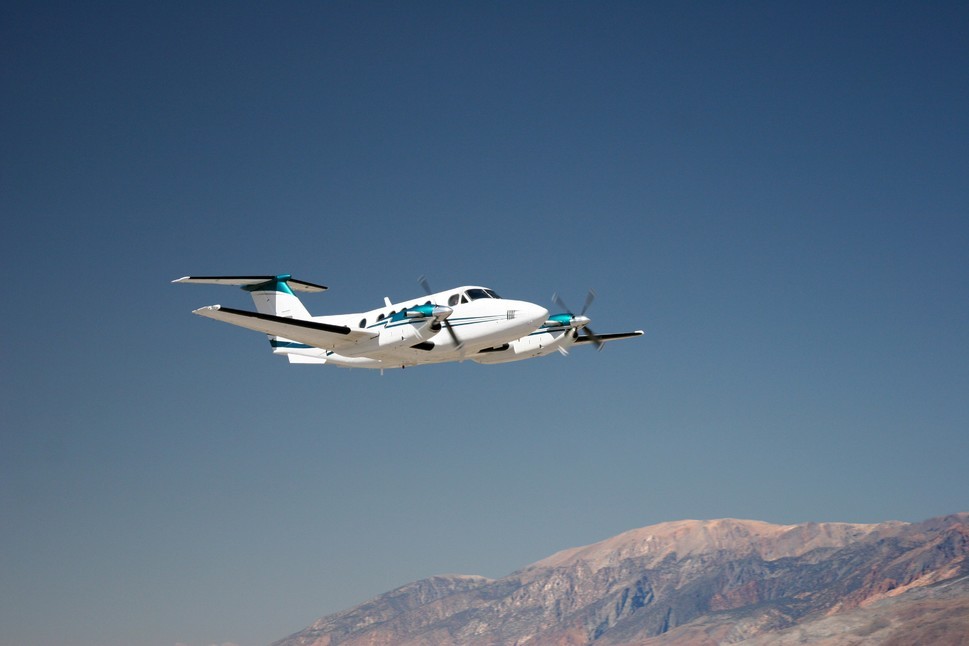 I happened upon part of a conversation at the recent EAA AirVenture Oshkosh that made me stop in my tracks. “Well I guess you could say they still build them like they used to-” one attendee said to another. “…except for the new equipment they attach and install. That’s what keeps them viable.”

Pressed to elaborate his comment- the attendee clarified that he believed the aircraft he was looking at was still everything that made it attractive originally - only today- it was even better.

The attendee was standing directly in front of the Hawker Beechcraft exhibit- and his remarks were made with specific reference to the Beech King Airs on display - world leaders in turboprops since their arrival on the market in 1964.

Lest there was any doubt Hawker Beechcraft Company plans to let the King Air rule the skies for many years to come- you need only look at the 350i- the 250 and the C90GTx - the current heirs to the crown.

Through the years the OEM and its predecessor companies have varied the offerings that wear the King Air crown- but one remains the perennial: the 90-Series that launched the line and remains the entry-level King Air today.

Depending on your perspective- underpinning the new models will be a fleet of old - after all- in 47 years nearly 7-000 of the original and Super King Air models have flown for multiple purposes.

With so many flying- it’s little wonder that so many options exist to upgrade older King Airs making them nearly identical in speed- economy and functionality to the newer ones – particularly when you take into account the affordable prices of older airframes these days.

A King Among Upgradeable Airplanes


Looking over the make-over options it’s clear that the years have been good to the King Air family. There’s almost no part of the airplane lacking at least one option for an upgrade. You can get engines upgrades that deliver more power- better reliability- longer life and improved operating economy – with better performance as a bonus.

Avionics upgrades abound and while you may not be able to identically duplicate one of the new panels available only through an OEM you can achieve the same level of modernity- utility and functionality. Further- if an interior component can be installed inside almost any other airplane- legally- it can very likely be installed as a component upgrade to freshen and renew the cabin interior of a King Air – again- with a similar level of all those good things we like when we shop for new.

The chances are that if you already own a King Air you’re in a great position to embrace the ‘new and wonderful’ in avionics and powerplants at an investment level sure to keep your CFO smiling.


As one avionics OEM likes to note- it is possible to get a better deal than buying a new airplane by shopping- wisely- for a suitable King Air in need of a nose-cone to tailcone makeover. You can invest in all that you want if done prudently.

A King Air 100-series model was recently on the market for $750-000. It had already upgraded to later-model PT6A powerplants- had a modern color MFD to work with color radar and satellite weather – and it sported two IFR-approved GPS navigators- one being WAAS-compliant. Think about it: a good interior with a few aftermarket upgrades and the 30-year-oldplus airframe in good shape – for below a million dollars.

In today’s tight economic environment- as much as possible for as little as possible always feels like you did better. With that in mind- let’s look at some of the more prominent options available for those stillairworthy- but older King Airs.


Modification can be so simple in concept- but so complex in execution that they remain overlooked for years of aircraft manufacturing. Take a look at Idaho-based American Aviation Inc.’s King Air modification as an example:

The above is not an engine upgrade or complex airframe clean-up - the two hand-in-glove ideas outlined simply involve air flow to- and around the engines. Firstly- there’s what the company calls “ram air recovery” in the Pitot Cowling System. Developed for 90- and 100-series King Airs and delivered without ram-air recovery cowlings- these duct a higher percentage of the available air to the engine inlet fan- increasing inlet pressure and reducing the load on the compressor section – which- in turn- allows more power to go to the propeller.

Owners report their engines making approximately 150 pounds more torque across the cruise altitudes- allowing them to fly higher and still maintain cruise power – which translates into higher cruise speeds thanks to the thinner air and reduced drag.

Reduction of parasitic drag around the cowl is also a point in favor of American Aviation’s cowls- which not only use 98 percent of the air entering the engine inlet- but also smooth out airflow around the cowl thanks to new designs for the combustion-air inlet and heat-exchanger ducts. Drag alone is the target of American Aviation’s second noteworthy King Air modification: Speed Stacks. At their simplest- these are new exhaust pipes for the PT6A engines.

At the level of how they work- they are complex designs optimized for drag reduction and promoting boundary layer improvements that help keep the King Air cowl free of the sooty exhaust residue commonly found downstream of old PT6A stacks. Working together the Pitot Cowling System and Speed Stacks produce more speed- improved fuel efficiency- longer range and more altitude latitude – and for a relatively small investment compared to a powerplant upgrade. More from www.americanaviationinc.com


The King Air 90-series has long been a bastion of the owner-flown business-turbine aircraft- thanks to its hardy nature- good flying characteristics- speed-and-range balance and its Pratt & Whitney Canada PT6 engines.

For the owner/pilot- the flight deck of a King Air 90-series is as much an office as the desk on the ground. It’s on the flight deck - where the airplane gets piloted from Point A to Point B and beyond - that many an hour is spent thinking about the flying and letting the brain unleash its creative synapses while the Flight Management System handles the en route chores.

With deep thinking and critical flying going on- what savvy pilot wouldn’t want a front office that makes the job easier? Thankfully there are many ways to upgrade. You can even go all-digital. The King Air 100-series aircraft described above could be an ideal candidate for a full panel makeover with something along the lines of the Alliant King Air Flight Deck giving the propjet some of general aviation’s best hardware.

Power to the Props!


Avionics don’t make the airplane faster (though a WAAS GPS may improve your route efficiency and landing access). Nor will a new panel make the airplane climb better- carry more or burn less fuel. Only a powerplant upgrade can - with a few select airframe improvements - deliver on those gains. Happily- some impressive engine and airframe- smoothing offerings are available – some so well done that they form the standard for new King Airs from HBC.

Factor the company’s partnerships with other modifiers and support locations around the globe and it’s no surprise that the King Air OEM is building King Airs incorporating Blackhawk’s technologies.

The benefits are multiple from Blackhawk’s engine products: longer TBO- improved fuel efficiency- better climb times (to higher altitudes)- longer range and higher payloads. Blackhawk offers most of its engine packages at prices within 15 percent of overhauling original powerplants – but for factory-new engines and propellers with new-engine warranties and improved support.

Blackhawk has clearly become a King Air power-player thanks to more than a decade of happy clients. (More from www.blackhawk.aero)

As with other powerplant upgrades- the Power90 produces significant improvements to the King Air’s performance- maintenance and appearance- while the company also claims the Power90 Upgrade reduces maintenance costs and lowers overall ownership costs for the King Air 90. More from http://smyrnaaircenter.com/

Raisbeck Engineering has 30 years of experience designing- developing and marketing performance systems for King Airs- giving all Raisbeck-equipped aircraft an edge in performance over the same basic King Air where take-off distance- climb- speed and range are measured.

Raisbeck individually engineers each package or improvement to enhance specific operational areas- and packages them to exploit their collective improvements on the overall performance of certain King Air models. Since 2005- Raisbeck has used the name “EPIC” for the “grand” performance these packages deliver and priced the packages accordingly to help operators when the time comes to embrace the improvements. More from www.raisbeck.com

It’s What's Inside That Counts…


Attention to the cabin behind the flight deck is where all improvements come together. With 47 years dotting airport ramps- and nearly 7-000 aircraft flying it’s no surprise that many an interior- overhaul and specialty shop can offer interior refurbishment for the King Air.

Regardless of the other work performed- if any- a new interior – or simply freshened rags and rugs (upholstery- carpet) can give a well-worn airplane the sheen of all-new. Based in Groveland- California- Aviation Design specializes in custom interiors and Confor foam-seating using technology developed for NASA’s space flight programs. The company emphasizes seating comfort and quiet cabin- as do other purveyors of interior magic - Cutter Aviation- Duncan and many- many others- including HBC service centers.

A Tip On Efficiency…


BLR (Boundary Layer Research) is a relatively new name in aerodynamic improvements. The company offers its own take on an old idea that has recently experienced a surge: winglets.

BLR’s aftermarket winglets bring the benefits that factory-designed winglets have long delivered on the King Air 350 to the Beechcraft King Air 200 and 300-series aircraft. These aluminium and carbon fiber winglets increase wingspan by 3.5 feet- and thus also increase the wing’s aspect ratio – significantly reducing induced drag in the process.

The improvements improve short-field takeoff- climb- high-altitude operations- cruise- speed- fuel burn- handling qualities and slow flight according to the company. They work so well that a version has been introduced on the new King Air 250 – a design that embraces a number of after-market upgrades in HBC’s drive to continue building a better King Air. More from www.blraerospace.com