What are Your Aircraft Upgrade Priorities? (Part 1)

An aircraft upgrade can be considered on several different levels and priorities. From a new interior to avionics, engine improvement to winglets, Ken Elliott provides some background information on what's available to aircraft owners... 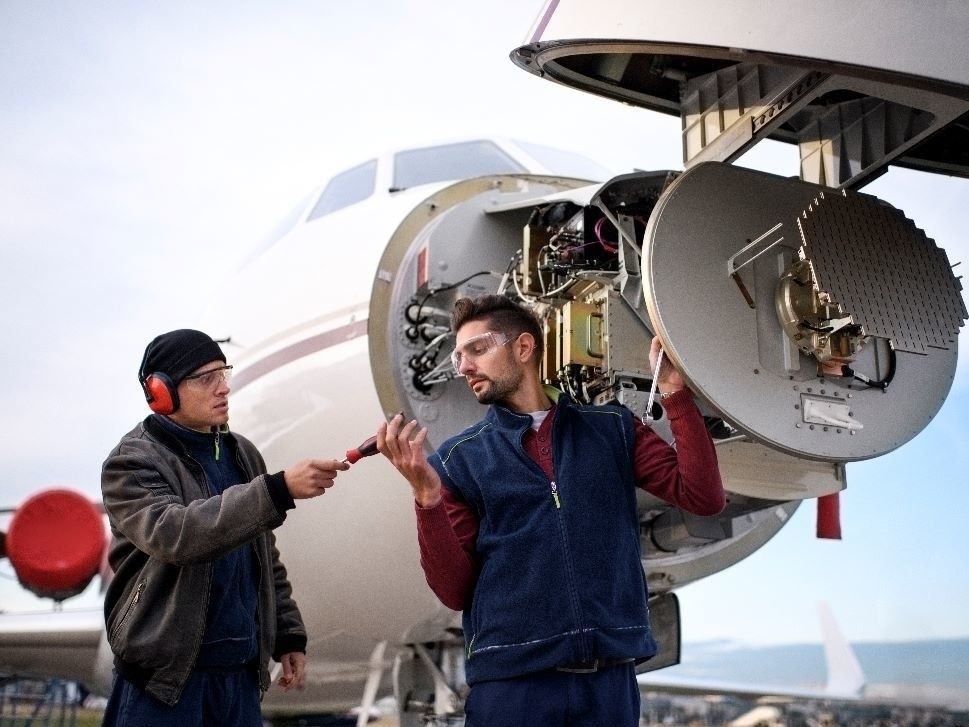 Over a three-part series Ken Elliott discusses aircraft upgrade priorities. In his opening part, he offers some background information…
An aircraft upgrade can be considered on several different levels and have varying priorities. It can be anything from a new interior to avionics, engine improvement to winglets. Although this series of articles will focus more on avionics (the area that is the least understood), other upgrades will be included within the wider context.
Upgrades, or modifications (Mods) fall into two major categories:
As a cautionary note, if you intend to operate or sell your aircraft into a different country from where it will be modified, check with the provider that the Mod is ‘familiarized’ or acceptable to the Civil Aviation Authority (CAA) for the country of destination. There are plenty of tales of woe to be heard that are centered on the different airworthiness requirements applied around the world, resulting in anything from a minor change to complete removal of the Mod.
Potentially, non-OEM created or recognized Mods, will incur greater scrutiny by the applicable CAA.
As another caution, do not assume your newly purchased aircraft is equipped for current and future mandated requirements. Some aircraft are provisioned and only ‘activated’ if you will be based, or intend to operate in affected regions. Some are provisioned, pending product availability, and some are immature – so expect to receive a steady stream of software updates or, as part of a combined ‘package’ of updates, every year or so.
Prioritizing Mods is difficult for flight departments who have budget and time constraints. There is also the bigger decision centered on whether to ‘continue to modify’ or trade the aircraft.
Figure 1 highlights the four major ways Mods are initiated and their likely priority. This same priority is applied to both budgeting and scheduling decisions. 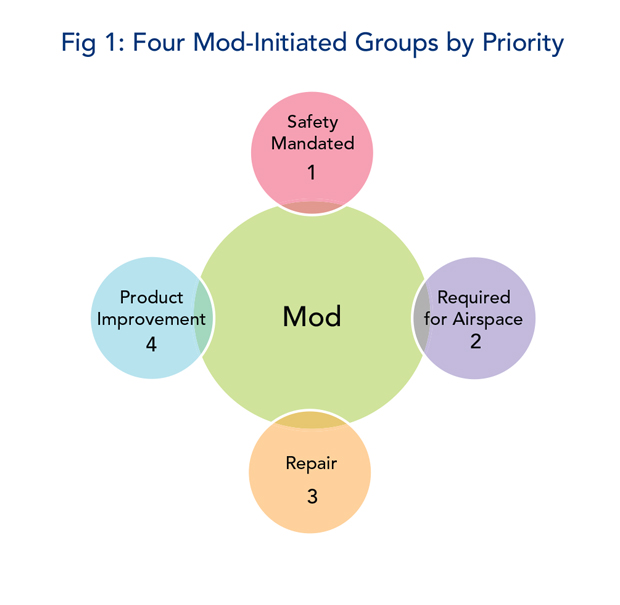 Priority Level 1 – Safety Mandated
Always the highest priority, safety-mandated Mods are provided to operators via CAA Airworthiness Directives (ADs). Very often the product or aircraft manufacturer will have issued a priority bulletin of some sort.
As aircraft age and OEMs pay less attention, it becomes harder to track these and operators need to maintain vigilance. Maintenance Management Programs (MMP) usually catch them if you are signed up to one. Some Service Bulletins issued by manufacturers are also safety-related.
Priority Level 2 – Required for Airspace
Pretty much all the mandates that involve Mods (equipage) required for airspace fall under the Communication, Navigation and Surveillance (CNS) categories of avionics. Apart from ADS-B Out, unless you operate oceanic or specific navigation profiles, there is little to be concerned about at this time.
However, check the broadly applicable existing mandated equipage (since mid-1990s) are already installed on your aircraft, based on its former and current operating rules. For guidance, see Table A, below.

Priority Level 3 - Repair
Routine inspections may result in repairs that may be considered Mods. The repair-Mod could be authorized via Approved Data, approved via a DER/DAR/ODA and released by an MRO.
A Mod of this nature will fall under the category of either ‘Major’ or ‘Minor’ and will be very reliant on engineering and certification expertise. Unless safety related, the repair-Mod could be scheduled to combine with a major inspection. That also allows for reduced component access, downtime and ability to budget.
Priority Level 4 – Product Improvement
A catch-all for anything optional: For flight departments product improvements are mostly a Return on Investment (ROI) decision, unless the owner deems it required. The drivers behind these Mods are many and varied.
Manufacturers, MROs and third-party vendors market heavily in this area because it is potentially a ‘nice to have’ modification. The justification is made clear in detailed brochures, video clips, webinars and product demonstrations.
On the whole, product improvements should be considered carefully. They can bring tremendous benefits, cost savings and aircraft trade advantages to an operator.
Required for Airspace
Figure 2 highlights the basic high-level focus areas of today’s flight departments. Some see Connectivity as a requirement and although the aircraft may have been selected to match its engine and airframe performance requirements, it often is lacking in Connectivity. 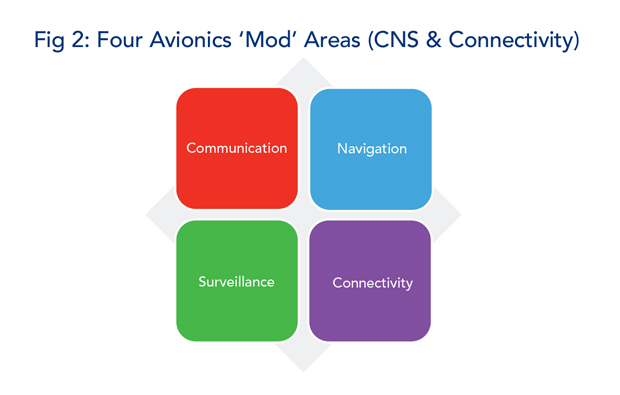 Without getting into dates and equipage detail, the categories of CNS and elements of Connectivity can be summarized for prioritization. Each CNS category has a regional or flight track focus, where requirements may be interpreted and applied differently, either by date, equipage or operational behavior.
It is incumbent on the flight department to match the categories with their intended operation’s geographic envelope and then dive into the more detailed requirements. 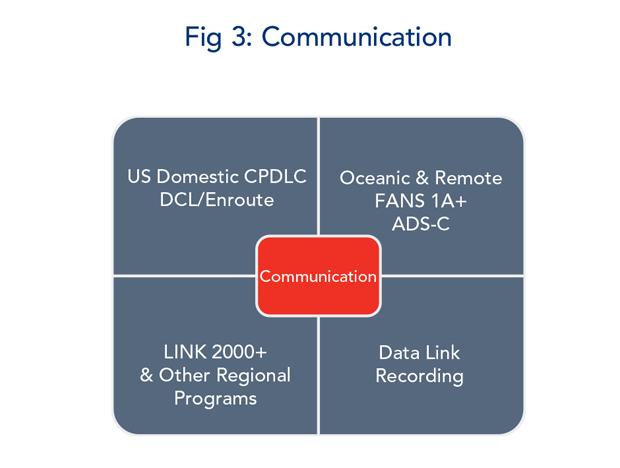 Until 2020 arrives, most folk are focusing on FANS datalink requirements. FANS is not just datalink, it has significant navigation (RNP 10/4) and surveillance (ADS-C) requirements too. Europe’s VHF Data Link (VDL), an upcoming requirement, is already manifest in many jets and turboprops partially because mandates once were active and now delayed until 2020.
The US is focusing on its Segment 1, Phase 1 & 2, Departure Clearance (DCL) and – starting late 2018 – enroute operations at numerous air traffic centers. These are not yet requirements, in the sense of mandates.
Datalink Recording, often overlooked, is the simple fact that if you need to record voice now (CVR installed), then you also need to be recording data so a Mod is required. 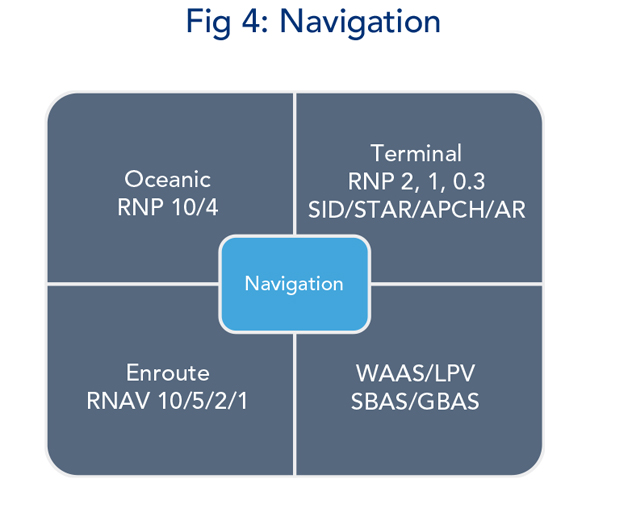 Constantly evolving into time-based navigation, procedures are tightening and becoming more accurate. Navigation operations are strictly based on where and how you need or want to operate. If you want to fly the best routes you need to equip, it is that simple.
Priorities are all about saving time, fuel costs, wear and tear and completing the flight as filed. These procedures are tailored to flights undertaken in Oceanic, Enroute, Terminal and Approach airspace. Low Vision Operations, using Head-Up Displays and Enhanced Vision Systems can be included in the list too. 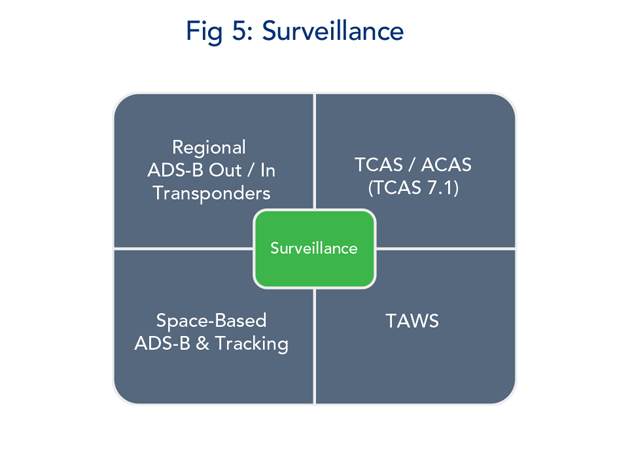 Rapidly expanding surveillance is enabling safe and reliable flights through shared tracking. If enabled, theoretically anyone will track anyone else, anywhere. This is where ADS-B comes in, either domestic, regional or space-based.
Traffic detection and avoidance is already found in most larger aircraft and along with TAWS is mostly updated to remain current to the denser traffic, increased obstacles and other factors. Priorities remain around mandated systems and required updates that could be only software. 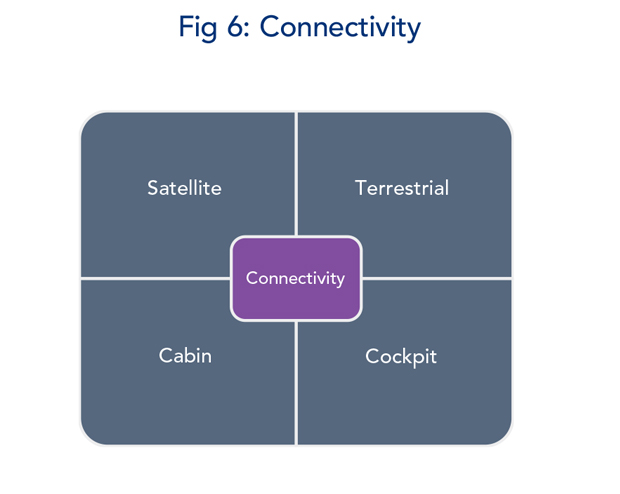 Connectivity includes so many technologies and touches both cockpit and cabin. Priorities are mostly set by the person(s) in the comfortable (cabin) seats, but this is an opportunity for the flight department to be proactive, stay informed and lead the discussions.
The possibility of failure is very high, when it comes to selecting Connectivity solutions. Education and currency are key. As a rule of thumb, think range, bandwidth, capability and higher cost for satellite (Satcom) and all reduced for terrestrial (ATG). However, even that is changing, and the scales are balancing out.
Of course, CNS and Connectivity, while crucial, are not everything. Other Mods, mostly considered product improvements and partially represented in Figure 7, will prioritize differently by flight operation. The 88 Parameter FDR Mod, the EASA Certification Package and some of the OEM service changes can be considered ‘required’ if you need them for your geographic operating envelope.
Others are transformational, such as paperless cockpit, flat panel displays, cabin interiors, paint and winglets.
In Summary
Prioritizing Mods as upgrades, retrofit or service/products is not easy and is a different exercise for each flight department. Next time, we will dig deeper into specific upgrades and how to measure their relevance to you.
Always consider the impact of any Mod to safety, operational requirement or advantage and only then consider the ROI. Safety is not quantifiable and even a low risk of a negative occurrence can seem meaningless until it happens. Operations need to be reliable and provide an assured level of confidence to the persons in the back seat. That sometimes requires a decision that may be difficult to justify by numbers alone.
Do not forget to think of aligning Mods to aircraft inspections, to save on downtime, cost, aircraft access and to allow for more open dates on the flight schedule calendar. 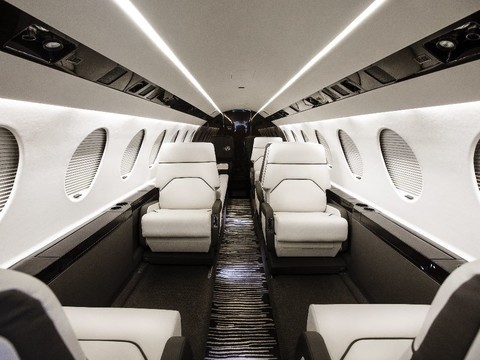 Questions for Planning Your Interior Refurbishme... 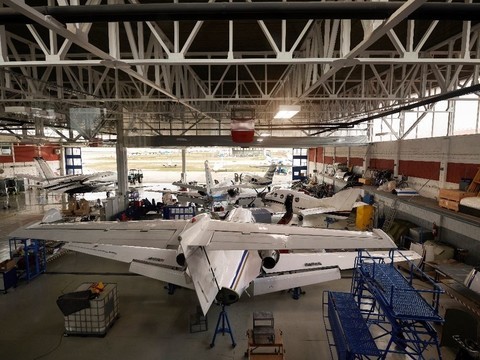 What to Know About Aircraft Maintenance