In this month’s Aircraft Comparative Analysis- we provide information on the Airbus ACJ319 business jet. The current New/Used fleet percentage split for the ACJ319 business jet is 67% new and 33% pre-owned according to JETNET records. 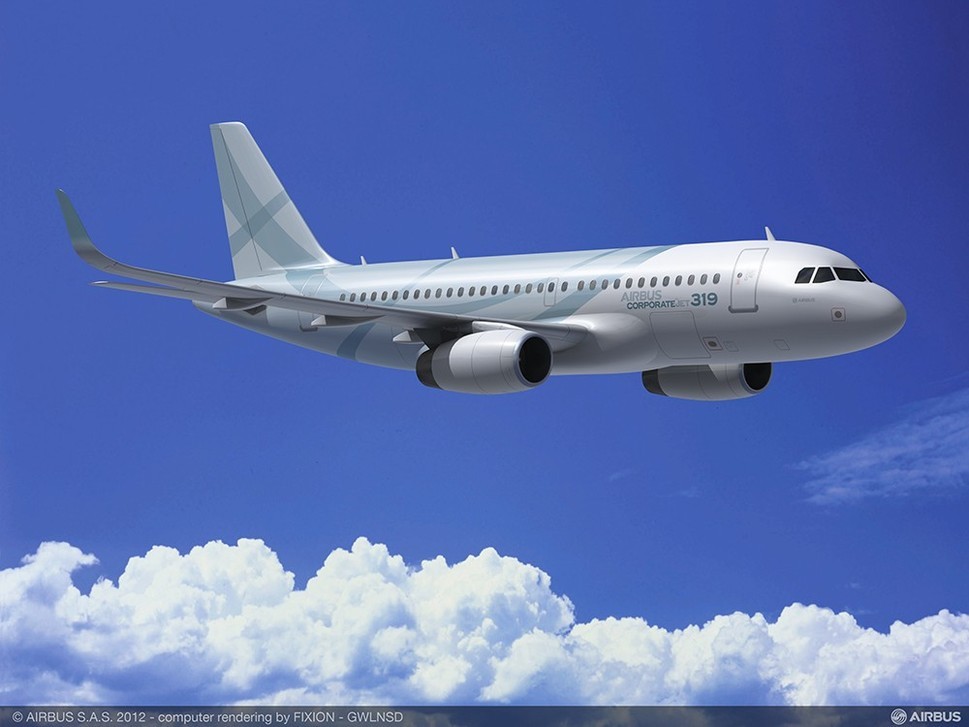 In this month’s Aircraft Comparative Analysis- we provide information on the Airbus A319 jet for sale . The current New/Used fleet percentage split for the A319 business jet is 67% new and 33% pre-owned according to JETNET records.

Over the following paragraphs- we’ll consider some of the productivity parameters - including payload- range- speed and cabin size- along with current market value. The field of study also includes the Boeing BBJ for Sale.

BRIEF HISTORY
The market for large executive cabin class aircraft began in 1959 with the introduction of the Boeing 707 jet. In the late 1990s demand forced two leading commercial OEMs to address the market with the BBJ (Boeing Business Jet) in 1998 and ACJ (Airbus Corporate Jet) in 1999.

Airbus was buoyed by the success of the A319 airliner produced from 1995 to present. Today there are 1-264 A319s serving airline companies worldwide- and 107 additional units are on order- per JETNET’s new Commercial Airliner ‘BigPlane’ fleet database. The ACJ319 is fitted with a new-generation super-critical wing for higher cruise speed and better fuel economy- an advanced glass cockpit- and fly-by-wire flight controls and side-stick controller. Moreover- the ACJ can be fitted with up to six auxiliary center tanks (ACT) in the fuselage- boosting its range. This aircraft can be RVSM certified when service bulletin A320-34-1137 is complied with.

Table A (below) shows there are 247 ACJ and BBJ BusinessLiners in-operation today- excluding the 496 converted airliners (see Table B). Airbus currently has 94 corporate/ business jets in operation (38% of the total fleet of 247). 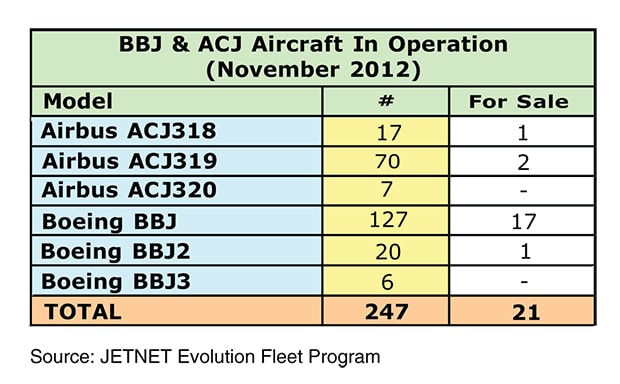 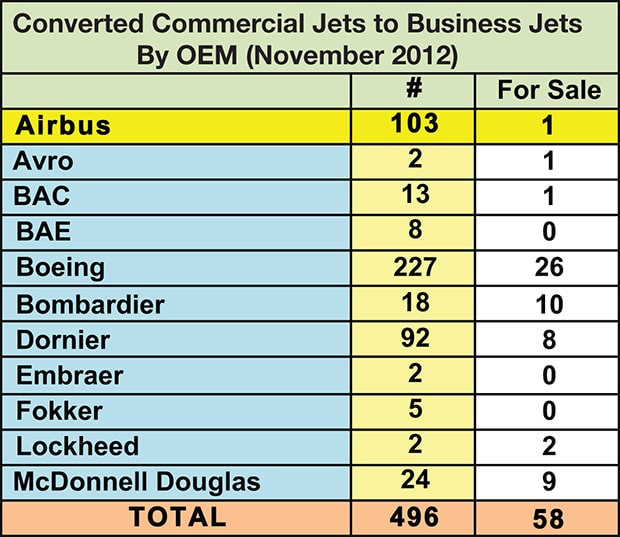 The data contained in Table C (below) is published in the B&CA- May 2012 issue- but is also sourced from Conklin & de Decker. As we have mentioned in past articles- a potential operator should focus on payload capability as a key factor. The Airbus ACJ319 ‘Available payload with Maximum Fuel’ at 1-710 pounds is significantly less than that offered by the Boeing BBJ (4-723 lbs).

In spite of its lower available payload with maximum fuel weight- according to Conklin & de Decker the cabin volume of the ACJ319 at 5-900 cubic feet is 9.5 percent larger than the BBJ aircraft (which measures 5-390 cubic feet)- as shown in Chart A (below). These spacious jets are commonly used by sports teams- governments and various global corporations.

Using data published in the May 2012 B&CA Planning and Purchasing Handbook and the August 2012 B&CA Operations Planning Guide we will compare our aircraft. The nationwide average Jet-A fuel cost in the August 2012 edition was $6.30 per gallon at press time- so for the sake of comparison we’ll chart the numbers as published.

Note: Fuel price used from this source does not represent an average price for the year. Chart B (below) details ‘Cost per Mile’- and compares the ACJ319 to the BBJ factoring direct costs- and with each aircraft flying a 6-000nm mission with 1-600 pounds (eight passengers) payload. The ACJ319 is at $13.58 per nautical mile compared to the BBJ at $11.47- which is greater than $2.00 or 11.8% more per nautical mile. 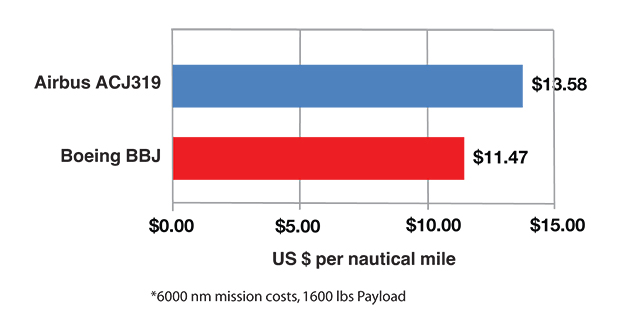 The ‘Total Variable Cost’- illustrated in Chart C- (below) is defined as the cost of fuel expense- maintenance labor expense- scheduled parts expense and miscellaneous trip expense. The total variable cost for the ACJ319 at $5-999 has an 18.3% higher variable cost per hour compared to the BBJ at $5-071.

The points in Chart D (below) center on the ACJ319 and BBJ aircraft. Pricing used in the vertical axis is as published in the B&CA 2012 Purchase Planning Handbook. The productivity index requires further discussion in that the factors used can be somewhat arbitrary. Productivity can be defined (and it is here) as the multiple of three factors.

2. The long-range cruise speed flown to achieve that range;

3. The cabin volume available for passengers and amenities.

The result is a very large number so for the purpose of charting- each result is divided by one billion. The examples plotted are confined to the aircraft in this study. A computed curve fit on this plot would not be very tight- but when all business jets are considered the “r” squared factor would equal a number above 0.9. Others may choose different parameters- but serious business jet buyers are usually impressed with price- range- speed- and cabin size. 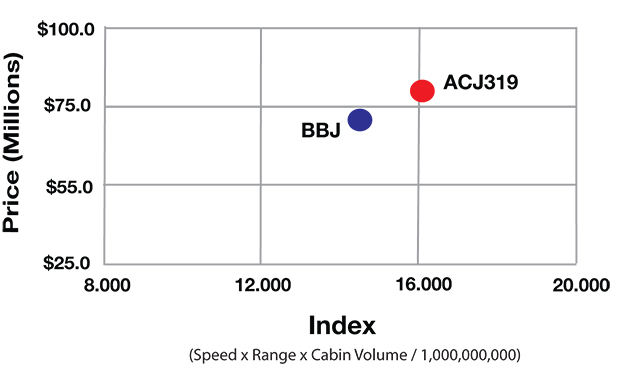 After consideration of the higher price of $10m- greater cabin volume- and less fuel usage- we can conclude that the Airbus ACJ319- as shown in the productivity index Chart D- does offer competitive value. However- the ACJ319 as measured by the cost per mile and variable cost are significantly greater than the BBJ. Also- the available payload with maximum fuel is significantly less than that offered by the Boeing BBJ.

Table E (below) represents the average pre-owned retail price from Vref for each aircraft. The last two columns of information show the number of aircraft in-operation- and the percentage “For Sale”- as per JETNET. It is interesting to note that with 70 aircraft in-operation today (66% new and 33% used)- only 2 or 2.9% of the ACJ319 fleet is currently ‘For Sale’ (traditionally a seller’s market). The BBJ is in a much different market position with 17 or 13.4% of the fleet of 127 aircraft for sale.

Table F (below)- meanwhile- offers a breakdown of the location by continent for the worldwide wholly-owned ACJ319 fleet. Europe is home to the majority of the ACJ319 fleet- with 39 (57%)- followed by Asia at 24 units (35%). Currently- no ACJ319 aircraft are in shared ownership- and there is only one in a fractional ownership arrangement.

Within the preceding paragraphs we have touched upon several of the key attributes that business jet operators value. However- there are often other qualities such as service and support that factor in a buying decision- but which are beyond the scope of this article. The ACJ319 jet for sale has its advantages for those seeking a larger cabin volume - so those operators in the market should find the preceding comparison of value. Our expectations are that the ACJ319 will continue to do very well in the pre-owned market for the foreseeable future.

Find the latest large jets on the market, at Large Jets for sale.