In this month’s Aircraft Comparative Analysis- we provide information on the Cessna Citation XLS+. We’ll consider some of the productivity parameters - including payload- range- speed and cabin size- along with current market value. The field of study also includes Bombardier’s Learjet 40XR. 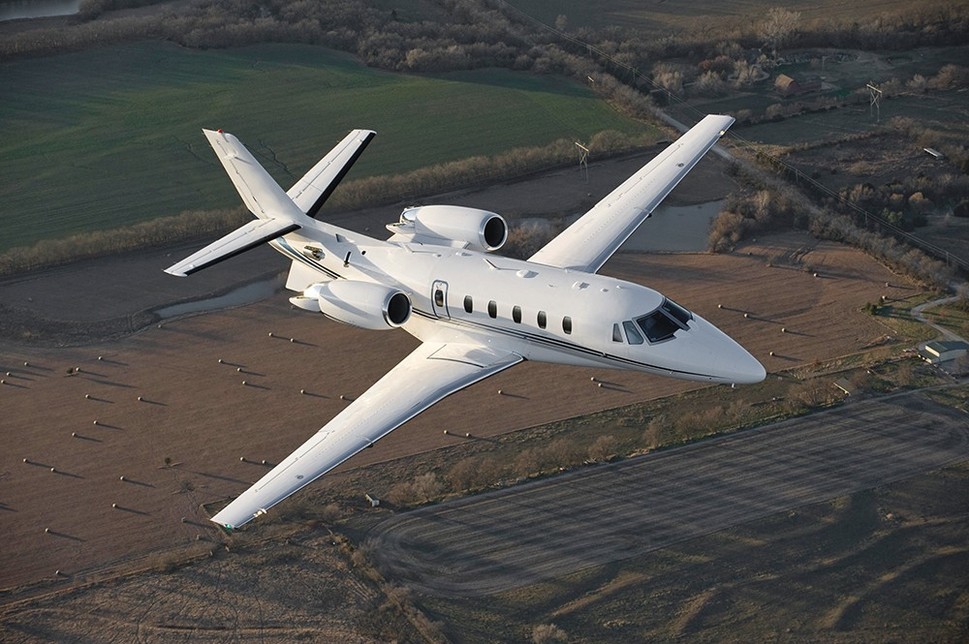 In this month’s Aircraft Comparative Analysis- we provide information on the Cessna Citation XLS+ for sale. We’ll consider some of the productivity parameters - including payload- range- speed and cabin size- along with current market value. The field of study also includes Bombardier’s Learjet 40XR jet for sale.

The XLS traveled faster and further than its predecessor and can climb to a maximum flight level of 45-000 feet with a better climb rate than the Excel. The XLS utilizes two Pratt & Whitney PW545B engines and a Honeywell Primus 1000 avionics suite. Then in 2008- the Citation XLS+ replaced production of the Citation XLS. New features included the fully integrated Collins Pro Line 21 avionics suite- which includes XM animated broadcast graphical weather and charts- and electronically controlled (FADEC) engines from Pratt & Whitney.

Exterior and interior restyling is also integrated into the new model - most prominently the extended contour of the nose and expanded seat widths. Certification for the Citation XLS+ came in the first quarter of 2008 with the first customer delivery in the final quarter of 2008. 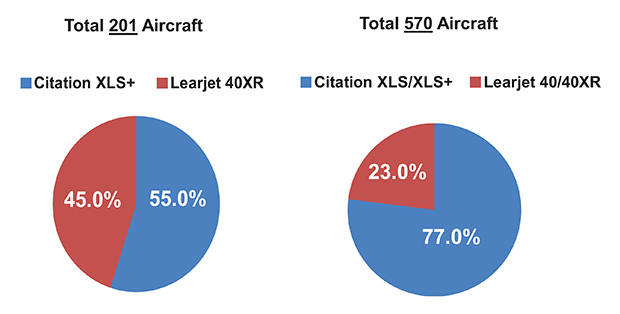 The data contained in Table A is published in the B&CA- May 2012 issue- but is also sourced from Conklin & de Decker. As we have mentioned in past articles- a potential operator should focus on payload capability as a key factor. The Citation XLS+ ‘Available payload with Maximum Fuel’ at 860 pounds is half of that offered by the Learjet 40XR (1-925 lbs).

CABIN VOLUME
However- according to Conklin & de Decker- the cabin volume of the Citation XLS+ at 461 cubic feet is 27 percent larger than the Learjet 40XR aircraft (363 cubic feet)- as shown in Chart B.

POWERPLANT DETAILS
The Citation XLS+ is powered by two Pratt & Whitney Canada PW545C engines- each offering a thrust rating of 4-119 pounds. The Learjet 40XR- meanwhile- is powered by a pair of Honeywell TFE731-20BR engines- each with a thrust rating of 3-500 pounds. Table B- sourced from the Aircraft Cost Calculator (ACC) shows the fuel usage by each aircraft model in this field of study. The Citation XLS+ - at 246 gallons per hour (GPH) - uses 29 gallons per hour (or 13.4% more fuel than the Learjet 40XR at 217 GPH).

COST PER MILE COMPARISONS
Using data published in the May 2012 B&CA Planning and Purchasing Handbook and the August 2012 B&CA Operations Planning Guide we will compare our aircraft. The nationwide average Jet-A fuel cost in the August 2012 edition was $6.30 per gallon at press time- so for the sake of comparison we’ll chart the numbers as published. Note: Fuel price used from this source does not represent an average price for the year. Chart C details ‘Cost per Mile’- and compares the Citation XLS+ to the Learjet 40XR factoring direct costs- and with each aircraft flying a 1-000nm mission with 800 pounds (four passengers) payload. The Citation XLS+ cost at $4.26 per nautical mile is greater by $0.66 per mile- or 18% than the Learjet 40XR at $3.60. 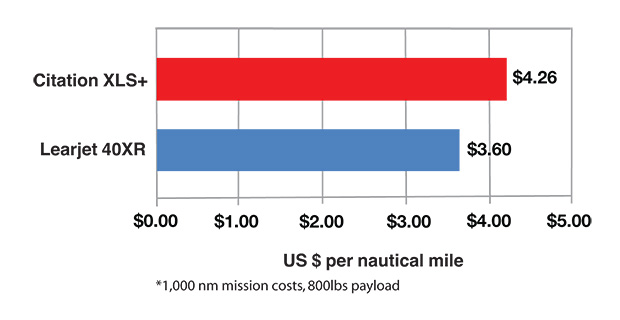 TOTAL VARIABLE COST COMPARISONS
The ‘Total Variable Cost’- illustrated in Chart D- is defined as the cost of Fuel Expense- Maintenance Labor Expense- Scheduled Parts Expense- and Miscellaneous trip expense. The total variable cost for the Citation XLS+ at $1-837 has a 12.4% higher variable cost per hour compared to the Learjet 40XR at $1-634.

PRODUCTIVITY COMPARISONS
The points in Chart E center on the same two business jets and draw in the older Learjet 40 and Citation XLS for context. Pricing used in the vertical axis is as published in the B&CA 2012 Purchase Planning Handbook. The productivity index requires further discussion in that the factors used can be somewhat arbitrary. Productivity can be defined (and it is here) as the multiple of three factors.

1. Range with full payload and available fuel;
2. The long-range cruise speed flown to achieve that range;
3. The cabin volume available for passengers and amenities.

The result is a very large number so for the purpose of charting- each result is divided by one billion. The examples plotted are confined to the aircraft in this study. A computed curve fit on this plot would not be very tight- but when all business jets are considered the “r” squared factor would equal a number above 0.9. Others may choose different parameters- but serious business jet buyers are usually impressed with price- range- speed and cabin size.

After consideration of the Price- Range- Speed and Cabin Size- we can conclude that the Citation XLS+ aircraft- as shown in the productivity index Chart E- is highly productive- and has been popular with a higher market share percentage and delivered more aircraft after having started three years later (2008 vs 2005) than the Learjet 40XR.

What will the future hold? Will the XLS+ model be upgraded- or will Cessna develop a brand new design? Bombardier has announced an upgrade on the Learjet 40XR in the form of the Learjet 70. It is assumed that to keep its competitive edge- Cessna will need to respond with an upgrade of its own. Our own findings indicate that such an upgrade may need to address areas of operating cost and possibly payload capability with full fuel among others.

Table C is the average pre-owned retail price from Vref for each aircraft with the latest model produced. The last two columns of information show the number of aircraft in-operation- and the percentage “For Sale” from JETNET. It is interesting to note that with 110 aircraft in operation- only 5.5% of the XLS+ fleet is currently for sale (seller’s market). Conversely- out of a fleet of 91 Learjet 40XRs- 12% are for sale (traditionally a buyer’s market).

LOCATION BY CONTINENT
Table E- meanwhile- offers a breakdown of the location by continent for the Wholly-Owned and Shared Citation XLS+ business jet. North America is home to the majority of the fleet- with 60% of the 110 XLS+ aircraft- followed by Europe at 23%. Currently- three Citation XLS+ aircraft are in shared ownership in North America- and there are none in fractional-ownership arrangements.

SUMMARY Within the preceding paragraphs we have touched upon several of the key attributes that business jet operators value. However- there are often other qualities such as service and support that factor in a buying decision- but are beyond the scope of this article. The Citation XLS+ business jet fares well against its competition - so those operators in the market should find the preceding comparison of value.

Our expectations are that the Citation XLS+ jet for sale will continue to do very well in the pre-owned market for the foreseeable future- but it’s worth keeping a watch on how the new aircraft market develops – specifically how Cessna responds to the launch of the Learjet 70.