How do the Pilatus PC-24 and Cessna Citation CJ4 compare side-by-side? What are the advantages offered by each model? Mike Chase analyses the performance and productivity of these two Light Jet competitors. 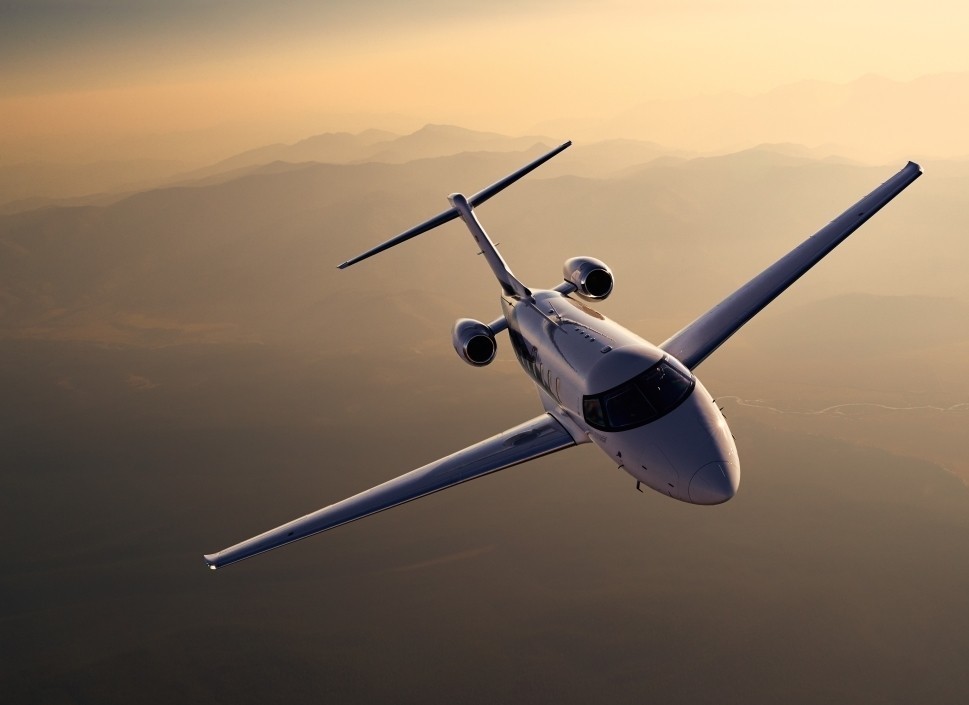 Over the following paragraphs we’ll consider key productivity parameters for the Pilatus PC-24 and Cessna Citation CJ4 for sale (including payload, range, speed, and cabin size) to establish which aircraft provides the better value in the Light Jet market. 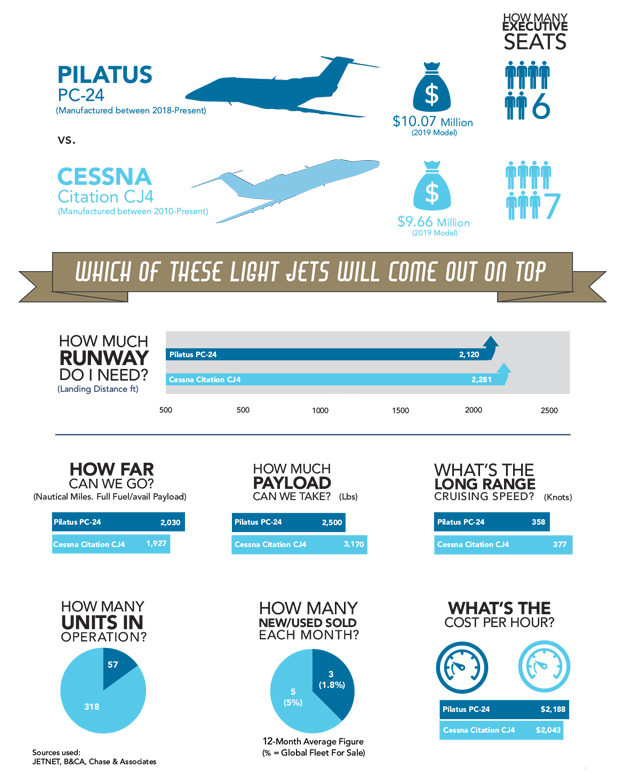 Pilatus PC-24
Pilatus Aircraft is the only Swiss company to develop, produce and sell aircraft to customers worldwide. To date, the OEM has over 1,650 of its venerable PC-12 turboprops in operation, many of which are utilized in Business Aviation operations. The Pilatus PC-24, however, is Pilatus’ first business jet model.
Designed with PC-12 customer feedback in mind, Pilatus sought to create a jet with increased range and speed compared to its turboprop model, while retaining the short runway capability. The resulting Pilatus PC-24 became the world’s first business jet that could be used on short, unmade runways.
The PC-24 received FAA and EASA type certification in December 2017 and is certified to allow single pilot operations. Deliveries started in 2018, and 57 jets had entered service at the time of writing. As many as 48 were wholly-owned. North America accounted for the largest fleet percentage (56%) at the time of print, followed by Europe (22%). 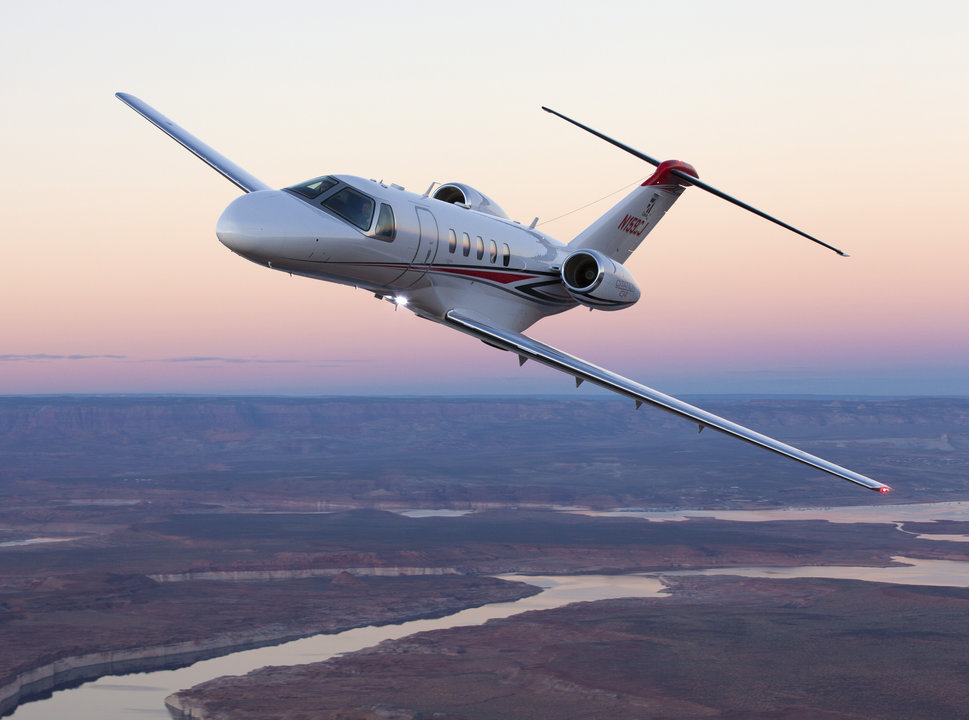 Cessna Citation CJ4
The Cessna Citation CJ4 (Model 525C) is a stretch extension of the previous CitationJet (CJ3) model. However, it differs most significantly compared to the previous models by incorporating a moderately swept wing design (borrowed from the larger Citation Sovereign).
The first flight of the Citation CJ4 took place on May 5, 2008, with deliveries starting in 2010. Since then 323 Cessna Citation CJ4 aircraft had been built (as of February 2020), and 318 of those were in operation around the world. Almost all are wholly owned, and just two had been retired as of this writing.
Of the 318 Cessna Citation CJ4s in operation, North America housed the largest fleet percentage (80%) followed by Europe (14%), accounting for a combined 94% of the world’s fleet.
Payload & Range Comparison
When comparing private jets for sale, an important area for potential operators to focus on is payload capability, and especially the ‘Available Payload with Maximum Fuel’. Table A shows the Pilatus PC- 24’s Available Payload with Maximum Fuel to be 715lbs, which is less than the 987lbs that is offered by the Cessna Citation CJ4.
TABLE A: Pilatus PC-24 vs Cessna Citation CJ4 Payload Comparisons 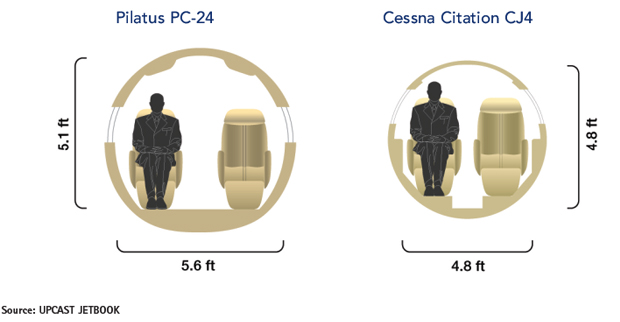 Overall, Pilatus’ PC-24 provides more cabin volume (501cu.ft.) compared to CJ4 (311cu.ft.). In terms of baggage provision, while the Pilatus PC-24 provides more internal luggage volume than the CJ4 (90cu.ft. versus 7cu.ft.), the CJ4 offers 71cu.ft. external space and the PC-24 has none.
Range and Landing Distance Comparison
As depicted in Chart B, using Broomfield, Colorado as the start point the Pilatus PC-24 offers greater range coverage (2,030nm) than the Cessna Citation CJ4 at 1,927nm, each flying with four passengers and available fuel.
CHART B: Pilatus PC-24 vs Cessna Citation CJ4 Range Comparison 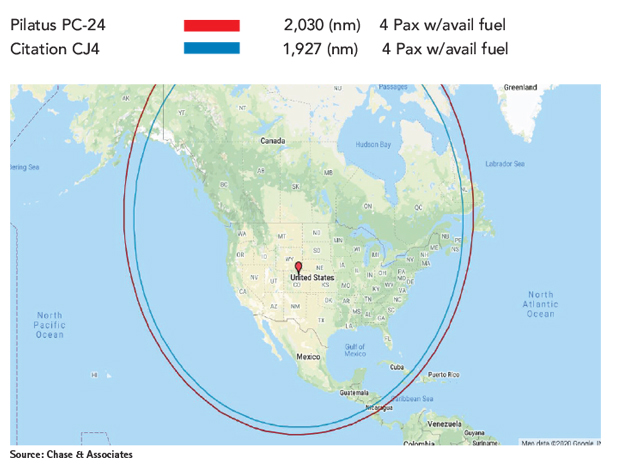 Note: For business jets, ‘Four Pax Range’ represents the maximum IFR range of the aircraft at long range cruise. NBAA IFR fuel reserve calculation is for a 200nm alternate. This range does not include winds aloft or any other weather-related obstacles.
Additional Note: Referring to Table A, with full payloads, the PC-24 range comes down to 1,206nm while the CJ4 covers 1,425nm. The landing distance for the Pilatus PC-24, meanwhile, is 2,120ft and the Cessna Citation CJ4 is 2,281ft in favour of the PC-24.
Powerplant Details
Two Williams FJ44-4A-QPM engines power the Pilatus PC-24, each providing 3,420lbst burning 160 gallons per hour (gph). The Cessna Citation CJ4 is also powered also by a pair of FJ44-4A engines, each offering 3,621lbst and burning 172gph.
Variable Cost Comparison
The ‘Variable Cost’, illustrated in Chart C, is defined as the estimated cost of fuel expense, maintenance labor expense, scheduled parts expense, and miscellaneous trip expense (hangar, crew and catering).
CHART C: Pilatus PC-24 vs Cessna Citation CJ4 Variable Cost Comparison

These costs DO NOT represent a direct source into every flight department and their trip support expenses. For comparative purposes, the costs presented are the relative differences, not the actual differences since these may vary from one flight department to another.
The Pilatus PC-24 shows a higher variable cost at $2,188/hr compared to the Cessna Citation CJ4 $2,043/hr; a difference of $145 (7.1%).
Table B contains the new prices (per B&CA) for a 2019 model Pilatus PC-24 and Cessna Citation CJ4. The long-range cruise speed and range numbers are from B&CA, while the cabin volumes, the number of aircraft in-operation, the percentage for sale, and average sold are from JETNET.
TABLE B: Pilatus PC-24 vs Cessna Citation CJ4 Comparison Infographic

The Pilatus PC-24 had one aircraft for sale on the used aircraft market at the time of writing, while 5% of the Cessna Citation CJ4 fleet were for sale on the used market. The average number of new and used transactions (units sold) per month over the previous 12 months for the Pilatus PC-24 is three, compared to five for the Cessna Citation CJ4.
Depreciation Schedule
Aircraft that are owned and operated by businesses are often depreciable for income tax purposes under the Modified Accelerated Cost Recovery System (MACRS). Under MACRS, taxpayers can use accelerated depreciation of assets by taking a greater percentage of the deductions during the first few years of the applicable recovery period (see Table C).
TABLE C: MACRS Tax Depreciation Schedule

In certain cases, aircraft may not qualify under the MACRS system and must be depreciated under the less favourable Alternative Depreciation System (ADS), based on a straight-line method meaning that equal deductions are taken during each year of the applicable recovery period. In most cases, recovery periods under ADS are longer than recovery periods available under MACRS.
There are a variety of factors that taxpayers must consider in determining if an aircraft may be depreciated, and, if so, the correct depreciation method and recovery period that should be utilized. For example, aircraft used in charter service (i.e. Part 135) are normally depreciated under MACRS over a seven-year recovery period, or under ADS using a twelve-year recovery period.
Aircraft used for qualified business purposes, such as Part 91 business use flights, are generally depreciated under MACRS over a period of five years or by using ADS with a six-year recovery period. There are certain uses of the aircraft, such as non-business flights, that may have an impact on the allowable depreciation deduction available in any given year.
The US enacted the 2017 Tax Cuts & Jobs Act into law on December 22, 2017. Under the new Act, taxpayers may be able to deduct up to 100% of the cost of a new or pre-owned aircraft purchased after September 27, 2017 and placed in service before January 1, 2023.
This 100% expensing provision is a huge bonus for aircraft owners and operators. After December 31, 2022 the Act decreases the percentage available each year by 20% to depreciate qualified business jets until December 31, 2026.
Table D depicts an example of using the MACRS schedule for a 2019-model Pilatus PC-24 in private (Part 91) and charter (Part 135) operations over five- and sevenyear periods.
TABLE D: Pilatus PC-24 Sample Tax Depreciation Schedule

Asking Prices & Quantity
The one Pilatus PC-24 business jet available on the used aircraft market at the time of writing didn’t list an ask price. By comparison, 16 Cessna Citation CJ4s were for sale and eight showed asking prices ranging from $4.995m to $8.495m.
While each serial number is unique, the Airframe Total Time (AFTT) and age/condition of an aircraft will cause great variation in the price of a specific aircraft – even between two aircraft from the same year of manufacture.
The final negotiated price remains to be decided between the seller and buyer before the sale of an aircraft is completed.
PC-24 vs CJ4: Productivity Comparison
The points in Chart D are centered on the Pilatus PC-24 and Cessna Citation CJ4. Pricing used in the vertical axis is as published in B&CA. The productivity index requires further discussion in that the factors used can be somewhat arbitrary. Productivity can be defined (and it is here) as the multiple of three factors:
Others may choose different parameters, but serious business aircraft buyers are usually impressed with price, range, speed and cabin size.
CHART D: Pilatus PC-24 vs Cessna Citation CJ4 Productivity Comparison 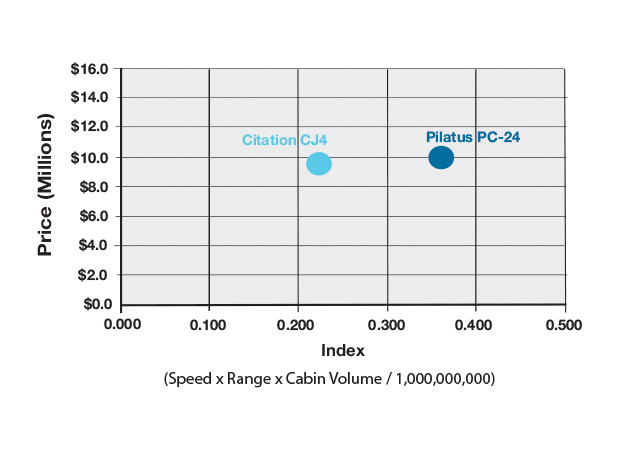 As of December 2019, the Pilatus PC-24 had a higher price than a Citation CJ4 ($10.071m vs $9.655m), and the Citation CJ4 exhibits a lower hourly variable operating cost with a higher long-range cruise speed (377kts vs 358kts) and Available Payload with Full Fuel.
Nevertheless, the Pilatus PC-24 offers a substantially bigger cabin volume, and longer range carrying with four passengers.
In Summary
Within the preceding paragraphs we have touched upon several of the attributes that business jet operators value. There are other qualities such as airport performance, terminal area performance and time to climb that might factor in a buying decision, however.
Operators should weigh up their mission requirements precisely when picking which option is the best for them. Ultimately, there is plenty for a prospective buyer to consider when deciding over which performance criteria is better suited to them in an aircraft.
The Pilatus PC-24 is relatively new to the market and offers exceptional range, cabin volume, and landing distance compared to its competitors, however, the Citation CJ4 has been a popular aircraft for a long time now, for reasons made clear in this comparison.

To see the latest light jets on the market, visit Light Jets for sale. 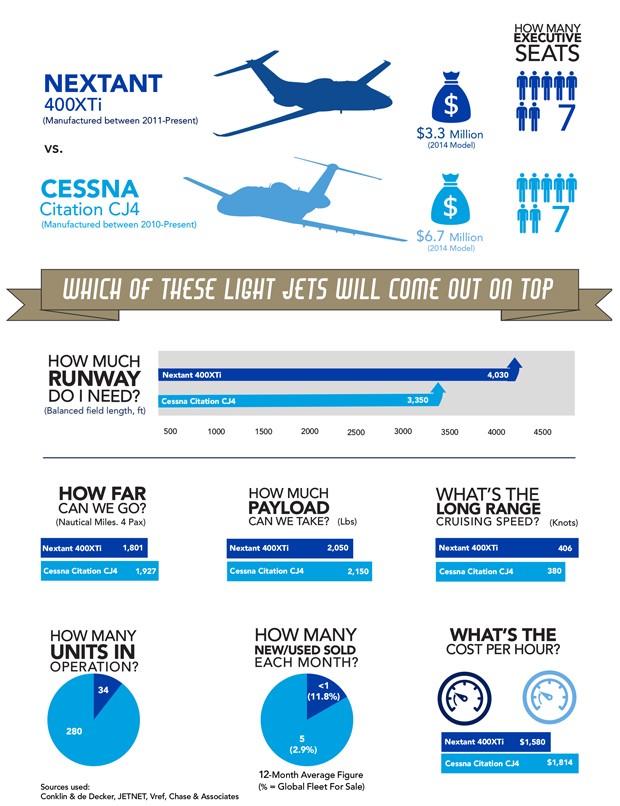 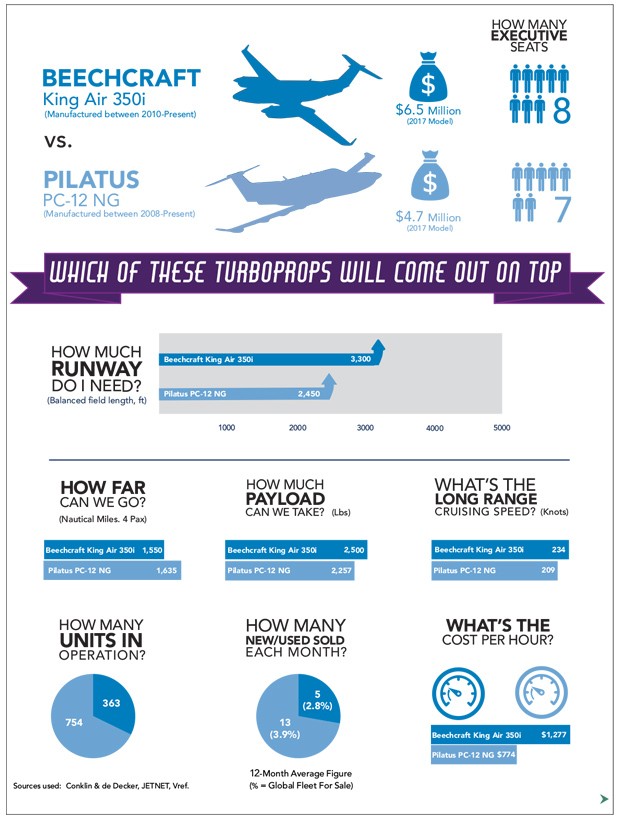 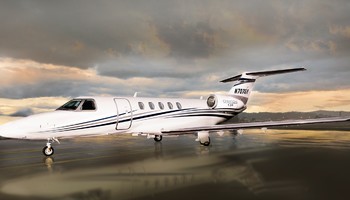 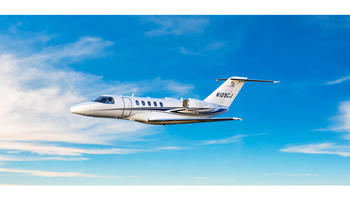