What makes the HondaJet a great proposition for today's Business Aviation marketplace? AvBuyer's Rohit Jaggi took to the air to find out...

On behalf of AvBuyer, Rohit Jaggi reports on his experience flying the HA-420 HondaJet. What makes this aircraft a great proposition for today’s marketplace? Find out here…

The HondaJet has a lot of things going for it: Backing from one of the giants of global engineering and manufacturing; impressive figures for speed and economy; a distinctive and novel shape that gives it undoubted ramp-appeal. But the real test of the success of Honda Aircraft Company’s HA-420 HondaJet will come in its sales and use.

Japanese parent Honda sunk a reported $2bn into creating this jet from scratch, and it has a lot to live up to. Born out of one person’s inspiration and drive, it is intended to appeal to the enthusiast flyer just as much as its economy, serviceability and speed are supposed to make it impossible to ignore for corporate flight departments and charter operators seeking an efficient business tool.

Michimasa Fujino, Chief Executive of the Honda Aircraft Company, who scribbled the outline of the aircraft on a scrap of paper in the middle of the night 20 years ago, sums it up.

“I wanted the aircraft to have the feel of a sports car,” adding that it also had to embody the cutting-edge technology, safety and efficiency that Honda cars stand for. 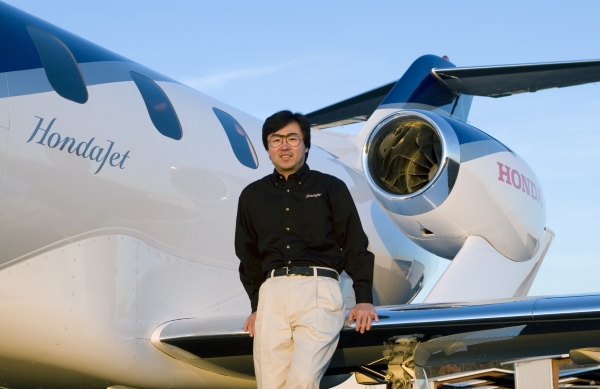 The aircraft he produced assembles a number of neat and efficient touches.

One is the most distinctive aspect of the aircraft - the engines mounted on pylons over the wings. Another is the natural laminar-flow nose and wings. And a third is the high level of assistance for the pilot in the cockpit.

The placement of the engines over the wings is remarkably faithful to Fujino’s sketch of two decades ago. The aim was to eliminate aerodynamic compromises forced by placing the engines on the tail, give more space to passengers and baggage in the fuselage, and cut down on noise and vibration in the cabin.

Before I had the chance to take the controls of the aircraft I made a couple of trips as a passenger. The cabin, well-lit by big windows that are electronically dimmable, has a quietly luxurious feel.

It is spacious, too – the standard layout of a club-four gives plenty of room for legs, and there is a fifth, sideway-facing seat available as an option across from the door.

The toilet compartment is also a healthy size, as well as being very private and naturally lit by a couple of strategic skylights. There’s an option for a sink with running water, and another for external servicing of the lavatory, but both add weight.

Meanwhile the baggage area in the tail is a vast 57 cu.ft., while another locker in the nose can accommodate 9 cu.ft. of luggage.

Before I climbed behind the HondaJet’s button-bedecked yoke, I got a taste of the training that is offered to buyers. As is usual, pilot training for the single-pilot-certified HA-420 jet is included in the aircraft’s price of roughly $5m, with normal options.

Honda, aware of the interest from owner-pilots, is determined to make the syllabus as easy to digest as possible. FlightSafety International, which has a building next to Honda’s at Greensboro’s Piedmont Triad Airport, has partnered with the aircraft manufacturer to provide training for all HA-420 clients.

Courses start with classroom training on the very capable Garmin avionics system and then lead into the Level D full-motion simulator – which is about as realistic as you can get without actually becoming airborne.

Climbing into the real aircraft later, there was one early disappointment: For all its many novel features, and despite its spacious cabin, getting into the left-hand seat still involves a leg-aloft step across the central console between the seats.

But once I was situated in front of the three huge 14.1 inch screens that are the windows into the customized Garmin 3000 system, the HondaJet was very inviting…

Checklists are on-screen, and a yoke-mounted control helps scroll through them. Two 5.7 inch touch screens are the main input devices for the system, and their placing low and central means they are not far from either pilot.

The underlying logic is for the avionics to handle what can be automated. For example, pressurization is fully automatic, with the end pressure determined by the planned destination’s elevation. Likewise, external lights come on when it’s dark outside.

That same logic means the dials, switches and controls that don’t need attention don’t ask for it – but show with a change of colour any abnormal state that does demand a response. It’s a dark cockpit concept that cars have also been moving toward.

Starting the two turbofans is even easier than starting an engine in a modern automobile – push the button helpfully labelled ‘start’ and let the electronics monitor the process and stop it if there is anything amiss.

I had noticed it in the back cabin earlier, but this jet is quiet. It’s the quietest in its class, according to Fujino. That, like the low cabin altitude of 8,000ft at its ceiling of 43,000ft will mean less stressful travel.

It didn’t take long to get to altitude, either. The 2,050 lbf from each of the GE-Honda HF120 engines gave us a brisk roll and take-off, and a maximum rate of climb of about 4,000ft per minute - so when air traffic control plays ball, there is little need to spend time at lower altitudes where the aircraft’s economy advantage is wasted.

According to Honda, the jet is up to 17% more fuel efficient than its light jet rivals.

Since most pilots will use it most of the time, I flew through the autopilot – which is easy to use, but hugely sophisticated. There’s even a default-on mode that, in the event of sudden decompression at altitude, will bring the jet (and its presumably unconscious occupants) down to a level at which they would come around and be able to take back control.

Nevertheless, I can’t imagine anyone who buys something billed as ‘an aerial sports car’ (complete with a class-leading 422 knot maximum cruise speed) not wanting to fly it themselves – so I extended a thumb to switch off the autopilot.

Fujino got it right: The HondaJet is crisp and precise, with a satisfying response from the twin turbofans and a pleasing harmony between the controls. Even with George-the-autopilot taking a rest there are still layers of protection – a stick shaker and a stick pusher protect against stall. On top of that there are visual and aural cues provided by the avionics to warn of over-speed and under-speed. Auto-throttles are not an option but are not missed.

Synthetic vision, which is an option, also helps enormously when flying the HondaJet manually. The flight path marker shows you where you are going to be long before you actually get there.

Returning to land, speed brakes can be extended to help overcome the aerodynamic slipperiness that Fujino worked so hard to incorporate in the design. But one by-product of the relatively small, low-drag wing is higher landing speeds than the jet’s closest – and slightly slower – rivals (the Embraer Phenom 100EV and Cessna Citation M2).

The market continues to be difficult for private jets, and especially those at the light end. But as a measure of its success, Honda delivered 30 jets in the first three quarters of 2017 (against 25 Citation M2s and 11 Phenom 100s).

Fujino, while refusing to discuss plans for further models, points to the fact that the size of the hangars at Greensboro is far bigger than needed for the height of the HA-420. And it is not the way of parent Honda to tread water.

For the moment, however, Honda Aircraft Company is concentrating on ramping up production of its HA-420 HondaJet – aiming to build 100 a year. If there is a pause, perhaps Fujino can use it to fulfil another long-held aim – learning to fly.