Embraer announced two new medium jets at NBAA-BACE2018 - but what makes them worthy of the title 'disruptive aircraft'? AvBuyer was in Orlando to discover more about the Embraer Praetor 500 and Praetor 600 business jets...

Jets for Sale Review
AvBuyer  |  15th October 2018
Back to Articles

AvBuyer was in Orlando, Florida to see Embraer unveil two new business jets - the midsize Praetor 500 and the super-midsize Praetor 600 jet. Both are positioned as “disruptive aircraft” targeted at the entrepreneur and the innovator.
Announced during NBAA-BACE 2018, both jets were available to view on static display in Orlando, and are upgrades on Embraer's current Legacy 450 and Legacy 500 aircraft.
Michael Amalfitano, president and CEO, Embraer Executive Jets, explained, “The Praetors are aircraft certainly in keeping with their name, leading the way in redefining the characteristics of what a midsize and super-midsize aircraft deliver to the market.”
Embraer Praetor 600
With four passengers and NBAA IFR Reserves, Embraer says the Praetor 600 will be the farthest-flying super-midsize business jet, which allows non-stop flights between London and New York. It will have an intercontinental range of 3,900nm.
Embraer will introduce the new premium style Bossa Nova interior edition aboard both jets. The Praetor 600 will include eight fully-reclining club seats that may be berthed into four beds for complete rest. 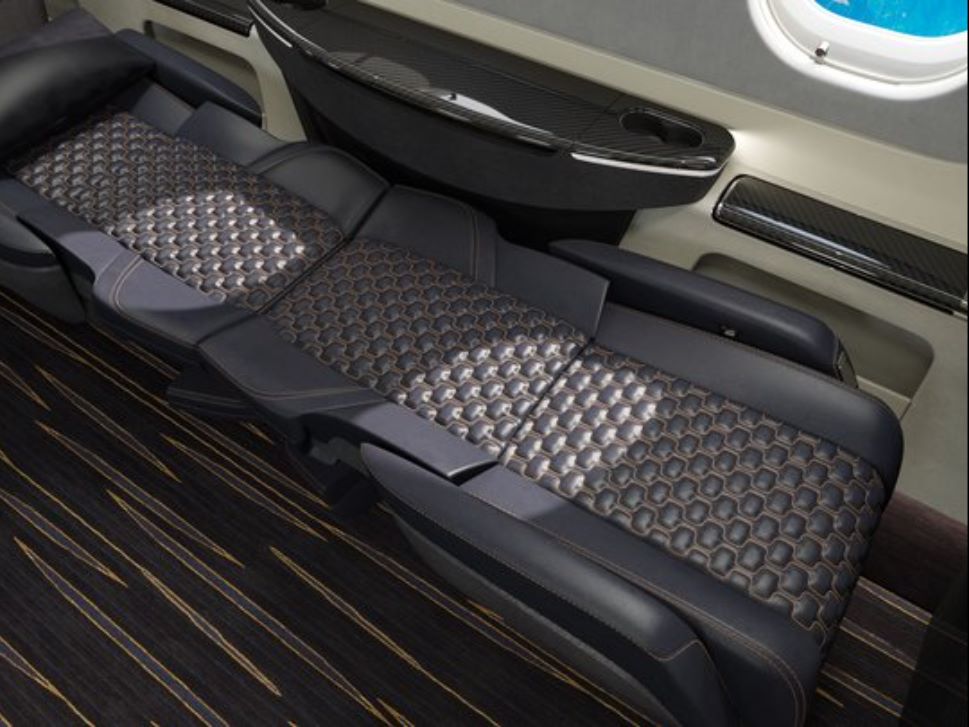 With a six-foot-tall, flat floor design, the spacious Praetor 600 cabin includes a refreshment center at the entrance, a rear private lavatory with a vacuum toilet and an in-flight-accessible baggage area. Total baggage space will be the largest in the super-midsize business jet category. 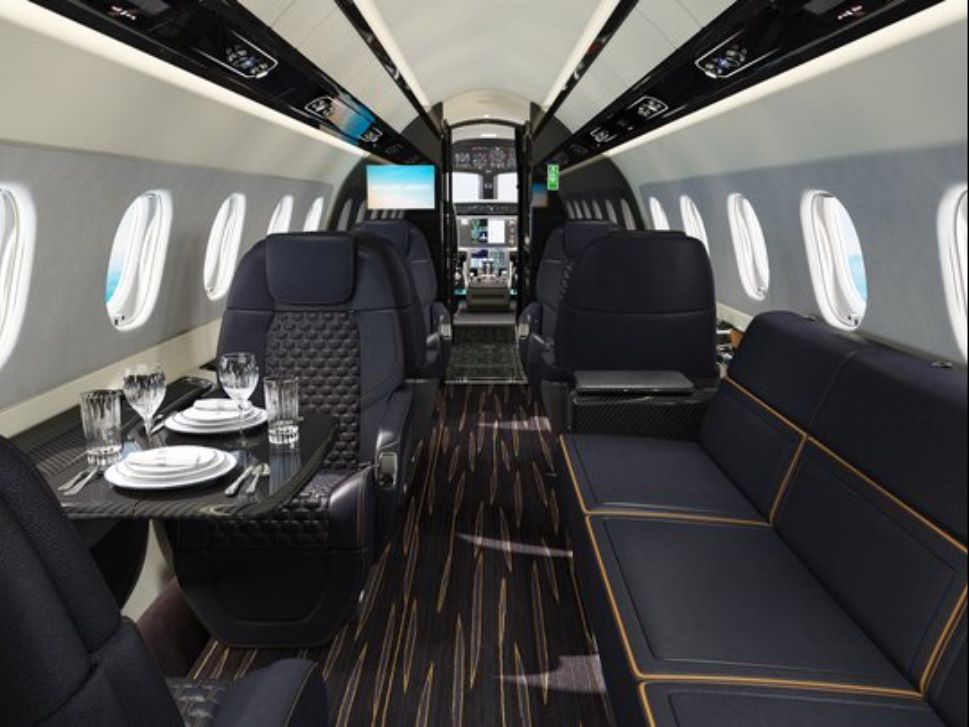 Embraer Praetor 600 Cabin
Advanced technology also abounds throughout the cabin of each jet.
The Praetor 600 includes the Upper Tech Panel that displays flight information and offers cabin management features also available on personal devices through Honeywell Ovation Select. Gogo AVANCE L5 and high-capacity high-speed connectivity for all aboard is available through Viasat’s Ka-band and IPTV.
Embraer Praetor 500
The Praetor 500, meanwhile, will lead the midsize class with a continental range of 3,250nm, says Embraer, and is expected to become the fastest midsize aircraft, capable of reaching Europe from the west coast of the US with a single stop.
Its cabin will include four fully-reclining club seats that can be berthed into two beds, and similar to its larger sibling the cabin includes a refreshment center at the entrance, a rear private lavatory with a vacuum toilet and an in-flight-accessible baggage area (the largest in the midsize category). 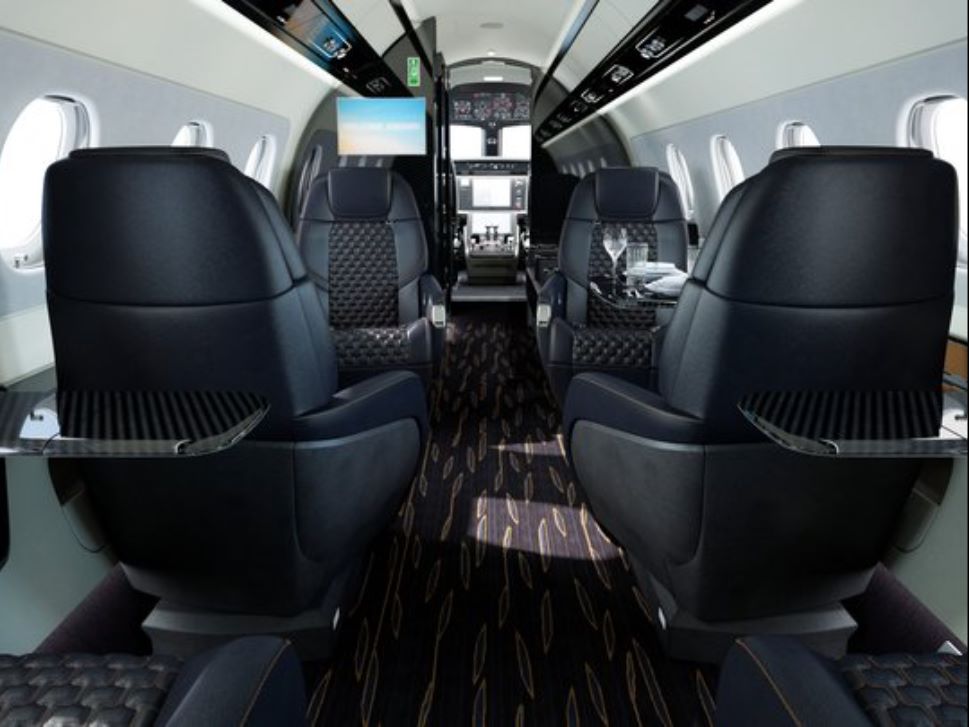 Embraer Praetor 500 Cabin
Advanced technology also includes the Upper Tech Panel that displays flight information and offers cabin management features also available on personal devices through Honeywell Ovation Select, and again, Gogo AVANCE L5 and high-capacity, high-speed connectivity for all aboard is available through Viasat’s Ka-band and IPTV.
State-of-the-Art
The Praetor 600 and Praetor 500 will feature the state-of-the-art Rockwell Collins Pro Line Fusion avionics suite with four 15.1-inch high-resolution LCD displays, and the Praetor 500 will be powered by a pair of advanced, fuel-efficient Honeywell HTF 7500E turbofan engines, the greenest in their class. 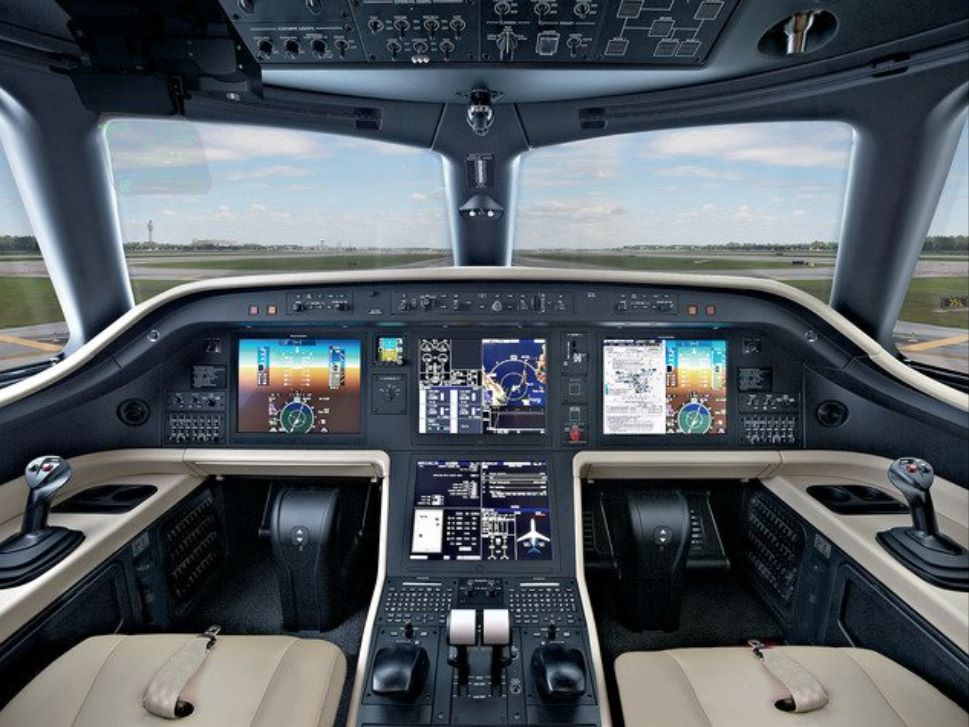 Both jets come with the promise of offering the highest payload capacities in their class and will become the only midsize business jets with full fly-by-wire technology and active turbulence reduction, enabling passengers to enjoy the smoothest possible flight.
Currently under development, two Praetor 600 prototypes are already in flight tests as well as one production-conforming aircraft, and one production-conforming Praetor 500 is in its maturity campaign. The Praetor 600 is expected to be certified and enter service in Q2 2019, followed by the Praetor 500 in Q3 2019.
“The new Praetor 500 and Praetor 600 jet will be the most disruptive and technologically advanced aircraft to enter the midsize and super-midsize categories,” promises Luciano Froes, Senior Vice President, Marketing, Embraer Executive Jets. “Different by design and disruptive by choice, these new aircraft will deliver the ultimate customer experience with an unparalleled combination of performance, comfort and technology.”
Read More: