Asset Insight’s August 31, 2020 market analysis revealed a second consecutive monthly inventory decrease to the tracked business aircraft fleet, along with a 2.1% Ask Price increase. Which models were impacted the most? Tony Kioussis explores…

Tony Kioussis is president of Asset Insight. The company provides audit and valuation services and has... 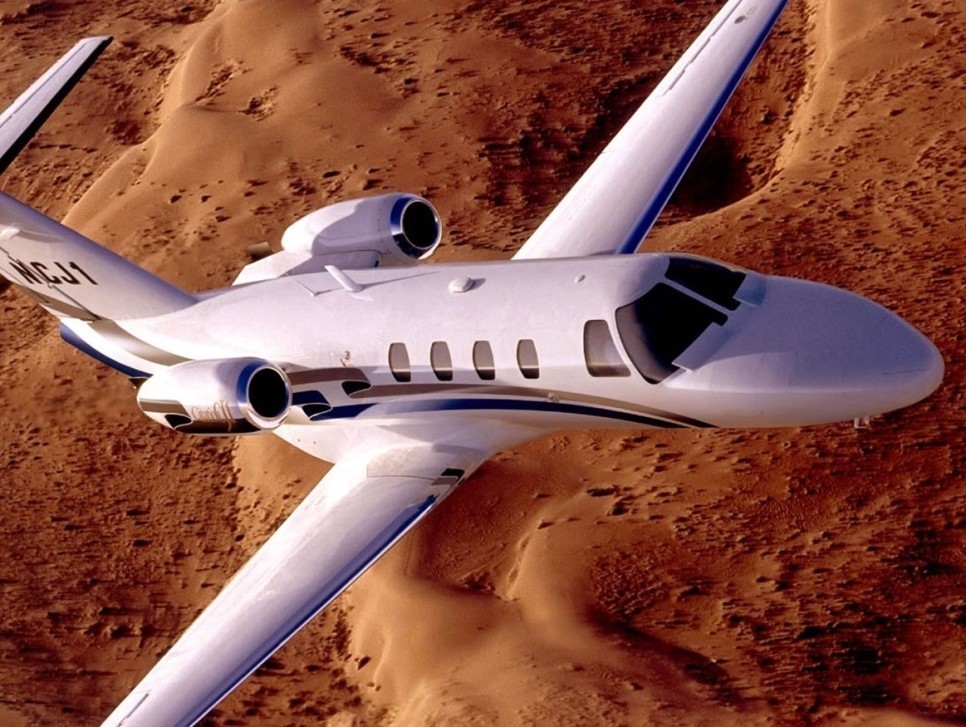 As August ended, Asset Insight’s tracked fleet of 134 fixed-wing models and 2,281 aircraft listed for sale equated to a 2.1% inventory fleet decrease compared to July, reducing the year-to-date (YTD) increase to 4.5%...

Moreover, the tracked fleet’s Quality Rating increased 0.7%, posting a 12-month best figure, and the latest ‘for sale’ fleet mix registered a 0.2% decrease to the anticipated cost for upcoming maintenance events. August’s 5.329 Quality Rating moved the inventory further into the ‘Excellent’ range on Asset Insight’s scale of -2.5 to 10.

The average Ask Price increased 2.1% in August, reducing the tracked fleet’s value decline since the start of 2020 to 3.0%. By aircraft group, the figures were as follows:

Maintenance Exposure (an aircraft’s accumulated/embedded maintenance expense) decreased (improved) a nominal 0.2% in August to $1.416m, signaling upcoming maintenance for the latest fleet mix would be marginally lower. All four groups posted improvements (decrease) in August, including…

The inventory’s ETP Ratio fell (improved) to 70.9%, from July’s 71.2%, bringing the tracked fleet to a figure half way between its 12-month worst and average figures.

As the ETP Ratio decreases, the asset's value increases (in relation to the aircraft's price). ‘Days on Market’ analysis has shown that when the ETP Ratio is greater than 40%, a listed aircraft’s Days on the Market (DoM) increases, in many cases by more than 30%.

Excluding models whose ETP Ratio was over 200% during one of the previous two months (considered outliers), following is a breakdown of the business jet and turboprop models that fared the best and worst during August 2020. 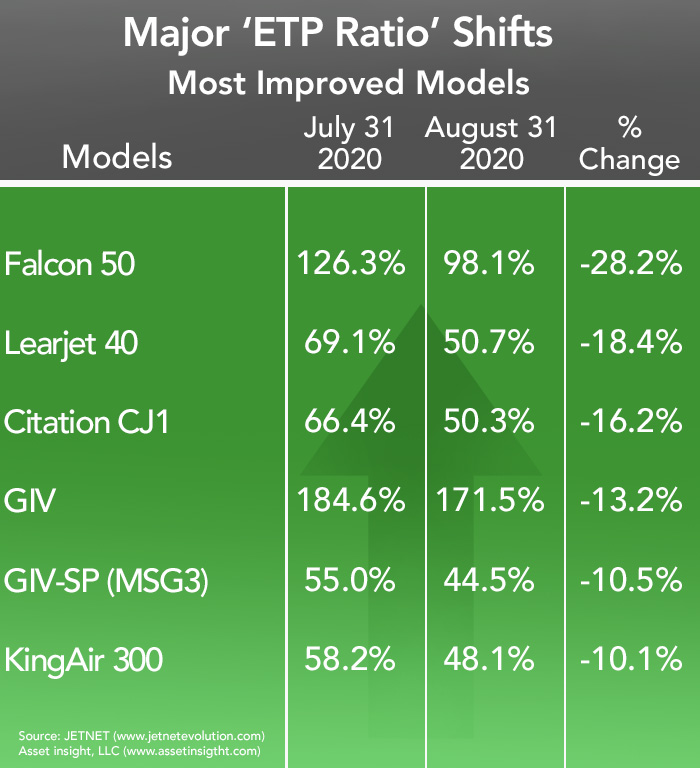 All six ‘Most Improved’ models posted a Maintenance Exposure decrease (improvement). From an Ask Price perspective, the Citation CJ1 posted a $77,143 Ask Price decrease, while the Gulfstream GIV-SP (operated under MSG3 maintenance rules) had no Ask Price change. The remaining models experienced the following price increases:

Capturing August’s top position among the ‘Most Improved’ models is the Falcon 50. Two aircraft transacted during August, two were withdrawn from inventory, and one was added to create the current mix of 20 units (10.8% of the active fleet).

Potential buyers need to keep in mind that these assets are now between 25 and 42 years of age. While the model made this list through a Maintenance Exposure decrease approaching $204k, along with an Ask Price increase exceeding $157k, the aircraft’s ETP Ratio, exceeding 98% should not be surprising.

However, for assets whose engines are enrolled on an Hourly Cost Maintenance Program (HCMP), the Falcon 50’s HCMP-Adjusted ETP Ratio (accounting for the program’s value) might well place the asset below the 40% excessive Maintenance Exposure reference point.

We saw no transactions for this model during August, but one aircraft did join the inventory bringing the total to three (7.9% of the active fleet). The Learjet 40 made this list through a Maintenance Exposure decrease exceeding $71k, and an Ask Price increase approaching $403k.

However, a closer look shows that the recent addition to the inventory is priced nearly 54% higher than the other aircraft showing Ask Prices. Though placing the Learjet 40 on this list might not seem equitable, the figures don’t lie and Asset Insight’s analytics will always be objective. 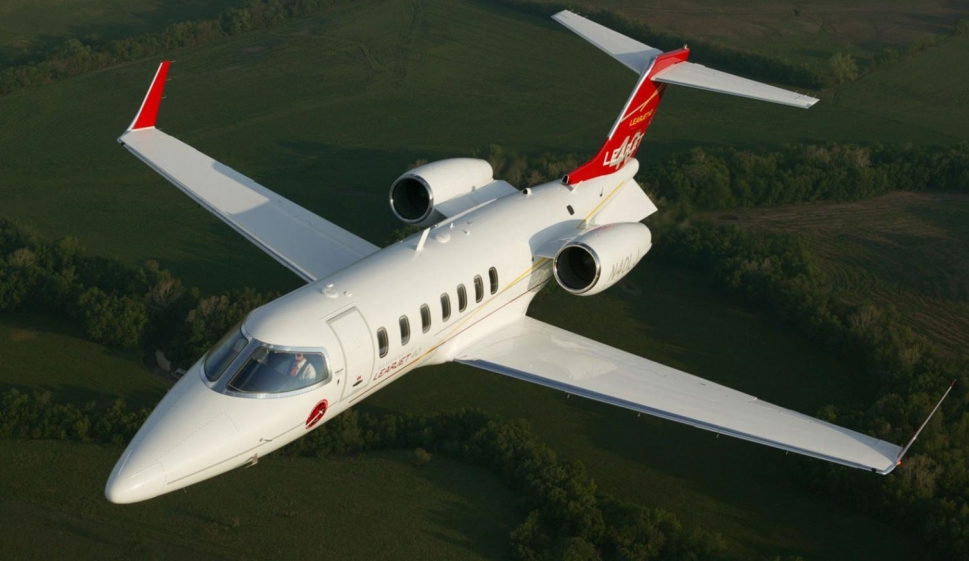 Third on this month’s ‘Most Improved’ list is a model that posted one sale in August and saw one aircraft enter the ‘for sale’ mix, maintaining a pool of 20 units (10.3% of the active fleet).

A Maintenance Exposure decrease exceeding $263k, along with an Ask Price increase of more than $77k earned the CJ1 its place on the list. The CJ1’s 50.3% ETP Ratio is surprisingly low for an aircraft aged between 15 and 20 years.

Next is a model that found itself in second worst position among July’s ‘Most Deteriorated’ group. Swapping to this list through a Maintenance Exposure decrease approaching $226k, and an Ask Price increase exceeding $23k, the GIV’s 171.5% will, nonetheless not improve most sellers’ challenges.

As if that were not enough, three transactions in August, an addition to inventory, and one withdrawal from the available fleet still left 20 aircraft listed for sale (12.1% of the fleet). As we mentioned previously, at the age of 27 to 34 years, this aircraft is beginning to approach financial obsolescence, so buyers must consider whether they’re purchasing a low-priced asset or one posing good value.

Dropping from the top of July’s ‘Most Improved’ list to fifth place on August’s list is an aircraft whose 44.5% ETP Ratio should allow ample opportunity for sellers to structure transactions of reasonable value. The model achieved its position through no change in Ask Price, no change in fleet composition, but a Maintenance Exposure decrease exceeding $683k.

As August ended, five aircraft were listed for sale, equating to only 5.6% of the active fleet. Did we mention that sellers should have ample opportunities to structure transactions…? Buyers will have to justify their offer if they wish to achieve a good price for an MSG3 GIV-SP.

The final aircraft to make the ‘Most Improved’ list did so thanks to a Maintenance Exposure decrease approaching $9k and an Ask Price increase exceeding $237k. During August, Asset Insight identified three sales.

With the 17 aircraft available to buy representing only 8.9% of the active fleet, the model’s strong following, and 48.1% ETP Ratio, the stage is set for buyers to structure value-based transactions that also provide good prices for sellers. 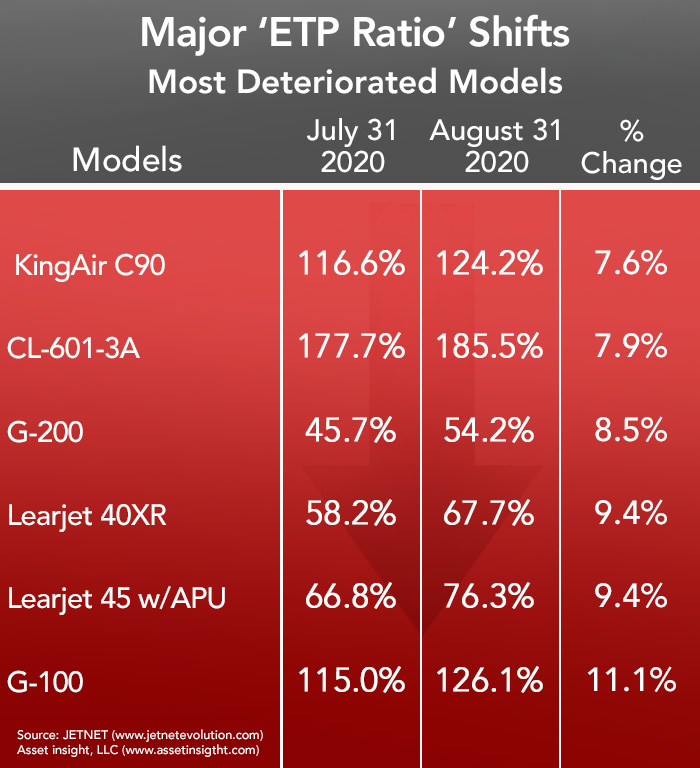 Four of the six models on August’s ‘Most Deteriorated’ list registered a Maintenance Exposure increase, while the Beechcraft King Air C90 posted an Ask Price increase of $4,008. The remaining models experienced the following price decreases:

For the second consecutive month, the best aircraft among August’s ‘Most Deteriorated’ assets held the second-highest position on July’s ‘Most Improved’ list. The C90’s fall from grace was caused by a Maintenance Exposure increase exceeding $41k overshadowing a $4k Ask Price increase.

Three aircraft sold in August, two joined the inventory, one was withdrawn from the available pool, and the remaining 46 aircraft equated to 11.9% of the active fleet for sale. This model has a strong following, but the average aircraft’s 124.2% ETP Ratio does not place sellers in a strong bargaining position.

No stranger to this list, the CL601-3A recaptured a place in the ‘Most Deteriorated’ group thanks to a $169k Maintenance Exposure (would you believe) decrease along with a $165k Ask Price decrease.

Two aircraft transacted in August and the 19 remaining ‘for sale’ units equate to 16.0% of the active fleet. With an ETP Ratio approaching 186%, sellers have few bargaining chips – even if the aircraft’s engines are enrolled on a HCMP. 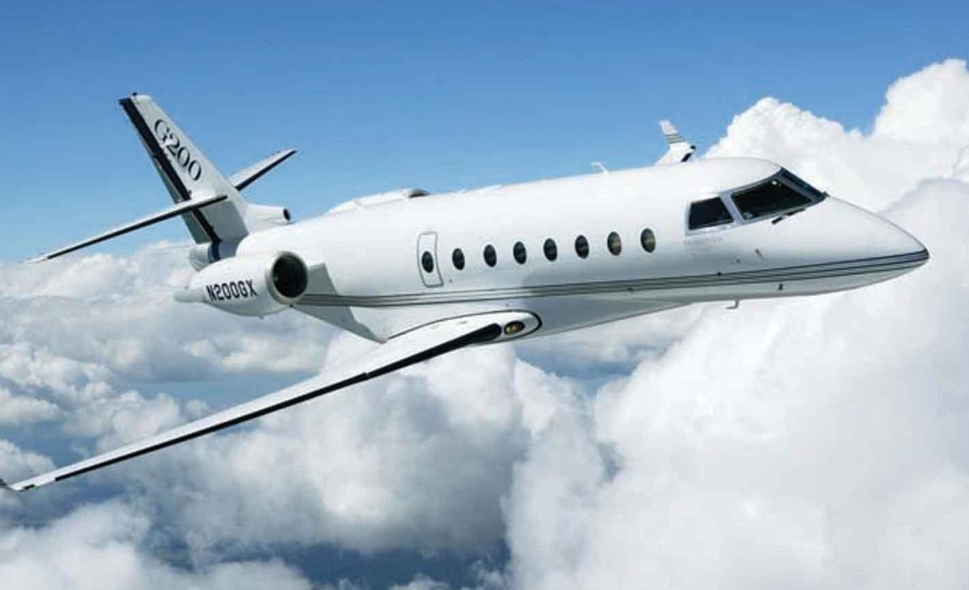 The third of four Gulfstreams occupying either list this month, the G200 posted one transaction during the month and three aircraft were withdrawn from the ‘for sale’ fleet. Still, that left 24 units available (10% of the active aircraft).

The news for both buyers and sellers is quite positive: Sufficient selection exists for buyers to negotiate a deal with good value, while allowing sellers the opportunity to negotiate a reasonable selling price.

The model posted a Maintenance Exposure increase exceeding $145k during August, along with an Ask Price decrease approaching $377k. With an ETP Ratio hovering around 54%, sellers with engines enrolled on a HCMP should see an adjusted ETP Ratio below 40%.

The second of three Learjets to occupy either of August’s lists attained its status through a Maintenance Exposure increase exceeding $64k and an Ask Price decrease approaching $182k. No aircraft transactions were recorded in August, but two assets joined the inventory increasing availability to 14.1% of the active fleet.

With an ETP Ratio approaching 68%, sellers with aircraft whose engines are enrolled on a HCMP will have better opportunities to remarket their aircraft at a reasonable price, and in a reasonable timeframe.

The Learjet 45XR (with APU) captured next to last place for some clear reasons. Its 76.3% ETP Ratio was caused by a Maintenance Exposure increase approaching $80k, along with an Ask Price decrease exceeding $92k.

As if that will not pose substantial challenges for sellers, the one aircraft that transacted in August was replaced by three additions to inventory. The 23 units now available equate to 27.4% of the active fleet. If you’re trying to sell one of these assets, you should carefully consider any offers you receive. 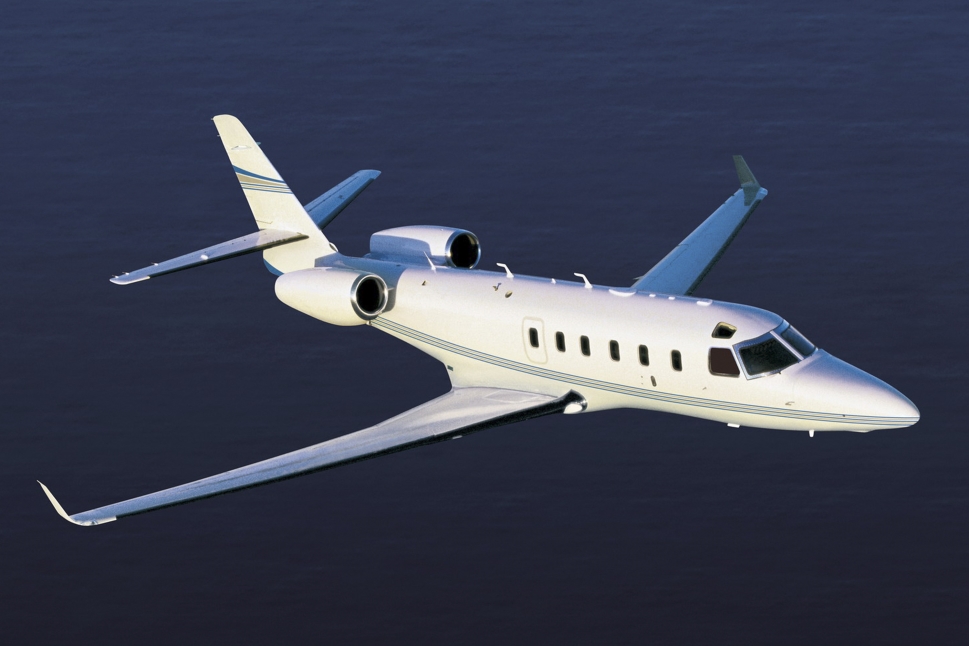 Dead last on August’s ‘Most Deteriorated’ list was the G100, an asset whose 126.1% ETP Ratio was driven by a Maintenance Exposure decrease (no, that is not an error) exceeding $18k and an Ask Price decrease of $197.5k.

It isn’t that a plethora of such aircraft are listed for sale, although the four in inventory (no sales in August) equate to 19.1% of the active fleet.

The problem for sellers is the limited production (22 units) and age of these assets (14 to 19 years), placing them in a space where competitive aircraft are newer and often viewed as more efficient. The few buyers seeking these assets are most definitely in the driver’s seat.

But as an aircraft’s value decreases, there will come a point when the accrued maintenance figure equates to more than 40% of the aircraft’s ask price. When a prospective buyer adjusts their offer to address this accrued maintenance, the figure is all-too-often considered unacceptable to the seller and a deal is not reached.

A wise seller needs to consider the potential marketability impact early maintenance might have on their aircraft, as well as its enrollment on an HCMP where more than half of their model’s in-service fleet is enrolled on one. 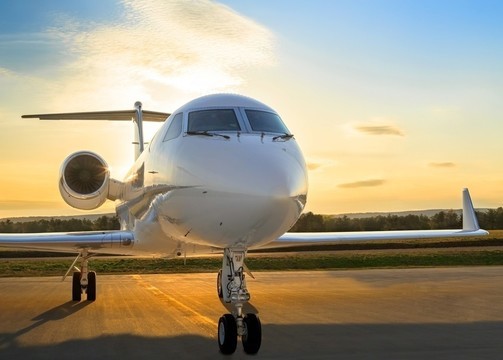 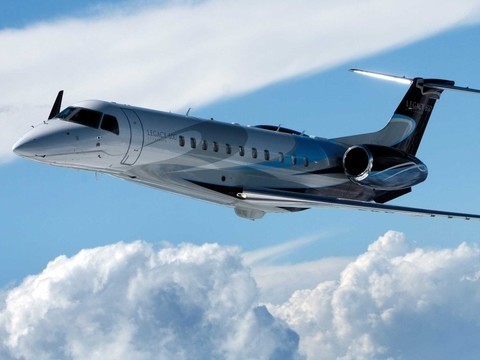 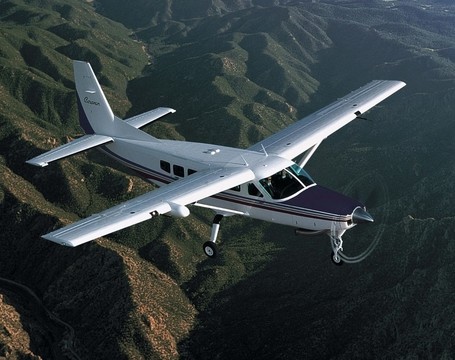 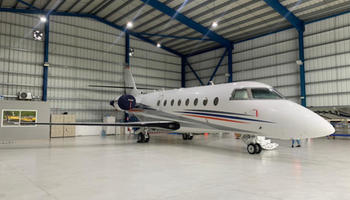 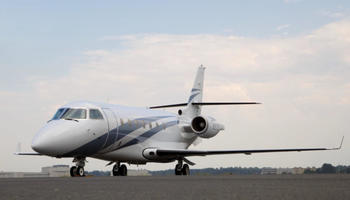 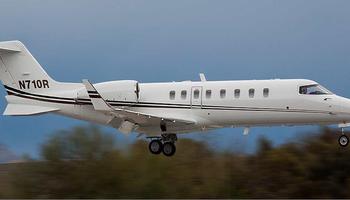 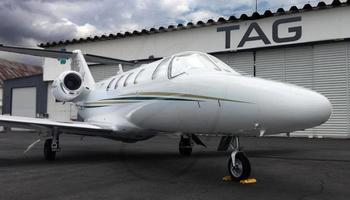 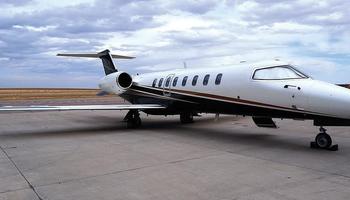 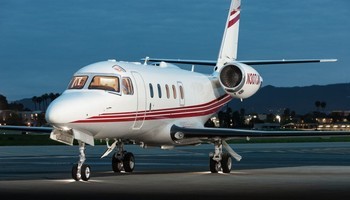 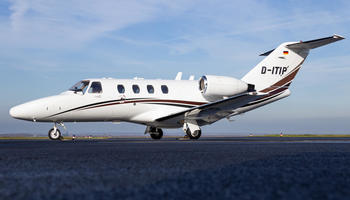 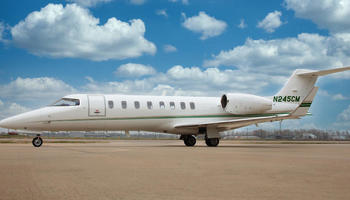 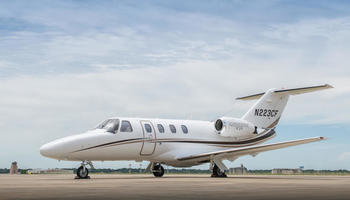 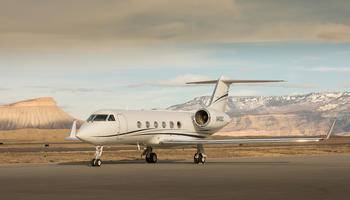 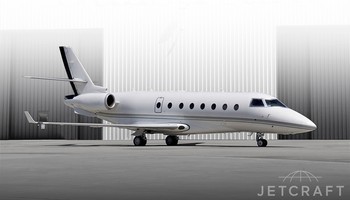 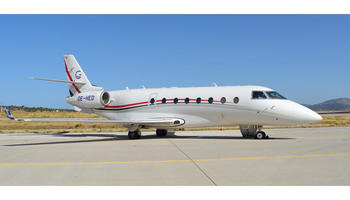 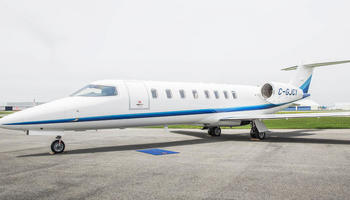 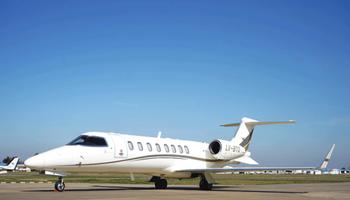