What are the Latest Business Jet Market Trends? 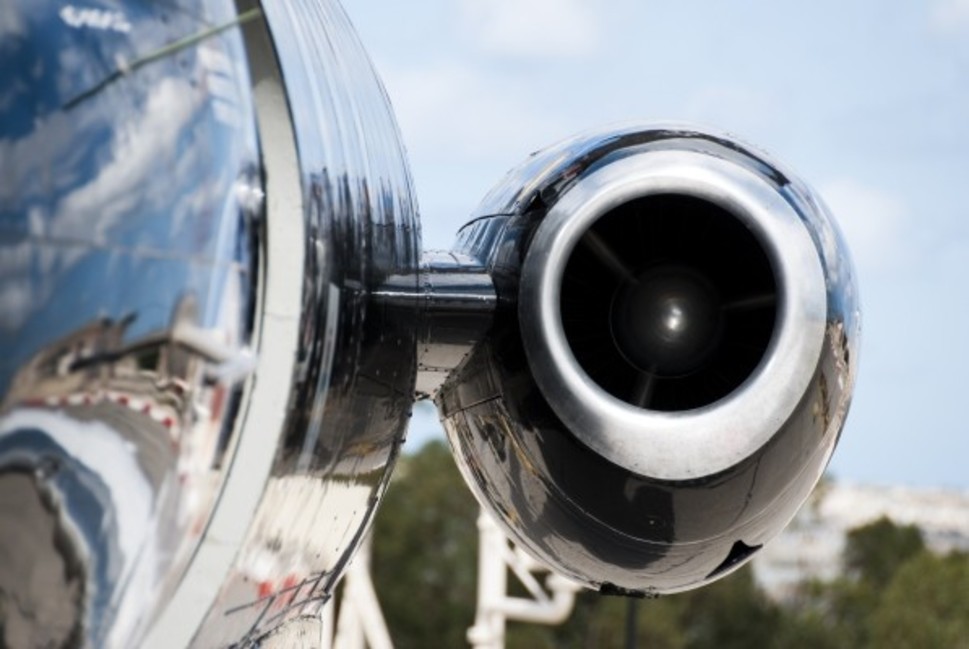 We’ve stated numerous times before in this column that new aircraft orders are traditionally based on the successful sale of pre-owned aircraft. We use the term ‘coupling’ to describe the trend in which an owner offsets a new aircraft purchase with the sale of a used aircraft. ‘Decoupling’, conversely, implies that owners may be simply holding on to their existing aircraft when purchasing new aircraft.

Thus, as we look at the market trends for business jets for sale today, we will investigate whether owners are choosing to continue flying their aircraft beyond their ‘normal’ upgrade cycle. Alternatively, are they purchasing new aircraft and trading in their older jet with an OEM, or signing exclusive agreements with brokers of pre-owned aircraft with the expectation of a sale?

The market value of business jets has been one of the key drivers for ‘Decoupling’. Unfortunately, the rapid decline in business jet market values has not recovered, and for those owners that purchased aircraft during the pre-2008 market-peak the result has been a major economic disappointment.

For those who have purchased a new aircraft post-2008, they probably have done so with cash. The majority (>70%) of buyers today are cash buyers, per US FAA Financial documents. Other sellers that have held on to their pre-owned business jets hoping that the ‘Great Recession’ would be followed by the ‘Great Recovery’ (in market value terms) that is just around the corner have been waiting for several years now…

We think that the bifurcation has disappeared and now we have New vs Used as a possible shift, especially with the rapid decline in residual value of new aircraft.

Additional dynamics at play could include OEM trade-in policies. As their individual order backlogs evaporated, they became more risk-adverse, thus accepting fewer trade-ins and perhaps offering less-than-favorable trade-in values. Such dynamics have certainly resulted in a “wait and see” mentality among the fence-sitters. Of course, there has been an increase in first-time buyers who do not have a previously owned aircraft to sell.

We can assume that many of the factors listed above all have played a part in this very slow and lengthy business jet market recovery since 2009. 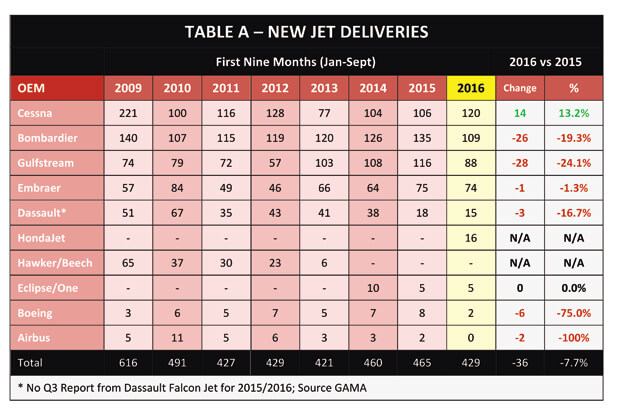 Textron’s Cessna is the only OEM showing an increase, up 13.2% compared to 2015, owing in part to new model introductions. Bombardier, Gulfstream and Dassault are all showing double-digit decreases versus 2015.

Overall, new business jet deliveries are lower today compared to 2015, but are at the exact same level as reported in 2012 (first nine months). 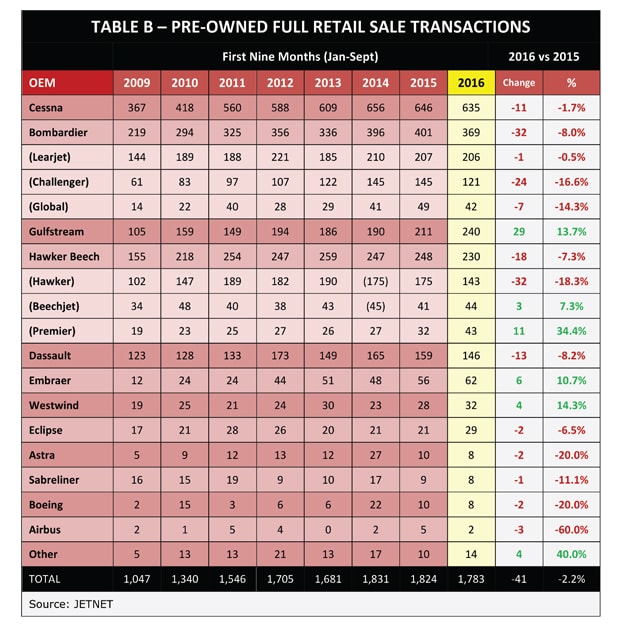 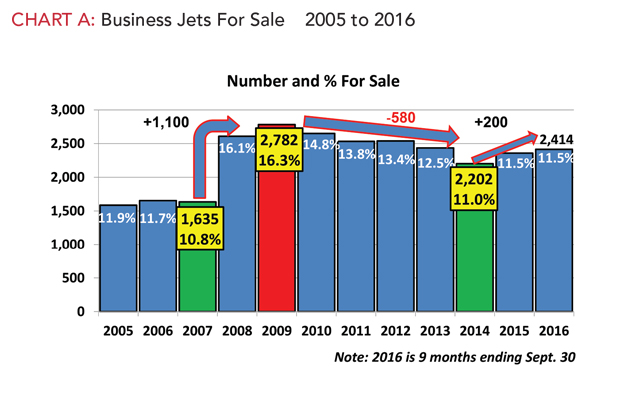 The average length of business jet ownership has increased since 2005 across all makes and models, as reflected in Chart B. Owners have held on to their aircraft because of the difficult economic times. 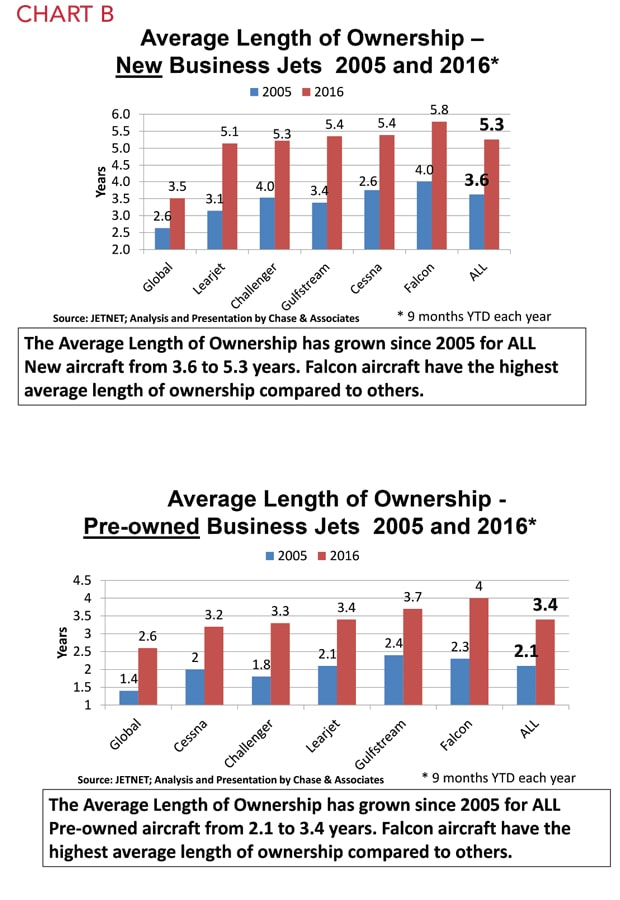 Several knock-on effects have resulted in the growth in average length of ownership, including the difficulty in securing new financing; the loss of value retention in aircraft; high ‘For Sale’ inventory levels; greater average days on the market; and (positively) better reliability and maintainability of business jets. Business jet usage (flight hours) has declined since 2008, mostly because business activity in general has been stagnant.

In years prior to the Great Recession, the industry used a 3-4% per year depreciation schedule to gauge future values for business jets. An aircraft lifespan is established by the OEM and measured not in years but in ‘pressurization’ cycles. Each time an aircraft is pressurized during flight, its fuselage and wings are stressed.

Has the residual value depreciation schedule changed today? One recent analysis suggested that there is now a higher percentage depreciation per year.

The economic useful life is the period of time over which an aircraft is (or is expected to be) physically and economically feasible to operate in its intended role. Periodic maintenance and repair will be required.

There is further evidence that aircraft with greater capability (e.g. range, speed and cabin volume), along with the new generation of avionics and enrollment on an hourly maintenance program, tend to retain value better. Those aircraft that do not possess these greater capabilities tend to lose their value retention.

Historically, the business jet market has been - and will continue to be - stimulated by new aircraft introductions. With each new aircraft model built there is a bump-and-run delivery cycle that occurs. The bump comes with first deliveries of a new model and is generated by the market excitement for the new model and what it has to offer. This in turn creates a backlog of orders that tapers off over time (the run) as the OEM ramps-up production to fill that new demand.

There are in excess of 16 new or derivative business jet aircraft models that have arrived (or will soon arrive) on the market, and over 30 in-production business jets. This fact, in our opinion, will help stimulate recovery and provide needed growth again in the business jet marketplace.

Of course, the World and US GDP growth must be stronger, and lower jet fuel-prices could do nothing but help. The missing ingredient is confidence from aircraft buyers. They hold the key to picking up the pace in both the used and new business jet market trends.