Will the wave of joint ventures seen in the commercial and regional airline markets spread to the business jet market? Mike Chase assesses the historic data and presses the case in his latest JETNET>>KNOW MORE feature… 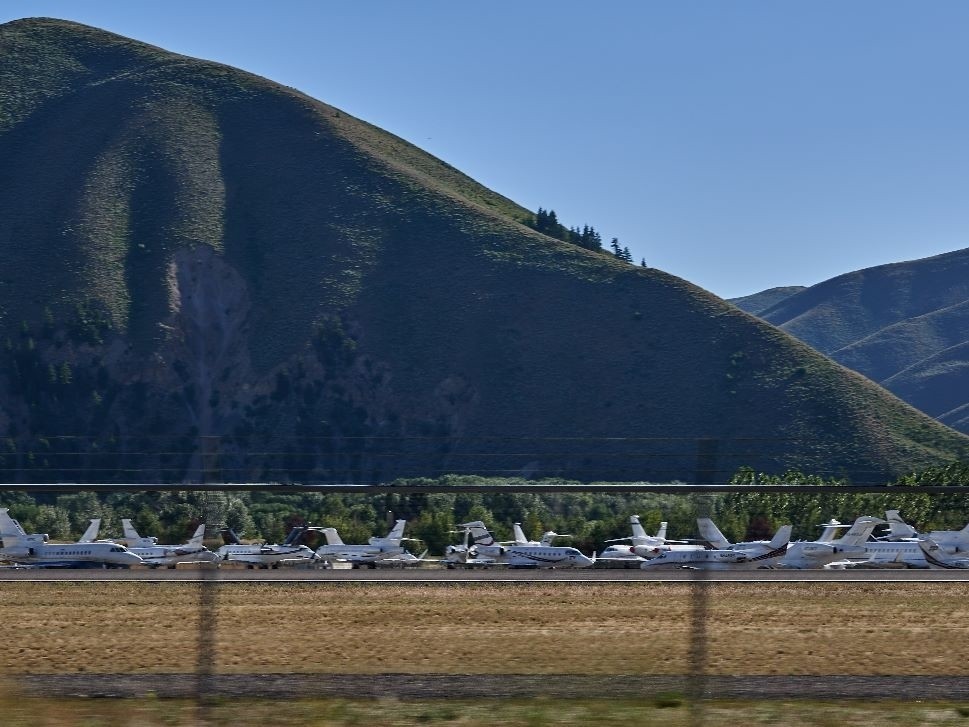 Will the wave of joint ventures seen in the commercial and regional airline markets spread to the business jet market? Mike Chase assesses in his latest JETNET>>KNOW MORE feature…
We have seen consolidation by Bombardier and Airbus, followed by Boeing and Embraer in recent months within the regional airline market. The hot question within the industry is whether we’re likely to see this same trend emerge in the business jet marketplace.
Since 1955, business jet OEMs have seen a reduction in the number of companies from 24 to 13 today. Behind the reduction has been a mixture of ceased production and consolidation. Nevertheless, we have experienced an expansion in the last decade of new and upstart business jet OEMs in the Entry Level (Light and Very Light) jet market.
Table A displays the long history of business jet manufacture, spanning 60 years. 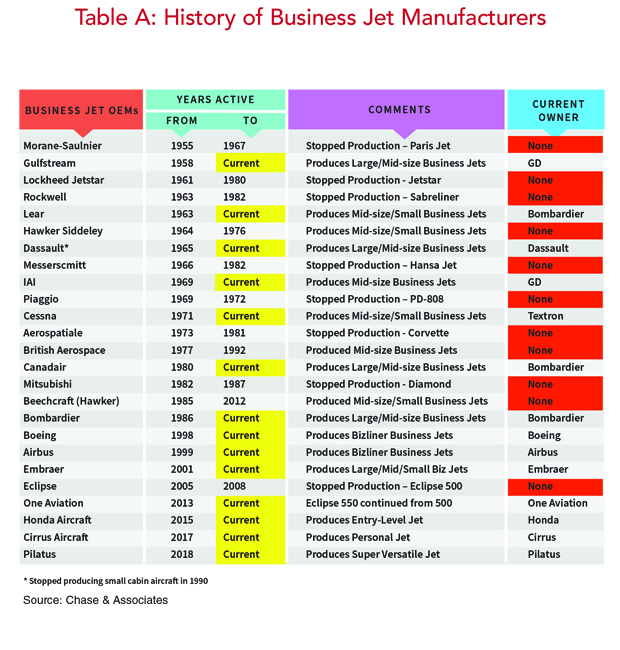 Following the emergence of the early business jet manufacturers in the 1950s, the 1960s saw eight new entrants join the market; three in the 1970s; four in the 1980s; two in the 1990s; two in the 2000s; and four since 2010.
Over this long history 11 OEMs (including Eclipse that restarted as One Aviation) ceased production. However, several purchased other OEMs, including General Dynamics (Gulfstream and IAI); Bombardier (Learjet and Canadair); and Textron (Hawker Beechcraft and Cessna).
Business Jet Industry Consolidation
A more in-depth review of the past 60-years reveals several consolidations that happened, as depicted in Chart A.
By the turn of the millennium and across the ensuing years, there have been many new and derivative business jets entering the market. Relatively clear categories, based on range, MTOW, cabin size and seating capacity (for example) became increasingly blurred, and today significant product overlap exists.

Manufacturers further segmented the market of Business/Corporate Aviation, building business jets for public and private companies as well as wealthy individuals (including individual owner pilots).
Moreover, the business of building business jets has grown increasingly global with six OEMs from the US today (including Cessna, Gulfstream, Boeing, One Aviation and Nextant) and seven Non-US (including Bombardier (Canada), Airbus and Dassault Falcon Jet (France), Embraer (Brazil), Pilatus (Switzerland), Cirrus (China) and Honda (Japan)). Nevertheless, all have operations in the US, from manufacturing and completions to service support.
Models In-Operation Today, By OEM
The current number of business jet models in operation today, according to JETNET, is 223. Table B lists the number of models in operation today by manufacturer. 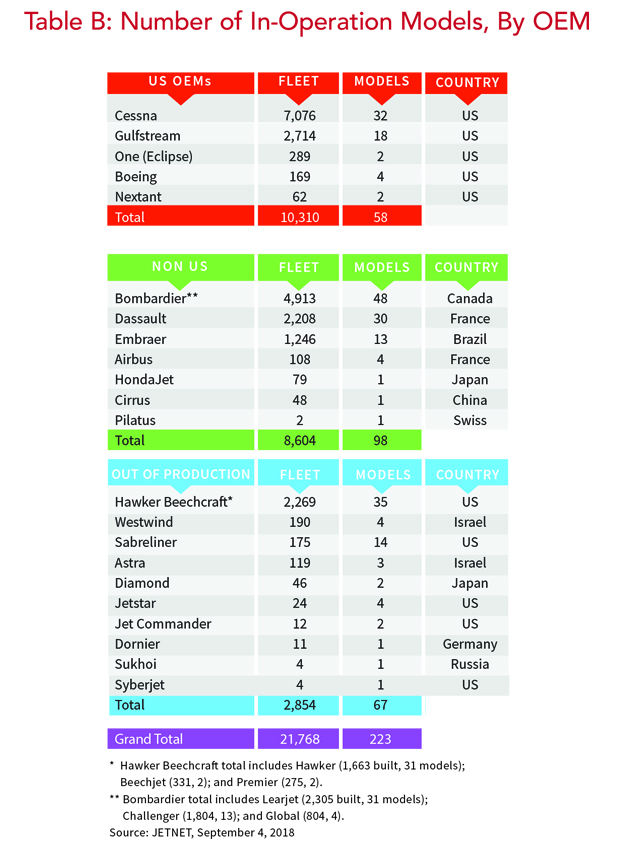 Emerging Business Jet Markets
The emerging countries often referred to as the BRIC (Brazil, Russia, India and China) combined have over 1,280 business jets. Table C provides a list of the Top 30 business jet-ownining countries, and the current number of business jets in operation for each.
The US accounts for 14,254 (66%) of the 21,768 business jets worldwide. Mexico is a distant second, while, highlighted in yellow are the BRIC countries of Brazil (Third), China (Eighth), India (Fifteenth), and Russia (Twenty-Sixth) based on the country of registration. 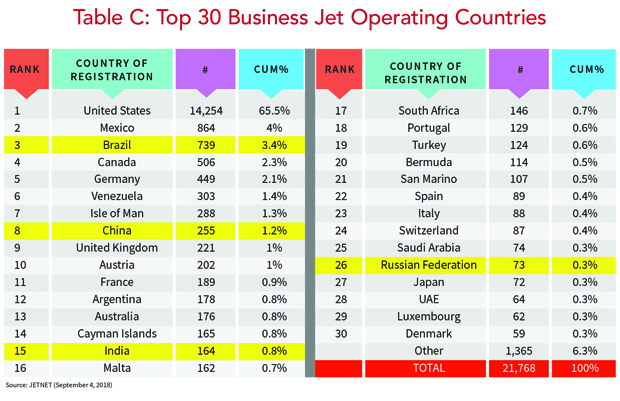 Note: Some owners of business jets from the BRIC and other countries may have chosen to register their business jet in other jurisdictions such as the Isle of Man (Seventh), Cayman Islands (Fourteenth), and Bermuda (Twentieth).
In Summary
New products have always stimulated growth in the market, and today as the business jet fleet approaches the 22,000 milestone a significant overlap exists between business jets available. The OEMs offer a wide spectrum of products ranging between single-engine personal jets to bizliners and very few niches in between remain to be filled.
While the consolidations between Airbus and Bombardier, Boeing and Embraer in the regional jet market has got people talking, historically the same has been occurring in Business Aviation. Ours is a crowded market currently.
Our expectation with the current market overlaps we are seeing is that we will indeed see some further tie-ups and consolidations in the future as the manufacturing industry continues to progress.
As we approach the 2020s, consolidation among the remaining OEMs could come about in a similar fashion to Textron’s acquisition of Hawker Beechcraft, which closed the Hawker business jet line (numbering 35 business jet models).
Our conclusion is that there are far too many business jet models in operation today.
We may also see opportunities develop quicker than most would predict from newly developing technologies in the electric engine (economically and environmentally-driven) and supersonic market segments, as new OEMs are entering these market sectors.
Accordingly, the answer to our opening question “What is the potential for Business Jet Consolidation?” would be ‘Very High’.
Of course, time will tell who will emerge successful. But as history shows, the potential for further consolidations and stopped production is an ever-present in Business Aviation.
In the meantime, we leave you with some sage advice from Abraham Lincoln. “The best thing about the future is that it comes only one day at a time.” 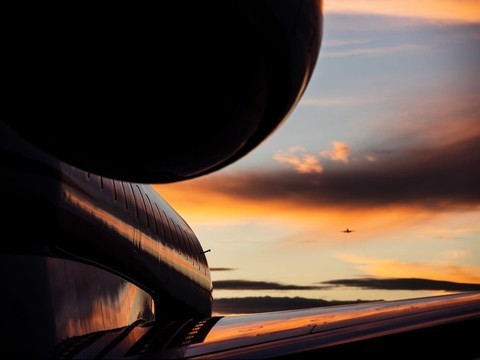 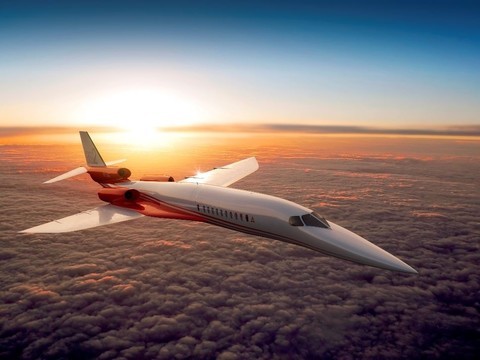 How Did Supersonic Travel Just Edge a Little Clo...