You’re sitting in an FBO on a dark and stormy night. The ramp outside where your Business Jet is to be dispatched from is both windand rain-swept- and (with the exception of your aircraft) is deserted. The night ground crew at this out-of-the-way/backwater FBO can provide toilet dump- fuel and oil services- but the resident transient dedicated aircraft maintenance crew left for their beds long ago - and of course- you have a flat tyre. 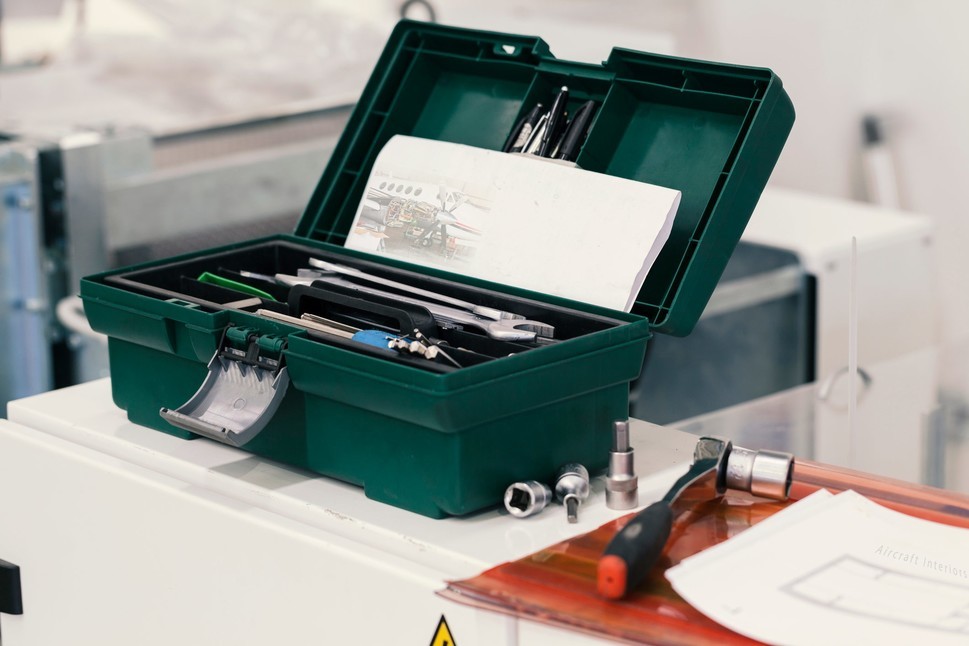 Fly-Away Kits:What are they- and why are they important.

You’re sitting in an FBO on a dark and stormy night. The ramp outside where your Business Jet is to be dispatched from is both windand rain-swept- and (with the exception of your aircraft) is deserted. The night ground crew at this out-of-the-way/backwater FBO can provide toilet dump- fuel and oil services- but the resident transient dedicated aircraft maintenance crew left for their beds long ago - and of course- you have a flat tyre.

This is no problem really because you carry a spare wheel assembly- jacking pads- tow-bar- spare bulbs- etc. with you onboard for all of these backwater trips- and both you and your co-pilot are A&P mechanics... but hang-on a minute- where is the axle-lift and bottle jack? [Fly-Away Kit.]

On another occasion- your company has taken delivery of a new aircraft- and you are babysitting the old aircraft while it goes through a pre-purchase inspection. One of the inspection items is to check that the Fly- Away Kit is complete and intact. Much to your surprise there are several items missing- and now several thousand dollars must be assigned to your work order for their replacement- to your embarrassment.

Unfortunately the above examples are fairly common. Worse yet- the concept of what a Fly-Away Kit should consist of- and how important it is to the safe operation of your aircraft (and also to its eventual resale value) is normally very- very low on an aircraft operators’ priority list.

Every aircraft on this planet has one or more special tools that are required for it to be operated and maintained properly.

These can be as simple as a set of jacking pads (removable screw or plug-in fittings that are shaped to slot into a hydraulic jack ram so that the aircraft can be raised)- or a Nosewheel steering disconnect tool (in the Falcon world it is often referred to as an ‘apple’ because of its shape). This tool removes or withdraws the locking pin that secures the onboard tiller steering system to the nose undercarriage leg.)

Some aircraft require more elaborate tools that must be carried onboard and are often only required during an emergency. Alternatively the required items might be simply engine and probe covers. To illustrate more fully the range of tooling typically found in a required Fly-Away Kit- the table above lists the items specified for the Dassault Falcon 50 aircraft.

One of the biggest gotchas that I regularly came across at the FAA Repair Station that I used to run (and sadly continue to run into today as a professional aircraft broker while providing oversight during a pre-purchase inspection) is the lack of aircraft- modifications-specific wiring diagrams and manuals. Even though these documents are not officially part of a Fly- Away Kit- I would like for everyone reading this article to start including these (and other documents that I will mention later) as must-have ‘Fly-Away Items.’

A case in-point happened just as I wrote this article with a Learjet 35A that was in pre-buy. The aircraft was well maintained and of a good pedigree- and wiring prints and manuals arrived for the pre-purchase inspection with the aircraft.

The Total Air Temperature (TAT) Probe (de-ice function) was found to be not heating. New Rosemount Pitot Tubes were installed several years ago to facilitate RVSM certification- and the drawings for the retrofit Air Data System did not include the new re-wire of the factory installed TAT Probe- placing the respective parties in the same position as they would have been if there were no prints available.

The bottom line is that the loss of such manuals equals both time and money to rectify - time and money that you would not have had to spend if you’d treated all the current and correct prints and manuals as ‘Fly-Away’.

LOGBOOKS…
Consider: You now own an aircraft for which some of the records (logbooks- airworthiness tags- etc.) were missing before you purchased the aircraft. You didn’t feel that it was a big-deal at the time of purchase- but now you have put the aircraft up for sale yourself- and the gap in the maintenance records history is turning out to be a huge deal - so much so that everyone that has come to look at your aircraft (and its records) have all so far independently walked away from the aircraft leaving you to shake your head and ask why the missing records are “such a big deal anyway?”

This problem becomes almost insurmountable when values are low- competition is high (lots of aircraft available for purchase on the market at the same time) and the economy is struggling with a tight money supply. Buyers just won’t bother themselves with a problem (or damaged) aircraft.

Even after buying the CD-Rom of the aircraft file held by the FAA Registry in Oklahoma City- on which you do not find any FAA Form 337 filed for damage repairs- it does not mean that damage doesn’t exist. You might search the NTSB website for any mention of your aircraft- or you might put a probing call into all aviation insurers and underwriters to determine if an insurance claim was ever made against your aircraft in its past. It will make little difference.

Regardless of your ‘zero’ findings of any culpability- missing logbooks and records pretty much leads a prospective buyer to the assumption that the aircraft was damaged during that time-gap- and was repaired either legally (repair stations are only required to quote a ‘Work-Order’ number in their entries- they are not required to file an FAA Form 337- and worse yet are not required to retain their records for more than two years); or illegally whereby the persons involved never had any intention of placing a record of damage repairs into the permanent records for this aircraft. Either way you lose financially. The question becomes ‘by how much’?

Quoting directly from Fletcher Aldredge’s Aircraft Value Reference (Vref) regarding damage history: “...Each incident is unique. There are many variables when dealing with damage history- but it is usually negative. How long ago did it happen? How extensive was it? What kind of airplane was involved? Who repaired it? Were the parts factory-new? These are some of the more important questions...”

If the damage was significant and very recent- then it is fair to place at least a 50% diminished value upon this aircraft’s head. This value loss can slide down to near- ‘zero’ as the calendar flips forward leaving the damage event further behind as nearancient history. Whenever records are missing and I am evaluating an aircraft for its market value- however- then I automatically deduct at least 10% from the value of the subject aircraft.

Remember that damage will most likely weaken or modify the structure in ways that may not manifest themselves as a danger to safe operation until many years- hours and cycles into the future- even if the repairs have been properly calculated- evaluated- blessed and certified by an engineer.

With this in mind- does it not make sense to include your aircraft records in your running inventory list of Fly-Away Kit items - even though they don’t actually ride on the aircraft every time that it flies?

‘JUST IN CASE’ ITEMS
Okay- let’s now move on and finish with the ‘just-in-case’ items that I believe should be on your permanent Fly-Away Kit manifesto- especially when you are planning a sortie into and out of an area where maintenance support is expected to be either minimal or absolutely none.

The first item on your list must be a trained and certified A & P mechanic with tools- on-board the aircraft. This person is your ‘Ace-in-the-hole’ to prevent you and your aircraft getting stranded.

Along with your maintenance staffer comes the need to carry some critical spares the absence of which would expose you to potential grounding for days (or even weeks) before replacement parts could be dispatched to your remote location.

Every aircraft is different- so you should consult your Master Minimum Equipment List for your aircraft- the aircraft manufacturer- and several other operators that you know who regularly travel into- and out of low support areas of the world so that you can compose your own ‘critical spares’ list. Yet all aircraft share similar technologies and therefore a list might look like the following generic list:

The bottom-line of the Fly-Away Kits discussion is as follows: Make sure that yours is complete.

Remember that what has been specified for your aircraft by its manufacturer is a minimum list- not the ideal list. Add to the manufacturer’s list with supplemental items that make the most sense to you - and lastly take digital images of all of your records.

Back them up. Lock the hard copies away in a waterproof and fireproof safe. See you on the flip-side.

â¯ Jeremy Cox draws on a wealth of experience as a pilot- an aircraft engineer/mechanic and an aviation writer. He currently serves as Vice President at JetBrokers- Inc - a professional aircraft sales company.