How to Successfully Complete a State BBJ

What did it take to complete a Boeing Business Jet on behalf of The Government of the Netherlands? ALTEA explains the process and challenges, and details the spectacular end product. 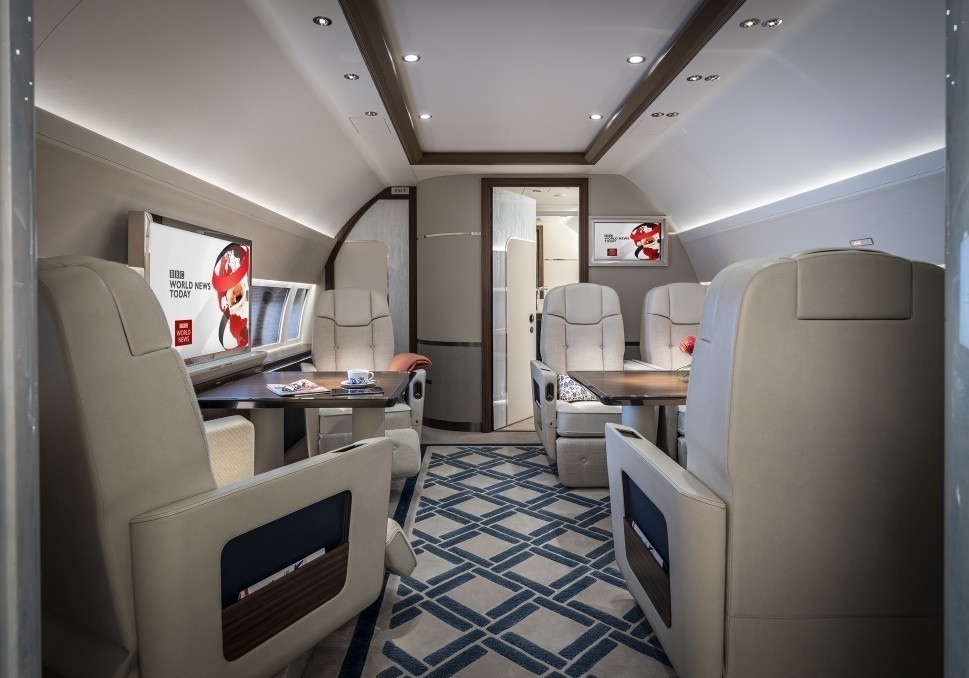 It’s rare to guide a customer from project conception through to product delivery, but that’s exactly what London-based consultant ALTEA did for The Government of the Netherlands with its new Boeing BBJ, PH-GOV recently. Here’s their story…
Although PH-GOV was delivered in June 2019, the project was conceived six years earlier in the summer of 2013.
ALTEA, a Business Aviation consultancy founded by Andrew Butler, Robin Dunlop and Jean Semiramoth, was initially responsible for mission-profiling their customer’s needs, as the Government’s nearly 20-year-old Fokker 70 was due for phase-out with the incumbent operator in July 2017 (later extended to July 2018). 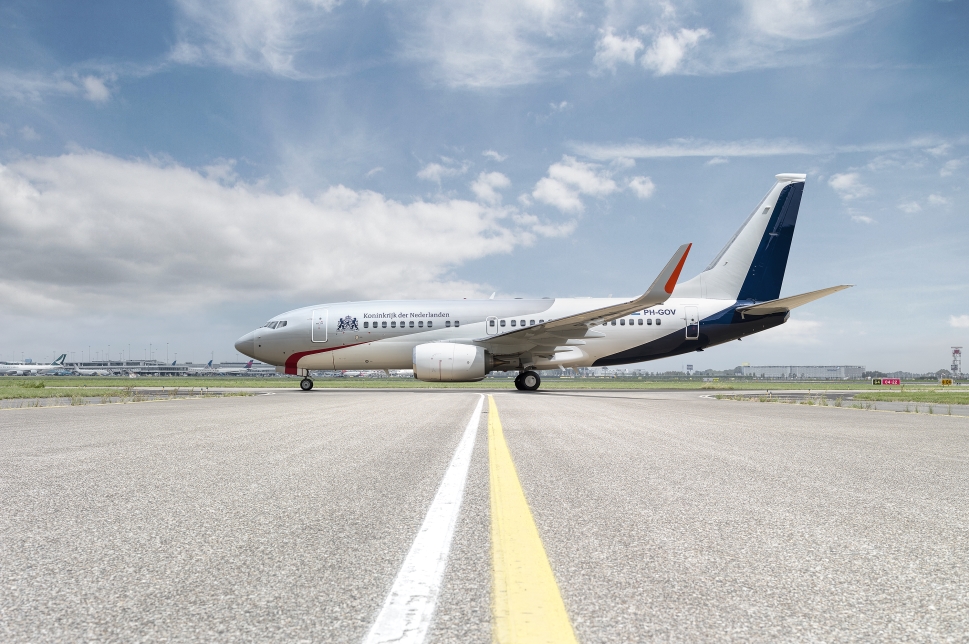 “We knew the customer required hands-on help and we knew our team had all the requisite skills,” Dunlop – who leads ALTEA’s in-house design team – recalls. “At that time, we thought ALTEA might have the opportunity to begin the process for them and perhaps become further involved. I don’t think we ever imagined we would be central in every stage of the process through to final delivery.”

Given ALTEA and the Government were required to follow rigorous European procurement rules to enable the purchase, this brought a further complex element into a project that was already tightly scrutinized, given funds were provided through the public purse. 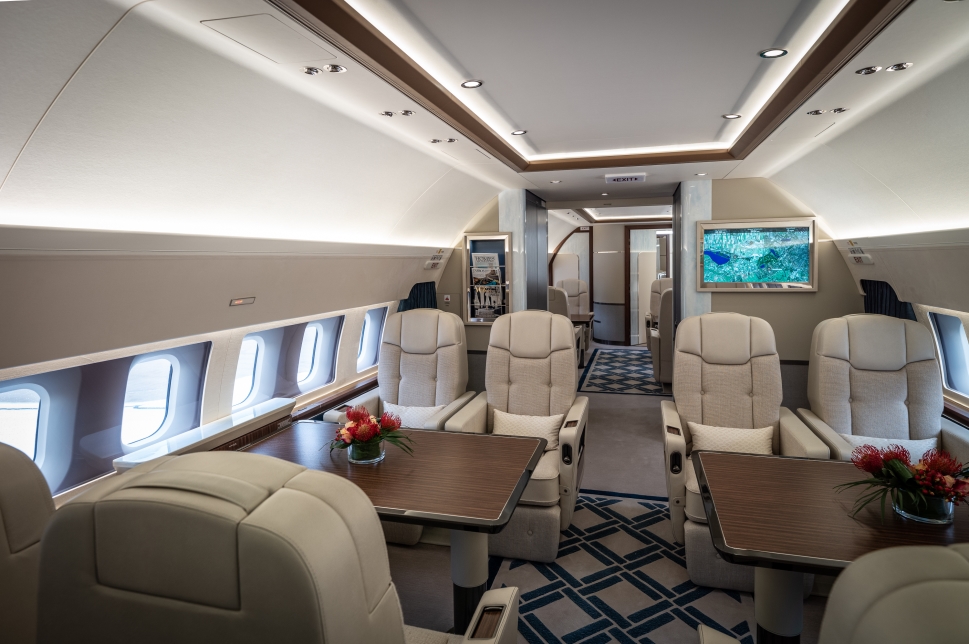 Mid Lounge Section
Intense Scrutiny
Semiramoth, ALTEA’s project manager throughout, explains, “Everything that we did was scrutinized intensely, not only by our customer but also by the Dutch Parliament and to a degree the media.” (Given ALTEA also successfully organized the sale of the much-loved Fokker 70 aircraft PHKBX, the media’s interest was palpable.)

Of course, this process came at the same time as specifying contractual terms for the new aircraft. And in the background, the design requirement was being run past Dunlop and his team.

“We had all these elements running in parallel against a backdrop of scrutiny that forced the team to totally focus on quality and on-time delivery without any flamboyance, given the delicate nature of the purchase,” Dunlop recalls. 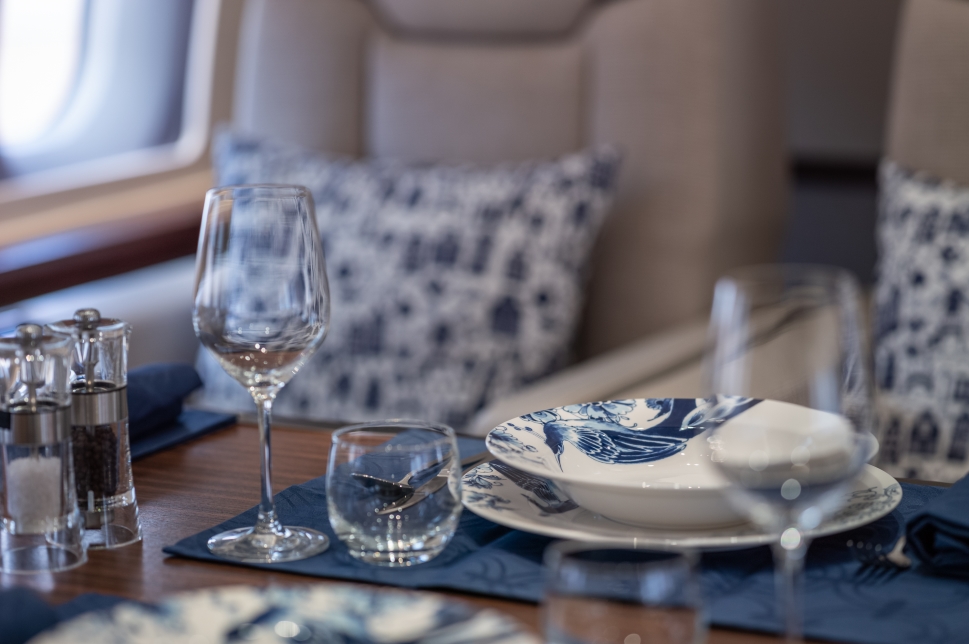 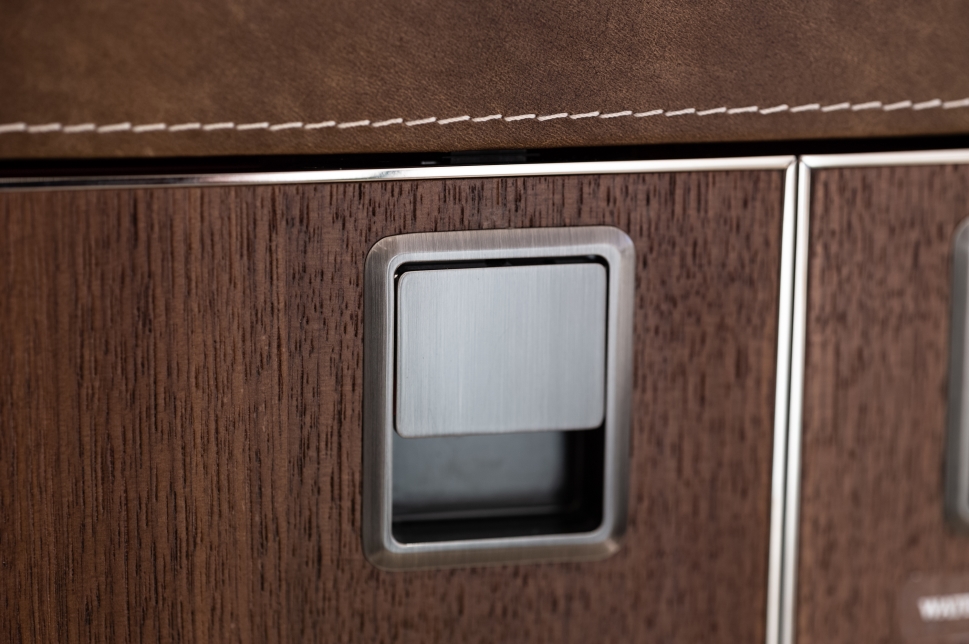 Fulfilling the Mission Requirement
The objective was to deliver a machine that was capable of fulfilling the required mission, namely to carry 28 passengers and crew some 12 hours non-stop – but also that could be used by various Government departments as a flying office whilst accommodating the needs of Royal family members for State visits.
“Balancing all of these elements was complex but something which we all relished given the high-profile nature of the project,” Semiramoth recounts.

The aircraft’s interior was completed by Fokker Techniek in the Netherlands – another twist to the story for the project, Dunlop explains. “The pressures on us and the completion center to complete a quality product on time was immense,” he says.

“Add to this the aircraft was being completed by a company ‘in-country’, this was another level of intensity for us all. Whilst our customer was always accommodating but firm, we, along with Fokker Techniek, knew that any major issue would be public knowledge – and that in itself was a reason to deliver on time, within budget.” 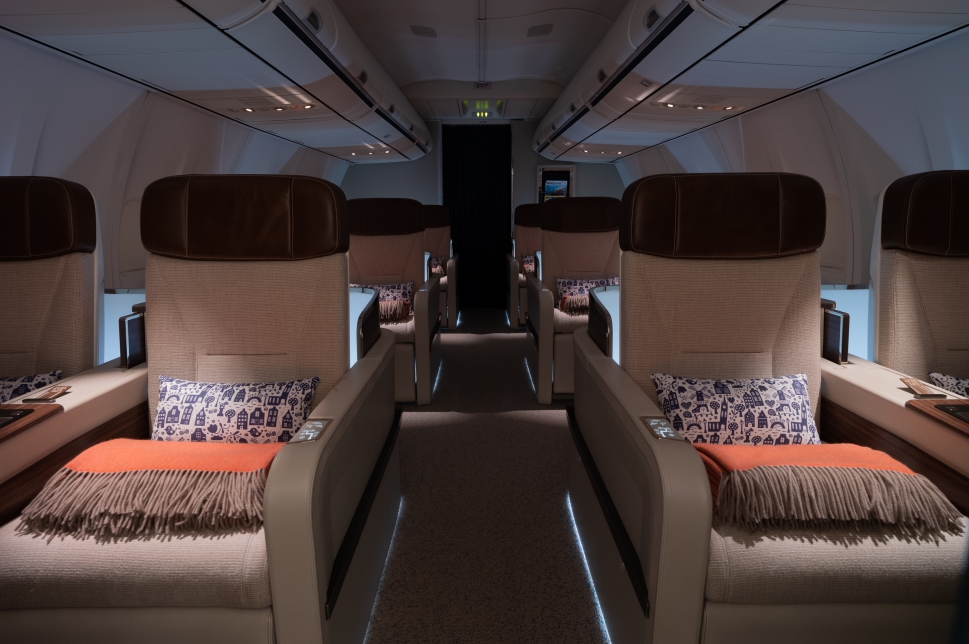 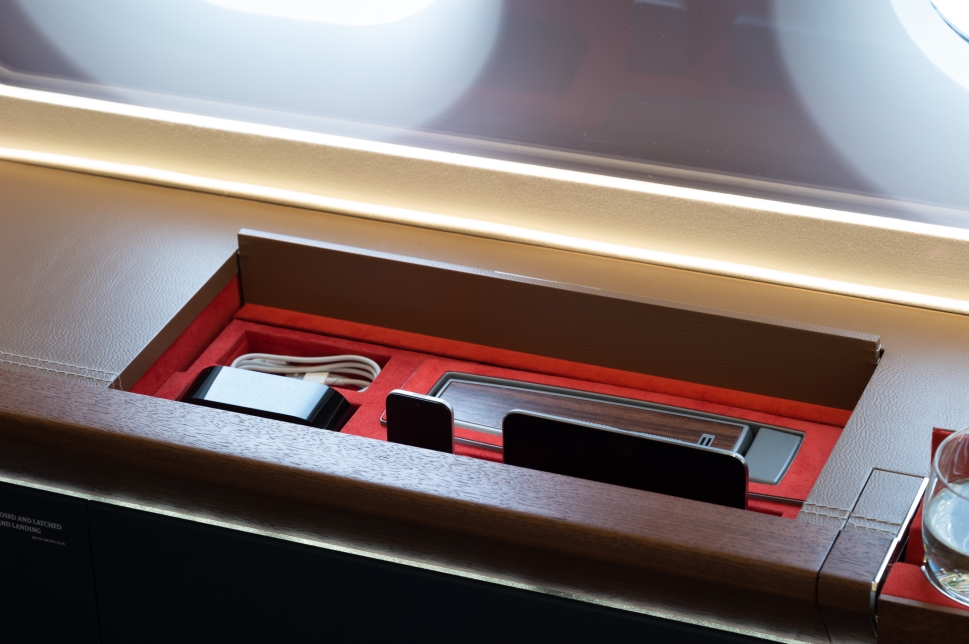 Managing Multiple Suppliers
The process of completion at Fokker Techniek, a center nominated by Boeing BBJ in this turn-key acquisition, is a little different from many other completion centers in that Fokker is almost completely reliant on an exterior supply chain that inevitably needs to be closely managed.
On this occasion the outside suppliers were responsible for galleys, cabin lining, all major monuments, seating, IFE, SATCOM and many of the soft goods. And each, of course, was responsible for delivering to specification. The delivery of an aircraft can be compromised if any supplier falls behind schedule or delivers a sub-standard product.

“Most of our team were on the road throughout completion, given the suppliers to PH-GOV were spread far and wide,” Dunlop explains.

“For example, cabinetry was done in Austria at Fuchs, whilst IFE was supplied by Astronics in Seattle, Washington. Our schedule was stretched a little, but we’re happy to report all major risks to schedule and budget were mitigated and our customer was not compromised in terms of quality.
“That is probably the greatest risk when completing aircraft interiors: When suppliers begin to rush their products to meet the schedule, then inevitably quality suffers. That was something we guarded against at every step throughout this project.” 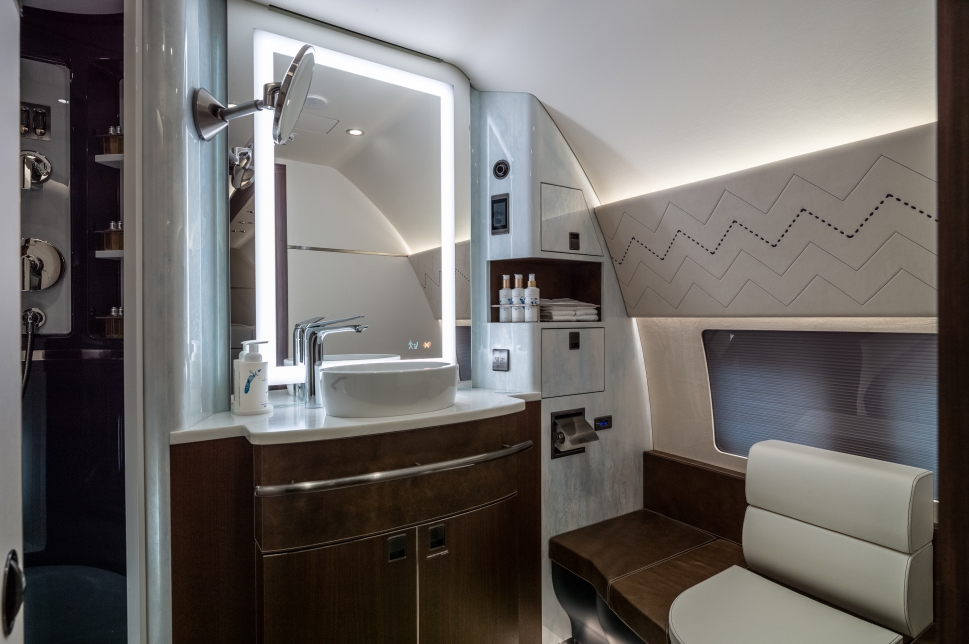 Successful Delivery
The process, from inception of the aircraft into Fokker through to its completed delivery to the client, lasted just over 12 months, and the aircraft is now fully operational with the national flag carrier KLM; another process organized by ALTEA given it was required to oversee the handover by the Government to the operator.
All in all this process-driven project (with its peculiarities of EU tender, turnkey and public scrutiny) was a success, much of it down to ALTEA conducting the collaborative team of Boeing BBJ, Fokker Techniek and its enthusiastic supply chain with the customer.
“Was the process as smooth and as simple as appears?,” Dunlop muses. “Absolutely not – there are always hurdles and major challenges. Would we do it all again? Absolutely – and we’d happily all start over tomorrow.”
More information from www.altea-aero.com