In today’s challenging marketplace, aviation professionals are looking for new avenues for their management, operational or brokering services. Ken Elliott explores the unique and potentially rewarding arena of Special Use aircraft. 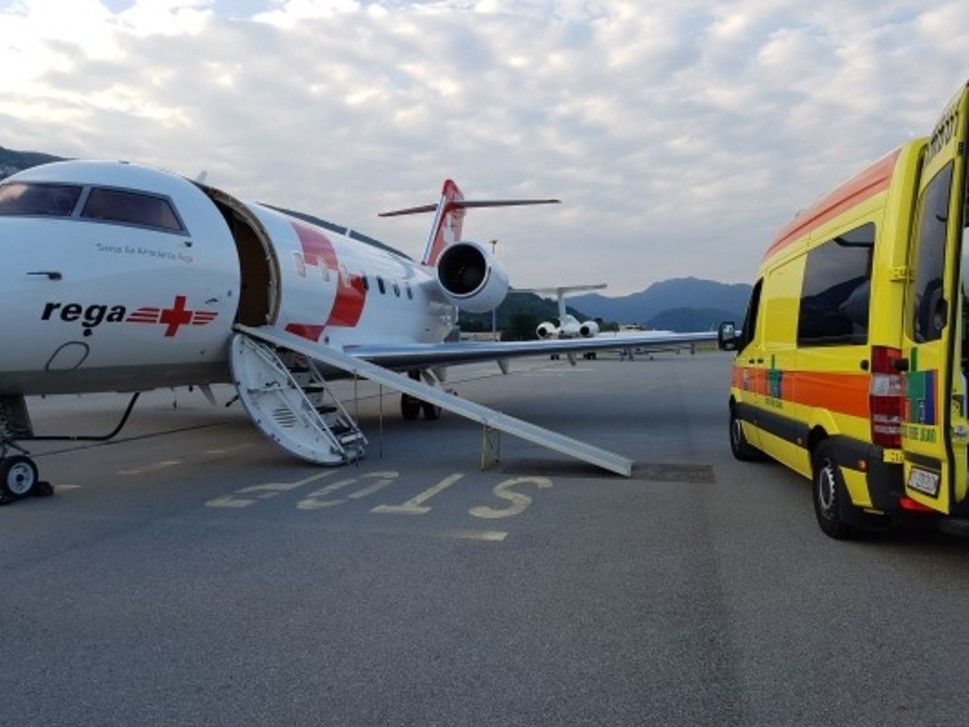 In today’s challenging marketplace, aviation professionals are looking for new avenues for their management, operational or brokering services. Ken Elliott explores the unique and potentially rewarding arena of Special Use aircraft.

One could argue that many aircraft operate in a manner often construed as ‘Special Missions’. As a term, Special Missions tends to have military connotations and yet nothing could be further from reality. This article will help you understand the technology, integration and advances of aircraft avionics and equipage associated with Special Missions (SM), with a review of SM aircraft, roles, exporting and considerations.

Special Missions covers a wide spectrum of aviation activity—activity that will take you down pathways you may never have previously explored where familiar aircraft are hardly recognizable, systems come with exotic code names, equipment operates in exotic frequency bands, throughout extreme conditions, and you deal with companies that operate to completely different business models.

Looking for Special Mission usage may open a new arena of commercial endeavor for your business aircraft.

Despite the mystery of it all, however, commonly known business and GA aircraft are being utilized in this way more and more. Today, the Special Missions discussion is a relevant topic to the regular commercial transport environment.

Trying to define SM could be very limiting and not do justice to its scope. However, one way to attempt a definition is to describe operations where an aircraft is either specifically designed for SM or, as is often the case, modified for a purpose beyond its primary intended use. For Business and General Aviation there are two existing uses of an aircraft; the transport of passengers and the carriage of goods. Today we see many examples of these aircraft being adopted for a third use in SM, while for helicopters, the separation of transport and SM activity is less clear.

In simplistic terms, the SM aircraft is doing something additional to simply flying in the most efficient manner between multiple airports. By using flight management systems operating with complex recurring flight patterns, the aircraft may be reliably removed from direct flights between airports and predictably complete SM profiles. Alternately, a SM aircraft, especially the helicopter, will fly away from airports to conduct operations such as medevac or line inspection.

Another factor that is blurring the demarcation between transport and SM is the configuration of a single aircraft for both uses. This may be to operate in a full-time multi-mode capacity, accomplishing both roles simultaneously, or via a rapid switch-out of the interior and SM pallet, operating in different modes sequentially.

There is a surprisingly large variety of aircraft types involved in some form of SM; it could be said that just about any aircraft can be utilized for a SM operation. So as not to boil the ocean with an exhaustive list, Table 1A through C (depicted in Figure A) provide examples of SM platforms, based on well-known Business and General Aviation aircraft and Tables 1D and E provide examples of purpose built SM platforms, designed and deployed from scratch for that reason. 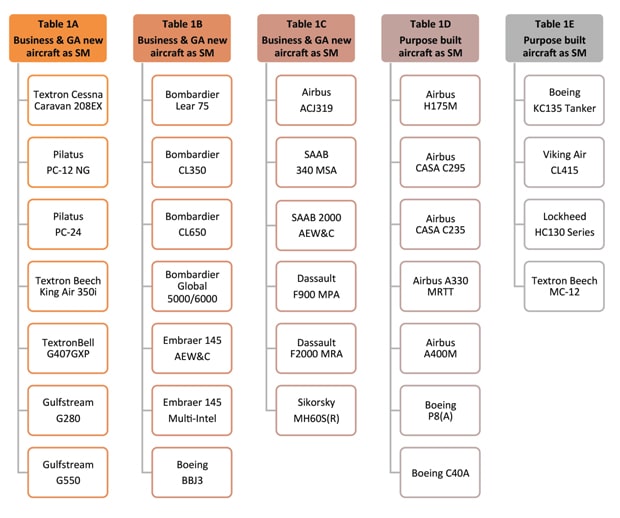 There is some crossover between upgraded and purpose-built, in that a number of upgraded aircraft are so heavily modified that they may as well be purpose-built. (The list does not include UAVs, which would serve to create a complete SM topic of its own.) Typically, all the major OEMs have SM programs, involving either custom-built or modified versions of their standard platforms found in the commercial environment.

If a viable request comes along for an existing production model of a commercial platform, a new version of the existing platform will emerge and will either be designated with a sequence of letters after its existing model name or a whole new model code name will be provided. It can be assumed, therefore, that the vast majority of purpose-built and upgraded SM aircraft were initiated by a bid that was won for one or other Government-related contract.

The list of individual SM roles is almost as long as the types and models of aircraft deployed. Roles may range from the simple to complex and from under $100k to well over $20m in outfitting costs. While complexity can be expected to increase with aircraft size and cost, some smaller aircraft can be loaded with SM equipment making them equally as complex as their larger cousins.

When planning a single aircraft for multi-role activity, it is important to consider open architecture in the design. This allows systems to be removed and added, enabling flexibility and adaptability to changing threat targets and providing for technology improvements.

From the aircraft’s structural perspective, the design could be based on provisions and removable pallets. Each pallet will allow the aircraft to perform a different role or mode of operation. Especially when used for intelligence-gathering, there are several modes of intelligence - from images to signals - but it may not be necessary to cater for all the modes and carry the full payload weight for every flight.

It is advisable to consider a cargo-style door for multi-role activity, allowing easy switch out of pallets and swapping between transport and special operations.

Unfortunately, unless you are a member of the distinctive SM club, the acronyms and ‘glossary of terms’ used to describe the various roles undertaken, may be very confusing. So while Figure B, below, spells out various roles performed, each one can be identified by a short form acronym. 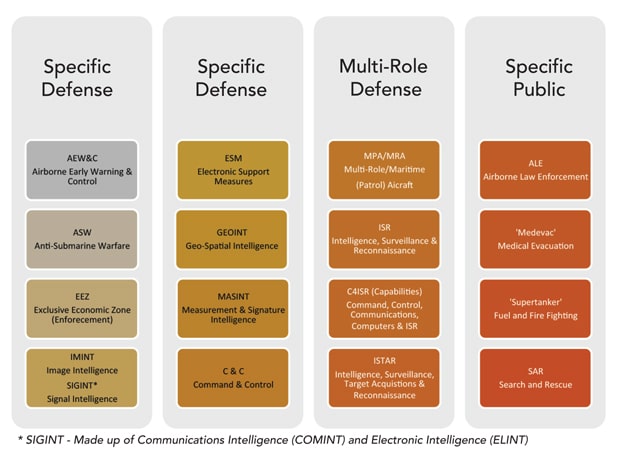 Additionally, the specific public acronym of VIP is extended to VVIP (with an extra ‘very’ inserted), to apply to government transport aircraft that could be presidential and, in turn, will imply equipage to include SM protection and communication.

Returning to the SM roles themselves, there are four broad categories in which they may be grouped:

The last category can be a public service provided by an individual or private group and would, for example, include a hospital corporation with its own medevac platform(s).

Noticeably absent from the aircraft platforms (and not part of the Business and General Aviation collection) are fighter aircraft. They fulfil the broad category of Munitions Military. However, some non-fighter jets carry limited munitions (flares, for example, considered a munition). The broad category of Light Military allows for a limited provision of munitions, in protective support of the primary mission and not in an attack capacity.

ITAR are a set of very strict export rules that send companies into a tailspin and keep many from even trying to penetrate the SM arena. In the world of ITAR, arms are not necessarily weapons. In fact, most of the ITAR regulations apply to equipment that is not deployed for an attack.

Invoking ITAR rules, the US Government sees the need to control the export of goods and services (including personnel visits, manuals, documents and software), as well as equipment and material, that could be used to facilitate the use of weapons, or provide an intellectual advantage to countries that are considered to be in the opposing camp.

The key areas to understand about ITAR are:

More recently, the US government has made it easier for SM’s items and data to be exported by expanding the use of the Commerce Control List (CCL) that controls commercial (as opposed to military or munitions) exports. By easing up on the degree of control necessary for items that are not Significant Military Equipment (SME) or highly sensitive, the government was able to move a large number of transactions to the less burdensome processes of the US Department of Commerce.

The latter has a presence in a number of US major cities and is ready to assist in export enquiries. A key in determining whether an export license is needed from the Department of Commerce is knowing whether the item you intend to export has a specific Export Control Classification Number (ECCN). The ECCN is an alpha-numeric code (e.g., 4BA005) that describes the item and its licensing requirements. Remember the license can be for anything, ranging from a minor part to a complete aircraft.

Exporting rules exist in most (if not all) countries, with the US model being a good baseline. Treaties also exist between nations, both in trade and in defense. These dramatically alter the degree of export control, depending on who is exporting to whom.

Figure C, below, offers a diagrammatic and simplistic representation of US export considerations for SM data and equipment. 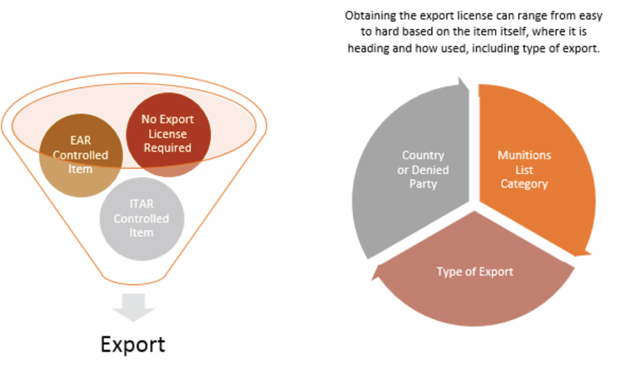 SM programs may be supported by aircraft that are managed and operated by specialist companies providing that type of service. Companies such as Dynamic Aviation, in the US, and Provincial Airlines (SM aircraft division), in Canada, are examples of specialized operators providing turnkey, wet and dry lease, or managed programs. Their aircraft are workhorses and may be modified to suit the mission.

However, at no time during the program does the end customer, government or agency, need to acquire, own and operate an aircraft on their own. This is a great way to cover for short-term mission requirements, or if the mission need is not part of the customer’s core business.

Pro-active intelligence gathering is important for nations to protect their interests and be prepared in advance of any threats to national security. Furthermore, intelligence is required in real time as potential ‘targets’ constantly change. Gathering the intelligence is one thing and processing it, also in real time, is another.

In multi-role missions, data are collected from multiple sensors and integrated to form a real time ‘picture’ of the target. Monitoring voice traffic from the target’s activity will help complete the ‘picture’.

Unfortunately, today’s threat targets are very adaptable and not, as a rule, originating from the same kind of security concerns that occurred during the Cold War. These scenarios are challenging the SM community and governments are scrambling to stay ahead of the eves droppers and hackers.

Many of our airports contain operators who reside somewhere in a remote corner and keep their hangar doors shut. Their activity is a matter for speculation. When seen, the aircraft may be adorned with pods and possess a complete antenna farm, looking like a candidate for a Star Wars movie.

All over the world operations are conducted by aviation concerns that may be identified as Special Missions. They operate from regular runways, lakes, hospital roofs, military bases, grass strips and desert ramps. Yet, they all have this in common; aircraft, equipment and crews, operating the same as any other flight department, with the express purpose of completing a specific role (or multiple roles) with an economic means to meet an intended function. They typically extend or change the role from strictly transport, to specialized missions.

With that in mind, future articles will delve into the aircraft, roles, operations, the market place and different perspectives of specialized services, including how they can impact flight department planning and operations.