Upsizing Your Jet? Here’s How to Manage the Process

What should you consider when upsizing your business jet? How can you avoid taking on costs you hadn't accounted for? David Wyndham shares details on the path to follow when exploring the possibility of buying a bigger aircraft...

David Wyndham highlights the steps to follow when exploring whether to upsize your business jet. Plan carefully to avoid complexities that can lead to disproportionately high costs...
First, you need to identify your aircraft needs before considering the candidate aircraft that will meet them. When buying a larger aircraft, the first objective is to make sure you’re not going to regret the decision later.
You should keep in mind that when you upsize your aircraft to an aircraft of a similar age (or newer), not only will you spend more but you’ll also increase the overall complexity and operating costs too. So it’s vital to establish exactly what the value of upsizing will be before you move forward.
What are the Benefits of Upsizing a Jet?
The benefits of upsizing your business jet typically fall into three main categories: comfort, range and seats. For example, if you upsized from a Mid-size Jet into a Large Cabin Jet, you could expect an increase in cabin height of between four and six inches, and a flat floor would make it significantly easier to walk around.
Upsizing your jet could also mean a larger lavatory and galley, additional passenger seats, more room for baggage, and an increase in range. While this all sounds highly beneficial, you must first clarify whether all these extras are a need or a want?
Examine Your Typical Trip Profile
When examining a client’s trip profile, I tend to look closely at the frequent city pairs and passenger loads, identifying the mission requirements the client’s current aircraft cannot fulfil.
Although an aircraft that flies 2,000nm with eight passengers cannot fly non-stop from Miami to Seattle, how often is that trip really necessary? Stopping for fuel in Kansas would add approximately an hour each way to the trip. If you flew that trip once per quarter, would the eight hours’ flight time saved annually with a larger jet be worth the cost of upsizing? In this scenario it may be less costly to utilize other options such as charter, jet cards and fractional ownership. 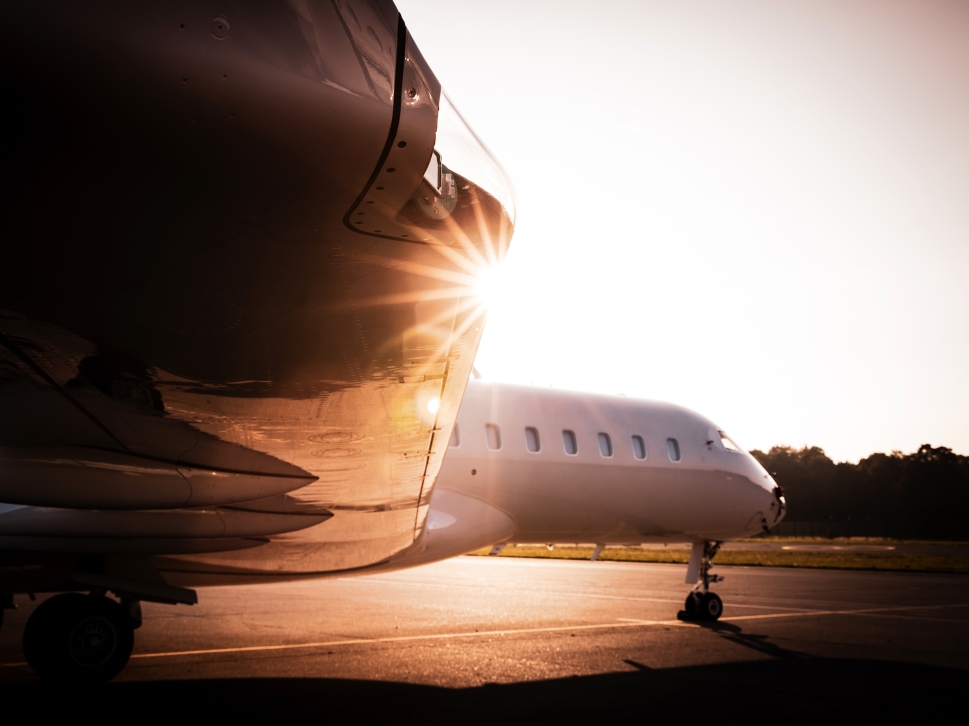 The determining factor when considering whether to upsize is the key mission for the aircraft. What is the one trip your aircraft must perform to be successful at its mission? If your Seattle-based company has just acquired a major operating location in Miami, then flights between those two cities are likely to become a key mission requirement as the frequency of the trips increases.
Justifying Increased Complexity and Operating Costs
Part of the mission analysis centers around the cost to upsize and the overall benefits of operating a larger aircraft. As noted above, with bigger jets come extra cost and complexity.
A larger aircraft may have more complex systems, and those systems will probably cost more to maintain. A larger aircraft will be heavier and require larger, more powerful engines which burn more fuel and will be more costly to maintain.
Don’t Bite off More Than you can Chew…
You must avoid spending more on a larger aircraft you can't afford to operate. But how can you tell what an aircraft will cost to operate in the first place?
Let’s imagine you upsize to a pre-owned Large Cabin Jet from a Mid-Size Jet. The initial upgrade requires an investment of $6m, and some of that outlay will be retained in the future value of the aircraft (but not all of it).
You need to keep in mind that the added variable operating costs will also increase, in this case as much as $500 per hour (which is $200,000 per year, based on 400 hours operations annually). And you could expect fixed costs to rise another $200,000 for additional training, insurance and salary increases for the pilots.
So, does the benefit equal or outweigh the extra cost (see Table A, below)? 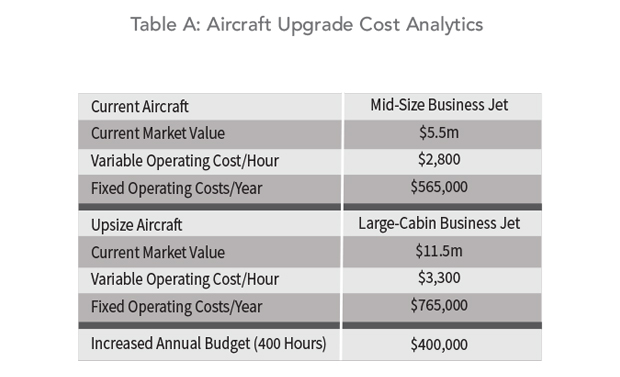 Upsizing Your Jet? Get it Right First Time
If you do decide to upsize, make sure you are scaling up enough. If you conclude there is significant value in acquiring a larger aircraft, then upsize enough to allow for further changes in the future.
To get that right requires a thorough plan. You may be seeking a larger aircraft to fly non-stop from Seattle to Miami with six passengers right now, but is there likely to be a need to carry 10 to 12 passengers on that trip in the future?

You should have an up-to-date aircraft needs analysis that discusses what the current and future aircraft requirements are, differentiating required and desired criteria.

Finally, don’t forget to measure the height of your hangar door. Imagine everything going smoothly until the day you take delivery and find the aircraft doesn’t quite fit. Your hangar door may be 24 feet vertically, but that won’t be much good if your new aircraft has a tail height of 26 feet. Likewise, the wingspan may not fit in a shared hangar.
Although it is rare, I have seen a new, larger aircraft sitting outside of the hangar because it doesn’t quite fit and there is no other hangar space available at the airport. This serves as yet another reminder to carefully consider all the other things that must also be upsized with your aircraft.
As with any acquisition, advanced planning is always necessary to ensure the larger aircraft is truly needed and the model you ultimately choose will offer value in return for the additional cost.
More information from www.conklindd.com

Aircraft Operating Costs: How to Measure Them
How to Build a Business Aircraft Acquisition Pla...
How to Buy a Jet Without Regret