The ticking clock inside the collective heads of your maintenance chief- avionics technician and chief pilot may not disturb your peace of mind at the moment - but the noise is likely to grow between now and the last day of 2019. Unless adapted- the company airplane stands to lose considerable access from January 1- 2020. 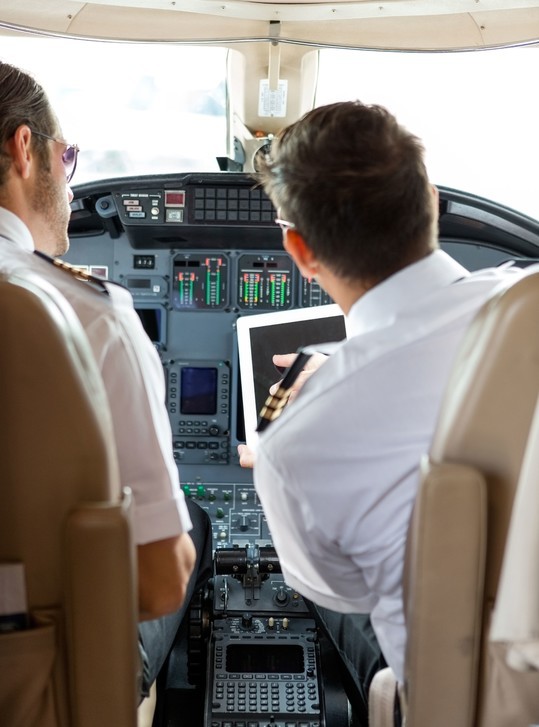 The ticking clock inside the collective heads of your maintenance chief- avionics technician and chief pilot may not disturb your peace of mind at the moment - but the noise is likely to grow between now and the last day of 2019. Unless adapted- the company airplane stands to lose considerable access from January 1- 2020.

That date marks the proscribed end of a decade-long grace period in which FAA wants operators to equip their aircraft with the core technology element of its NextGen Air Traffic Control advances - Automatic Dependent Surveillance-Broadcast (ADS-B). Time marches on and the agency shows no signs of easing up on its deadline. Not since it continues to advance installation and operation of the backbone network supporting ADS-B.

From perspectives outside FAA- agency policy constraints imposed on installation approvals serve to discourage early user adoption while actively hindering equipment development – driving up operator-cost expectations. The outside-the-agency consensus: FAA itself hurts efforts to sell NextGen and ADS-B to a clientele already wary of adaptation costs and skeptical of the actual benefits of both.

One Washington-based aviation industry insider described the impact of ADS-B thus: “It’s all very driven to shift the burden of surveillance to user-funded equipment and get out of paying for the expensive- maintenance-intensive system of radar transceivers – and with little measurable benefit for the General Aviation user but plenty of benefit for the FAA.”

In contrast- FAA continues to expand the ground-station backbone of ADS-B and as the network grows- access to its services expands along with some of the utility of components of ADS-B. Those who’ve equipped for the required ADS-B hardware using the most-popular option for satisfying part of the equipment mandate for FAR 23 gear can lay claim to increased instrument-condition access to a growing number of runway ends.

Adding to today’s skepticism about ADSB- options for FAR 25 turbine-powered aircraft remain stubbornly sparse- even though wider position-source options exist in some business- turbine hardware. Much pushback remains because for aircraft equipped with the past decade’s best equipment- ADS-B ads next to nothing to the aircraft’s capabilities.

“If you fly an old piston single- twin or turboprop that’s trailed the market in avionics upgrades-” explained one avionics shop owner- “a low-cost all-encompassing ADS-B package holds some definite allure. But if you’ve already got a collision-avoidance system and weather datalink- you probably don’t care that you can get them for free by going with components for ADS-B In. Otherwise- the minimum needed to get only the required ADS-B Out equipment is all you want- or need – and you really have no choice in technology if you fly above one-eight-zero.”

SATELLITE-BASED SURVEILLANCE
The way it operates almost exactly matches its name. ADS-B broadcasts the surveillance data on which FAA controllers depend to manage air traffic – and does so automatically. In other words- the FAA is moving away from depending on radar as its primary air-traffic surveillance technology.

Radar-based air-traffic surveillance bounces radio beams off aircraft with each rotation of the radar antenna- triggering a response from an airborne transponder. The radar computer notes the direction from which the transponder signal arrived while simultaneously converting into a distance measurement the time elapsed between the signal’s start outbound and the squawks arrival inbound; data from multiple sweeps let the computer also calculate speed and direction of flight.

An encoder supplies an altitude tag for the transponder squawk- a tag the ATC computer converts to an altitude report. This is all shown on controllers’ screens- updated as quickly as the antenna makes a 360-degree circuit and the ATC computers can complete their calculations and show a target – in high-density environments a few times a minute.

ADS-B Out- as required by the FAA’s 2010 rule- transforms the aircraft into the sole data supplier for everything ATC uses- including:

• Position: From either a WAAS GPS or another qualified navigation system- such as certain Inertial-Nav System (INS) and multi-sensor area navigators (RNAV)

• Altitude: From a blend of navigator and air-data input

• Direction: Provided by the navigation-data source or FMS (whether driven by WAAS GPS- RNAV- INS or a combination)

• Delivery: A transmitter on board the aircraft broadcasts the above data-points 60 to 100 times per second for receipt by ground-based transceivers networked together to feed the FAA’s control facilities and put the aircraft-sourced information on controllers’ screens – updated dozens of times a minute (or more).

The ground network through which the aircraft broadcasts get processed is more than two-thirds complete- and it’s on-target for full coverage by 2013- delivering coverage across the continent at 500 feet and up (lower in many areas).

So score one for the critics’ contention that ADS-B shifts delivery of ATC data to the individual aircraft. The rubric that the FAA is shifting to “satellite-based” air-traffic-surveillance stems largely from the promotion of WAAS GPS as the position-data source – and a requirement with which aircraft must comply to use much of the airspace.

The FAA is also holding out a carrot in the form of services delivered on so-called ADS-B In signals – signals which require equipment beyond ADS-B Out. To benefit from ADS-B In- the aircraft must have a receiver for the ADSB Out signals from other aircraft and the ground stations- as well as a multifunction display (MFD) or other screen to view those sweeteners known as Flight Information Service-Broadcast (FIS-B) and Traffic Information Service-Broadcast (TIS-B).

TIS-B does exactly what it describes: delivers position- speed- altitude and direction information on other participating traffic for display on that screen. FIS-B is wholly weather and flight-briefing oriented- pretty much like bringing The Weather Channel and Flight Service along for the ride.

But if the airplane already has weather-avoidance gear – particularly a lightning detector and satellite datalink weather – and a collision-avoidance or traffic-alert system- it’s got the ADS-B In sweeteners covered. And so we return to the issue of what gains pilots might get from ADS-B.

Remember: WAAS corrects receivers’ readings of normally very accurate GPS signals to a level within a few feet laterally and in altitude. The widespread acceptance of- and desire for WAAS GPS may give it the biggest boost it could have ever wanted. And it’s in embracing WAAS GPS that General Aviation aircraft operators stand to gain the biggest and most-immediate benefit from embracing ADS-B: operations in inclement weather.

THE WAAS ADVANTAGE
The Wide-Area Augmentation System: so far with the majority of ADS-B adapters embracing WAAS GPS as the onboard data source- it makes sense to examine the benefits here. Created to enhance the accuracy of the standard GPS signals – without the accuracy degrading Selective Availability turned on – WAAS employs a pair of geostationary satellites working with a network of about two-dozen ground stations.

The result: position accuracy to better than 4 meters – less than 15 feet laterally- under 15 feet vertically- with velocity calculated to within a fraction of a knot.

Activated nationally in 2003- WAAS GPS received an FAA performance standard in 2008 and today supports special WAAS LPV approaches exceeding 2-600 in number and growing at a rate of about 500 per year. LPV (Lateral Precision with Vertical guidance) at many airports provides guidance equivalent to the gold-standard Instrument Landing System (ILS) of Localizer and Glideslope.

It’s in access to these and other improved instrument approaches that ADS-B adapters may find their greatest benefits: access to those approaches. LPV approaches closely mimic the gold-standard ILS approach- with one huge difference. No ground-based ILS hardware is used. Instead- the GPS receiver itself generates its own localizer and glideslope paths based on the approach created and programmed into the navigator.

LPV approaches can provide minima down to 200 feet and a half mile if the airport equips itself with appropriate lighting and marking; 300-foot ceilings and a half-mile require less ground infrastructure. And for many of the other new WAAS GPS-based approaches- little to nothing at all is required aside from runway lights- end market lights- or such.

Additionally- WAAS GPS holds potential for some aircraft to qualify for operations using Required Navigation Performance (RNP) standards. RNP opens up arrivals and departures of complexity and dimensions unsupportable by most other navigation sensors – providing lower minima in many a terrain- or traffic-constrained situation.

THE STC-ONLY POLICY
AEA held two days of meeting in February- bringing together avionics makers- installation shops and sundry FAA officials to discuss a “policy guidance” from the FAA stating that all ADS-B installations must be approved by the agency through the acquisition of a STC.

That portends an STC for every airframeand- ADS-B-system combination- a far cry from today’s approval of avionics with most installations covered by field-approval rules. According to AEA- this interpretation – currently under discussion – makes all but impossible early adoption by the larger GA community- and much more expensive for those willing to proceed.

The AEA’s winter meeting opened up discussions to the FAA modifying that policy- according to agency sources - but so far- the policy remains in place. Stay tuned.

THE EQUIPMENT CONUNDRUM
Many of today’s leading-edge avionics packages come ‘ready to play’ with NextGen- at least as it pertains to the ADS-B Out mandate. The WAAS GPS navigators integral to them satisfy the position-data performance requirement- and many new Mode S transponders provide the Extended Squitter link and sport the inputs needed for the position data and altitude data.

Other options available include updating a Mode S transponder or acquiring a new ADSB compatible unit or the 978UAT that works. In fact- AEA vice president Ric Peri urges operators facing a transponder issue to install a new ADS-B compatible Mode S transponder rather than ignoring the issue and replacing a failed transponder with another Mode C or non-ADS-B capable Mode S unit. “They’ll be set to go when they’re ready- and in the long run save money-” Peri stressed.

Meanwhile- only a handful of 1090ES and 978UAT items are available for the bulk of FAR 23 aircraft and fewer are available for FAR 25 cockpits typical of today’s modern business turbine airplane. “We expect to see more options arrive- slowly- in the near future-” Peri explained.

The above few paragraphs- of course- covers only ADS-B Out needs. For those interested in the options available with ADS-B In- the selections are even thinner right now - in part because the FAA issued TSOs and rules covering only ADS-B Out.

Whether (and what) standards might be for ADS-B In solutions – such as 978 MHz receivers – aren’t stopping avionics makers from proceeding with new products- but the pace of development is below what would be expected if the FAA had dealt with the standard at the same time as ADS-B Out.

As it stands- only recently did the FAA start a working group to examine the need for standards for ADS-B In – so don’t look for anything new in TSOs any time soon. Meanwhile- the clocks keep ticking…

ADS-B OUT EQUIPMENT REQUIREMENTS:
• WAAS GPS navigator or performance equivalent: Stand-alone (blind)- integral to a single-box ADS-B system or a panel-mounted navigator;
• ADS-B Out Transmitter: Either a 978 MHz ADS-B stand-alone transmitter or UAT- a 1090ES Unit- stand-alone- or an ADS-B Capable Mode S Transponder; and
• Antenna.

ADS-B IN EQUIPMENT REQUIREMENTS:
(In addition to Out hardware) • 978 MHz ADS-B Receiver or 978 UAT: To receive the Out signals of other aircraft- as well as FIS-B and TIS-B data; or 1090ES also able to receive TIS-B; and • Display screen: To show FIS-B and TIS-B images and text. (Can be stand-alone- MFD or the screen of a GPS navigator.)