Recently- I chanced upon a heading that crossed that of an old friend: a professional aviator. Something about him seemed different as we visited at the airport coffee bar. As the young barista topped of our demitasse- the change hit me: she didn’t trip on- or step around his standard-issue pro-pilot chart case. 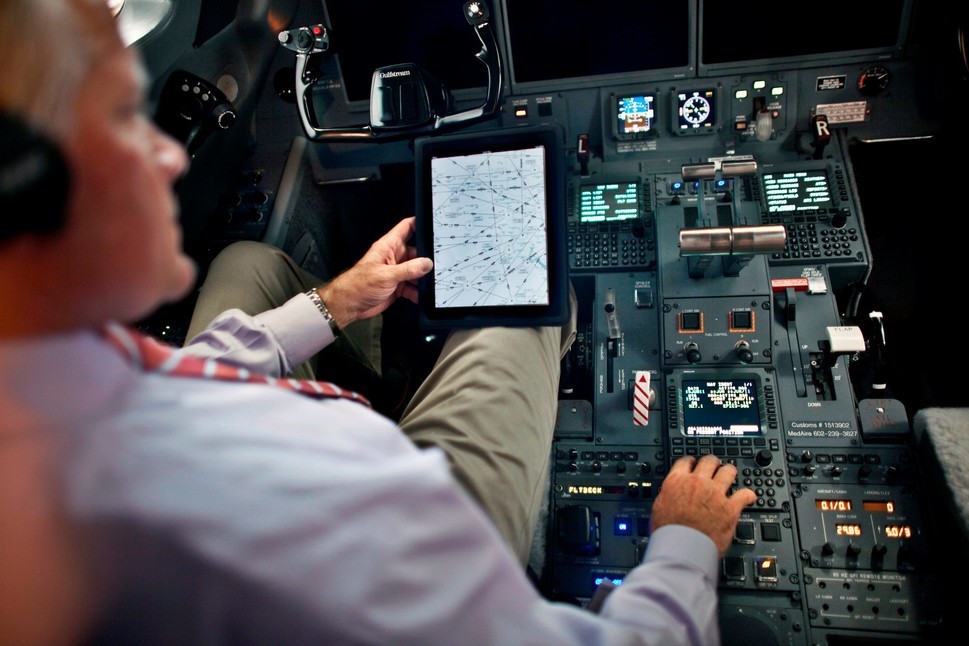 Recently- I chanced upon a heading that crossed that of an old friend: a professional aviator. Something about him seemed different as we visited at the airport coffee bar. As the young barista topped of our demitasse- the change hit me: she didn’t trip on- or step around his standard-issue pro-pilot chart case.

This once-indispensable- 40-pound badge of honor was nowhere in view. Instead he toted an average-size briefcase woefully too small to haul the thousands of pages of en route navigation charts and instrument-approach plates- facility directories- and flight planning tools standard in cockpits for decades.

When questioned about the missing bag he proudly hoisted from the briefcase a light- thin tablet computer. “This-” he said- waving the diminutive device- “is the replacement” – an Electronic Flight Bag.

He proudly fired-up the machine- tapped the screen a couple of times and there- in perfect clarity- was the Instrument Landing System approach procedure for my destination-airport: All the graphics- all the text- all the data – on a computer screen – and all legal. After years of drifting in that direction- the EFB is finally letting pilots go nearly paperless in their cockpits while dropping weight from their trips- streamlining their ability stay up-to- date on required paper- and bringing new functions to the cockpit.

THE EFB DEFINED
An Electronic Flight Bag can be almost any portable or installed device capable of delivering any- or all of a number of products: airport directory manuals; aircraft manuals and some required documents; air-navigation charts- approach plates- arrival and departure procedures; and airport taxi diagrams.

Questions about the legality of using them in cockpits hindered early acceptance until the Federal Aviation Administration issued Advisory Circular- AC 120-76A - an update to an earlier version: (http://www.airweb.faa.gov/Regulatory_and_Guidance_Library/rgAdvisoryCircular.nsf/0/b5de2a1cac2e1f7b86256ced00786888/$FILE/AC%20120-76A.pdf).

Specifically- Class 1 and Class 2 EFB devices are considered portable- uninstalled equipment- which do not need FAA approval; a Class 3 EFB is generally one that can connect to the aircraft and run approved software - and- as such- must be approved for use as a piece of avionics which can (and does) often include an installed Multifunction Display (MFD) running software to perform EFB functions.

The Class 3 EFB function of an installed MFD – playing the POH and checklists – is how many pilots first saw the potential for the paperless cockpit.

Digital versions are acceptable for the Pilot Operating Handbook- weight-and-balance document- navigation charts- approach plates- departure and arrival procedures and airport taxi diagrams- as long as a provision is made to assure they can be accessed even without aircraft power.

The paper still required by the FAA could be folded and stored in a business-size envelope – if not required to be visible - includes: the aircraft’s airworthiness certificate- aircraft registration and (for aircraft flying outside U.S. territorial boundaries) a Federal Communications Commission radio-station license.

Throughout that panel transition- paper remained the chart solution. Then the 1990s brought a growth in notebook (or laptop) computers. A few pilots first adopted available software to run weight-and-balance calculations and flight plans on their notebook computers; others loaded aircraft check lists- POH and other documents. Slowly- sources emerged offering scanned charts- then approach plates; the FAA also digitized them.

Over time the options gained appeal – but not a lot of momentum or acceptance; lacking the FAA’s blessing as legal replacements for paper- the EFB potential foundered. By the end of the 1990s- the FAA was working on the standards and classifications that exist today- while the industry began producing options in prodigious numbers.

While use among most Part 91 operators required no FAA approval- FAA approval is needed for FAR 121 and FAR 135 operations. Enter NetJets’ subsidiary Executive Jet Management (EJM). In early March EJM received FAA approval to use Jeppesen’s Mobile TC (Terminal Charts) for Apple’s iPad as a sole reference for charts.

Three months of intensive testing preceded approval- including testing to assure the device produced no electronic interference on the flight decks- and for rapid-decompression at altitudes to FL510. Approval for Class 2 use (mounted to pilot’s knee or aircraft mount- but not connected to the aircraft) is in the works.

The providers of other solutions are expected to follow similar paths- seeking approval in commercial operations for the Class 1 and Class 2 status. In the meantime- the door is already wide open for FAR 91 operations of the type that dominate business operations. And as a legal replacement for all the paper once required legally- the EFB is showing itself to often be far less expensive to maintain than paper-based cockpits.

CLOSING THE DIGITAL LOOP
The humblest role of all in the cockpit falls to the maps and diagrams pilots use to navigate- plan flights- thread the aerial needle of a Standard Instrument Departure (SID) fly a Standard Terminal Arrival (STAR) to arrive via an Instrument Landing System (ILS) procedure. The Federal Aviation Regulations (FARs) require pilots to have on board the charts- plates and procedures needed to conduct the flight – including alternative airports.

Maintaining the charts and filing changes and updates on the FAA’s 28-day charting cycle is time-consuming; paying for the subscriptions alone can run to hundreds of dollars per year- per pilot.

Chart provider Jeppesen was using up to a billion pieces of paper a year- according to the statements of Mark Van Tine- president and CEO. “The world is going digital; why do we still use paper?” he asked at a recent conference. “We need to move to a digital world.”

Thanks to the emergence of new options- a compliant FAA- and a plethora of hardware solutions- aviation is quickly moving digital with various solutions labeled “EFB.”

BOUNTIFUL REASONS TO SWITCH
Two factors nudge most pilots to abandon paper and adopt an EFB:

• First- EFB chart packages are available that cost half- to two-thirds less than paper.
• Second- the update process: leafing through all those plate books- removing the out-of-date- inserting the updates – it’s slow- time-consuming- and if you don’t keep up it can leave you short of a needed plate or en route chart.

Updating most EFBs involves a process now familiar to millions of computer users: log into a website- download the update to a storage card- put the card in the EFB and the software automatically will replace only the documents with changes- and file them in the correct place.

Some devices can be connected directly to the computer- so the download routes straight to the EFB – although yours may be different. Before fully embracing the Digital- though- here follow a few additional thoughts.

THE WISE EFB TRANSITION
As with any new tool introduced into the cockpit- the EFB imposes some conditions- and demands some training to work as an effective- safe- partner with the pilot. At its maximum potential- an EFB with the right software and hardware can even serve as an emergency navigation system. But buying into an EFB should be based on use- need- and what works for your operation and crew.

In terms of hardware- avoid devices using mechanical hard drives for data storage; at cabin altitudes they can malfunction- or even overheat. Go with solid-state memory. Obviously- a business-turbine operator will need an EFB solution that includes the following minimum items:

Take into consideration any additional functions a pilot may need- too: weather datalink is popular because it’s an independent look comprised of radar composites from across the continent. The service usually includes text products: Terminal Aerodrome Forecasts (TAF)- Aviation Routine Weather Reports (METARS)- as well as alerts and Notices to Airmen (NOTAM)- lightning-strike graphics- and severe-weather updates.

Remember: with some EFBs- an add-on satellite receiver may be required. If the crew believes it helpful- some EFB solutions work with a GPS receiver so that the charts depict geo-reference (that is- they always show the airplane accurately on the chart or plate selected). Geo-referencing can be a lifesaver in the event of a failure of the aircraft’s primary avionics. A screen about as large as an approach plate is also helpful- keeping the whole plate in view without scrolling.

Once you’ve made your choice- though- does that make you ready to go paperless?

SOLUTION TO MATCH THE NEEDS
Some pilots use Jeppesen products; others are as happy with the old NACO products. Either way- there are products that fit your wants and needs. Jeppesen was among the companies to hitch up to the iPad momentum with a charting product designed specifically for the device. Jeppesen unveiled its iPad charts package at AirVenture 2010 - a strategic location.

Held each July in Oshkosh- Wisconsin- the world’s largest consumer show for private pilots is the official annual convention of the Experimental Aircraft Association. In six months- more than 45-000 people downloaded the Jeppesen iPad application- according to Van Tine- President & CEO.

Tens of thousands of other pilots use other solutions- some that also employ the nearly ubiquitous iPad as the platform. For example- the folks at AirGuide Publications – known to generations of pilots for their three-volume U.S. Flight Guide -- produce EFB solutions for the iPad as well as for a number of other electronic readers and tablet computers (such as Kindle DX- and a number of Sony PRS series products).

The company’s iPad products offered include a WiFi (wireless) WAAS GPS to let the iPad charts and plates geo-reference as you fly. WingsX Pro7 software also brings EFB functionality to the iPad.

Honeywell makes a line of purpose-built EFB products under the AV8OR label - a few of which combine the VFR and IFR chart functions with access to a daily updateable facilities guide and fuel-finder. The AV8OR Ace offers an approach plate-size touch screen with full color- an integral WAAS GPS – to geo-reference charts and plates – while also serving as a street-navigation GPS and MP3 music player. Add a XM Weather satellite module and the AV8OR can also display live Doppler weather radar.

Finally- Garmin’s tablet-size 695 and 696 also does the weather- charts and plates - and is supported by a number of mounting solutions to keep it from floating free. There are hosts of other options that have not been featured in this article- so what’s stopping you from choosing an EFB?

EFB TRANSITION TRAINING:
It is never a smart idea to open the box of your new EFB and jump into the cockpit to fly. So say the EFB makers- the National Transportation Safety Board and several other aviation-safety organizations.

The ‘load-and-go’ attitude shows up when pilots cite their lack of familiarity with a new (or otherwise) EFB when self-reporting numerous deviations- missed waypoints- failure to follow clearances or assigned-altitude busts. With this in mind- here are a few tips on getting started:

• Don’t even take the EFB to the airport until you know how to turn it on or off- how long it takes to boot up- and- most importantly- how to use the interface.

• Don’t use the EFB for flying until you’ve practiced using the interface to leave one graphic and find the next in the fewest possible keystrokes or button pushes.

• Don’t fly without the old charts until you’ve flown – with a safety pilot – using the device in the cockpit. Watch for any issues with installed electronics during this period.

• Once comfortable and competent with the device- post a notice on the bulletin board of the pilot’s lounge: “Chart Bag for Sale; last cycles charts included.”

At first- you may feel like you’re missing something without all of the cockpit paperwork. Soon you will realize the only thing you are missing is that old- tired back from hauling the papers around with you.