Dave Higon discusses what's popular in the refurbishment history at a time that the average ownership period for a business aircraft is growing. 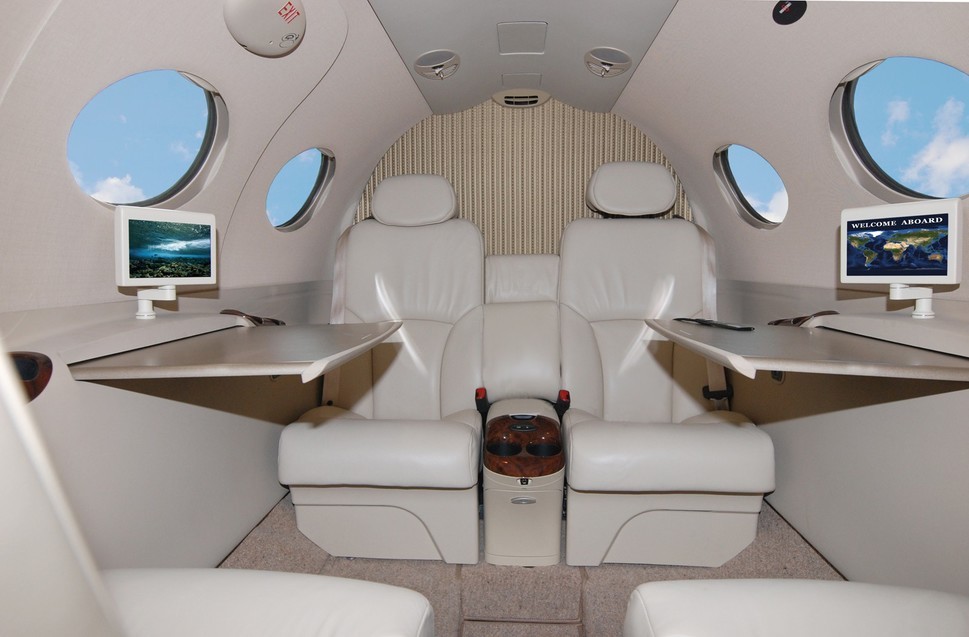 According to Al Shogren, MRO Modification Sales Manager for Jet Aviation St. Louis, “you can get pretty much exactly what you want in a good airplane and never feel its age – without getting close to the cost of a comparable new aircraft.” Hosts of current and former owners and operators agree.
The depth of the ‘For Sale’ pre-owned fleet and increasing sales are contributing to significant growth for companies like Jet Aviation, UK-based MAC Interiors, and a galaxy of specialized and broad-discipline companies with lines providing paint and transparency services on the outside, and on the interiors inside. But what commands the most interest these days? From the perspectives of several companies, cabin and paint refurbishment and restoration, and in-flight connectivity equipment that is often installed under the same work package.

An informal (highly unscientific) survey of several dozen pilots yielded an array of answers to the question, “what upgrades lead your wish list?” These were, for the most part, pilots who fly aircraft that others own. But the various answers followed similar lines for both owner/pilots and pilots who flew for their jobs.
Owners generated slightly broader responses; they weighed various cabin accoutrements equally with cockpit goodies. But where the lines among pilots, owners and owner/pilots seemed to cross, paint and interiors topped most lists.

“It's been getting busier and busier,” Shogren said, “and it's looking like it's going to be even busier in 2015.” (That's the image painted across the market by MRO operations on both sides of the Atlantic.) Refurbishments are a big, busy, expanding market partly fueled by broad options among pre-owned business-turbine aircraft and partly by a competitive and more-flexible market for aircraft finance. Many of the finance options include refurbishing and upgrading. The combination is fueling some welcome growth in an already ripening business aircraft services sector.

A Big Picture of a Big Market

The global fleet of business and commercial-turbine aircraft numbers more than 55,000; it stood at 53,000 in 2012 (according to the 2013 ‘Global MRO Market Economic Assessment Report’ from the Aeronautical Repair Station Association. That 53,000 represented two-thirds of all turbine-powered business and commercial aircraft in the world. Commercial operators account for two thirds of the estimated $65 billion MRO market for these aircraft.

The biggest driver of maintenance – Flight Hours - remains the same for both business and commercial operators. The big difference stems from the disparity in the demands made on the aircraft. Where the commercial aircraft typically flies 2,500 hours annually, the business-turbine aircraft averages closer to 370 hours annually.

Regardless of this difference, flight cycles and human through-put produce wear and tear; technologies advance in systems from tip to tail; and in a majority of instances, keeping the aircraft looking good, outside and inside, is SOP. The interior, of course, is where the passengers fly – creating the wear that tears down the interior…

Not too many years ago a single-engine propjet operator invited some business associates to fly with him to a trade show of common interest. He recalled their reactions to the entire experience: from boarding the aircraft – “We didn't even have to take off our shoes!” one passenger exclaimed – baggage handling, and the shorter-than-imagined total trip time.

“I'd be cooling my heels waiting on my second flight – and we're here! Already!” But the owner/pilot's favorite recollection was the group's reaction to his airplane. “It's almost 20 years old, but they thought it was new,” he smiled. “That’s partly because it looked new, but mostly because it smelled new. They didn't believe me when I told them the airplane was nearly 20 and that the interior was refurbished five years before.”

Surrey, UK-based MAC Interiors sees plenty of interior work to grow on. Offering what the company calls a “concept to completion” approach, MAC covers the work needs with designers, engineers, electrical experts, master craftsmen in cabinet construction and certified staff to handle the installation work – all under one company roof.

Graham Hutchins, Marketing Manager, MAC Interiors outlines that the company handles a significant amount of refurbishment and retrofit work on commercial and business- turbine aircraft and helicopters, encompassing everything from lavatories, galleys, seating, stowages, and, of course, VIP interiors adapted to a wide variety of commercial aircraft, from light helicopters to Airbus A380 aircraft. Indeed, VIP interiors for bizliners stands among MAC's strengths, and what is most in-demand at MAC runs to the need of the individual clients – but with the same ultimate goal: “A sharp-looking, comfortable, functional aircraft interior suited to the work conducted there.”
Among the functionality demands popular today is the increasingly broad array of options available to bring in-flight connectivity to an aircraft cabin built before such systems were commonly available. Cabin accoutrements that are high on today's upgrade lists are systems that bring both Internet connectivity and satellite communications – and, where viable, In-Flight Entertainment (IFE). A number of interior shops noted that they're seeing more demand from smaller mid-cabin and light jets for such equipment, thanks to options emerging that are small and light enough to bring In-Flight Connectivity and IFE to the users.

But, of course, the needs for aircraft refurbishing and upgrading go well beyond the back cabin users – particularly for aircraft with a few years on them and systems designed in another century.

In some instances, Jet Aviation's Al Shogren noted, work packages go beyond the main cabin to the cockpit; other MRO insiders noted the savings options from considering engine upgrades where a path exists. “It just makes sense,” Shogren said, “to go with newer engine options where the costs are competitive.”

In most cases where an option exists, the costs of the engine can hover near the price point of the original – but reward the operator with increased performance on less fuel per horsepower while delivering higher speeds. Coupled with reduced maintenance needs you have a perfect recipe for reduced cost-permile, and it's things like this that will make the CFO smile.

When refurb packages cross multiple lines, the owner has the option of shopping each individual element, finding a company to oversee the work (at several specialty shops), or, taking the route many would consider the most efficient: a shop capable of handling the entire work package. Such shops are common enough to give operators some room to compare, but not so common that any all-encompassing shop can handle any airframe. Many of the all-capabilities shops focus on a limited number of airframes; Jet Aviation is one with a broad palette, if you will.

“We've been pretty steady with all areas,” Shogren elaborated, referencing Jet Aviation St. Louis' in-house paint, interior, cabinetry and other sub-segments. “Actually it's been increasing over the past year.” Shogren attributes the growth at Jet Aviation St. Louis – and in general, throughout the field – to the improving business client and an up-tick in pre-owned aircraft sales. “Activity in the used airplane market has picked up and people are buying,” Shogren said. “They often buy already committed to the work they want the aircraft to get.”

Shogren noted that Jet Aviation St. Louis doesn't do a lot of major cockpit changes, “but we do plenty inside the cabin – including standby systems, power management and inflight connectivity. That's really hot right now; more so than hi-definition entertainment monitors. You can do a lot with these airplanes without getting close to the costs of a new one.

“The way most people use these airplanes is to buy, upgrade, fly for five or 10 years, then upgrade again, so they never really feel the age of the aircraft,” Shogren explained. The sole sacrifice in this approach is that of not spending more than needed to gain the performance needed. And the availability of pre-owned stock, and the quality of the upgrades is making it possible to fly ‘like-new’ for less than half the price.”

If there's a speed bump in the path of this expansion it is meeting demand. “Last year, we were definitely busy,” said Shogren. “We're up this year and projecting to be up again next year.”

Few slots (single digits in most cases) remain for paint and interior-cabinetry work through the end of 2014. “The paint booth is sold out except for two slots through 2014,” Shogren said. “Refurb, cabinet work, and avionics are all ‘tapped out’ and getting busier and busier all the way through next year.”
That message was echoed by most shops willing to share their outlooks. But they'll be happy to take your call. Said Shogren, “A couple of years ago we were competing for every job. But the market has got to a point where most of the work comes to us. The phones are ringing and the people are interested. The competition is still tough – but
there's a growing amount of work coming. But we'll find a way to make it work.”